SOFIA IN THE 1990S | VAGABOND Skip to main content

After several years of hectic building and reconstruction – including new Roman ruins and roads that need repairing only two weeks after they have been inaugurated by the prime minister – Sofia looks transformed. In many ways it is. Chain stores and shopping malls dominate the urban landscape, foreign tourists fill the downtown area, and Western coffee culture is replacing the older, Balkan one. There is a metro, and the graffiti are much more sophisticated than the erstwhile political or emotional slogans scribbled on walls. McDonalds is not a novelty and sushi has gone out of fashion.

But how much has Sofia changed since Bulgaria emerged from 45 years of Communism and plunged into its own highly Balkanised version of democracy? The photographs in this portfolio, taken in the second half of the 1990s, provide some answers. Part reportage and part meditation on the transformation of a former Communist society, they show a grey Sofia, full of old cars and old people, many of them begging or selling home-produce. Young people, too, look poor and somewhat bewildered by the presence of a photographer interested in them. Blogs with street photos were then unheard of.

Compared to the Sofia of today, Sofia of the 1990s looks grimmer, colder and more inhospitable, but there is something in the people in the streets that challenges this perception. Look closely, and you will spot energy and optimism even on the faces of the down-at-heel street sellers, a spark that today is almost missing from Sofianites. The sense that things will improve, sooner rather than later, prevailed in Bulgaria between its domestic economic crisis of 1996-1997 and the world crisis of 2008. In this short timespan, Bulgarians believed in liberal democracy. Thousands celebrated the 10th anniversary of the fall of Communism. US president Bill Clinton came to visit. The general notion was that it was only a matter of years until Bulgaria would be "like the West": prosperous and corruption-free, a haven of free initiative and free media.

Some of these hopes materialised, some did not. Sofia in the 1990s may have been poorer, but it was more optimistic. Things were yet to happen. 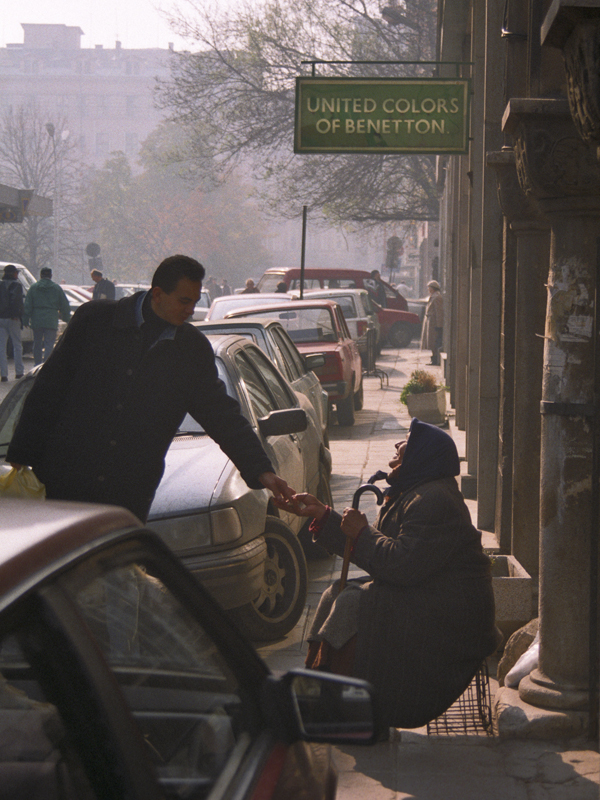 Parking in Central Sofia was similar to 2015 except the City Council had not started collecting parking fees and cars were not towed away. Beggars were the same 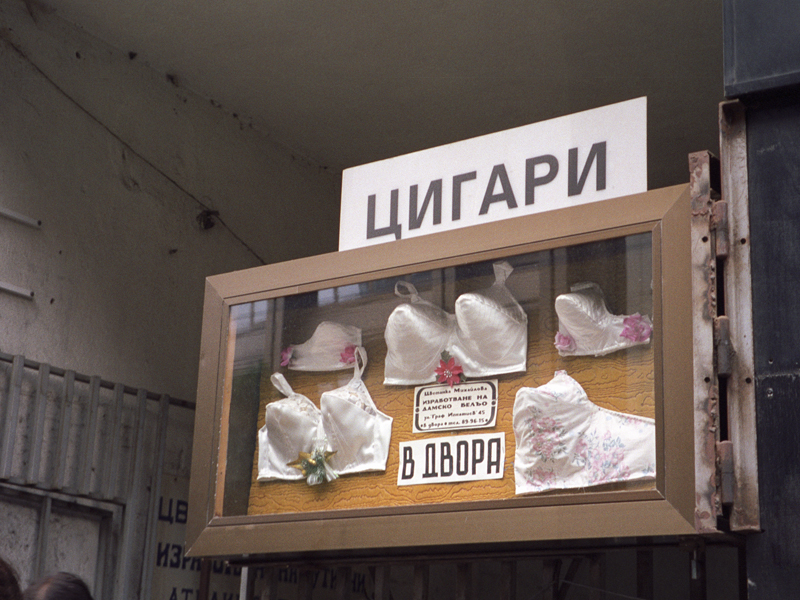 Central Sofia was still full of small-time artisan shops like this one near the intersection of Vasil Levski Boulevard and Graf Ignatiev Street, selling cigarettes and hand-made brassieres 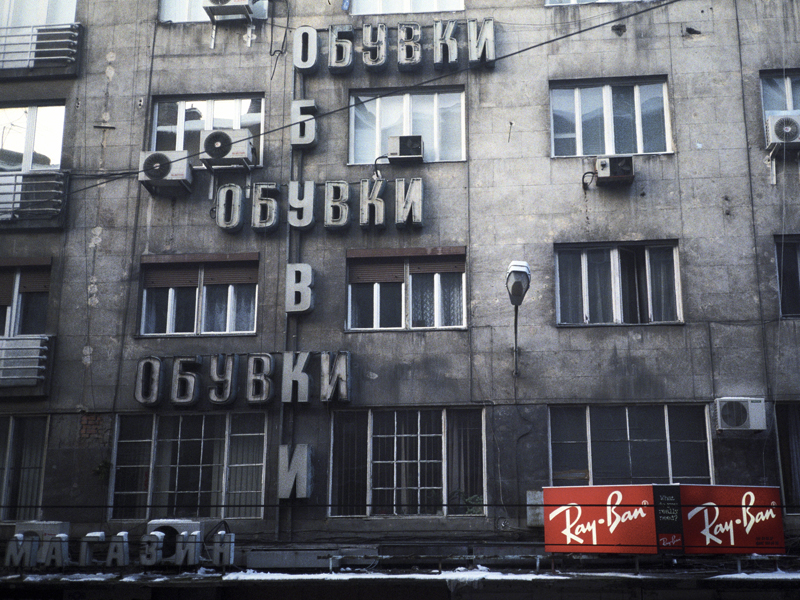 Western brands slowly made their way into Bulgaria in the 1990s 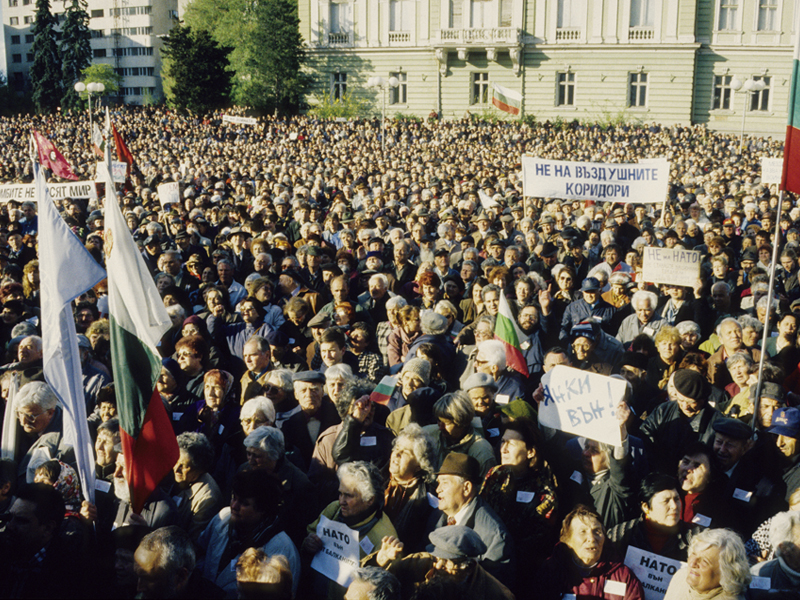 The leader of the BSP, Georgi Parvanov, was opposed to Bulgaria granting NATO an air corridor during the 1999 Kosovo war. Many of his sympathisers intoned, carrying placards saying "Yankees Out!" Bulgaria became a full member of NATO in 2003. Parvanov had become president thе previous year, and would hold the post until 2012 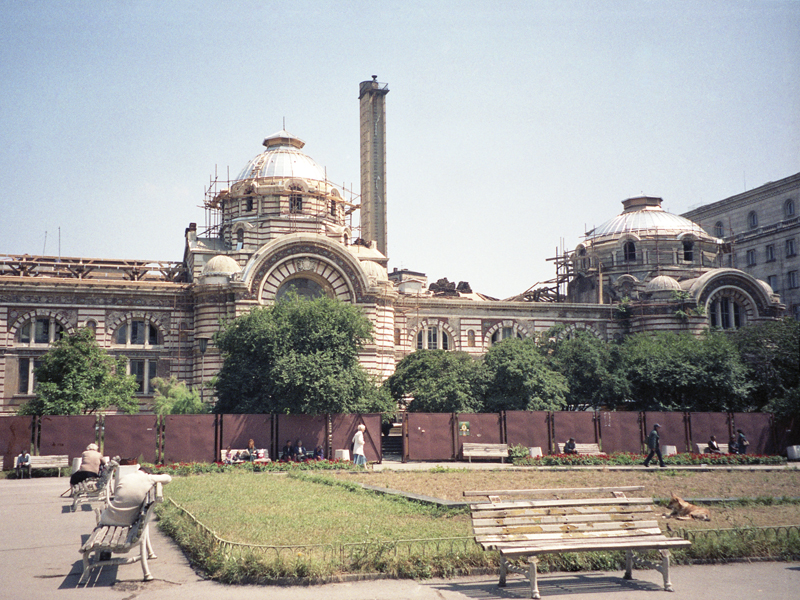 The Sofia Central Bath, behind the city's mosque, also stood in ruins through the 1990s. It was so dilapidated that it was cordoned off for fear it could collapse. In the 2000s it was restored and now houses the Old Sofia Museum 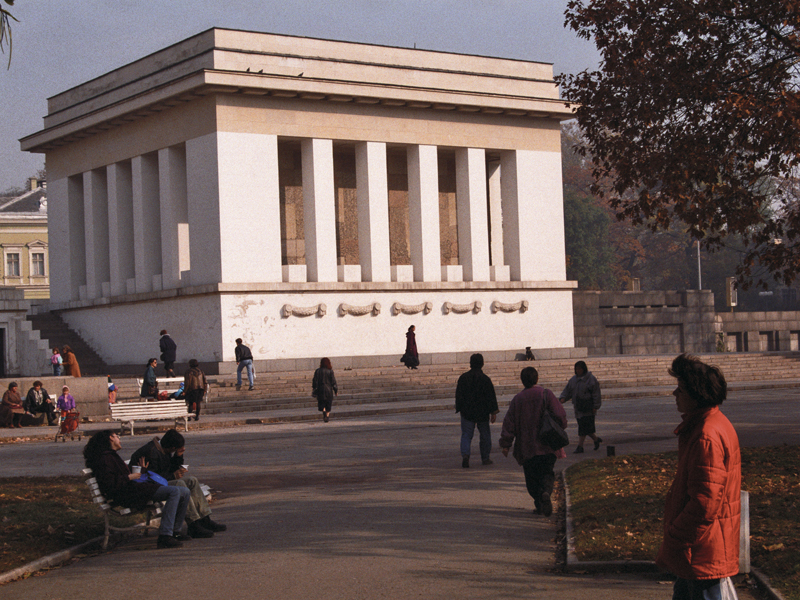 Visitors to Sofia in 2015 will find it hard to believe, but the empty space in front of the National Art Gallery was occupied by this monumental structure which was in fact... a tomb. The corpse of Bulgaria's Stalinist dictator, Georgi Dimitrov, lay mummified in it. The "mausoleum" was abandoned after the collapse of Communism. Through the 1990s it was used alternatively as a public toilet, a Socialist Party rallying ground, and an opera stage set until it was demolished in the summer of 1999 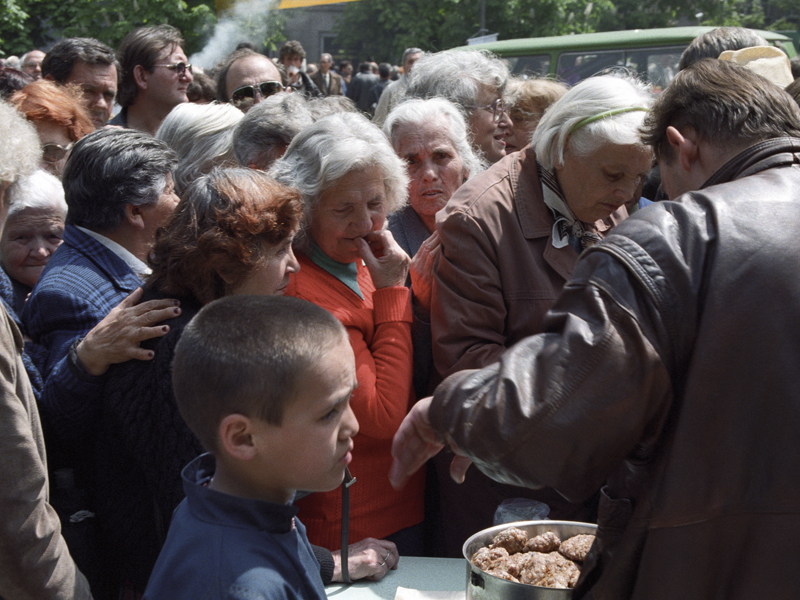 The BSP, or Bulgarian Socialist Party, provided its supporters with free kebapcheta and even beer ahead of elections 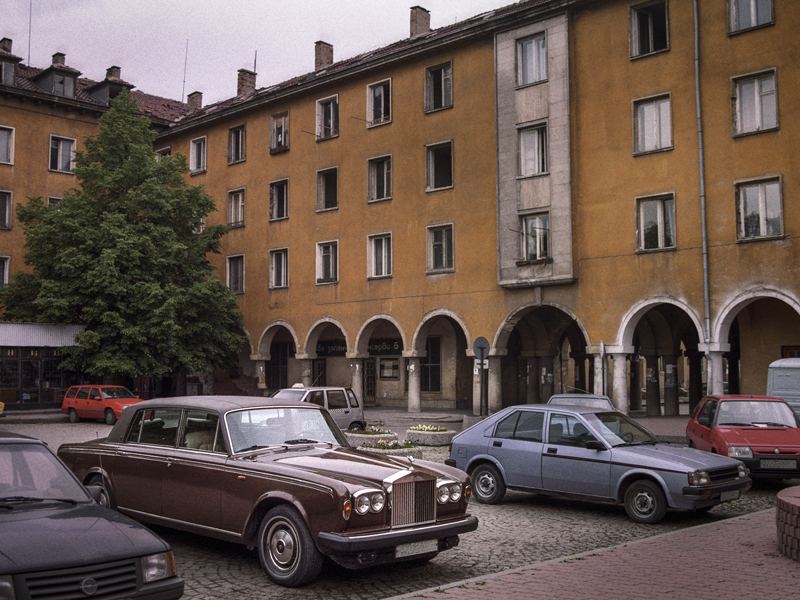 The 1990s were the time where people started making money in Bulgaria's inchoate free market. Some made a little money and bought second- and third-hand Fords and Opels to replace their Ladas and Moskviches. But some made a lot - and got fabulously rich. So they could afford Rollses of the sort you see here parked, rather incongruously, in front of the Tax Office in one of Sofia's poorer neighbourhoods 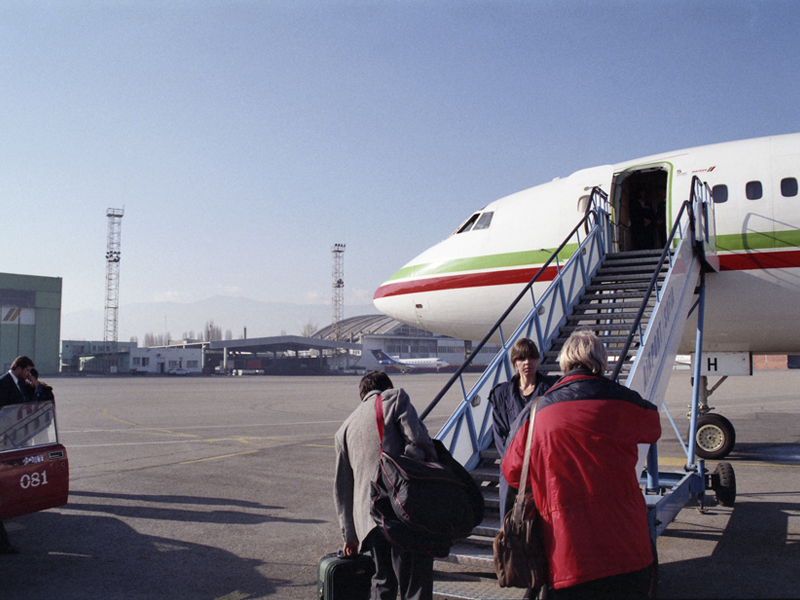 Sofia Airport had just one terminal, now still existent but serving only low-cost companies. Balkan Airlines, the Bulgarian national carrier, continued to function until it was sold off to a private company and went bust shortly thereafter

The Central Food Halls, between Sofia's mosque and the Central Synagogue, is now a thriving shopping centre, but through the 1990s it lay in ruins. In the early 2000s an Israeli company bought it and turned it into what it is today