Best of Stalinist monumental art © Anthony Georgieff
Monuments to the Red Army still dot Bulgaria – and many still venerate them
If you thought that the most impressive monuments of the Communist regime were the nondescript suburbs of prefabricated blocks of flats – Lyulin, Mladost and Druzhba being just three of numerous examples in Sofia, you have a point – their message about uniformity, limitations and bad taste is very much evident today. But besides the drab present, when the "foundations of the bright future" were being laid, Communist propaganda also relied extensively on the "glorious past." It idolised its heroes: the Red Army, which helped establish the regime, and the Second World War partizani, the pro-Soviet guerillas who would become this country's establishment during the following 45 years. The totalitarian state poured its veneration for them in megalomaniacal structures made of tons of iron and concrete. Today, with a few exceptions, they still stand where they were – in the central streets and squares of cities and villages.

Bulgaria is probably the only country in Eastern Europe where the Red Army is still regarded as a liberator rather than oppressor, and any questioning of that would swiftly be politicised in terms of "national interests." 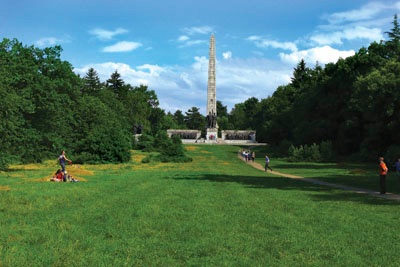 The historical truth is that on 5 September 1944 Soviet troops invaded Bulgaria, a German ally, even though the country was not a part of a war theatre. Four days later, a Socialist revolution was declared in Sofia. It paved the way for the Stalinisation of Bulgaria, complete with state terror, labour camps, collectivisation, and 45 years of hardline Communism.

Over the next decades, the Communists would acknowledge the decisive help of the Red Army, without which they would not have gained or held on to power, by erecting monuments. The fact that not a single Soviet soldier had died in action in Bulgaria did not matter.

There are no exact figures but, together with the memorials to the Russian soldiers who took part in the 19th Century Russo- Turkish War, the monuments add up to about 400. Those to the Red Army are scattered throughout the country. When they depict a single soldier, they are commonly nicknamed Alyosha. The figure of the triumphant Soviet warrior dominates the central squares of Burgas, Ruse, Sliven and Stara Zagora. The only "Alyosha" you can no longer see is the one in Pleven: he was removed from the city centre in 1991 during the rule of the Union of Democratic Forces, or SDS, cut into pieces and melted down.

Vandalism or political attitudes? Some of the heroic statues of the Red Army Monument in Sofia have been disfigured by either scrap metal thieves or by local youth drinking beer in the surrounding park

The most impressive monument to the Red Army is the one in Sofia – a typical example of "classic" Stalinist style. The initial idea was to build a memorial to the victims of the Second World War on the site. But on the eve of the 10th anniversary of the Socialist Revolution in Bulgaria, Valko Chervenkov, head of state and the Communist Party and eminent supporter of Stalin, decided to do something a bit more grandiose. On 9 September 1954 the park between Eagles' Bridge and Sofia University saw the inauguration of a memorial complex to the victorious Red Army. This monument with its unambiguous symbolism took up 2,000 sq m, or 21,500 sq ft, of the park. The 37 m, or 122 ft, high composition embodies the Communist idea of freedom: a triumphant Soviet soldier raising his submachine gun, a peasant woman with a child and a worker. The bronze bas-reliefs under the central figures depict the "Great October Socialist Revolution," the "Great Patriotic War" and the subsequent "backup" of the Soviet Army: a bomb thrower, a machine gunner and a female member of the Komsomol. As there were no battles in Bulgarian territory, the 10 stone blocks with bronze wreaths were supposed to symbolise the 10 strikes made by the Soviet Army on Berlin. 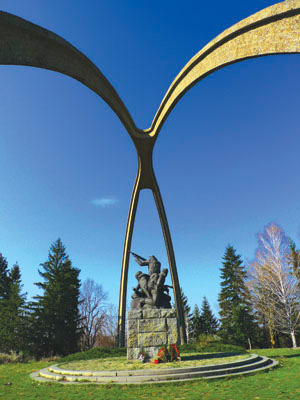 A monument to the fight between partizans and the police near the village of Balvan, Veliko Tarnovo. In 2007 either an anti-Communist or a scrap metal thief cut off one of the partizan's submachine guns a few days ahead of planned 9 September celebrations

In 1993, Sofia's municipal council, which was dominated at the time by the anti-Communist SDS, decided to remove this monument which it said glorified an occupying army. Russia's embassy in Sofia and some circles in the Kremlin voiced sharp protests, and the plan was halted by order of the foreign minister. The brass inscription reading "To the Soviet Army liberator from the grateful Bulgarian people," which was stolen for scrap metal in the 1990s, was restored in 2001.

The second attempt to remove the memorial took place five years ago, the result of a petition. It demanded the removal of a monument to "an army that had occupied Bulgaria" and which was "a provocation to the thousands of graves of the victims of a regime established by the bayonets of this army." The campaign was ignored or mocked by the media and Bozhidar Dimitrov, at the time director of the National Museum of History and a member of the ruling Bulgarian Socialist Party, or BSP, and now a minister in Boyko Borisov's government. He called the organisers "politically marginal" and "stinking remnants of fascists."

During his visit to Moscow in May 2005, Prime Minister Sergey Stanishev assured Vladimir Putin that Bulgaria respected its Soviet monuments. Some time earlier, Estonia had dared to move the statue of a Soviet soldier to a military cemetery, provoking a strong verbal backlash in Moscow.

The only recent threat came from excavation work during the construction of the new underground station. 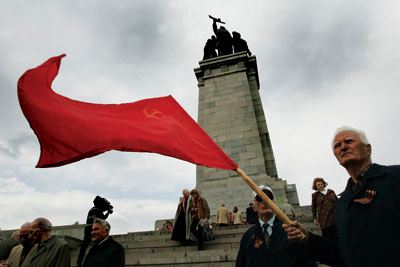 On 9 May (Victory Day in Soviet parlance; now Day of Europe) as well as other Communist great dates such as 9 September and 7 November the Red Army Monument attracts nostalgic Socialists

The monument has two faces. The first is covered in graffiti. In front of it teenagers drink beer or work on their skate boarding skills. The other, "official" face appears on 9 September, 9 May and 7 November, when mostly pensioners lay flowers and wreaths on the carefully scrubbed monument.

On these dates, former Communists and current Socialists also take flowers to Bratskata mogila, or the Fraternal Hill, in the Borisov Garden . It is another place for veneration dating from the totalitarian era. At the base of the 41 m, or 135 ft, tall obelisk rising from the highest point in the park lie the bones of those who died in the resistance movement of 1941-1944. A rock garden was destroyed to make room for the structure. and the park, which had been created by King Boris III, would be called "Freedom Park" because of the monument. The memorial has been in poor condition for years: on 9 September 2009 BSP leader Sergey Stanishev and company, who traditionally mark the anniversary of the Socialist Revolution there, were welcomed by swastikas and anti-Communist slogans.

The Fraternal Hill in Sofia is not the only monument of this name. Similar memorials to members of the war-time Marxist resistance exist in the centres of nearly all large Bulgarian towns and a number of villages. Until 1989, the Communist state expressed its regard for these so-called "active fighters against fascism" in concrete terms as well, by giving them and their families good jobs, generous pensions, educational advantages, flats, free medicines and other privileges.

One of the most notable sculptures dedicated to the partisans is the monument in the village of Balvan, near Veliko Tarnovo. The figures of the guerrilla fighters, also known as shumkari because they usually operated out of forests, stand on a concrete platform atop a hill at the end of the village. They appeared there in March 1964 to mark the 20th anniversary of the Battle of Balvan between the Gabrovo-Sevlievo guerrilla band and the tsarist police, which resulted in the death of 11 partisans. The monument is the meeting place for the Socialists in the region, especially ahead of elections.

Twenty years after the fall of the regime, the memory of the victims of the Communist dictatorship – about 30,000 people killed without proper trials – is honoured only with modest plaques in Sofia, Varna, Lovech and Sliven. The tragic figure of the assassinated dissident writer Georgi Markov has no monument.

The memorials to the Red Army and the partisans continue to be an object of veneration for the BSP. You can be pretty certain where Stanishev and Parvanov will be laying flowers next time they remember one of the Red Army's heroic feats.