NDK: GETTING CLOSER TO THE MASSES

© Anthony Georgieff
Over 30 years, the National Palace of Culture has changed from being the official apotheosis of Communism to a venue for meetings, party congresses, concerts and a shopping centre

In Sofia, there is only one place where you can see all the layers of modern-day Bulgarian society in just a couple of hours: the National Palace of Culture, or NDK. You don't even have to go into the massive building bedecked with billboards and notices. It is enough to hang around in the square in front.

The area around the National Palace of Culture, better known as Endekato, is where teenagers go to flirt, skateboard or drink beer. Elderly Sofianites relax in makeshift cafés. Mothers stroll with their children, keeping an eye out for rats or tramps in the green areas. Buskers hone their talents alongside the sellers of corn on the cob, candyfloss and ice cream. In the evening, the square swarms with people heading for the huge Hall 1 for a concert, maybe featuring Nigel Kennedy or, more often, a chalga star. In November and March, they are joined by cinema enthusiasts, attracted by the best films of the Cinemania and Sofia Film Fest festivals, shown on the large screen in Hall 1. You might bump into the exhibition stands of trade fairs such as Stroiko and Made in Bulgaria. Outside Endekato, you can also see Sofia's wealthier residents heading for the posh restaurant on the top floor of the building and folk from the provinces enjoying their first trip to the capital city. You might even run into a well-known politician. All post-election press conferences always take place in NDK and most large political parties hold their congresses in, naturally, Hall 1. 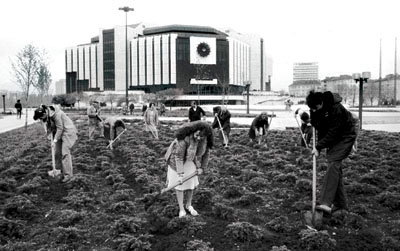 NDK encapsulates the whole of Bulgaria in one small area, but this is the only "small" thing about it. The building, which was completed in only four years, was – and still is – propaganda on a grand scale.

The often quoted fact that steel in the NDK outweighs the Eiffel Tower is beside the point.

On 27 December 1977, the Council of Ministers in Communist Bulgaria held an important meeting before the New Year holiday. Minister of Culture Lyudmila Zhivkova put forward the idea of building a National Congress and Concert Hall in Sofia that would befit the flourishing Socialist society.

The proposal met with agreement. If everything went well, the building would be ready in time for the grandiose celebrations of the 1,300th anniversary of Bulgaria as a state, in 1981 (Zhivkova was behind this scheme too). On the other, the minister of culture was Todor Zhivkov's daughter, after all. 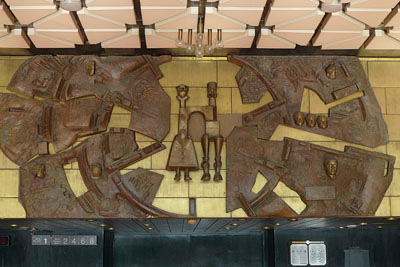 Bas reliefs, mosaics and murals done by the top artists of the time bedeck the NDK halls and were supposed to praise the Socialist reality of Bulgaria

The construction began in the spring of 1978, although the designs of architect Aleksandar Barov were neither completely ready nor approved. Work started at an udarnik, or accelerated, pace, accompanied by various pronouncements from the propaganda machine. The newspapers published photos of happy builders giving cheerful interviews. "Blocks of flats and plants are built every day, but a People's Palace of Culture is built only once. A unique centre, which will be of use for all people – this is where my pride comes from," said Ivan Mihov, a member of the National Komsomol Conference team of workers, to the Pogled weekly in August 1980.

None of the enthusiastic admirers suspected that the construction of the "unique complex" was inspired by one of the great symbols of "capitalism": the Twin Towers of the World Trade Center in New York. In the 1970s and the early 1980s, a Bulgarian engineer, Dimitar Agura, was involved with the construction of the World Trade Centre. His brother, architect Atanas Agura, designed the square around NDK. He visited New York twice – the second time with architect Aleksandar Barov. 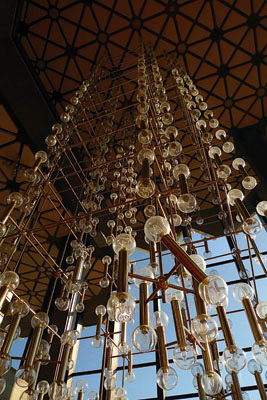 You will tell them by the lamps: the NDK interior is dominated by a series of lamp in a very characteristic 1980s style

In any event, the final result was spectacular. NDK stands 51 m high and occupies an area of 18,300 sq m. The total floor area of 123,000 sq m was like a cross between a maze and a cave, filled with treasures of "mature Socialism." Every detail in the building screamed "Communist luxury" – from the moquette carpeting and the heavy glass chandelier to the sumptuous propaganda murals, mosaics and compositions created by the top artists of the time. The square was equally fantastic. Carefully arranged gardens filled with plants imported from the GDR and Czechoslovakia and fountains adorn its marble-covered terraces (apparently, it did not occur to anybody they would become very slippery in winter).

The most fantastic, shocking and even scandalous thing, however, was the monument at one end of the square. Valentine Starchev's gigantic metal and concrete sculpture entitled 1,300 Years of Bulgaria started falling apart soon after it was officially unveiled. Sofianites were equally quick in thinking up irreverent names for it. The only printable one is probably "The Fallen Messerschmitt."

In the first years of its existence, NDK was mainly the stage for the lack-lustre plenums of the Bulgarian Communist Party, or BKP, and the more animated sessions of the Banner for Peace International Children's Assembly. Another of Lyudmila Zhivkova's creations, the assembly took place four times between 1979 and 1989. 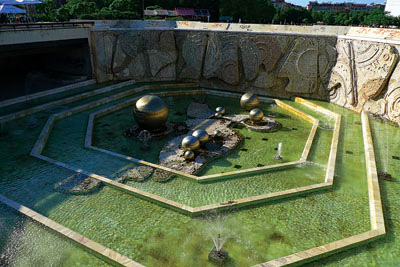 Even while the construction was going on, Sofianites did not exhibit very warm feelings towards NDK. But the building has managed to serve its purpose. No one now could imagine Sofia without this mammoth in the city centre.

NDK occupies the site where the barracks of the First and Sixth Sofia Regiments, the garrison bakery and the Perlovets Freight Station stood until the mid-1970s. They were mostly in ruins – a legacy of the Allied bombing of Sofia at the end of 1943 and the beginning of 1944. There also was the memorial to the soldiers from these regiments who had died for Bulgaria in the wars until 1918. The monument contained three plaques. One of them was destroyed during the air raids but the other two were still there. These memorial plaques were removed, together with the remains of the buildings. They have never been returned to their original site, despite the official promises. Today, the only thing that reminds of them are several black-and-white photographs from the first half of the 20th Century and the sporadic attempts of civil associations to make Sofia's Chief Architect Petar Dikov reinstate the memorial.

Instead, in 2001, a memorial stele was erected in front of the main entrance to mark the 20th anniversary of NDK. The inscription on it expresses gratitude to all those who took part in the construction of the complex. 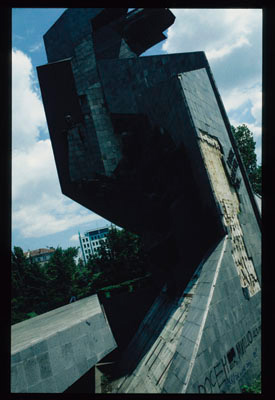 Ironically, the 1300 Years of Bulgaria monument started falling apart a few weeks after its official inauguration in 1981

However, the Endekato of 2001 had little in common with that of 1981. The name has been changed from People's to National. One of its main functions is as a conference venue. Actually, the first large event of this kind was in 1985, when UNESCO held its sessions there for over a month. It was only after 1989, however, that this country saw such events as the speech of Pope John Paul II during his visit in 2002 and the meeting of NATO foreign ministers in 2006. In 2005, NDK won the Apex Award for the World's Best Congress Centre of the International Association of Congress Centres, or AIPC.

For ordinary Bulgarians, NDK is a place to go to have fun: they go there to see a film or a concert, buy a thing or two at the trade fairs or a piece of cheap pizza from the cafeterias or go skating in winter. So it was little surprise that they chose the snow-covered underpasses in front of NDK as an arena for an improvised snowball fight in the first hours of 1 January 2000. They had gone to the first open-air celebration of New Year's Eve in this country, fired with enthusiasm. Zhan Videnov's catastrophic Socialist government had been toppled from power in 1997 and Bulgaria's future seemed brighter.

Ten years later, the 1,300 Years of Bulgaria monument was fenced off for fear falling debris from it might be a public danger and now is going under reconstruction. The NDK building itself has not had any major improvements since it was built.