WHO WAS GEO MILEV?

Poet who lost an eye in the Great War, changed Bulgarian literature - and was assassinated for his beliefs

For most foreigners, their only contact with Bulgaria's poets are the monuments of the 19th-century revolutionary Hristo Botev that have been erected all over the country, and Sofia's most beloved sculpture, the Slaveykovs, father and son, in the eponymous square.

Bulgarian poetry was scarcely ever richer, more ambitious and ready to experiment than in the first half of the 20th century. In this hectic period, traditionalists clashed with modernists and influences from the West combined with poetical ideas inspired by folklore. Themes ranged from national liberation to the futile excesses of war (the Balkan Wars as well as the Great War) to existential musings on the human condition. There were feuds, there was drama, there was conflict. There was also tragedy. Some of the most prominent poets of the day died violently. Gentle symbolist Dimcho Debelyanov was killed in the Great War. Hothead Peyo Yavorov survived being part of a revolutionary band, but committed suicide after a disastrous marriage. Communist Nikola Vaptsarov was executed for his clandestine activities. Add to this melancholic Hristo Smirnenski who died of consumption, and Pencho Slaveykov who did not live long enough to see his Nobel Prize for literature, and you end up with a group of poets whose personal stories are as fascinating as their verses. The only honoured member of this Bulgarian elite to die of old age in his own bed was Ivan Vazov.

In this extensive group, one figure stands tall: Geo Milev (1895-1925). In his short and stress-filled life he revolutionised Bulgarian poetry and introduced Europe's finest modern poets and thinkers to the local audience, before losing his life in tragic circumstances. Although he was left-leaning and under Communism was celebrated as such, his prominence survived the fall of the regime in 1989. Geo Milev is still read, and his name is found on streets, schools, and a neighbourhood in Sofia.

Geo Milev was born Georgi Kasabov in Radnevo, a town in Bulgaria's southeast. His father was a teacher and a journalist, and after he moved the family to bigger Stara Zagora, he opened a small printing house and a bookstore. The family business had an obvious effect on young Geo Milev. At the age of 12, he wrote his first verses, developed his talent for drawing and translated fiction from Russian.

Young rebel. While still a child, Geo Milev draw this cartoon of the then Bulgarian prince, Ferdinand, on the family wardrobe's door. Now exhibited in his museum in Stara Zagora

After a year in the Romance Philology Department of Sofia University, in 1912, Geo Milev went to Leipzig, where he became immersed in contemporary German literature. When the Great War broke out, in 1914, he went to London. His short stay there, apparently, looked suspicious to the German authorities, who arrested him upon his return to Germany and accused him of being a British spy. The charges were dropped due to lack of evidence. In 1915, Milev returned to Bulgaria which by that time had already joined the conflict.

Milev was busy during the following year. He took care of the family business after his father was called up in the army. He became close to the young symbolist poets in Bulgaria and he translated and published Mallarmé, Verlaine, and Nietzsche. He organised a drama troupe in Stara Zagora, where the theatre now bears his name.

In 1916, Geo Milev too was called up and was sent to the Salonika Front as an intelligence officer. On 29 April 1917, during a British bombardment, he was severely wounded in the head.

Unlike Debelyanov, Geo Milev survived. As with so many participants in the carnage we now call the First World War, the trauma he sustained defined the rest of his short life.

The poet lost his right eye and suffered excruciating pain. In one of his best known poems, "My head..." Milev compares himself to a bloodied lantern with broken windows lost in wind, rain and fog. 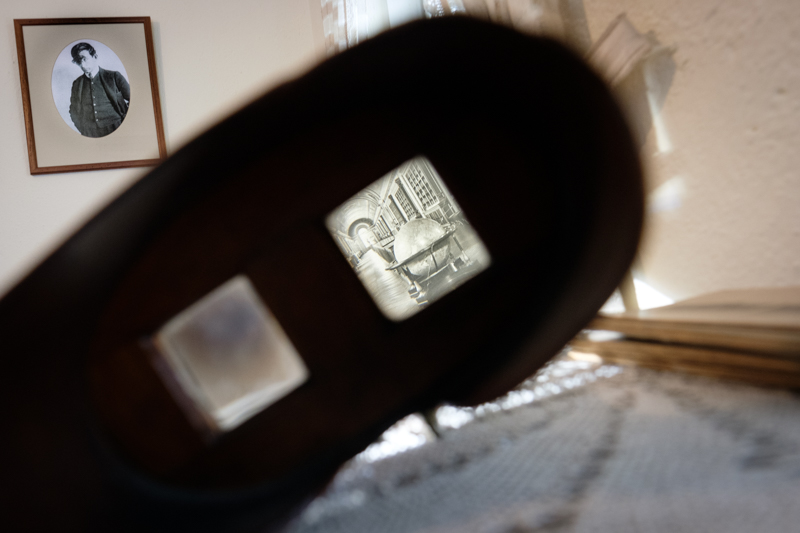 The museum of Geo Milev in Stara Zagora has an extensive collection of his personal items and literary, journalistic and art work. Most of these were donated by the poet's family

When the war ended, Milev spent several months in Berlin, in and out of restorative surgery, and fell head over heels for the buzzing post-war culture of Germany. Borne from the tragedy of loss and the inhumanity of a pointless and bloody war, a new artistic movement was emerging: expressionism. Geo Milev adopted it, refining his style under its influence.

Geo Milev returned to Bulgaria in 1919. In Sofia, he founded a magazine, Vezni, or Scales, where he published symbolist and expressionist Bulgarian poets and translations of Nietzsche, Schopenhauer, Edgar Allan Poe, and Oscar Wilde. Vezni was not to last. It closed in 1922, but soon afterwards Milev started a new project, the literary magazine Plamak, or Flame.

Meanwhile, Bulgaria was in the midst of a national catastrophe. A defeated nation in the Great War, it had lost some of its population and territory. The economy struggled and there were hundreds of thousands of destitute refugees. The government of the populist Agrarian Party put considerable effort into reconstruction, but its methods were often brutal, dictatorial, and anti-intellectual. Nationalism was riding high, and so were Communism and mysticism. 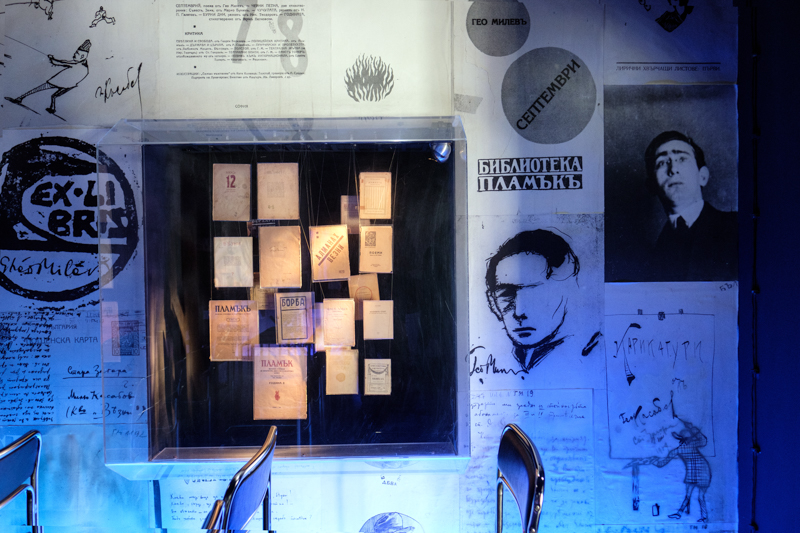 Installation of Geo Milev's artwork in his museum in Stara Zagora

In June 1923, a bloody military coup overthrew the Agrarian Party. In September of the same year, Agrarians and Communists staged a mutiny, which was later called the September 1923 Uprising and was instigated by the USSR, its first attempt to export revolution to Europe. The Bulgarian government repressed the mutiny with a brutality that spawned a clandestine and violent Communist opposition. In the years that followed, Bulgaria was on the verge of a civil war. Political assassinations followed one after another, inciting bloody repercussions from the government. Tensions peaked in 1925. On 16 April, Communist terrorists blew up the St Nedelya Church in Sofia while it was packed with people. 134 people lost their lives in the blast, and hundreds were wounded. The police reciprocated with mass arrests of leftists.

Geo Milev was one of those.

A year previously, he had published his best known poem, Septemvri, or September. Inspired by the revolt of 1923, it masterfully uses rhythm and expressive imagery to recreate the hopes of the rebels and the tragedy of their failure.

The government was not sympathetic. After the poem was published in Plamak, the whole print run of the magazine was confiscated. In early 1925, Geo Milev was charged with violating the Law for the Defence of the State. He was arrested, but then released on bail.

In the wake of the St Nedelya terror attack things deteriorated. On 14 May, Geo Milev appeared in court and defended himself on the basis of freedom of artistic expression. He was found guilty and sentenced to a year in prison and a heavy fine. He appealed.

In the early morning of the following day, 15 May, a police agent appeared at Milev's home. The poet was needed in the police station for a "talk," he said. Geo Milev complied. He was never seen again.

On 24 January 1954, a mass grave was discovered on the outskirts of Sofia. One of the skulls still had a glass eye in its right socket. Apparently, these were the remains of Geo Milev. An examination of the bones showed that the poet was strangled, probably with a wire.

By that time, Geo Milev was already one of Communism's stars. The regime might not have been much into avantgarde poetry but Milev's leftwing ideas and the manner of his death clearly made him fit for the position of a martyr in the Communist pantheon.

In 1953, Milev's home in Stara Zagora became a museum. September was translated into foreign languages with state sponsorship. The glass eye that he had been wearing when he was killed became an exhibit in the Museum of the Revolutionary Movement in Sofia.

Unlike many darlings of Communist art, Milev survived the collapse of the regime: his poetry is too good and sincere to be swept under the carpet of ideology and political activism. When the Museum of Revolutionary Movement was shut down for good, in the early 1990s, his eye became part of the collection of the National History Museum. Radnevo, the poet's birthplace, opened a small exhibition in his former home. The museum in Stara Zagora continues its work and has digitalised his writings: poems, articles, literary analysis, translations. Translations of September into several languages, including Chinese, Japanese and Esperanto, are also available online. The English version, published in 1961, is on www.geomilev.com/pdf/September_by_Geo_Milev.pdf. Besides Geo Milev's works, his museum in Stara Zagora preserves a moving personal item: the poet's spare glass eye. 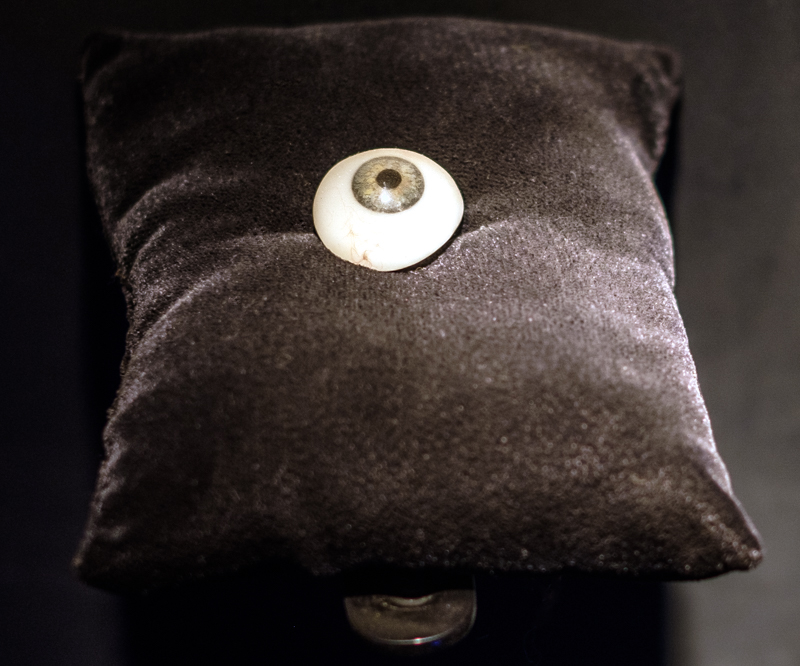