Recently, Bulgaria has become a staple in the Internet lists compiling the oddest abandoned places in the world with a building whose creators hardly imagined, not even in their darkest nightmares, the way it stands now: the Memorial House of the Bulgarian Communist Party at Buzludzha.

The complex of an assembly hall and an huge tower of exposed concrete was built on Stara Planina's Mount Buzludzha in 1981. It was meant to be a celebration of the 90th anniversary of the foundation of the predecessor of the BKP, which had been founded at that mount.

On 2 September 1891, a group of Socialists, led by Dimitar Blagoev, used as a cover the mass gathering commemorating the revolutionary band led by Hadzhi Dimitar, who had been defeated at Buzludzha by the Ottomans in 1868. They needed the precautionary measure as the then government was at least unsympathetic to the young Bulgarian Socialist movement. This was how the Bulgarian Socialist Democratic Party, or BSDP, came into being.

The Bulgarian Communist Party claimed to be the direct heir of the BSDP. Its top brass were aware that 1981 was the best year to celebrate the continuity.  At the time, Bulgaria was in the midst of the celebrations of the 1,300th anniversary of its foundation. With the monument on Buzludzha, the BKP wanted to publicly declare its place in the age-long history of the nation and in its future.

The decision for the building of a congress centre for the BKP elite on Buzludzha was taken in 1971. Construction work began in 1974.  A significant investment of 14 million leva was needed, but a solution for it was found quickly: the project was to be financed by "voluntary" contributions of 0.5 leva deducted from the salaries of all working Bulgarians. The construction itself was given to the Construction Corps joined by volunteers. 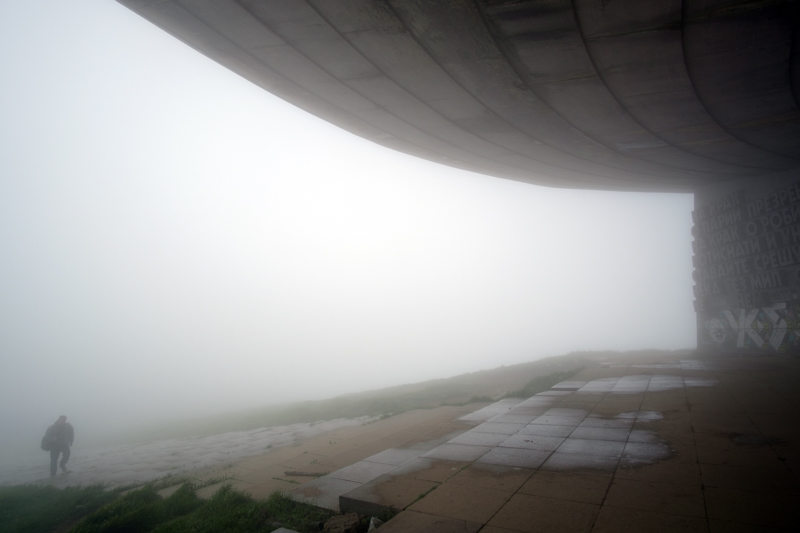 The weather on Mount Buzludzha is notoriously harsh and unstable, making construction of the monument a hard task. According to some accounts, several construction workers died during the building process. The Communist authorities never acknowledged the deaths

The architect, Georgi Stoilov, created a building that was simultaneously futuristic and brutalist. It dominated the environment, could be seen from miles away and easily conveyed the project's message: the BKP's roots are deep, the party is here to stay.

The dimensions were overwhelming. The round conference hall, which gained the monument the monicker Flying Saucer, had a diameter of 42 metres and was 14.5 metres high.  A 70 - metre-tall tower rose next to it. It was decorated with 12 - metre-tall red stars, rumoured to be made of rubies.

The interior decoration was entrusted to established artists and sculptors including Velichko Minekov, Valentin Starchev and Yoan Leviev. The mosaics in the assembly hall included portraits of Marx, Lenin and Todor Zhivkov while the murals in the corridors extoll "peaceful labour." The titles of the various artworks are self-explanatory: A Figure of Those Who Burn in Struggle Eternally; Workers of the World, Unite!; Fifth Congress of the BKP; Bulgarian-Soviet Friendship, and so on.

The builders of Buzludzha faced a variety of challenges. The mountain top had to be artificially flattened, the weather was sometimes extreme, roads leading up to the complex had to be built. There were labour accidents, some of them resulting in fatalities.

The Memorial House was inaugurated personally by Todor Zhivkov on 23 August 1981. In the following years the building came to symbolise the victorious Communist party. However, few at the time knew that owing to poor workmanship the building had serious technical deficiencies even on the day it was inaugurated. Shortly thereafter some of its installations had to undergo a major overhaul.

The collapse of the regime in 1989 turned Buzludzha into an anachronism. It became the target for anyone who wanted to express their negative sentiments for Communism or, pressed by the economic crisis and destitution, was in search for any scrap material. As Todor Zhivkov was pulled down from his position as the supreme party and state leader, the party leadership decided to scrape his face off the mosaics. In 1992 the building was nationalised along all other BKP property, and consequently started to fall apart.

The aluminium window frames were lifted for scrap metal, the window panes were broken, the furniture got carried away. Some used shotguns to shatter the red stars in the hope some rubies would fall down. However, it emerged that the stars had actually been made of red glass.
In the course of just a few years the building, which has been supposed to epitomise the triumph of Communism in Bulgaria, turned into a ghostly ruin. 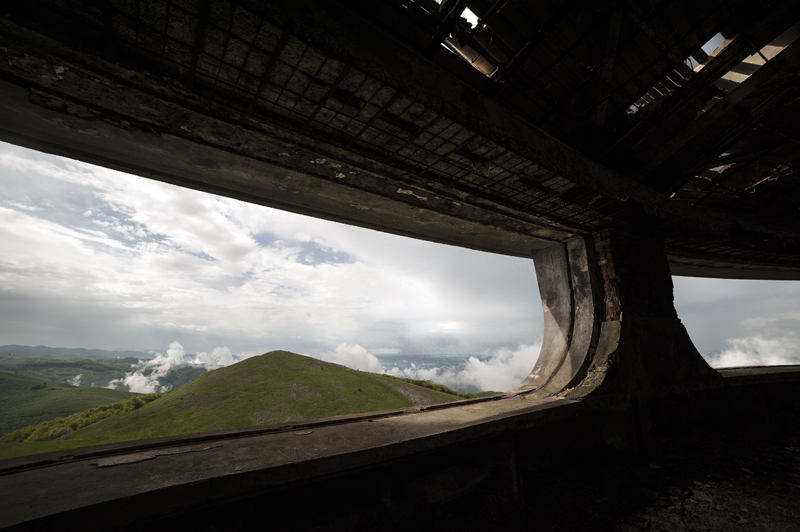 The Stara Planina seen from the Buzludzha monument

However, the monument has not been forgotten.  At the beginning of August every year the Bulgarian Socialist Party, the heir to the BKP, organises a traditional rally near the abandoned monument. It is an event that gathers ageing public that indulges in outdated songs and fervent speeches. In the 2010s the BSP and the state began arguing on who and how to take care of the building. Meanwhile, the destruction reached a point that, due to safety concerns, the entrances to the monument were sealed.

Still, whoever wants to get into Buzludzha can always find a way, especially if they are photographers. While the devastation continues, the monument's online popularity grows. When entry into it was relatively easy, bikers got inside the assembly hall to rev up their engines. The walls are covered in graffiti of varied artistic merits. Visitors climb up the huge letters once depicting stanzas from the Communist Internationale and Song of Labour in search for better selfie opportunities. Some particularly daring newly-weds do photo shoots inside the assembly hall.

The Buzludzha monument has become a part of contemporary mass culture. The building featured in The Mechanic: Resurrection (2016) starring Jason Statham, Jessica Alba and Tommy Lee Jones. The movie was shot in Bulgaria, but for artistic purposes the Buzludzha monument was "moved" to the Black Sea.  A fictitious description of the monument is also in Elizabeth Kostova's novel, The Shadow Land (2017).

In recent years some projects emerged to reconstruct the monument through virtual reality or turn it into a history museum with a panorama lift in the tower.

Most of the time, however, Buzludzha is empty – without adventurers, nostalgic Socialists or inquisitive tourists.

Mosaic portraits of (from left) Engels, Marx and Lenin, the defining figures of world Communism 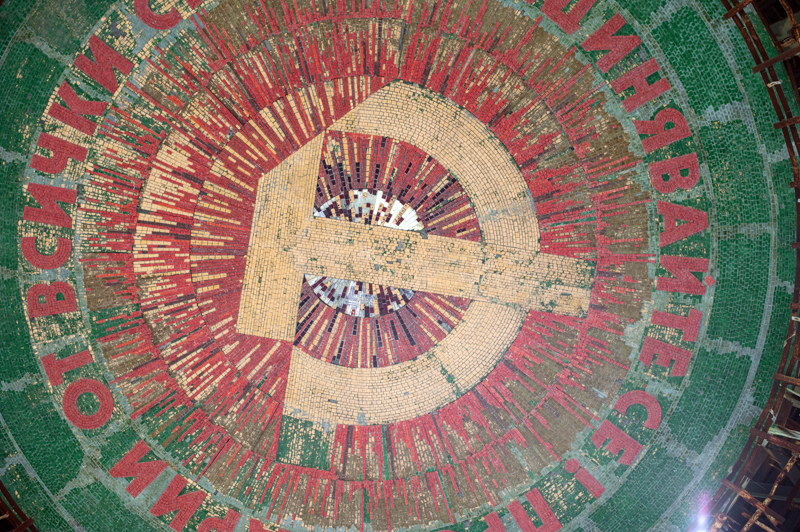 "Workers of the World, Unite!": the slogan of the Communists from Marx's Communist Manifesto, is the centrepiece of the assembly hall