Lady's fashion at the open-air market

If you have spent more than a couple of days in Bulgaria you should already be familiar with Chalga. This tacky music dominates the mass Bulgarian taste. It blares from your taxi's radio, permeates house parties and low-key restaurants, stuns popular disco clubs and resounds from the open windows of flashy cars driven by chiselled guys or silicone-enhanced fake blondes. Chalga also inevitably pops up several times while you are skipping through your local TV channels.

Chalga has its roots in Balkan folk music but propagates tunes, visions and values entirely at odds with the 19th and early-20th century tradition. It is all about fast cars, fast money and indiscriminate sex. It emerged in Bulgaria in the sunset days of Communism, spreading on pirated music cassettes of mainly Serbian pop folk music. It became an instant hit, probably because it was unabashedly sexy and vulgar, in sharp contrast to the demure folk and pop the Communist government had sponsored. When

Communism collapsed, Chalga boomed, freed from the confines of the state imposed aesthetic rules and censorship.

At this time, a Deep Purple-loving engineer had a revelation. Chalga, he realised, would only benefit if, like the underworld it sang about, it became organised. Chalga artists needed proper recording studios, promotion and intellectual property protection.

This was how Payner, a music company that would change Bulgaria's soundscape forever, was born. This happened not in some big city, but in Dimitrovgrad, a town off the road to Turkey.

Today, Dimitrovgrad and Chalga are intertwined to such an extent in the national consciousness that imagination-challenged journalists have dubbed the town the Mecca of Chalga. 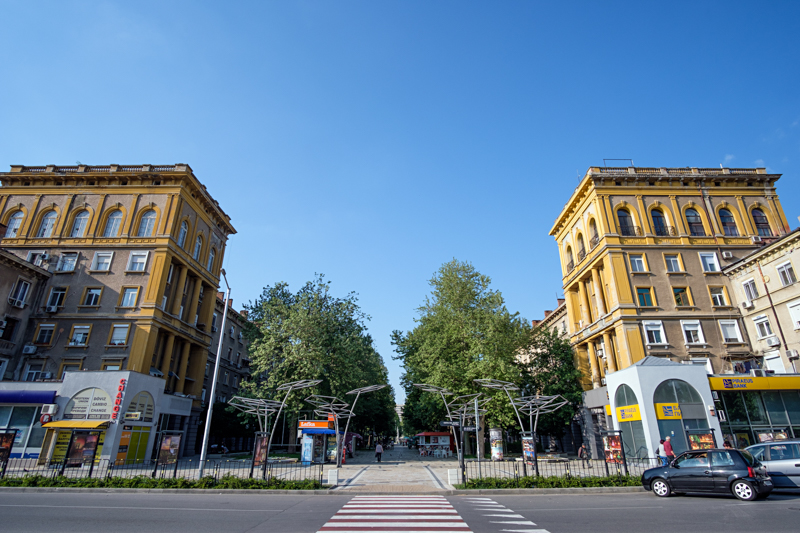 Dimitrovgrad is an example of Stalinist urbanism

When you enter Dimitrovgrad, however, you realise that the city is as removed from the Chalga lifestyle as any other place in Bulgaria. Or even more so. The are few garish men and fake blondes in the streets. Chalga is no more popular in the cafés in the town than it is in, say, nearby Haskovo.

The cityscape also has nothing to do with the over-the-top gilt and fake Rococo one associates with the Chalga lifestyle.

Dimitrovgrad looks more like a Communist utopia. Grand and solemn, its straight streets and boulevards are lined with buildings in the so-called Stalinist Baroque style: the complete opposite of Chalga aesthetics.

Dimitrovgrad was created to be the epitome of everything that Chalga is not. The town's origins promoted to young Communist Bulgaria the values of hard work, idealism, enthusiasm, strict morals and faith in a future where the workers, and not some shady figures, would prevail.

It all began in 1947, when 40 young people from newly Communist Bulgaria "spontaneously" arrived at a site by the River Maritsa. There they announced their plans to build a "city of dreams." Their initiative was entirely in the spirit of the then current propaganda that Bulgarians lived in the "historical epoch of transition between Old and New." The future was in their hands, and it required both sacrifice and labour. Soon afterwards, Prime Minister Georgi Dimitrov issued a decree, officially proclaiming the foundation of the city. As the Stalinist personality cult was in full swing, he promptly named the "city of dreams" after himself; Dimitrovgrad, the City of Dimitrov.

The City Hall was built in the modernist style typical for the 1970s. Images of young Bulgarians building Dimitrovgrad cover its walls and its surroundings

Thousands of young people from every corner of Bulgaria enthusiastically embraced the idea and flocked to this previously unknown spot. According to official data, 50,000 people participated in the construction of the city. All of them were volunteers and worked for free, or almost for free. Within a couple of years a whole city, surrounded by chemical factories, appeared. As an industrial centre, Dimitrovgrad became a hotspot for internal immigration. Young people kept arriving from all over Bulgaria. By 1956, about 34,000 people already lived in Dimitrovgrad. In 1985, the population peaked at 54,000 people. Today, between 35,000 and 40,000 people live there.

The core of Stalinist Dimitrovgrad remains intact. Its main buildings were recently renovated and the idea of declaring the town a monument of culture is popular.

Stalinist Dimitrovgrad lacks a particular sight of interest – the whole town is of interest. Several places, however, deserve special attention.

The local history museum has taken over the home of local poet Penyo Penev. Penev was one of those early arrivals who came here to built the Communist utopia. His enthusiasm, however, could not survive Communist reality. Disappointed, poor and lonely, he committed suicide in 1959. An author of honest poetry that increasingly doubted the supposed happiness of the new Communist man, he was rarely published while he was alive. In the 1960s, however, the regime turned him into a martyr and literary star, while keeping silent on the reasons for Penev's suicide. True artists are recognised only after their death: Penev remains popular today, unlike so many other poets who thrived in Communist Bulgaria, only to be forgotten soon after the regime collapsed in 1989. 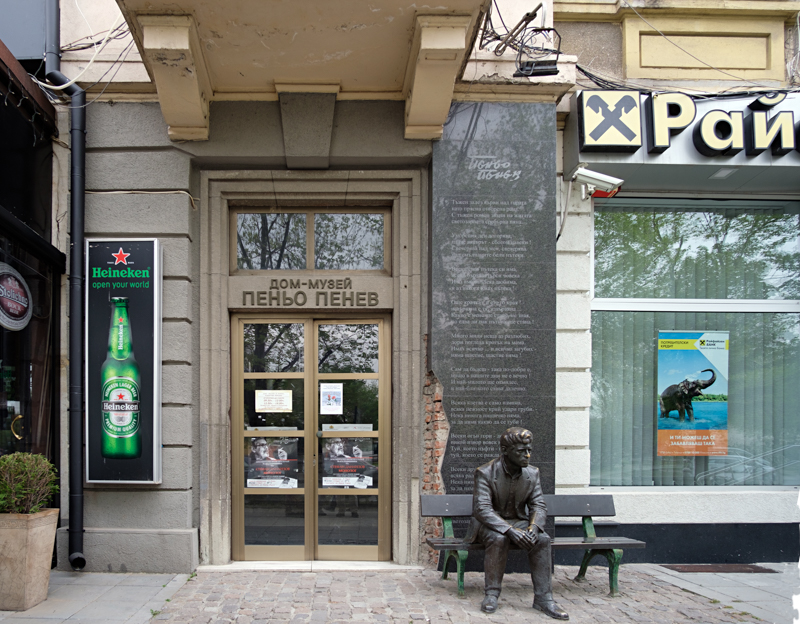 Entrance to the Penyo Penev Museum. His statue is a favourite photo opportunity for visitors

A couple of years ago, the museum purchased several rooms next to Penyo Penev's apartment, and furnished them with the humble, low-quality possessions Bulgarians of the 1950s-1980s had in their homes. Thе "Apartment of Socialist Lifestyle" exhibition inevitably makes some people nostalgic, but ultimately shows the regime's inability to provide the population with proper living conditions.

Yet, in spite of the difficulties, ambitions were high in young Dimitrovgrad. The local planetarium, named after Giordano Bruno, with its astronomical observatory is a fine example of this spirit. Built in 1962, it was the first of its kind in Bulgaria.

After the fall of Communism in 1989 and the collapse of its planned economy, Dimitrovgrad suffered the fate of most industrial centres in Bulgaria. Some of the factories closed or made workers redundant, and many people departed for good.

Dimitrovgrad is located at an international crossroads connecting Central Europe and the Bosporus, the Danube and the Aegean. At the beginning of the 1990s it started to attract small-time merchants from all over Bulgaria, the Balkans and even the former Soviet Union, who imported cheap goods from Turkey. A large open-air market appeared. There, people bought and sold everything from clothes to kitchen utensils to home appliances. The prices were low and the quality was nothing to brag about, but after the decades of Communist monotony customers were hungry for new, fashionable items.

Dimitrovgrad became a wholesale warehouse supplying goods to the whole of Bulgaria, the largest open-air market in the country. Its star began to fade at the beginning of the new century, when the standard of living improved and flashy malls, shopping centres, and cheaper Made-in-China goods took over.

The market, however, is not going anywhere. Visit it when it is open (Friday, Saturday and Sunday) and you will end up among goods and people that look barely changed from the days when Dimitrovgrad transitioned from Stalinist utopia to an emerging free market economy hotbed. You will definitely hear some Chalga as well.

Or you may not. A recent visit to Dimitrovgrad revealed that Chalga might be in decline. The local disco, boasting perhaps the most powerful equipment in Bulgaria, does not get much custom these days. A recent hard rock concert filled it with people craving for fun and entertainment, but the run-of-the-mill Chalga events do not seem to attract– at least not as much as they did when Chalga was new and fresh.

Table set for guests from the Apartment of Socialist Lifestyle

Penev's home. Enthusiasm for building the new Communist life was crushed under the brutal reality of careerism, insufficient accommodation and general hypocrisy

This huge statue of Georgi Dimitrov used to stay in the centre of town. It was dismantled in the early 1990s and tossed behind a greenhouse in one of the local parks. It is still there in spite of recent plans to make it the centrepiece of an open-air exhibition of Communist art

The heavy colonnades of the Stalinist buildings aimed to oppress. They still do 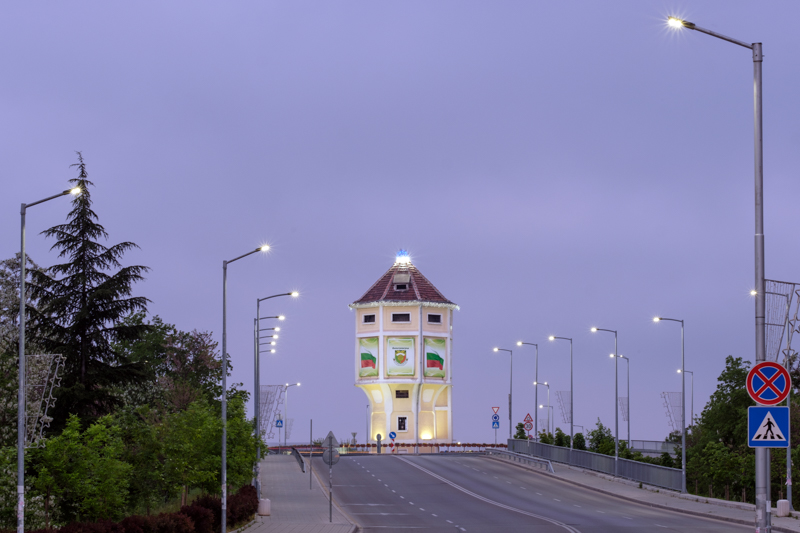 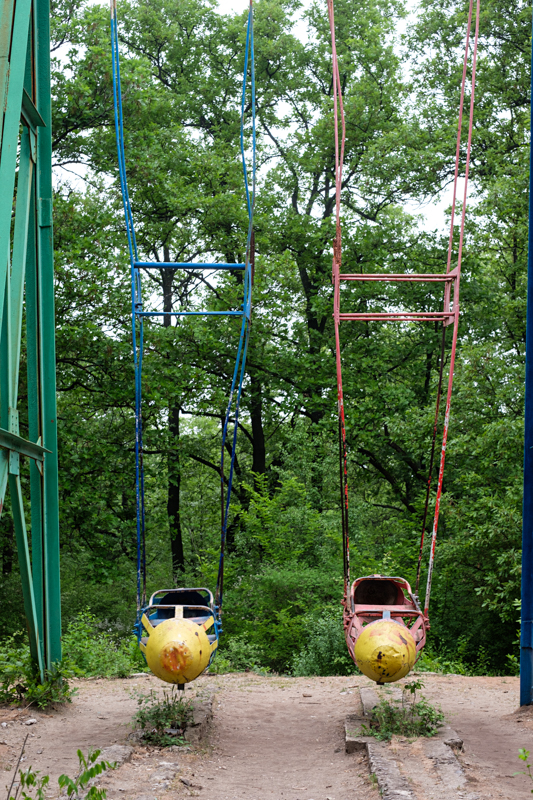 The Dimitrovgrad open-air market caters to all needs 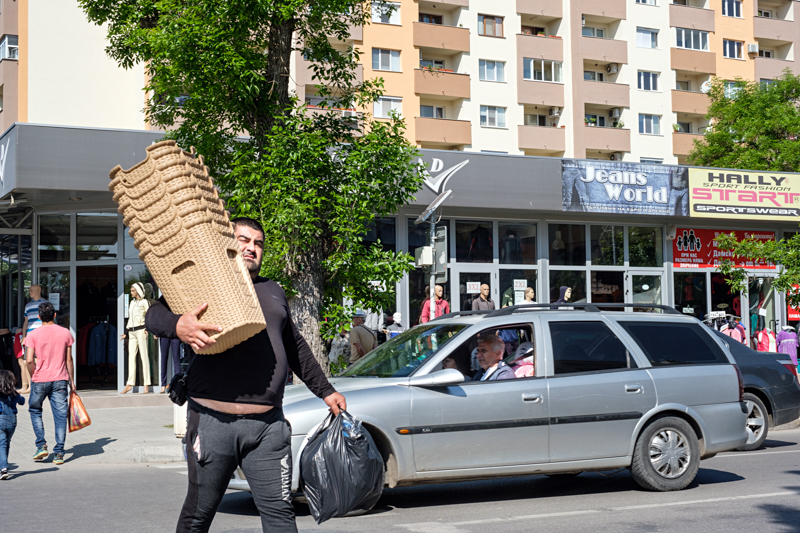 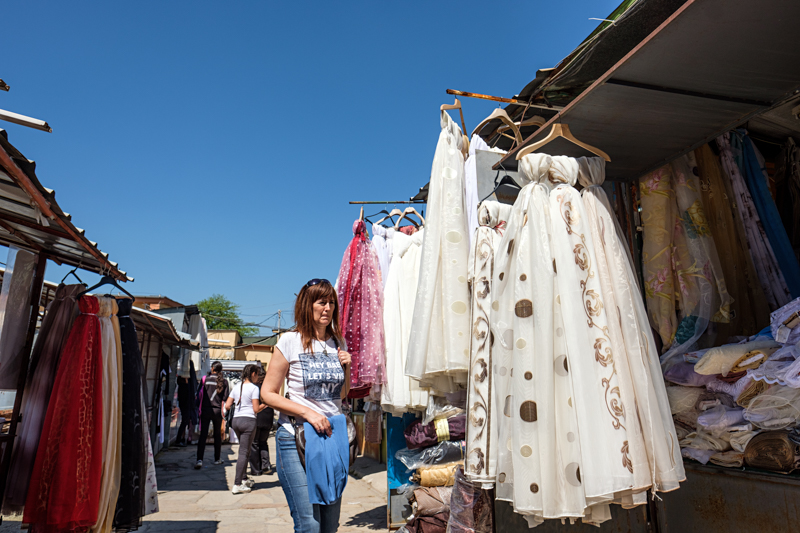 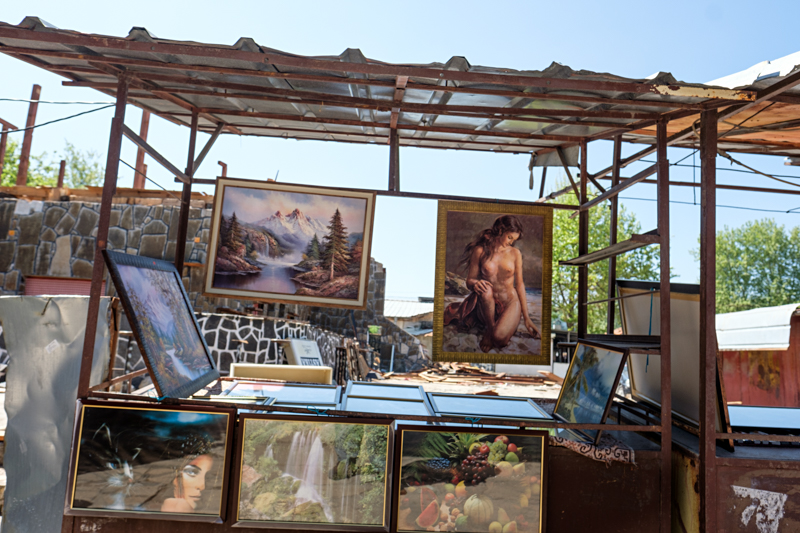