With the ubiquity of smartphones and wristwatches the question "What's the time?", coming from a stranger in the street, has become redundant. Yet, until not that long ago people relied on a single source of information for this: clocktowers.

The first of these, like the Tower of Winds in Athens, appeared as early as Antiquity and used sundials and running water to measure time. Construction of clocktowers spread in the Christian and Muslim world in the Middle Ages, boosted by the invention of the clockwork mechanism. It was, pun unintended, right on time, as the rising urban population engaged in active trade and manufacture were in dire need of something to help them organise their working activities. Soon, clocktowers spread all over Europe.

At that time, Bulgarians were under Ottoman rule. The first clocktowers appeared in their lands somewhat late, probably at the turn of the 16th-17th centuries, when a clocktower was built in Plovdiv. At the end of the 18th century and particularly in the 19th century, however, the construction of clocktowers all over Bulgaria gained momentum. Their appearance reflected the increased economic activity of Bulgarians busy in their shops and workshops in a number of industries vital to the Ottoman market. The towers, usually equipped with bells, were also used to announce major events in local life, such as a fire or an attack.

The  architecture of the clocktowers also changed. The earliest look more like fortifications, with strong stone walls and tiny window openings, and for a reason. The second half of the 18th century was a time of bandit raids, so clocktowers were used as a place of refuge by the local population. The towers from the 19th century are more elegant, reflecting the stepped-up European influence over art, architecture, lifestyle and politics in Bulgarian lands.

Construction of clocktowers in Bulgaria came to a halt after Liberation in 1878, when new European architecture became the norm. The real decline, however, came in the 1970s and the 1980s, when a number of Bulgarian towns saw their old centres – houses, streets, clocktowers and all – demolished during a mass attempt to impose Socialist urbanism on Bulgaria.

Today, about 30 old clocktowers have survived in Bulgaria, and this number includes a couple that were rebuilt from scratch. Most are in smallish cities and towns, a sad reminder of the times when they used to mark the hours for thriving communities busy in trade and manufacture.

Svishtov
You do not need to read the building inscription, saying that Svishtov's tower was built in 1763, to guess its age. Its fortress-like architecture says it all. The clockwork mechanism still works, although it is not as old as the tower. It is a 1890 replacement, made in Austria.

Tryavna's clocktower is the most recognisable one in Bulgaria, and for a reason. It is the only one that still stands in its original urban environment. Indeed, Tryavna was lucky to escape the large-scale demolition of old city centres in the 1970s and the 1980s, preserving its 19th century core almost intact. As the highest building there, the 21-metre clocktower has been the natural focus of life and a source of local pride ever since its construction in 1812. The tower's clockwork mechanism has been working since it was installed in 1815, thanks to the enthusiasm of the current keeper, a local pensioner. He is also responsible for the tower's other peculiarity: the only Foucault's Pendulum in Bulgaria is to be found there. 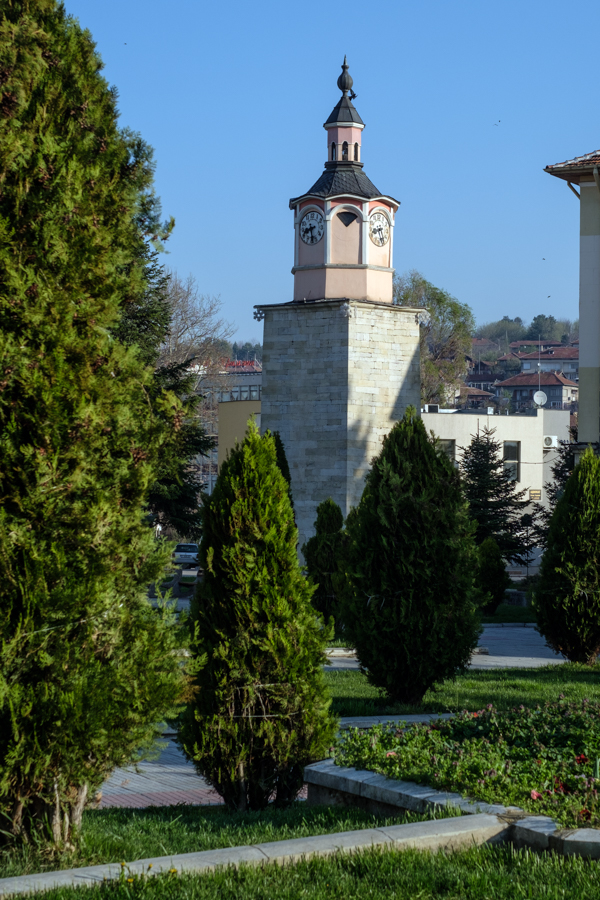 The clocktower in Byala, yet another laid-back town in northern Bulgaria, was built in 1872. Initially, it was a church belfry and received its first clockwork mechanism in 1906. It was a Made-in-Switzerland piece of machinery, donated by a former finance minister. The clock remains operational, although the tower itself has undergone some changes. In 1952, the cross that used to stand on top was replaced with a Communist five-pointed star. For some reason, in 1960 the star was replaced with an amphora-shaped figurine, which remains there to this day. 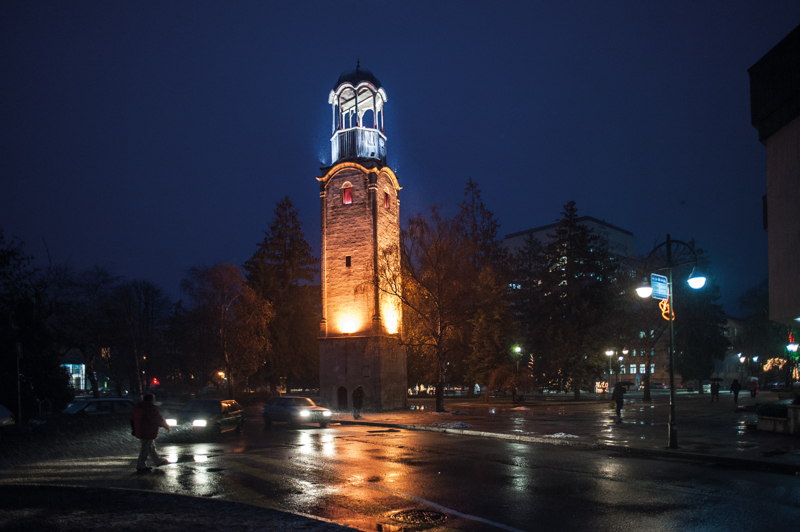 The clocktower in central Razgrad is the 1864 incarnation of an older clocktower from the 18th century. It is about 26m high, and its bell was imported from Hungary in 1731. The original clockwork mechanism is in the city's museum, after it was replaced with a new one in the 1970s. Curiously and rather unusually, Razgrad used to have a second clocktower. It, however, has not survived. 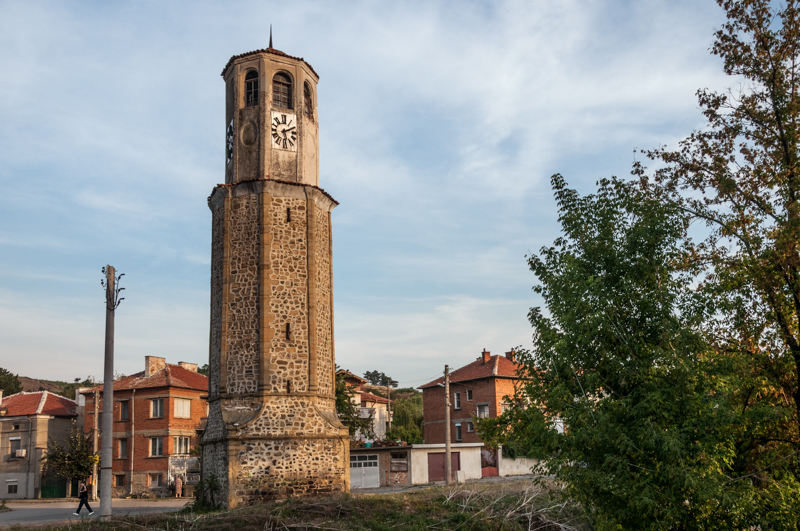 Today Karnobat's clocktower rises amid a rather uninteresting part of what in essence is not a particularly interesting town. When it was built, in the mid-19th century, the tower overlooked a busy market area. The construction was the initiative of a local Ottoman official. The tower is 23 m high; its mechanism was made by a craftsman from Gabrovo and the bell was purchased from Romania. The original mechanism was broken up and sold for scrap in the 1940s, and was replaced with a replica in 1983, made by a local artisan. 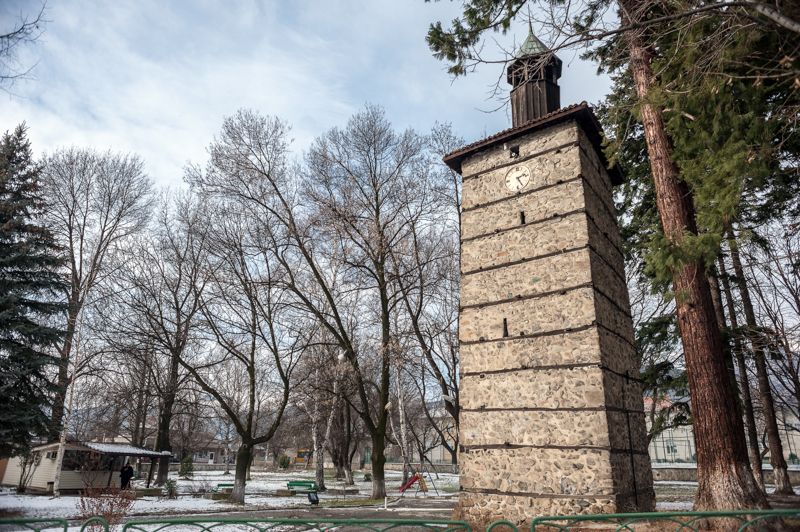 Rising to almost 18m, Zlatitsa's clocktower appeared in 1777, when the town prospered through trade and manufacture. The clock still works, although the mechanism is not the original one but a 1922 replica made by a local enthusiast, who also sponsored the restoration of the tower. 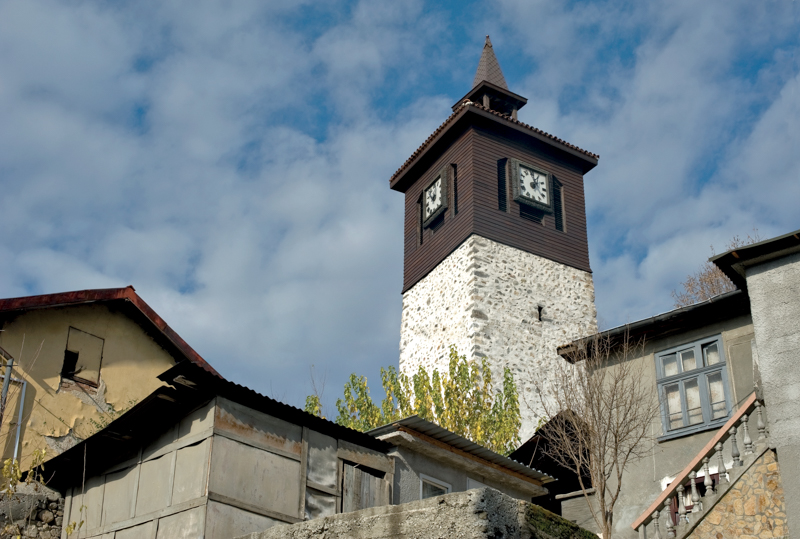 After an overeager restoration in 2009, the Blagoevgrad clocktower looks robbed of its old-time atmosphere. The drab neighbourhood where it rises, the Turskata Mahala, or Turkish Quarter, doesn't help either. However, the tower that was built in 1867 and boasted a Swiss mechanism has its own legend. An Ottoman official kidnapped a beautiful Bulgarian girl, keeping her home as a concubine. Her only relief from the sadness of an unwanted pregnancy was watching  the tower and listening to its clockwork. Then, she lost the baby. Enraged, the official shot at the tower, believing that the chimes were to blame. The traces of his shots can still be seen on the tower's walls. Or so they say. 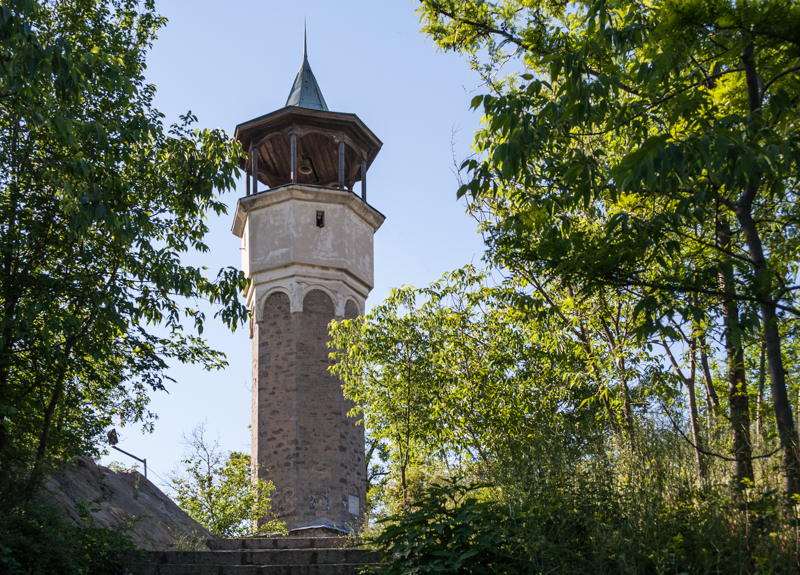 The year when the first clocktower was built in the Bulgarian lands is lost to history, but it happened some time at the second half of the 16th or the beginning of the 17th centuries in Plovdiv, a multicultural city of lively trade and manufacture. Constructed atop one of the city's hills, the clocktower was such a novelty that it stuck in the local imagination.

Even today, it remains firmly embedded in Plovdiv's topography. The hill is still called Sahat Tepe, or Clock Hill, although for some time its official name has been Danov's Hill.

The clocktower atop Clock Hill, however, is not that famed construction. The original, which was built of wood, burned to the ground in the beginning of the 19th century. In 1809, it was replaced with the current one. It is 17.5 m high and its mechanism was made in Vienna and installed in 1883. 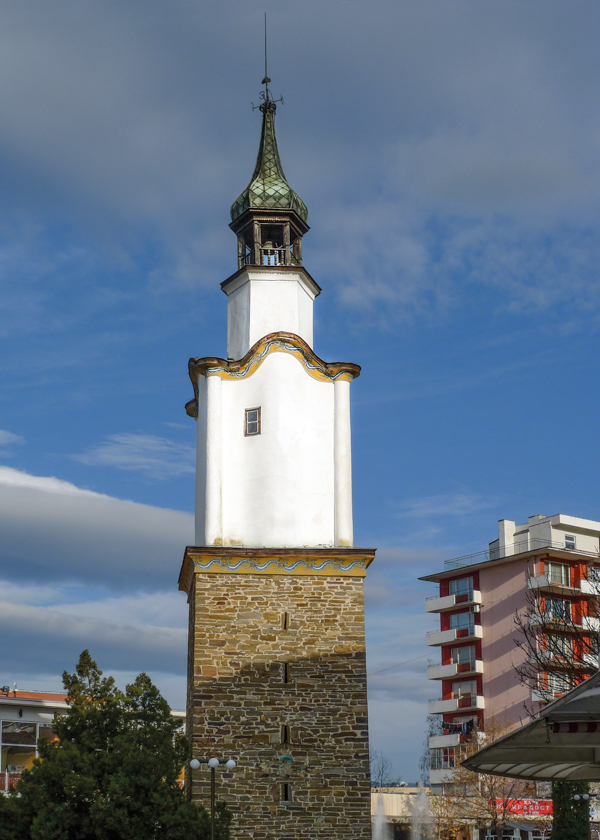 Rising to 30m, Botevgrad's clocktower is the tallest preserved in Bulgaria. Built in 1866, it elegantly blends traditional Bulgarian architecture with the European influence typical of the period. The story of its construction also exemplifies the spirit of the times. The tower was built on the initiative of Midhat Pasha, the reformist Ottoman governor, when the erstwhile Samundzhievo village was promoted to a city called Orhanie (it became Botevgrad in 1934). The tower is the sole remains of the old town, which was replaced by an ambitious new centre in the 1970s and the 1980s. The clock still works. 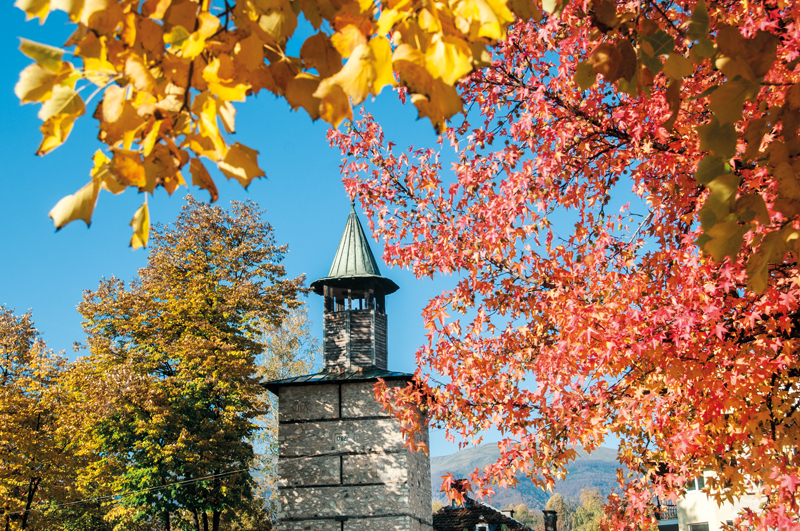 Today Berkovitsa is but a sleepy backwater in Bulgaria's Northwest, the EU's most economically depressed region. Its clocktower is one of the few reminders that it was not always like that. Built in 1764, it had a clockwork mechanism brought from faraway Bessarabia, near the Dniester River. The tower is 21m high and has the fortress-like appearance typical of the period. 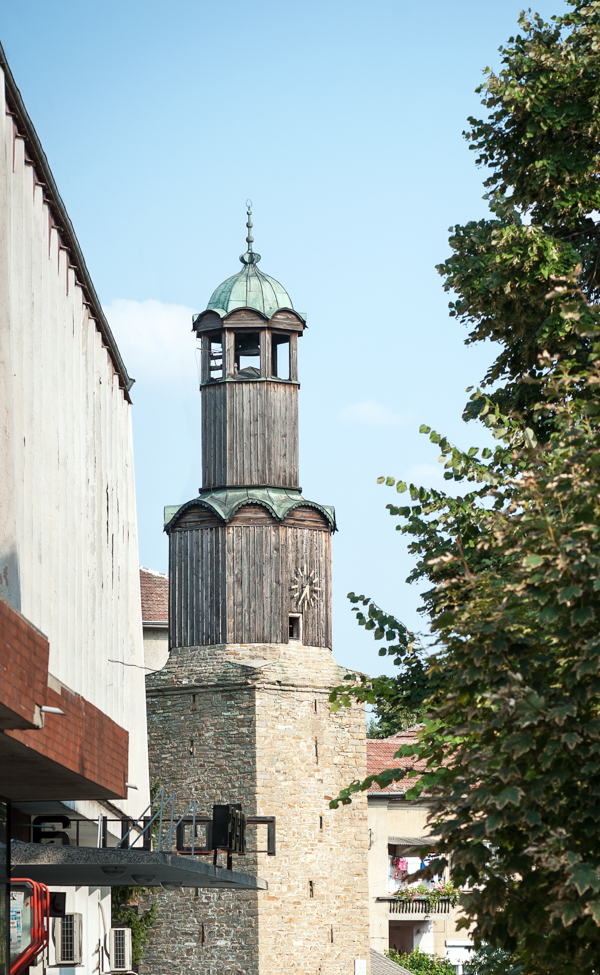 Whether it was built in 1775, 1777 or 1779 is a question historians disagree on, but one thing is certain: Sevlievo's clocktower is one of the oldest preserved in Bulgaria. Today it is one of the few historical landmarks in the town. 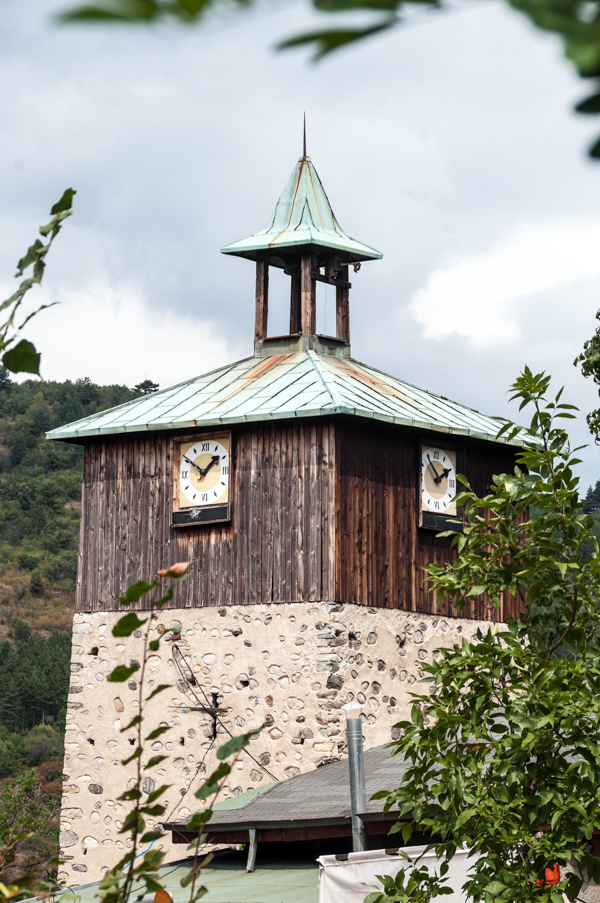 Perched on an hill overlooking the town, Dupnitsa's clocktower has a chequered history. It was built in the 1780s as a defence tower for a local Ottoman ruler, but soon afterwards was fitted with a clockwork mechanism. Some claim that the mechanism was made by local craftsmen, while the bell was imported from Vienna. In the 20th century, electronics were added to the old mechanism. When, several years ago the clock stopped, it was a shock for the locals, who considered the clocktower to be the symbol of their town. The mechanism was put back in working order in 2015.