The weaving workshop is a good place to buy traditional rugs

When Lazar Donchev, the founder and first manager of the architectural and ethnographic museum complex at Etara died in 1976, his private study became one of the exhibits. His records and personal diary were left on the old desk, contributing to the mythical aura of the man who created from scratch Bulgaria's only open air museum, on the banks of the river Sivek, eight kilometres from Gabrovo.

Donchev wrote in his memoirs: "Recent expositions have failed to help visitors feel a connection with the past. That is why it occurred to me to create a functioning open air museum… so the past comes to life, and we come to understand more deeply a monumental national treasure which is so worth preserving."

A brief glance at Bulgaria from the beginning of the 1960s is enough to show why Donchev's idea is the unexpected but inevitable result of something bigger – the building of a Communist society. As early as the first years after the 1944 Communist coup, the whole country underwent an extensive reconstruction programme which lasted into the 1980s. Entire neighbourhoods and old city centres were demolished to make way for Socialist monstrosities and lifeless, marble-paved squares.

The former Communist Party headquarters, the Largo and NDK in Sofia are the most grandiose testimony to these changes, but not a single city was spared, Gabrovo being no exception.

At the beginning of the 19th century, the residents of this little town on the northern slopes of the Stara Planina discovered that the River Yantra, which flows through it, could be used for purposes other than irrigating their gardens, such as powering flour mills, and then the primitive tumble washers for the locally-made textiles sprang up on the banks of the river. 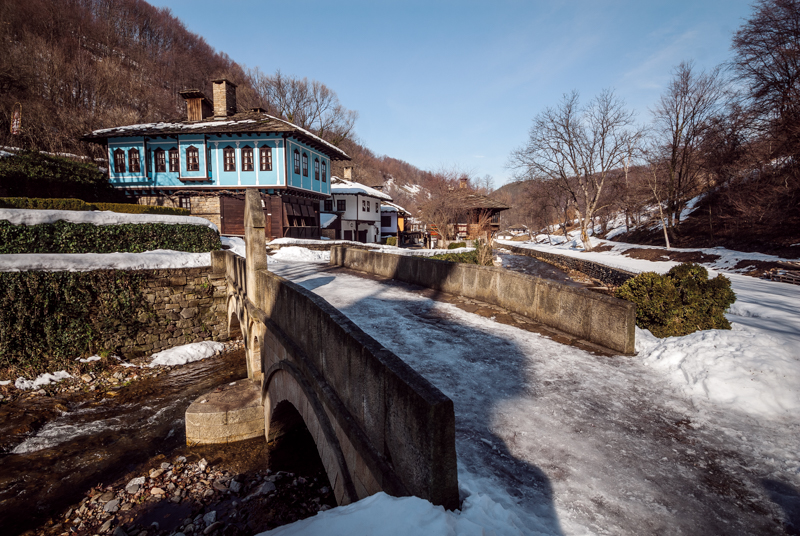 The planning of the museum, with traditional stone bridges spanning the river, mirrors the layout of a 19th century Bulgarian town

By the end of the century, the textile industry had developed at such a fast pace that Gabrovo was nicknamed the "Bulgarian Manchester." Renowned as Bulgaria's stingiest and at the same time most jocular people – the Scots of Bulgaria, some would say – the citizens of Gabrovo nevertheless used some of the money they made to build fine houses.

After Communist reconstruction, very few of the old houses in Gabrovo remained, including the Clock Tower and the Baev Bridge. Uniform new blocks of flats were built in their stead.

Some of the old Gabrovo houses were more fortunate. They were moved – along with some buildings from the surrounding villages – to the Etara museum to become props symbolising the authorities' apparent concern for Bulgaria's past. The rest of the houses in the complex are copies.

No matter how they ended up in the Etara museum, their purpose was to replicate perfectly the life of Bulgarians in Revival Period Gabrovo. For example, the distinctive Sakova House in the High Street, its second storey walls painted a vibrant blue, illustrates the life of wealthy residents in the transition between two ages. They used the new Western style chairs, exquisitely crafted tables, modern lighting and European beds and wardrobes. At the same time, however, life still revolved around the big traditional hearth, and the household continued to lounge on old style couches, cushioned with thick pillows.

Outside, in the cobbled street, the Clock Tower – a replica of the one in Dryanovo, and not particularly accurate – marks the time. Ice cold mountain water gushes out of the old fountain – use the old-fashioned copper ladle to have a sip. Tourists use either the wooden bridge or the two stone ones to cross the Sivek River, while in the workshops craftsmen work according to 150-year-old methods.

You can see the waterwheels in action, powering mechanisms originally used for everything from grinding flour to treating and softening textiles from the time when Gabrovo sold goods to the Ottoman army. The town produced such things as knives, decorative fabrics and knitted woollen braids, used to decorate clothes. The oldest building in Etara, a 1780s mill, grinds flour to this day, and one craftsman still paints psychedelic colours on carts.

The cobblestone street is the main commercial area of the complex and bustles with life. It has been designed as a replica of the old market street of Gabrovo. The ground floors of the buildings house the small shops, where artisans made and sold their wares. People normally lived on the second floor.

Nowadays no one lives in the 16 houses along the street, although the shops are crowded. Most of the craftsmen try to attract potential customers with their hand-made goods and their even more hands-on methods of production. Potters spin their wheels, woodcarvers are covered in shavings as they work.

The tiny street echoes with the ring of the metal forged by coppersmiths. Some shops are naturally quieter, such as those of the iconographers, the silversmiths and the weavers of colourful rugs.

The small confectionery shop, however, is the most appealing. The confectioner's sugar peacocks, sesame sticks and walnut sweets are one of the most authentic experiences in the Etara museum. They are sweet enough to give you toothache and take you back to a time when the word "chocolate" was unknown in Bulgaria. 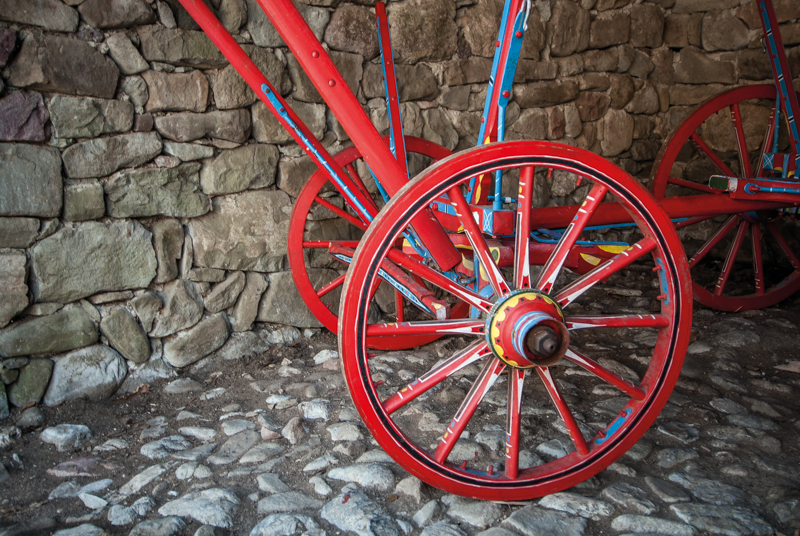 Paint to impress: Decorating your cart's wheels was de rigueur in old-time Bulgaria

Etara has an impressive collection of ethnographical objects and regularly hosts scientific conferences and symposia. The curators tried to make the place as authentic as possible, but at first neglected to add a key element that would make it truly so: a church. They began to remedy this omission in 1993, when a votive stone dedicated to St George was placed at one end of the complex.

Gradually, several old tombstones appeared alongside it. In 1998, a programme was launched to raise funds to build the church that stands there today. This replica of the Epiphany church in Radovtsi, built in 1868, was consecrated in 2006. 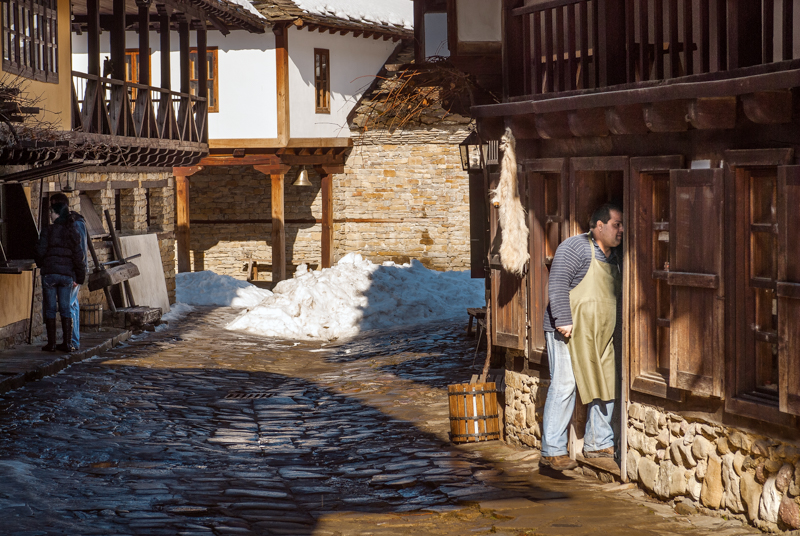 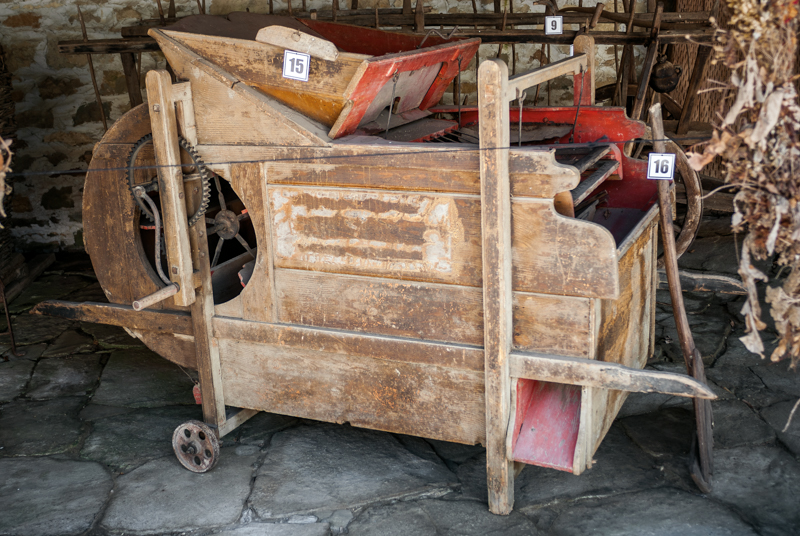 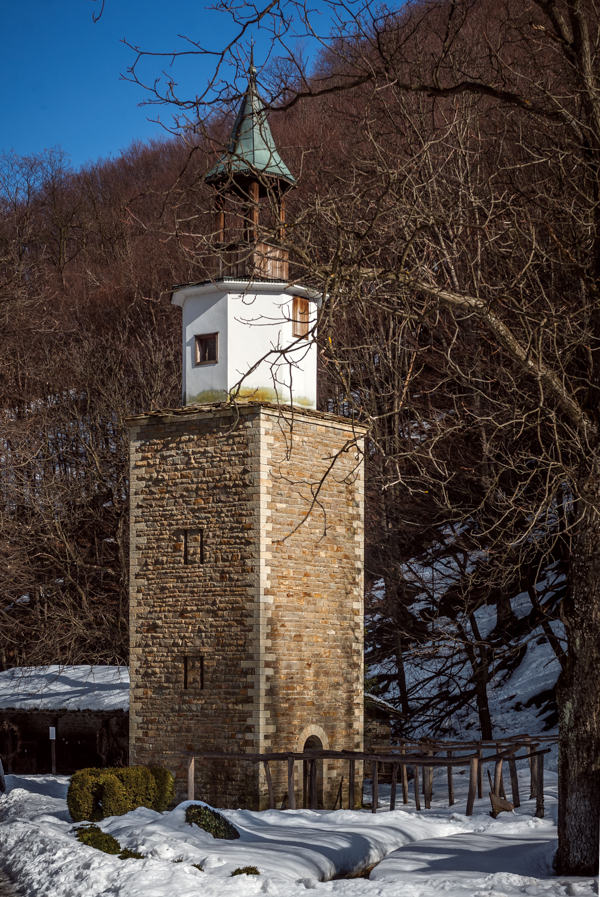 This clock tower is a copy of an actual one, located in Dryanovo