CREATORS OF THE BULGARIAN STATE

Prince Boris I, the ruler who made Christianity the official religion and who welcomed the disciples of Cyril and Methodius, the creators of the Slavic alphabet. His decisions played a significant role in defining what is modern Bulgaria. His statue represents him sitting on a throne, bent forward, his eyes fixed on the future

Built under Communism, this larger than life monument in Shumen continues to awe

Japanese tourists often cannot believe their eyes when they alight from their buses and head towards the Creators of the Bulgarian State Monument in Shumen. For them, the statues of the rulers of the First Bulgarian Kingdom look as if they have come straight out of an anime classic like Voltron or Beast King GoLion.

The creators of the monument, of course, did not aim for such an effect. Their purpose was to create an imposing construction in a particular, expressive style. In the process, they created probably the largest monument of exposed concrete in Europe, featuring 21 statues and an incredibly huge mosaic.

The idea of building a monument on top of the Shumen Plateau, which rises above the plain where Bulgaria was founded in 681, was promoted in 1977. This was the time when Lyudmila Zhivkova, the daughter of Todor Zhivkov and chairman of the Culture Committee with the rank of a minister, did not think twice when she spent (often non-existent) funds for the construction of monuments, filming of feature movies and organising festivities to mark the 1,300 years of the foundation of the Bulgarian state.

Shumen was chosen because it was close to the ruins of mediaeval capitals Pliska and Preslav, and because of the domineering position of the plateau that would make the future monument visible from miles around. The monument was dedicated to the First Bulgarian Kingdom, whose core was in this region between the end of the 7th and the end of the 10th centuries. 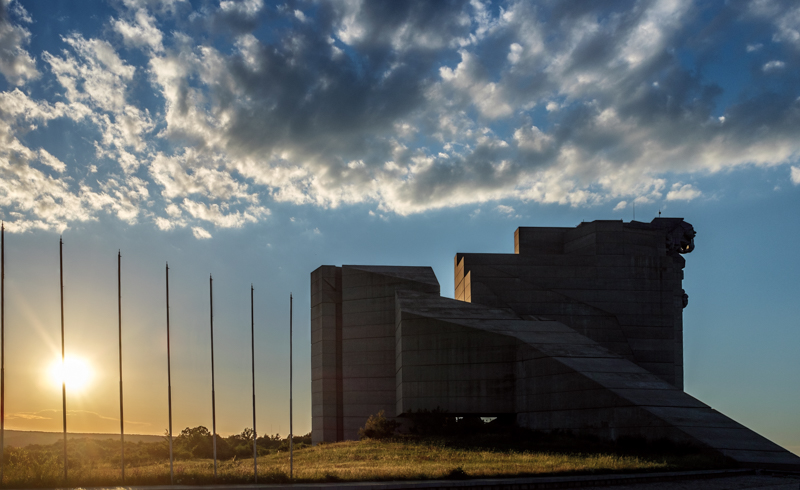 The monument was inaugurated in November 1981.

The result was truly impressive. For the construction, which is 70 metres high and 140 metres long, 2,400 tonnes of reinforced steel and 50,000 cubic metres of concrete were used. Two rising structures symbolise the upward spiral of Bulgarian national evolution.

The narrow passage between them is inhabited by statues of the most important rulers in early Bulgarian history.

The first part of the complex was dedicated to the pagan period, and was dominated by the figures of Bulgaria's founder, Khan Asparuh, his son Tervel, and the khans Krum and Omurtag. The theme of the complex's second part was Christianisation, the creation of the Slavic alphabet and the state's military power. It included statues of Prince Boris I and King Simeon the Great, and a huge mosaic in white, black, red, and gold. The symbolism is rich. When the visitor is in this part of the corridor and looks up the two structures of the monument will be seen forming a cross.

The most imposing element of the Creators of the Bulgarian State (the monument is also known as 1,300 Years Bulgaria) is best seen from distance. This is the 1,000 - tonne lion made of 2,000 pieces of granite adorning the highest part of the structure.

According to local lore, the lion is hollow, and can be accessed via an elevator, which only top party leaders could have access to. 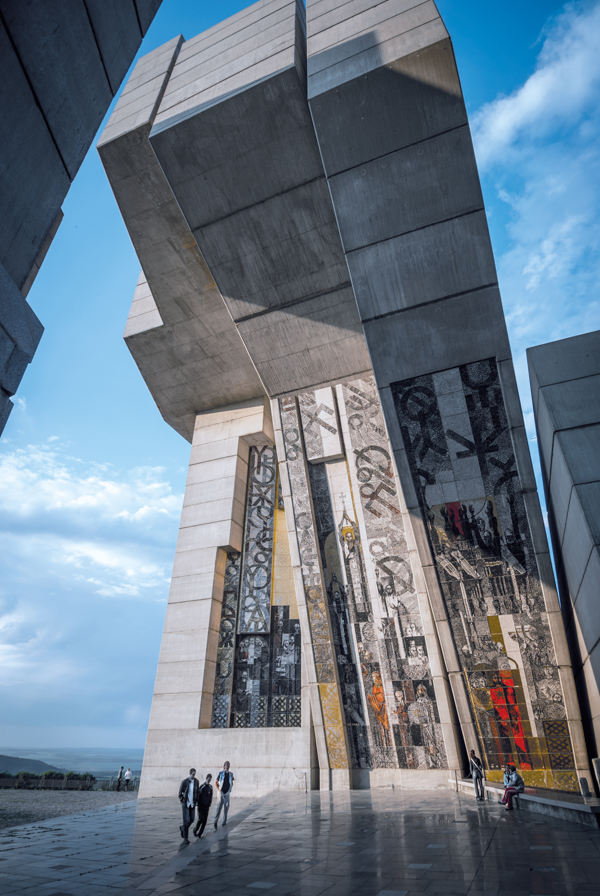 The monument's inauguration, attended by Todor Zhivkov, was the key event in the celebrations of Bulgaria's 1,300th anniversary, which for the locals also included additional benefits like an aluminium factory in Shumen and a new building for the history museum in Preslav. Not all were happy with the monument, however. Even today you can hear Shumen natives complaining that at the time of economic difficulties and lack of proper housing the state invested such an amount of money and steel in a monument instead of building a few new housing projects. Others, of course, are proud with their monument, which today is a favourite location for wedding photos.

After the collapse of Communism, the maintenance funds for the monument ran out. In 2006, one of the hooves of Khan Asparuh's horse fell off and was replaced with a replica of artificial stone.

There are two ways to reach the Creators of the Bulgarian State – climbing the 1,300 steps of the grandiose staircase that starts at the theatre in Shumen, or by car. The monument is about 6km from Shumen. 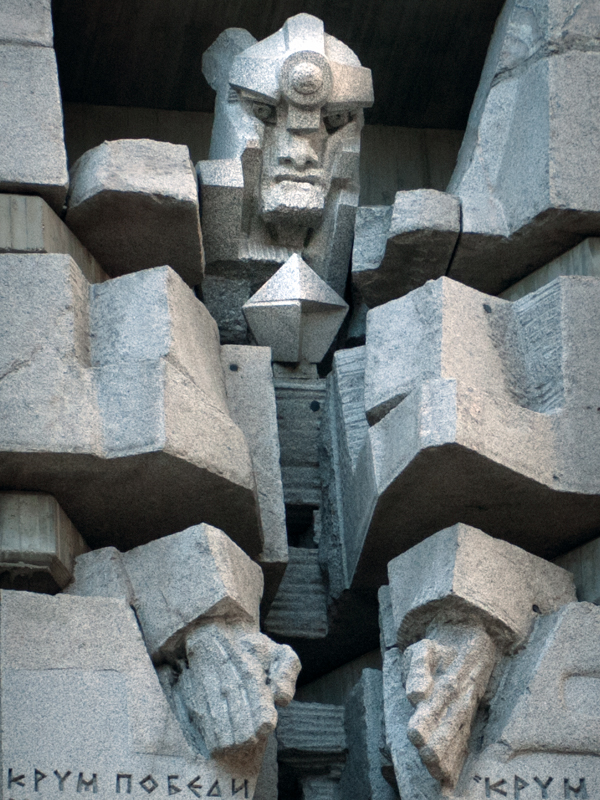 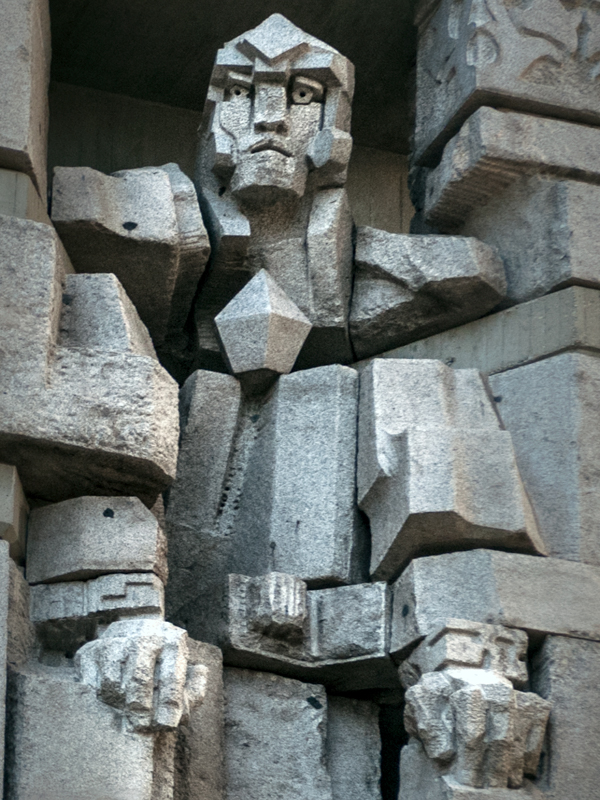 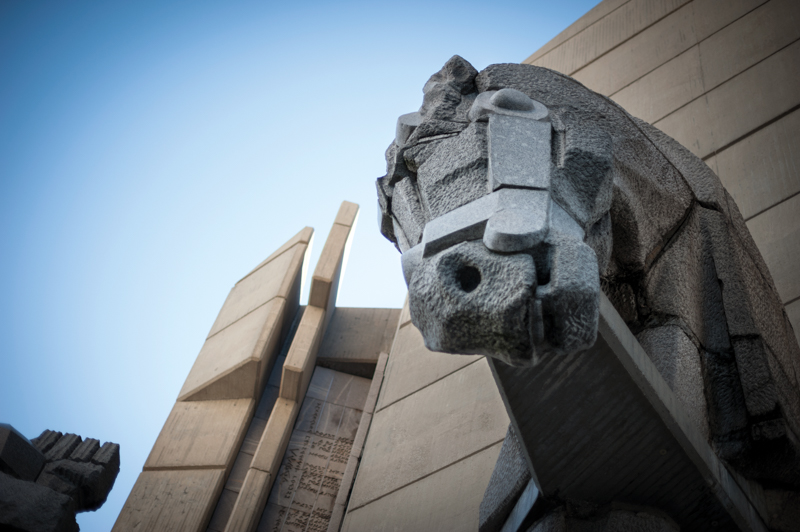