This statue of Lenin stood for years, face down, in the back garden of the National Art Gallery in Sofia

If you could (or would want to) go back in time 29 years and visit Communist Bulgaria, your trip would unfold under the constant presence of one man, Lenin. There was hardly a place in Bulgaria – big city, small town, village even – without a monument to Lenin, or at least a street, school, or kindergarten named after him. Sofia, the capital, had a tall statue of Lenin in front of the Largo, where the main institutions of the People's Republic of Bulgaria were: a visual addition to the line of highly charged monuments that included the one to the Red Army and the statue of the Tsar Liberator, or Russian Emperor Alexander II.

Portraits of Lenin hung in every school and were paraded at the mass demonstrations celebrating 9 September, the day of the Communist coup in Bulgaria in 1944, and 7 November, the day of the 1917 October Revolution, which overthrew Imperial Russia and installed the Bolsheviks in power over what would become the USSR. Students used to study "Leninism," a particular take on Marxism considered to be the only viable ideological view of the theories of Marx and Engels. It was Lenin who said that, before reaching the utopia of Communism, society should first go through Socialism, and who stipulated that the road to the coveted dictatorship of the proletariat is paved with a violent revolution.

Lenin was venerated across Bulgaria as the perfect poster boy for Communism. Even when the personality cult of Stalin began to crack, in the mid-1950s, that of Lenin survived intact.

Born into a middle class Russian family, nothing at the birth of Vladimir Ulyanov in 1870 suggested that he would become a man who would turn the world upside down. In 1887, however, his elder brother was executed for his participation in a botched plot to assassinate Emperor Alexander III, and this radicalised young Vladimir. He became a prominent figure in the nascent Socialist movement, and after a three-year internal exile was forced to leave the country. In the following years he led an itinerant life, living at various times in Munich, London, Geneva and Cracow, and was responsible for creating a breach in the Russian Socialist movement. He headed up its radical wing, the Bolsheviks. He campaigned, in absentia, for the failed 1905 revolution and, when the First World War broke out, he called for the conflict to escalate into a global proletarian revolution.

This happened, in a way. In 1917, the Germans were desperate to get Russia out of the war. The country had already undergone a democratic revolution, in February, but Germany needed more. Chaos in Russia was seen as an opportunity for Germany, so Lenin, a known agitator, was arrested by the Germans and put on a sealed train heading for Saint Petersburg (from 1924 to 1991 the city was called Leningrad). He began propagating a revolution immediately upon arrival, and soon the Bolshevik October Revolution erupted. 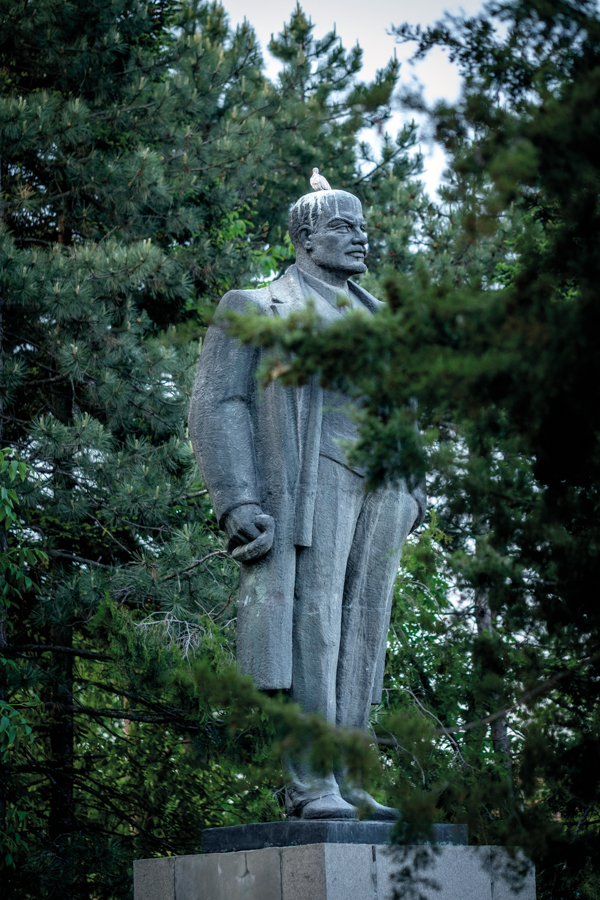 With Lenin at the head of the new Bolshevik government, Russia experienced a series of rapid, often brutal changes. It withdrew from the First World War. The royal family was executed, and the Bolshevik government did away with private property. There was a bloody civil war between the Red Army and supporters of democracy joined by royalists. There was famine. There were plans to export the revolution to Europe, including Bulgaria and, in a bitter twist of historical irony, to Germany.

Meanwhile, Lenin was becoming an international celebrity, visited by the likes of H.G. Wells and Bertrand Russell.

His health, however, was in steady decline, which effectively crippled him in the later years of his life. He died in 1924 and was succeeded not by Leon Trotsky, whom he had favoured, but by Joseph Stalin. Immediately after his death, Lenin was embalmed, and his mummified corpse was exhibited in a specially built mausoleum on Red Square, in Moscow. It is still there, attracting long queues of visitors. In spite of their personal tensions while Lenin was alive, Stalin wisely turned the man who had headed the Bolshevik Revolution and the USSR into the founding symbol of the regime.

The cult of Lenin spread all over the USSR and, after the end of the Second World War, to its satellites. Bulgaria was no exception.

Lenin began to disappear from public spaces in Bulgaria soon after the democratic changes of 1989. Unlike monuments of partisans and the Soviet Army, there was little debate over whether Lenin's images should be removed or demolished, and the streets, schools and so on were renamed. In the process, a significant number of monuments and statues were lost forever, particularly those of bronze, which were sold cheaply for scrap metal.

Some of Lenin's images, however, survived, preserved by private collectors, galleries, and municipalities. The best way to see many of them – from the monument that stood on the Largo until 1991 to desktop Lenins to paintings and other visual propaganda featuring him – is to visit the Museum of Socialist Art in Sofia (7 Lachezar Stanchev St). 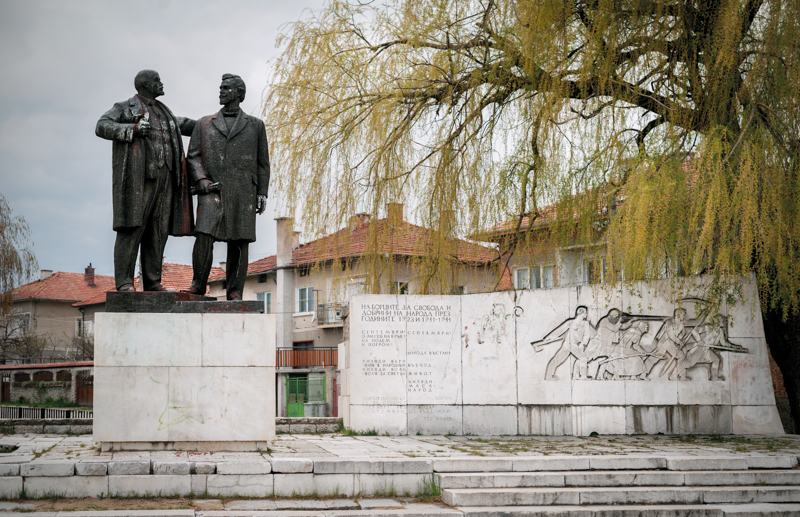 Monument of Lenin and Georgi Dimitrov, Banya village, near Razlog

The other is to undertake a trip around Bulgaria that will take you to places which, with one exception, you would otherwise never visit.

The village of Novgrad, near Svishtov, in Northcentral Bulgaria, is proud to be the only place in the country that has kept its official, life-size Lenin intact. The bronze statue in the village centre is not particularly good, but as Novgrad lacks any other claim to fame or tourist interest, the locals love it. Rumours that the owners of the land on which the monument stands plan to sell it appear regularly, but so far have proved to be unfounded.

The people of Novgrad are not exactly correct in their claim for uniqueness. Banya village, near Bansko, in the Southwest, has a life-size statue of Lenin together with Georgi Dimitrov, Bulgaria's first Communist dictator. The people of Banya love their monument as their brethren in Novgrad do, and have an interesting story about it. The double statue was commissioned by a local man who emigrated to the US in 1912. In the 1960s he donated a significant amount of money to his native Banya that, according to his wish, should be spent on a new a community centre and… the aforementioned monument of Lenin and Dimitrov. Did Lenin and Dimitrov know each other? It is highly improbable, but Dimitrov did attend the second congress of the Comintern in 1920. He could have met Lenin there. According to local mythology, the two knew each other well enough for Dimitrov to be one of the men who carried Lenin's coffin, together with Stalin and Trotsky.

The other two surviving monuments of Lenin are neither large, nor popular.

A metal bust of the leader of the October Revolution is now gathering dust among rusting industrial paraphernalia in the yard of a factory, in Nikolaevo village, near Kazanlak. Under Communism, the factory was, of course, named Lenin. The bust is the only thing that remains from these times. 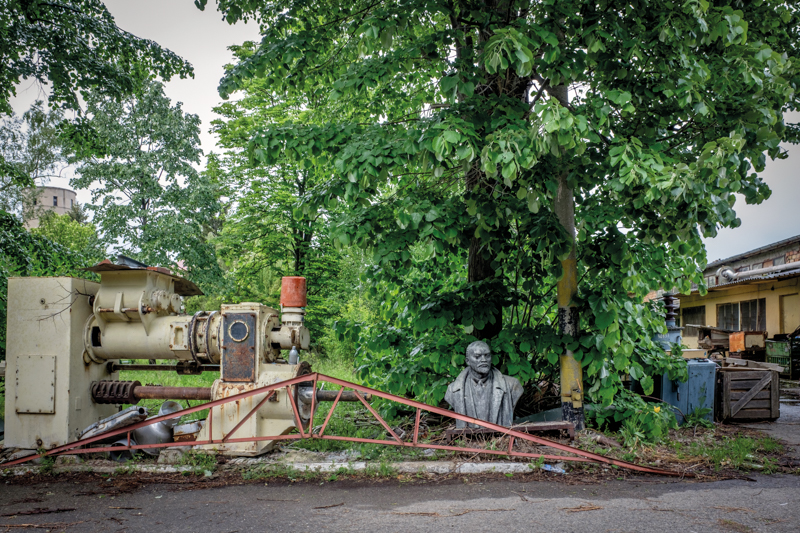 Bust of Lenin in the yard of a factory that used to be named after him. Nikolaevo village, near Kazanlak

On Veliki Preslav Street, in central Shumen, in the garden of one of those better-quality apartment blocks built under Communism, stands a strange figure: A man in a cloth cap protectively embracing a boy and girl. The trio's eyes are fixed on what should be the bright Communist future. When Shumen's Lenin appeared is not clear. In a city famed for its visually stunning monument to the 1,300 years of the foundation of Bulgaria, smaller statues tend to go unnoticed.

The Shumen Lenin is also the only one bearing clear traces of vandalism.

Curiously, while Bulgaria is still struggling to understand and make peace with its Communist past, it parted relatively quickly with the memory of Lenin, the very man who brought about Communism, and changed the world forever. 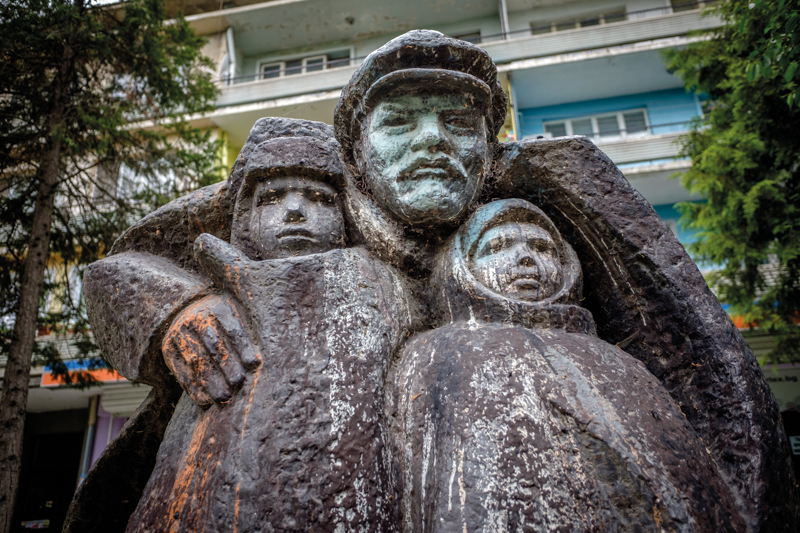 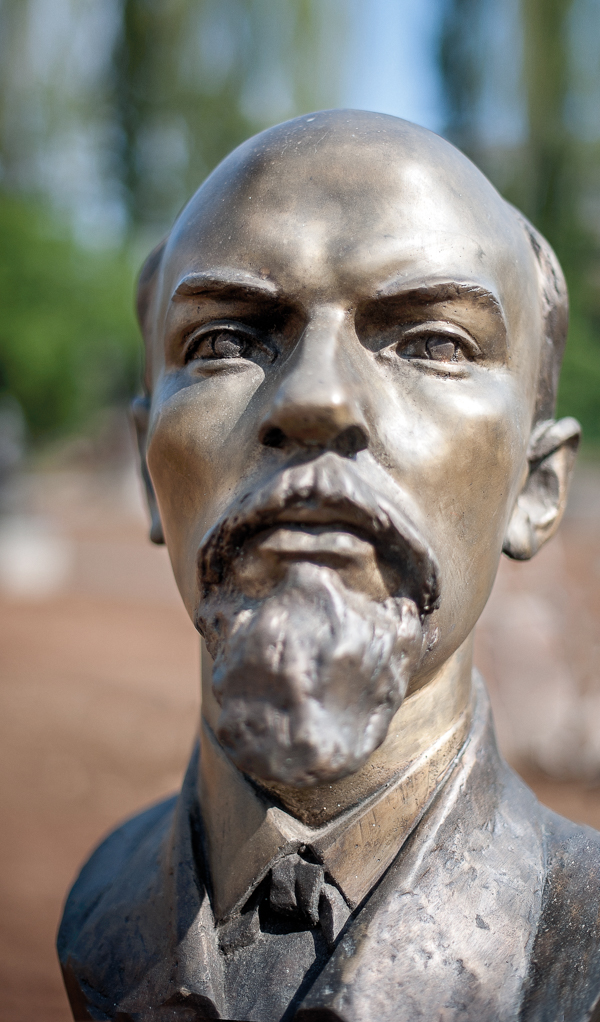 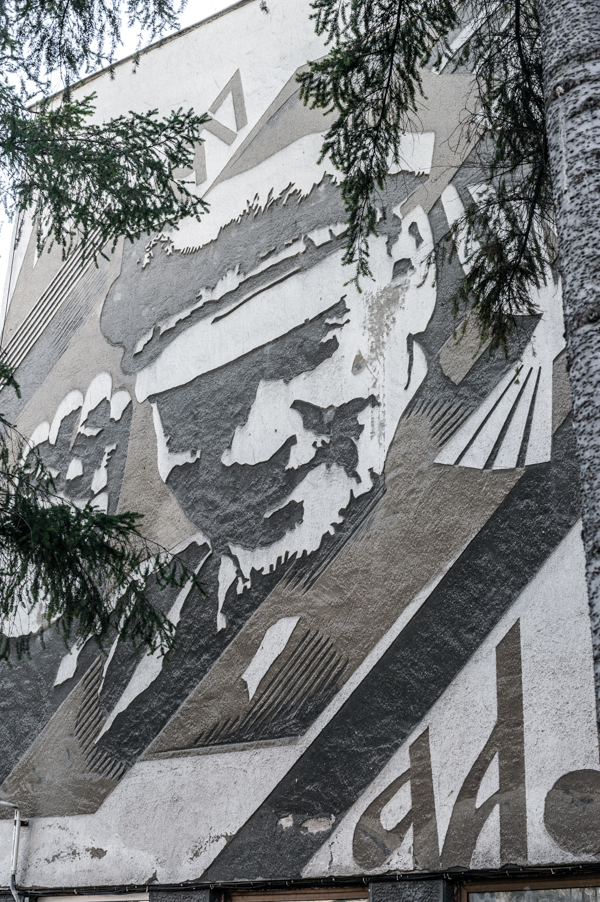 Graffito of Lenin on the wall of a school, Sofia