Ahtopol has its own peculiarities, like these objects of primitive art by one of the local fishermen

In the past decade, it has become increasing hard to love the cities on the Bulgarian South Black Sea coast, even for those who have many pleasant memories connected with them. Nesebar and Sozopol have lost their erstwhile charm as quiet havens of traditional old houses, meandering lanes, fishermen and bohemians. Under a deluge of cheap alcohol tourism from the West, holidaymakers from Russia and Bulgaria have descended on them in search of luxury in the form of beach-loungers, all-white restaurants and atrocious food at even more atrocious prices.

Ahtopol, south of Sozopol, stands against this tide. It is still possible to love it.

This town of about 1,400 inhabitants shares the origins, the outlines, and the historical fate of Sozopol and Nesebar. It was founded in 430 BC, on a rocky peninsula, as an ancient Greek colony. It was called Agathopolis, the City of Love, and this name still survives, in its present form.

Agathopolis was never on a par with the major powers in the region, Sozopol and Nesebar. Even in the times of its greatest prosperity, when it minted its own coins (in Antiquity) and was the seat of a bishopric (in the Ottoman period), it always had a provincial feel. By the beginning of the 20th Century it was a relatively humble but lively fishing community, mostly made up of Greeks who had lived there for generations. After the Balkan Wars of 1912-1913, the majority of them left and were replaced by Bulgarians fleeing the Ottoman Empire. In 1918, disaster struck: a fire ravaged the city, leaving almost nothing of its old houses and archaeological remains.

In storms, the Ahtopol's lighthouse is even more picturesque than in calm weather

When, under Communism, organised tourism finally reached Ahtopol, the city lacked the interesting architecture and the fine beaches of its neighbours, Sozopol and Nesebar. Moreover, it was too close to the strictly guarded border zone with Turkey. Most the organised tourism here consisted of holiday facilities, mainly bungalows, for workers and staff of culture institutions. The rest of the business was left to local families who would rent rooms in their houses to stray holidaymakers.

Travelling along this part of the Black Sea coast is easy now, but Ahtopol remains provincial, the resort of blue collar and lower middle class Bulgarians who cannot afford a holiday in more "prestigious" parts of the coast, or Turkey and Greece. Some of the old holiday facilities have been abandoned, and new hotels have appeared, but local old ladies continue to line up at the entrance of the city, offering rooms to those arriving for a holiday.

The holiday-makers in Ahtopol definitely have their shortcomings, mostly in the occasional blast of chalga here and there, and the chaos of the main pedestrian street in the evenings, but they are the very reason why Ahtopol remains the quiet, provincial, fishing city that is so alluring, with its unpretentious atmosphere (unlike the once sleepy village of Lozenets that, after Sofia's "elite" discovered it, turned into a hell of what passes for luxurious in Bulgaria).

The oldest part of Ahtopol, on the rocky peninsula, has been almost unchanged for the past 40 years: a labyrinth of narrow streets, low, post-1918 houses, fig trees, cats, old ladies preparing fresh fish and old men gathered in their tiny gardens remembering times past, drinking cheap rakiya or mastika. 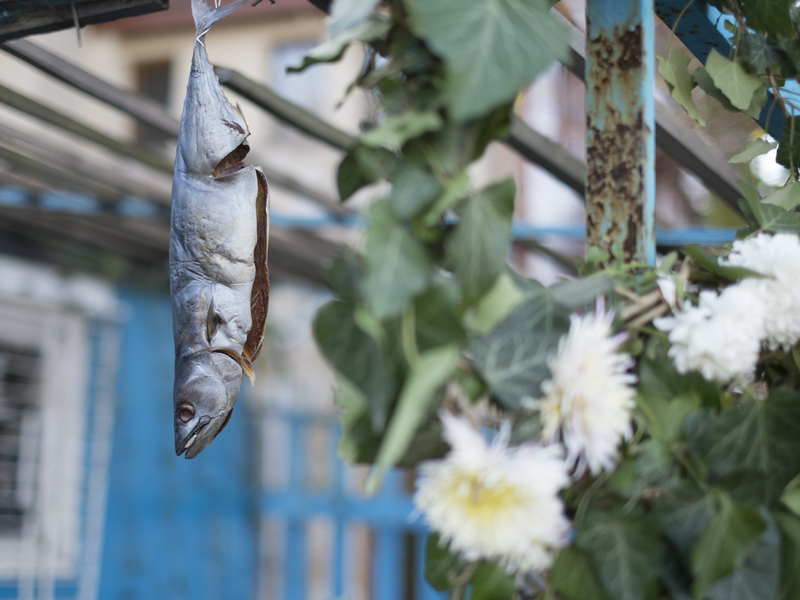 Ahtopol is the best place in Bulgaria to taste Palamud

There are a couple of sights to add to this: the low and dark Assumption church, built in 1776, and the old school, picturesquely perched on the edge of the wind-blown cliffs. Ahtopol's promenade is, actually, one of the most rewarding on the Bulgarian Black Sea coast. Come here for views over a bay filled with colourful fishing boats, for the lonely silhouette of a lighthouse on an isolated rock in the sea, and for the constant murmur of waves breaking on the cliffs of the peninsula where old Ahtopol stands. In stormy weather, you will experience the awe that we feel when meeting nature unleashed, face to face.

And there is the fish. Ahtopol is the unofficial Bulgarian capital of one of the Black Sea's tastiest and most sought after fish, Palamud, or bonito. A migrating species, Palamud schools only visit the waters of Bulgaria at the beginning of winter. Ahtopol is the place with the greatest concentration of the fish but, due to pollution, the catch is always unpredictable. This year it was a disappointment, but Ahtopol itself does not disappoint, and in 2016 it will remain as quiet, genuine and pleasant as it used to be in the past.

The sea, seen from the top of the peninsula where old Ahtopol is

Letting rooms to holidaymakers is not enough for local families to make ends meet, many men still rely on the profession of their forefathers - fishing