The antechamber of the Assumption of the Lady Convent, with the supposedly miraculous icon of the Virgin Mary to the right © Anthony Georgieff

Technicolor murals, claustrophobic spaces and 'miracle-working' icons coexist in one of Bulgaria's most popular traditional villages

Comfortably spread out on a narrow plateau overlooking the dramatic landscape of Veliko Tarnovo, the traditional village of Arbanasi is something of a conundrum. It is an architectural heritage site, yet it is filled with mansions and hotels in dubious "traditional" style, all built in the past 15 years. Most of its genuine, cosy yet sturdy houses from the 17-18th centuries are hidden behind the massive stone walls which once protected their owners from brigand raids, and your only chance to peek inside is to dine in some mansion which has been turned into a restaurant or to visit the two houses which are now museums, the Hadzhiilievata Kashta and the Konstantsalievata Kashta.

This strange situation may lead you to conclude that Arbanasi is only worth visiting for its views towards Veliko Tarnovo and for the Aegean air which, according to a local urban legend, arrives here after crossing thousands of kilometres and two mountain ranges. For most of the Bulgarians living in the surrounding towns and villages, Arbanasi is indeed just that – a place for a quick escape from everyday life. What they do here is to stroll for a few minutes around through narrow streets jammed with the expensive SUVs of visiting nouveaux riches, and then to have coffee in one of the bars which, since the early 2000s, have popped up on all the spots with the best views. 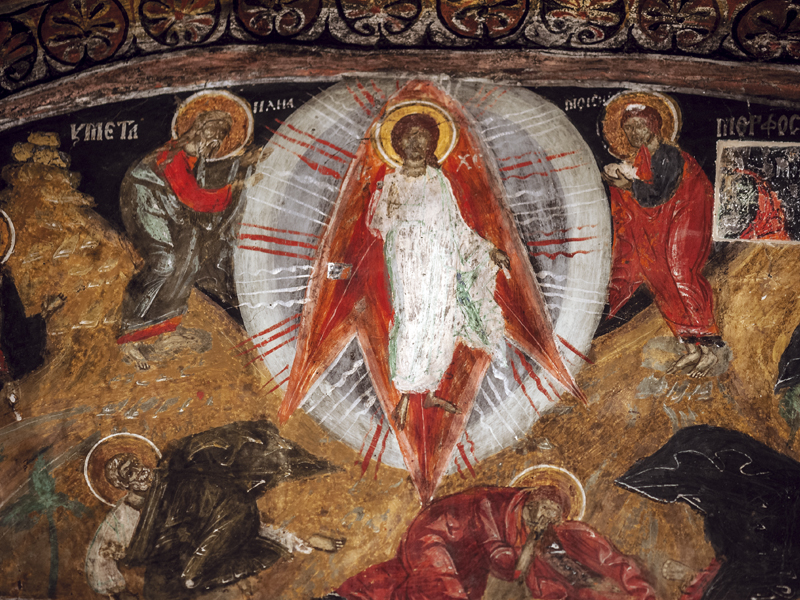 However, Arbanasi really is worth a proper visit, because of its churches. Two of them are now museums, two are closed permanently and another two belong to convents.

Built in the time of greatest prosperity, in the 16-18th centuries, when Arbanasi was home to 1,000 households and 11 priests, these churches are heavily painted, tiny, dark, squat spaces, whose walls are covered with naive frescoes of strangely charming religious scenes and portraits of benefactors. The detailing and the state of preservation are astonishing, and you can gaze at these centuries-old faces for hours, until you feel light-headed.

The most spectacular of the six Arbanasi churches is the Rozhdestvo Hristovo, or Nativity, church in one of the most tourist-infested parts of the village. 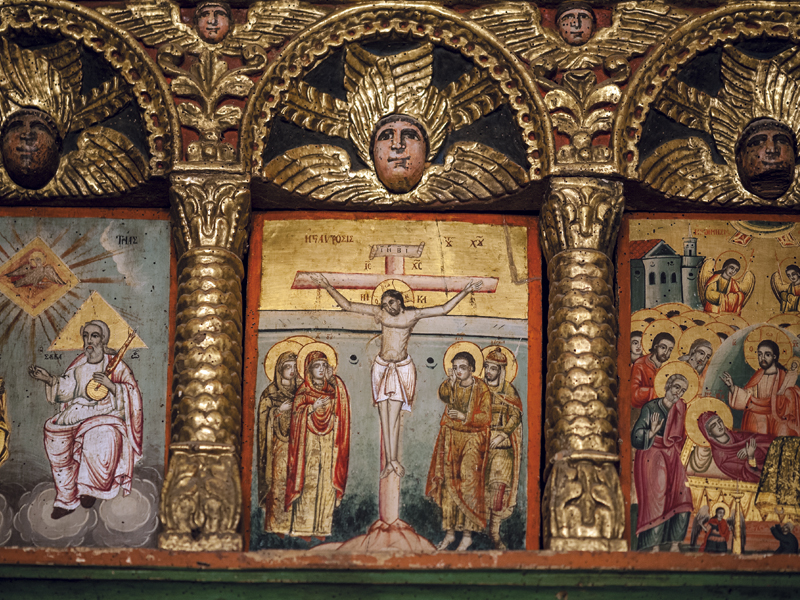 Details from an altarpiece, Nativity Church

From the outside, the 17-18th Century bare stone walls of the church do not reveal anything of the splendid colours, figures and religious drama that await you inside. Separated into several sections, including one for women, the church is a claustrophobic maze of low ceilings and thick walls. Each room of the interior is covered with scenes from the Old Testament mingled with solemn saints and poignant episodes from the Gospels, with a particularly descriptive mural of the Last Judgement, several donation inscriptions and the portraits of two benefactors. 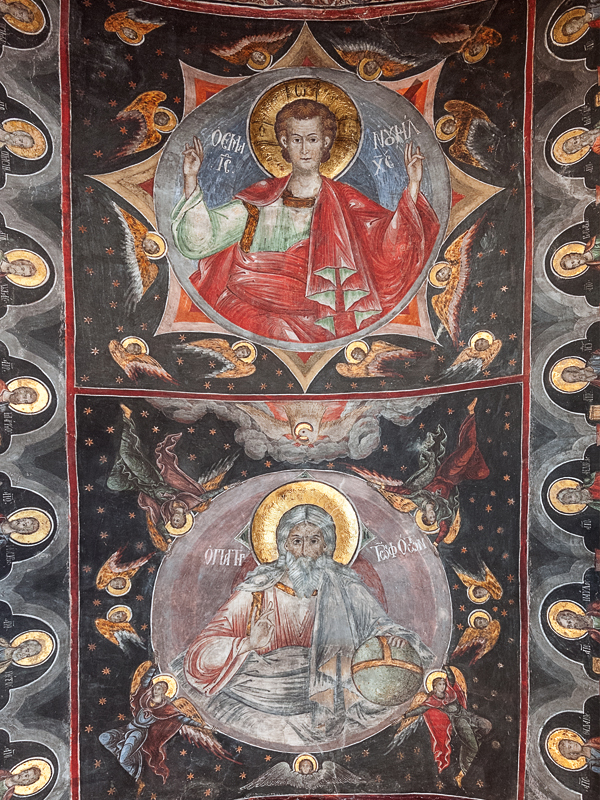 Researchers believe that the interior of the Nativity church is the largest and most detailed description of Christian themes and motifs in Bulgaria. The 17th Century wood-carved altar is also one of the oldest and best preserved in the country.

The Ss Archangels Michael and Gabriel church is bigger and not as overwhelmingly decorated. Situated up a tiny steep lane far from the usual tourist route, it was built in the 17th Century, and painted in the 17-18th centuries. Its murals are as good as those in the Nativity church, but the bigger and brighter space they inhabit make them seem less impressive.

Sadly, the churches of St Demetrios and St George are closed to visitors. As a compensation, you can visit the convents.

The St Nicholas the Miracleworker convent is said to be the descendant of a 13th Century monastery. It was destroyed during the Ottoman invasion at the end of the 14th Century, restored by an Arbanasi dignitary in 1680 and abandoned again a century later, during the bandits raids which devastated this part of the empire. It was again rebuilt at the beginning of the 19th Century and served as the parish church for some time. Its architecture is astonishingly bland, given that it dates from the Revival Period, when so many beautiful monasteries were built in Bulgaria.

Why bother to visit it, then? To see the white tomb in the graveyard of the controversial entrepreneur, Iliya Pavlov, who was assassinated in 2003. Adding to the surreal experience, a few metres away stands the large, white cube of the former residence of the Communist dictator Todor Zhivkov. It is now a luxury hotel.

The Uspenie Bogorodichno, or Assumption of the Lady, convent offers you something the other churches of Arbanasi lack – the combination of a sacred place which is still frequented by believers. Its tiny church was built and painted in the 17th Century, and the generations of people coming here to pray and light a candle have turned it into a dark, cave-like space with sooty walls, from which only the ghostly faces of painted saints peer down. In the antechamber, there is a steady flow of people queueing in front of a silver-clad icon of the Holy Mother of Christ, which is believed to cure incurable illnesses and bring good luck in life. 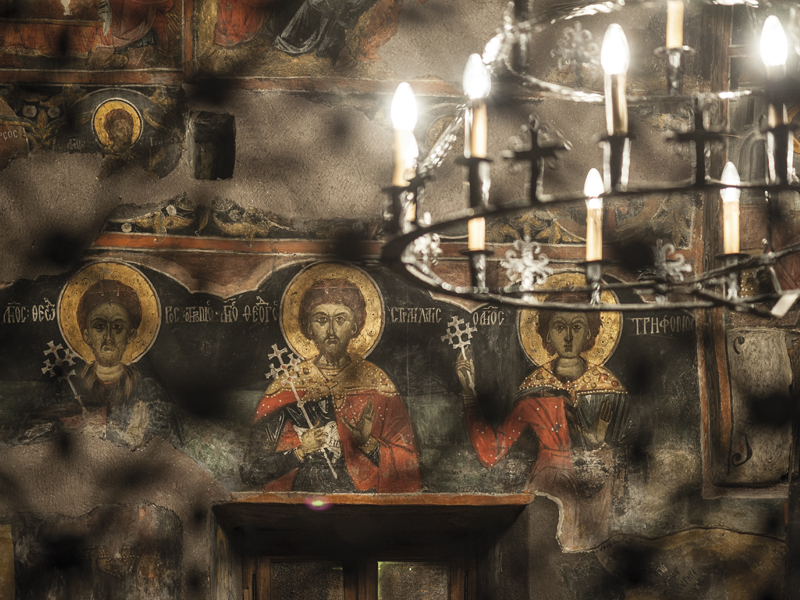 Painters from Bulgaria as well as Albania, Salonika and Bucharest have decorated the old Arbanasi churches

Who were these inhabitants of Arbanasi who had the money to build these churches and monasteries and to commission artists from Salonika, Bucharest and Albania to decorate them? According to the official web page of Arbanasi, they were Bulgarians who had been living in the village since its foundation in the 15th Century.

However, as a number of historical sources and even the name Arbanasi itself suggest that the village's original population was Albanian. An Albanian presence in these parts of the Balkans was not an isolated occurrence, as throughout the Middle ages and the rule of the Ottomans, many Albanians moved east, forming vibrant communities. Many of them were later absorbed into the Bulgarian majority, or resettled in Transylvania at the beginning of the 19th Century. At the beginning of the 20th Century, the only still intact Albanian communities in Bulgaria were those in the Eastern Rhodope. They remained under Ottoman rule until 1912-1913.

The Christian Albanians who founded Arbanasi were probably people from Epirus, resettled here after the Ottoman invasion of the Western Balkans. Here, in their new home, they experienced several centuries of prosperity. The village and its surroundings were the personal property of a long list of Ottoman dignitaries, including a son-in-law of Sultan Süleyman the Magnificent, and the inhabitants were exempt from a number of taxes. This made Arbanasi a favoured place to do business, be it to produce wool, meat or jewellery, and to trade throughout the empire. Inevitably, other nationalities began to arrive, increasing the village population fourfold in the span of several decades. At a certain point, Arbanasi had a population greater than neighbouring Tarnovo. The Greeks became so numerous that other ethnicities in the village adopted the Greek language, while in the 18th Century, exiled Wallachian aristocrats joined the mixture.

Most of these people – Albanians, Greeks, and Walachians – left Arbanasi during the bandit raids of the 18th Century, and never returned. By the beginning of the 19th Century, the village population was already predominantly Bulgarian. 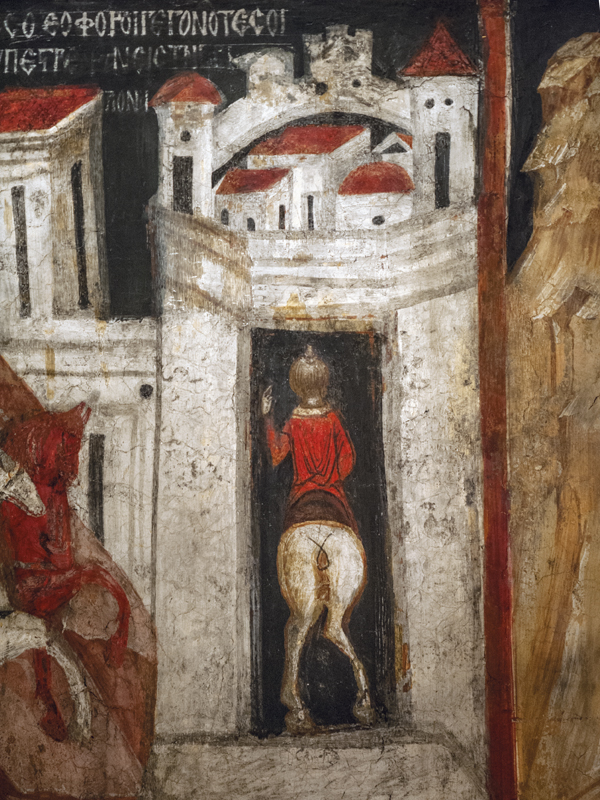 In spite of their general mediaeval feel, the Arbanasi murals often depict with charming naivety and vividness scenes from everyday life 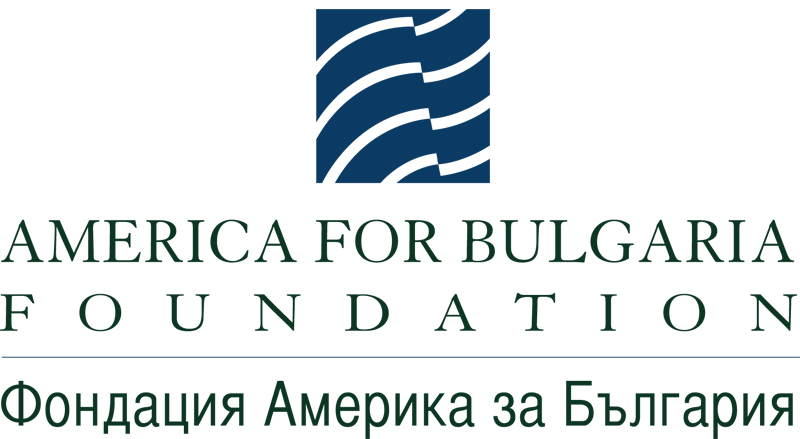