The Devil's Bridge near Ardino, in the Rhodope, is 56 metres long and 13 metres high

Heritage from five centuries of imperial domination abounds throughout country

As you travel through Bulgaria you will inevitably be confronted by remnants of its Ottoman past: mosques, water fountains, bridges, forts, baths and public buildings. It would be strange if you were not – Bulgaria spent 500 years under Ottoman domination. It began with the invasion at the end of the 14th Century, which brought chaos to the Balkans and destroyed the Second Bulgarian Kingdom, and ended for the different parts of the Balkans inhabited by Bulgarians between the 1878 San Stefano Peace Treaty and the 1912-1913 Balkan Wars. The heritage of the Ottomans, however, remains contentious, provoking sometimes heated debate among Bulgarians, and is more often than not hijacked for political purposes by politicians of various shades and opinions.

The reasons are many, varied and too complex to explain in detail here, but in the minds of the overwhelming majority of Bulgarians those 500 years of "Turkish yoke" were a dark age of an economic and cultural backwater, of blood-letting and slavery, and of atrocities committed by Muslims against Christians. Yet, Bulgarians under the Ottomans were allowed to own property, and managed to ensure the survival of their own national church, set up schools, spoke Bulgarian and traded all over the empire – and abroad. There is little doubt that the Ottomans greatly influenced the lifestyle, culture and landscape of the Bulgarian lands; a new cuisine was developed – you already know the similarities and differences between Bulgarian, Greek and Turkish meatballs and baklava. Turkish, Arabic and Persian words entered the Bulgaria language, and the architecture and the urban landscape also changed, acquiring a distinct Middle Eastern feel that remains to this day. 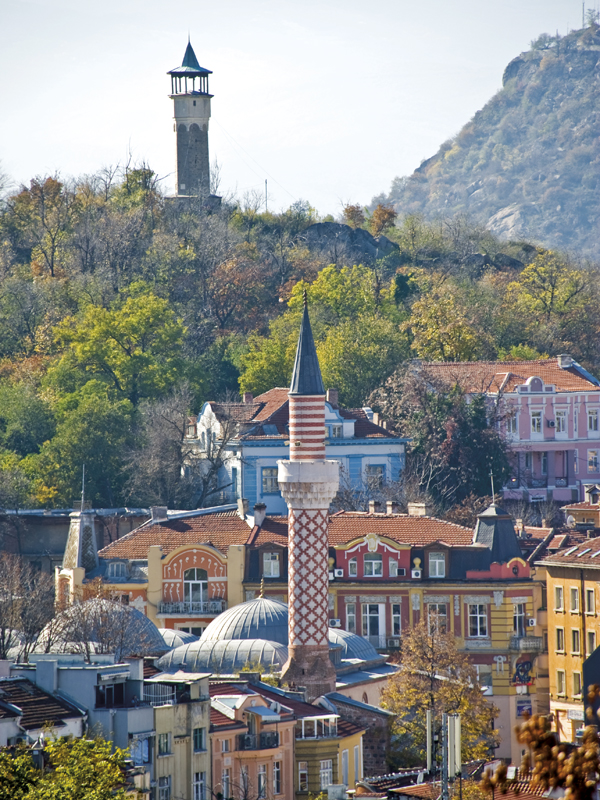 Plovdiv boasts the earliest clocktower in the Balkans, and the beautiful 15th Century Cuma Mosque

Unlike cuisine and language, however, the material heritage of the Ottomans is not obvious everywhere. Most of it was lost during the waves of modernisation in the late 19th-early 20th centuries, and in the mass reconstruction of town centres in the 1960s-1980s. Yet, there are still many fascinating examples of Ottoman heritage, and no visit to Bulgaria would be complete without exploring what will always be a major part of Bulgaria's history. 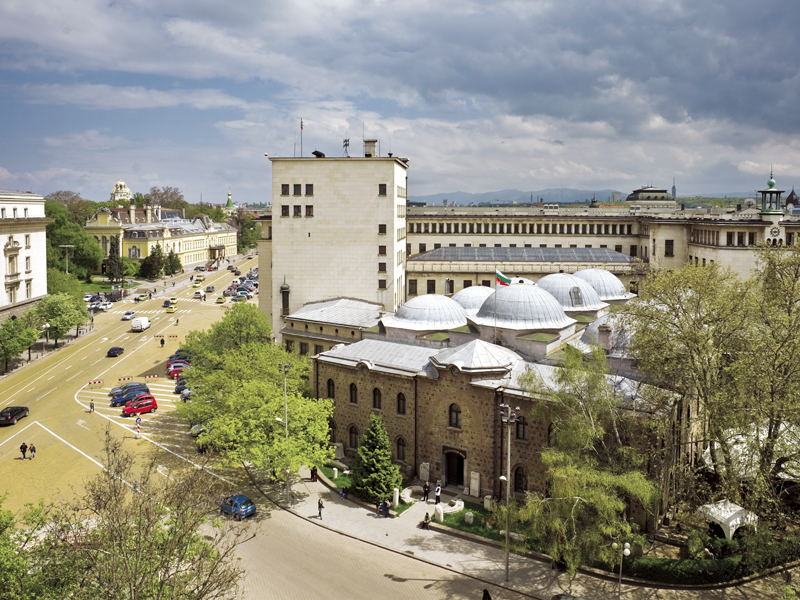 Since the 1880s, Sofia's Archaeological Museum has been housed in a former mosque

Understandably, with their tall minarets, mosques are the most obvious example of Ottoman architecture in Bulgaria. Sofia, which under the Ottomans alternated between prosperity and decline, now has only one functioning mosque, the Banyabaşı. Built in 1576, it stands in the oldest inhabited part of Sofia. The ruins of Roman Serdica lie beneath it, and the steaming mineral springs, the Stalinist Central Department Store, and the bustle of Pirotska Street and the Women's Market are nearby.
In fact, Sofia has two more surviving mosques, but they have been converted into a museum and a church. Built in 1451-1491, the Great Mosque has nine domes, covered with lead. Since the 1880s, the building has been used as a museum of archaeology.

The 16th Century Imaret Mosque is the creation of the influential Ottoman architect Mimar Sinan. Until the end of the 19th Century, the mosque stood outside the city boundaries and after 1878 was turned into a prison. In 1901-1903, the mosque was remodelled into one of Sofia's most beautiful churches, Sveti Sedmochislenitsi. 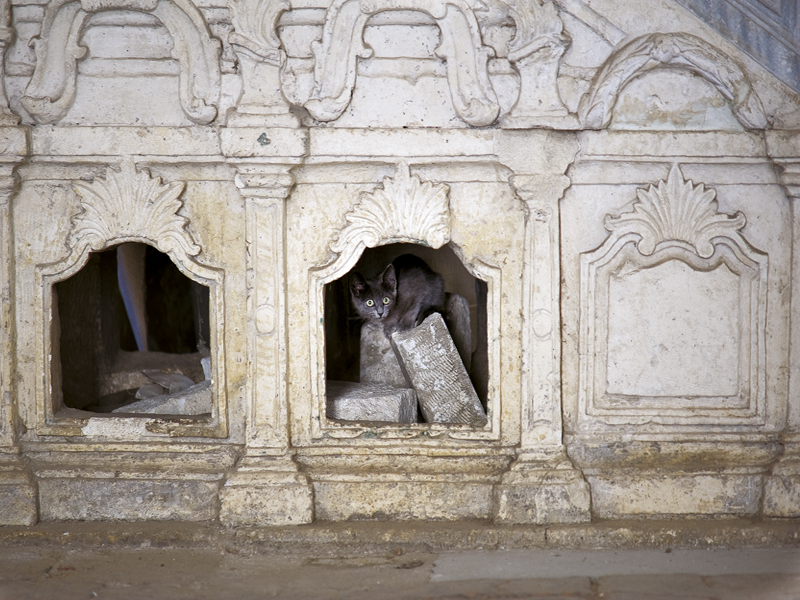 The 17th Century Kurşunlu Mosque in Silistra is now abandoned

Plovdiv, Bulgaria's second largest city, has preserved two fascinating old mosques. The 15th Century Dzhuma Mosque is a monument of national importance and stands by the remains of the ancient Roman stadium. Down the road is the Imaret Mosque, also from the 15th Century. Its minaret with a zigzag pattern laid in brick is truly amazing.

To see Bulgaria's largest and possibly most beautiful mosque, you have to go to Shumen. The central dome of Tombul Mosque is 25 metres high and the minaret rises to 40 metres. This building is also the only example in Bulgaria of the coquettish, decorative, Baroque-influenced style of the Tulip Period in Ottoman art. 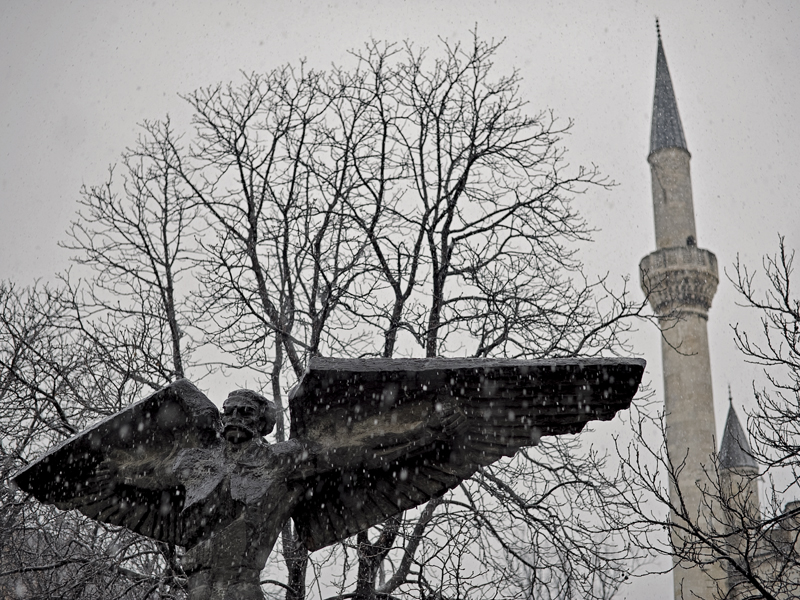 Ibrahim Pasha Mosque in Razgrad is one of Bulgaria's finest, but has been abandoned for decades

What is probably Bulgaria's most unusual mosque is in the Rhodope village of Podkova. The tiny mosque is built entirely of wood, without a single iron nail in it. The origins and the history of the mosque are lost in time but, according to legend, it was built by seven maidens whose fiancés were killed in battle. The girls vowed to remain unmarried, spent their dowries on wooden beams and built the mosque in a single night. 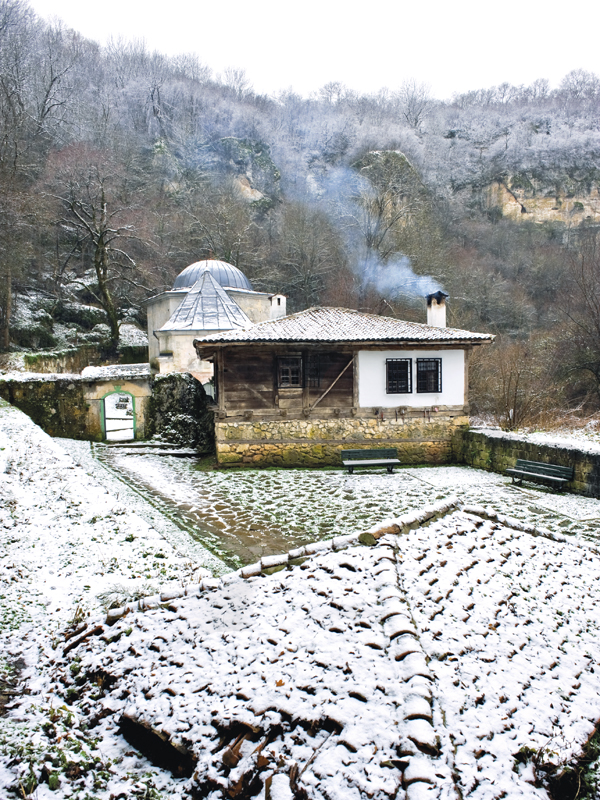 Demir Baba tekke, near Isperih, is the supposed grave of a 16th Century sage renowned for his physical power and ability to cure all illnesses

Here and there around Bulgaria there are remains of Muslim sanctuaries, known as tekke, or shrine, and türbe, or tomb. Most of these belong to the Alevis, followers of a branch of Islam that includes elements of certain different religions.

The most famous is the tekke of Demir Baba, or the Iron Father, near Isperih. Built in the 16th Century, this sanctuary is a part of the Sboryanovo archaeological reserve, which also has the remains of an ancient Thracian city and the caryatid-adorned Sveshtari Thracian tomb, included in the UNESCO World Heritage List. Demir Baba tekke is at its busiest on 6 May, when Muslims celebrate the spring festival Hıdırellez and Bulgarian Christians mark St George's Day. The shrine is rich with Alevi symbolism. The stone tomb has seven corners, mysterious painted decorations cover its walls, and some enigmatic reliefs are to be found on the wall around the sanctuary. Demir Baba is venerated as a healer and evidence of his powers is everywhere. Colourful rags torn from the clothes of the sick are tied to the branches of nearby trees, in the belief that the illness will be tied to the tree as well. 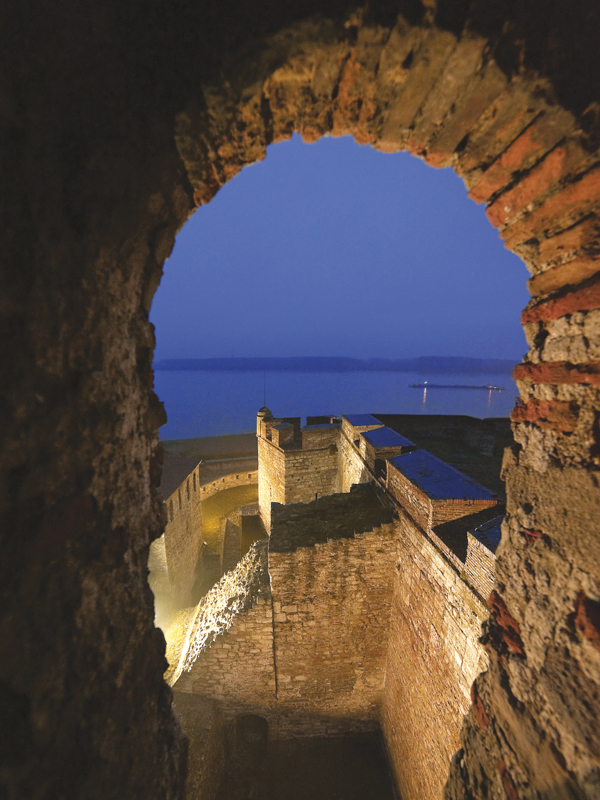 Besides mosques and shrines, there is a host of other examples of Ottoman heritage scattered throughout Bulgaria.
Fortresses are probably the most spectacular. In the early centuries of Ottoman rule, while the empire was still expanding, erecting new fortifications in the Bulgarian lands was not a priority because they would soon be far from the borders. However, when the Ottoman conquest stopped at Vienna in 1683 and the empire started to contract, the erection of forts became of vital importance. The sultans responded by hiring European military engineers and architects to construct forts using the latest designs and techniques. When Bulgaria gained independence in 1878, some of these were destroyed, but a few were preserved, mostly along the Danube.

The most picturesque of the surviving Ottoman fortresses is at Belogradchik. Its citadel is protected by strong walls overlooked by some of the most remarkable formations of the natural phenomenon, the Belogradchik Rocks. In nearby Vidin, the most recent layout of the Baba Vida fortress dates from Ottoman times. The fortress above Silistra designed by German military engineer Helmuth von Moltke was finished in time for the Crimean War and still housed an active regiment at the beginning of the 20th Century. 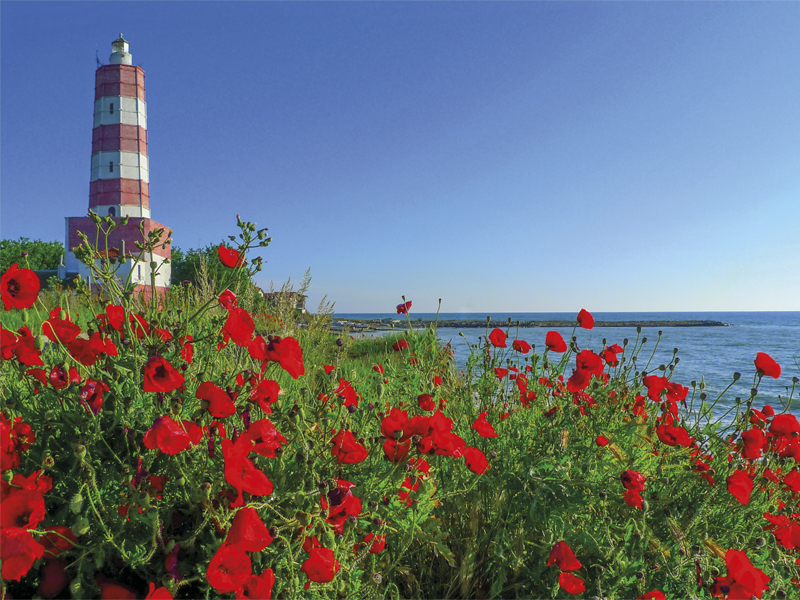 From the end of the 16th Century, city life in the European parts of the Ottoman Empire was regulated by the chimes of an increasing number of clocktowers. The earliest one was in Plovdiv, built atop the appropriately named Sahat Tepe, or Clock Hill.
By the end of the 19th Century there was not a town of importance in the Bulgarian lands without a clocktower. Many of these buildings were lost in subsequent decades, but an incomplete list of the most interesting ones should include the clocktowers in Razgrad (1864), Berkovitsa (1762), Etropole (1710), Dobrich (17th Century), Svishtov (1765) and Sevlievo (1777).

Water is very important to Muslims and, though public baths were known in the Balkans from the time of the Romans, their heyday was in Ottoman times. Cities and towns were dotted with large and small hamams, or public baths, and hot mineral springs added healing properties to the pleasure of bathing. Like clocktowers, baths were built and happily used by Christians too. 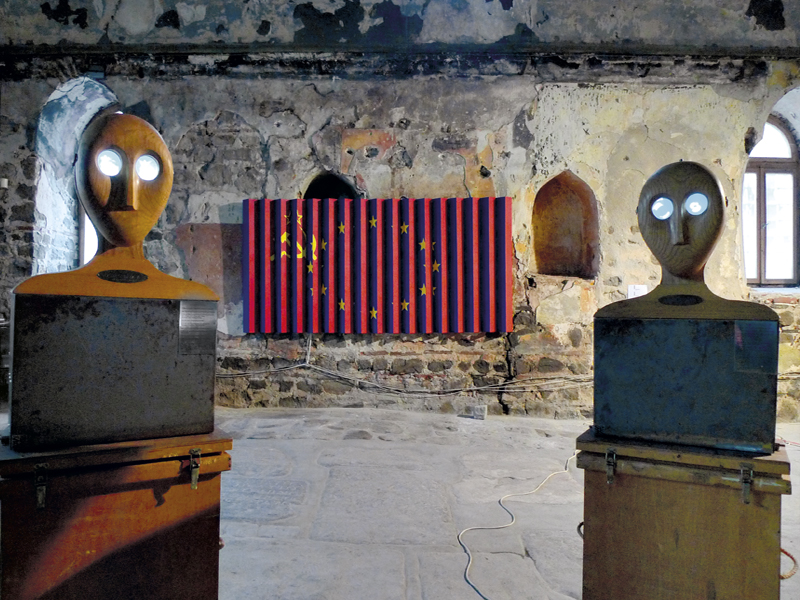 Many of these baths were still in use well into the 20th Century, but today most of the surviving hamams are abandoned, including the ones in Kalofer, Berkovitsa, Gotse Delchev and Banya, near Razlog. Some were luckier and were turned into galleries or even restaurants. In Plovdiv, Chifte Banya, or Double Bath, now houses a contemporary art gallery, and in Kavarna the old hamam has become a maritime museum.

In Ottoman times, public water fountains were usually a gift from a local benefactor to the community. The most common type of water fountains were ornate slabs built into walls, but larger, freestanding, roofed examples with several outlets after the imperial fashion in Constantinople were also erected. Perhaps the most beautiful of these is the freestanding water fountain, dating from 1666, in the centre of Samokov, a now sleepy town which in the Middle Ages and the Ottoman period was a busy mining centre. 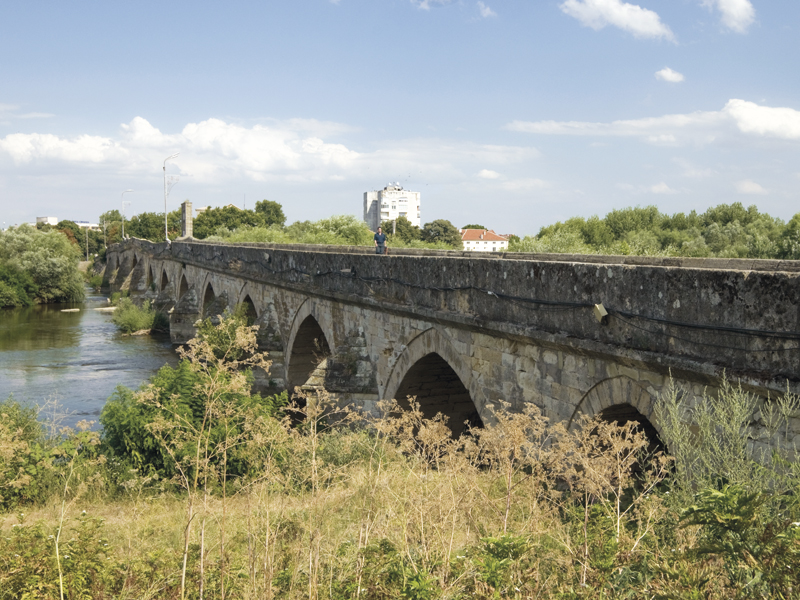 The Ottomans were dedicated builders of stone bridges and started construction in the 15th Century, as soon as they felt secure in their newly-conquered lands.

The longest Ottoman bridge in Bulgaria is the Mustafa Pasha Bridge, built in 1529, at a major crossing on the Maritsa River, now the town of Svilengrad. It is 295 metres long and has 21 arches, the widest of which has a span of 18 metres. The bridge is still in use by local traffic.

The 15th Century Kadin Bridge over the Struma and the 16th Century Devil's Bridge on the Arda are considered the most beautiful in Bulgaria, but the country abounds with equally charming, lesser known bridges. Hidden in ravines and over dry river beds, they are to be found mainly in the mountains. Some of them enjoy local fame, others are overgrown. Do not be surprised when locals or even tourist signs refer to these bridges as "Roman." It is still a received notion among people in the Balkans that a structure so old that its true history has been forgotten simply must be Roman. In Greece, however, anything old is Byzantine. 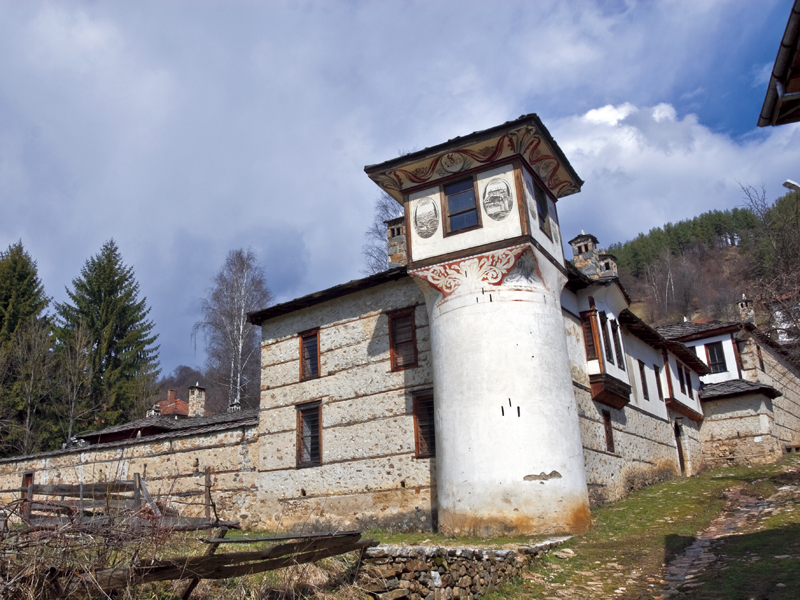 One of the biggest surprises of the Ottoman architectural heritage in Bulgaria are its houses. The majestic buildings in Plovdiv's Old Quarter, Kovachevitsa and Zheravna all belong to a tradition of Ottoman housebuilding which was popular with all religious and ethnic groups in the empire. This impressive style of architecture developed in the Balkans and Asia Minor in the European and Anatolian parts of the empire in the 18-19th centuries, and was spread throughout the empire by itinerant builders of all faiths and nationalities. Similar houses exist in places as far away from each other as Mostar in Bosnia and Herzegovina, Kastoria in Greece and Safranbolu in Anatolia. 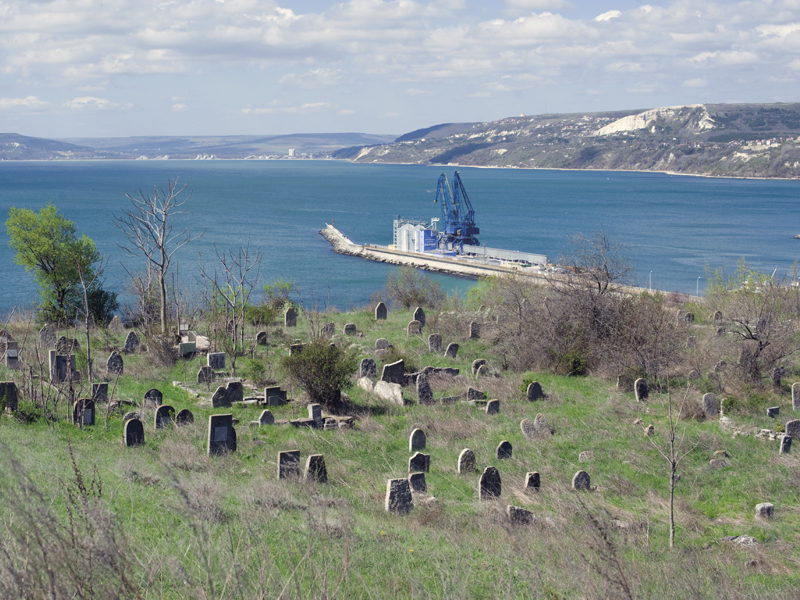 The Ottoman cemetery at Balchik 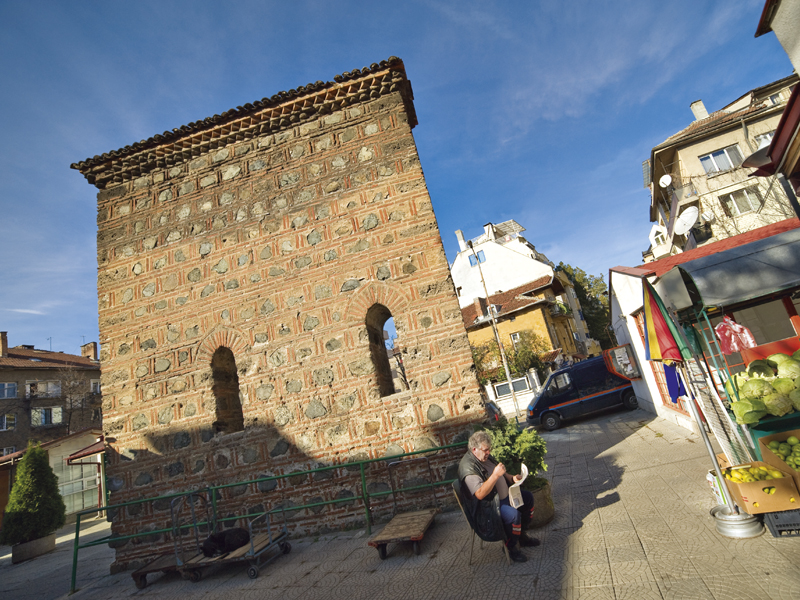 In Bulgaria, there is only one completely preserved mansion of an Ottoman dignitary, the Agushev Konaks in the village of Mogilitsa, in the Rhodope. Built by local notable Agush Aga between 1825 and 1842, this compound of three buildings has a total of 221 windows, 86 doors and 24 chimneys, plus a tower decorated with cityscapes.

Some of the Ottoman remains in Bulgaria are sheer curiosities. One is the so-called Roman Wall in Sofia. Remember the Everything-Old-Is-Roman rule? There is no better example than this freestanding wall in the middle of an open air market. Though everyone in Sofia knows it as the Roman Wall, it has the distinctive appearance of early Ottoman architecture, as it is built of rectangular stones encased in narrow bricks. This "Roman" wall was probably built at the beginning of the 15th Century as an open air place of prayer.