IF BULGAR KHANS WERE SCI-FI CHARACTERS...

Japanese tourists just love the Founders of Bulgaria monument in Shumen, the woman in the ticket office says. The Japanese, the lady continues, are smitten. They stare and stare, and only when they get over their initial shock, do they take out their cameras. The lady at the city council-run ticket office was equally bewildered by the reaction of the Japanese until one day a guide explained.

For a Japanese, the 21 figures of the Founders of Bulgaria monument are like the real-life embodiment of the sci-fi super robots from anime classics such as Voltron and Beast King GoLion, or the Transformers. What a surprise to go to Bulgaria, of all places, and find all your favourite characters sculpted in stone and concrete! 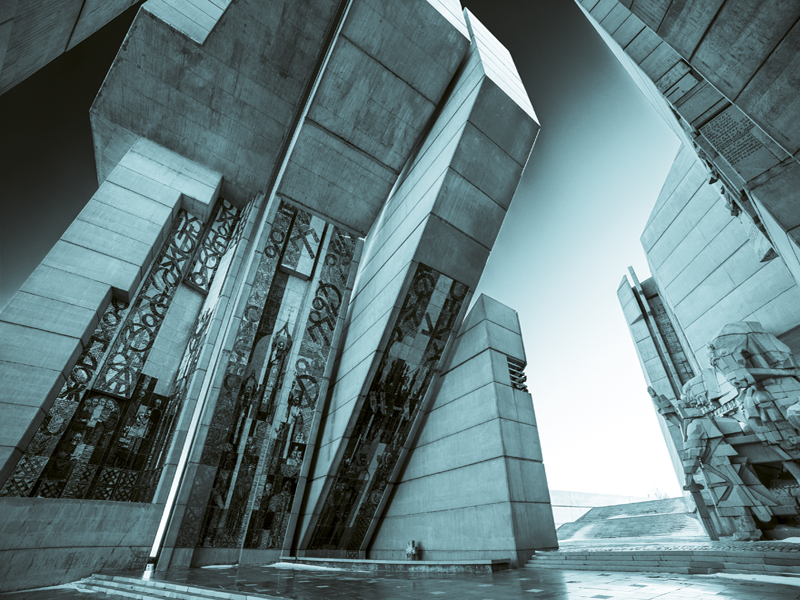 After passing by the early rulers of Bulgaria, the visitor ends in front of a huge mosaic dedicated to Christianisation and development of the Bulgarian alphabet

The creators of this monument were completely unaware of the effect they would produce to the Japanese, however. They were just aiming to create the most imposing monument they could to glorify the foundation of the Bulgarian state. The main target were the Bulgarians themselves. They needed to be impressed beyond belief. Legends had to be created. To do that, the masterbuilders of what is possible the largest concrete monument in Europe subscribed to a peculiar style in the 1970s-1980s, which could roughly be described as Socialist Cubistic Expressionism – with a dash of Futurism. OK, to simplify, let's just call it Communist megalomania.

The idea of building a gigantic monument on top of the Shumen Plateau, at an altitude of about 450 metres, was promoted in 1977. This was the time when Lyudmila Zhivkova, daughter of Communist dictator Todor Zhivkov, was culture minister. A woman led by ambition, patriotism and an interest in Eastern mysticism, Zhivkova set in motion a incredibly comprehensive, incredibly vast and incredibly expensive plan for the celebration of the 1,300 years of the foundation of the Bulgarian state, which had happened in 681. This included, but was not limited to, the organisation of international conferences, lavish celebrations, and erecting bombastic buildings and monuments celebrating Bulgarian history and culture. 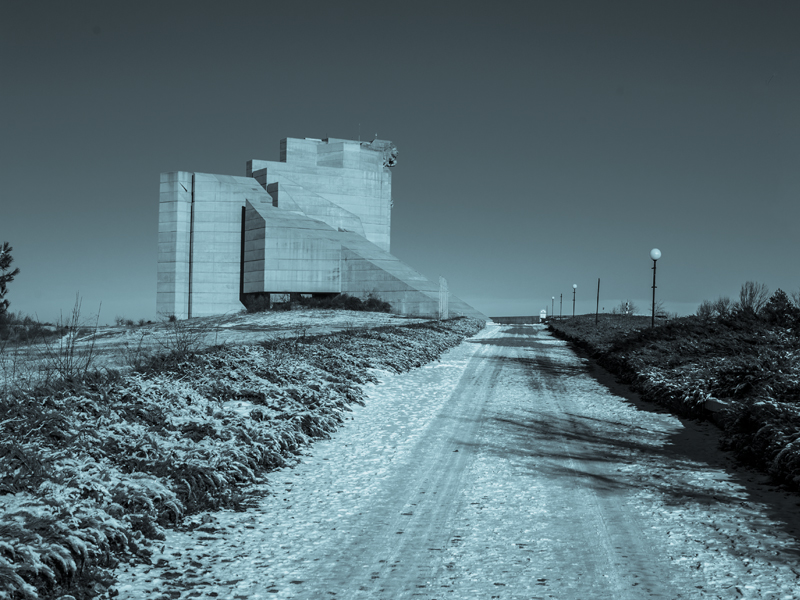 Shumen was chosen as the site for a monument to the founders of the Bulgarian state because it is close to the ruins of Pliska and Preslav, the first capitals of Bulgaria between the 680s and the 970s. Unlike Pliska and Preslav, which are on the plain, Shumen is at the foot of a high plateau, so a monument on top of it would be seen for miles around. The plateau was also the location of a settlement and a fortress dating from the 12th Century BC to the 14th Century AD, another example of the millennia-old history of Bulgaria.

After a tough competition, the project of sculptors Krum Damyanov and Ivan Slavov, architects Georgi Gechev and Blagoy Ivanov, and artists Vladislav Paskalev and Stoyan Velev was selected. Construction began in November 1977 and the finished monument was unveiled on 28 November 1981. Lyudmila Zhivkova did not live to cherish the moment, as she had died on 21 July the same year. 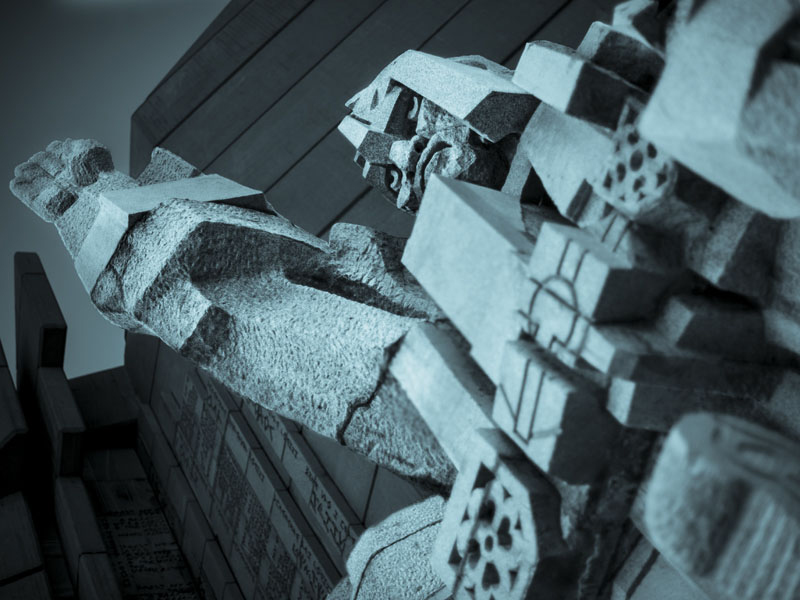 The Founders of Bulgaria monument is just incredible. Angular and made of exposed concrete, it is 140 metres long and 70 metres high. For the construction 2,400 tonnes of reinforced steel bars and 50,000 cubic metres of concrete were used.
For the monument, the architects chose two tall concrete structures with zigzag outlines, symbolising the upward spiral of Bulgarian national evolution. The narrow passage between them is inhabited by huge granite sculptures of early Bulgarian rulers and their retinue, a striking gallery of grey angular faces on top of over-proportioned bodies.

First in the line is, of course, Khan Asparuh. Hailed as the founder of Bulgaria, he brought the Bulgarians south of the Danube, made alliances with the Slavic tribes who were living there, won a decisive battle against the Byzantines and signed a peace treaty which legitimised his state as an international political entity. In the Shumen monument, however, Khan Asparuh looks more menacing than stately, with his deep eyes and huge Transformers-like arm pointing at the sky. The horse behind him, which looks like it exists in at least six dimensions, adds to the sci-fi atmosphere. 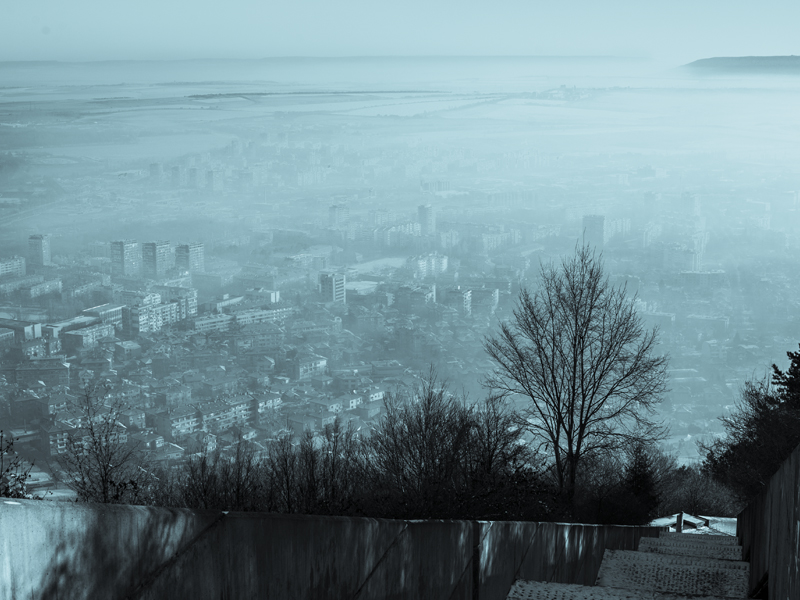 The monument overlooks Shumen and its surroundings, the core of early Medieval Bulgaria

Further along the concrete corridor, perched at a height of 18 metres, are Asparuh's descendants, the khans Tervel and Krum. They look as menacing and grim as their predecessor, and things do not change much when you finally reach Prince Boris and his son, King Simeon the Great. It was Prince Boris who compelled the Bulgarians to adopt Christianity, while King Simeon extended the Bulgarian borders far and wide, encouraging culture to such an extent that his reign was dubbed The Golden Age of Bulgaria. The years of their rule were also the time when the Slavic alphabet was adopted and developed in Bulgaria.

Christianity, military power and the alphabet are the main themes in this part of the monument. When you look up, the concrete walls form a cross against the sky. A huge mosaic in black, white, red, gold and blue is dedicated to the evolution of the Slavic alphabet, its creators Cyril and Methodius, and their disciples. This is the largest mosaic triptych in Europe, a task which took 12 artists to complete. 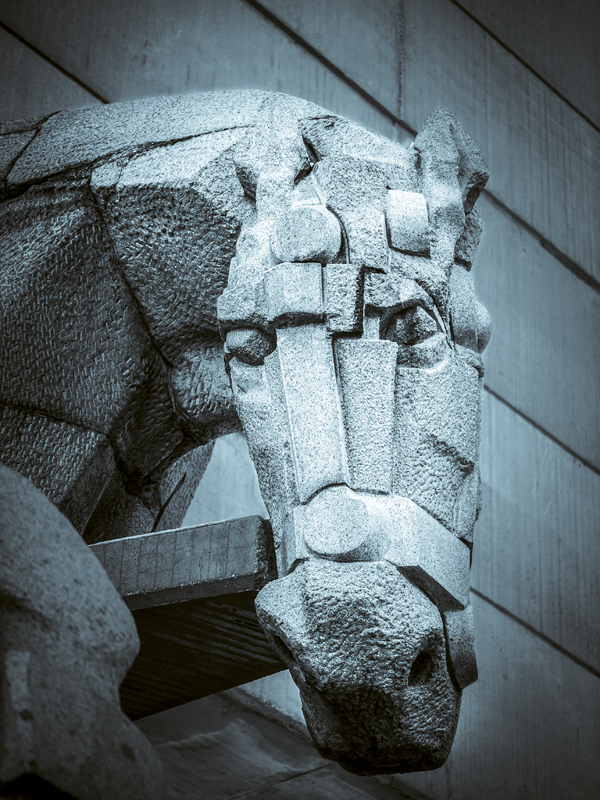 Khan Asparuh's horse. A few years ago one of its legs fell down

To get a good look at the monument's next imposing detail, you have to leave its concrete bowels and take several – the more, the better – steps away. Look up. A 1,000 tonnes lion made of 2,000 pieces of granite adorns the highest part of the monument. According to local lore, the lion commanding an imposing vista over Shumen – and indeed a large chunk of northeastern Bulgaria, is hollow, and has an elevator inside one of the supporting columns. Todor Zhivkov treated visiting Soviet leader Leonid Brezhnev to coffee in the lion's mouth...

Todor Zhivkov attended the opening of the monument, an event seen as the peak of the celebrations of the 1,300th anniversary of the founding of Bulgaria. Many of the Communist top brass were in attendance, and the series of ribbon-cutting events included the opening of a brand new aluminium factory in Shumen, and the new history museum in Preslav. 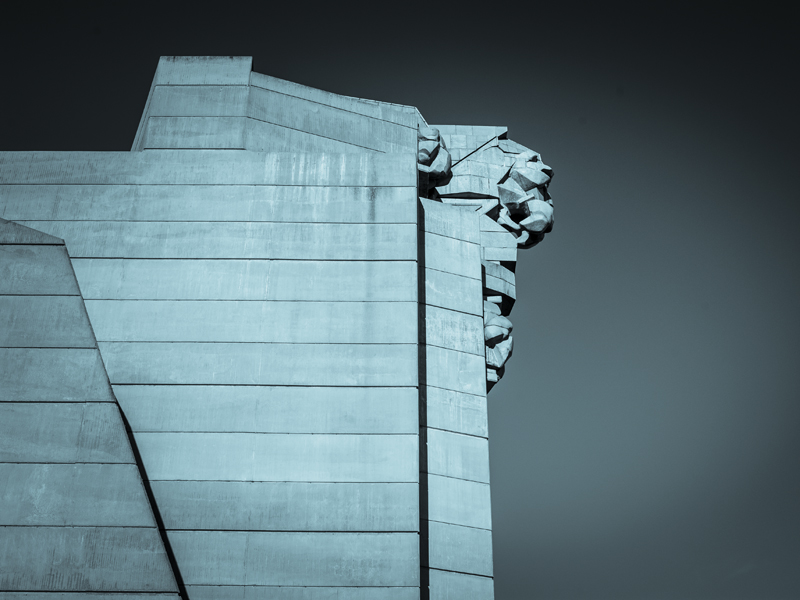 A massive lion adorns the top of the monument. According to urban legend, it is hollow

Even at the time, many people in Shumen were far from happy with the Founders of Bulgaria monument. Today some citizens complain that this showpiece of past glory was built at the expense of ordinary people, who were suffering severe shortages of anything from tomatoes and toilet paper to housing. Estimates of how many blocks of flats might have been built with the reinforced concrete used for the monument vary from five to 12.

Others, however, are proud of the thing, which is on the list of the 100 National Tourist Sites of the Bulgarian Tourist Union, and the mosaics and the grey figures of the early Bulgarian rulers are a popular spot for wedding pictures. The tourist office has responded to the demand by offering wedding ceremonies inside or around the monument. 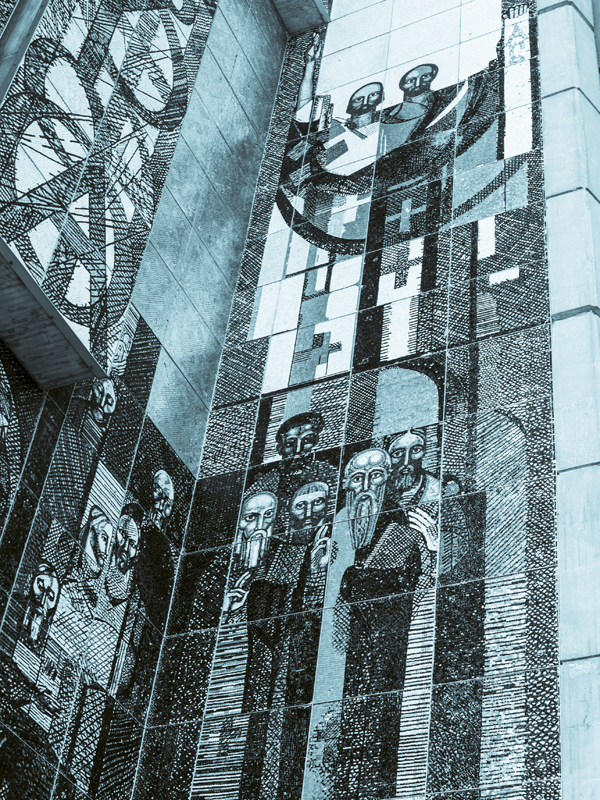 The mosaic triptych is the biggest in Europe, and was made by 12 artists. One of them decided to mark the news of the birth of his son in an unusual way: he placed a blue pebble, instead of a black one, in the beard of St Cyril, the author of the first Slavonic alphabet

After the collapse of Communism in 1989, and in the following decades of economic difficulties, there was no money for the maintenance of the monument. The elements took over and in 2006, one of the legs of Khan Asparuh's horse collapsed. It was replaced with a replica made of artificial stone, but maintenance remains a problem. If she notices you, the lady at the ticket office will charge you a few leva for an entry ticket.

There are two ways to reach the Founders of Bulgaria monument. You can climb all the 1,300 steps of the grandiose staircase which starts with four griffons and a water cascade at the theatre in Shumen. The other option is to go by car; the monument is about six kilometres from Shumen. 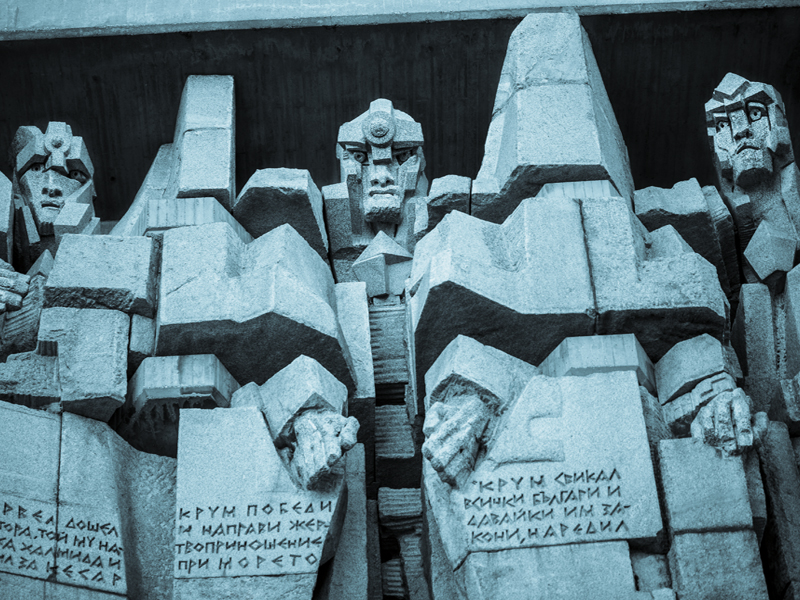 Khans Tervel and Krum, with quotes from Byzantine chronicles about their deeds