Bulgaria has yet to produce an architectural site capable of generating a high-degree wow-factor, with the likely exception of Sofia's NDK, Shumen's Founders of the Bulgarian State monument and the urbanisation solutions seen at Sunny Beach. Yet, the country does have a strong contender for world fame in a new, but growing field of interest: abandoned, ghoulish, straight-out-of-a-dystopian-movie-set constructions visited by folks interested in off-off-off-the-beaten-track tourism and captivated by anything from extraterrestrials to Goths, Communists and urban decay.

Bulgaria's entry in a world's ghostliest derelict sites index looks like a giant concrete flying saucer with a 70-metre pylon, perched on top of a mountain. For those in the know, however, the Buzludzha monument has nothing to do with sci-fi, 1960s James Bond films or East bloc nuclear power engineering. 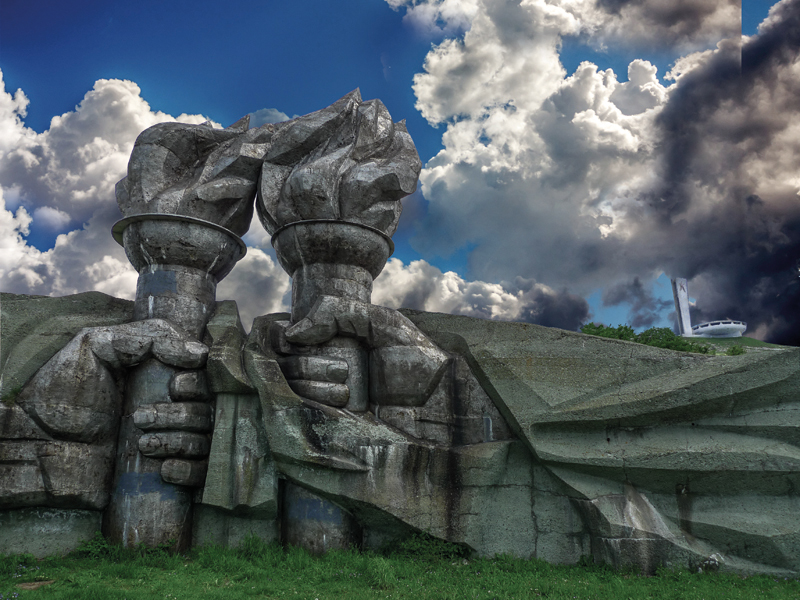 A statue of two icecream cones?

The background for the monstrosity on top of Bulgaria's Stara Planina is political. In 1891, a group of Socialists gathered for their first – and largely clandestine – congress at Mount Buzludzha, and this was how the Bulgarian Socialist Democratic Party came into being. 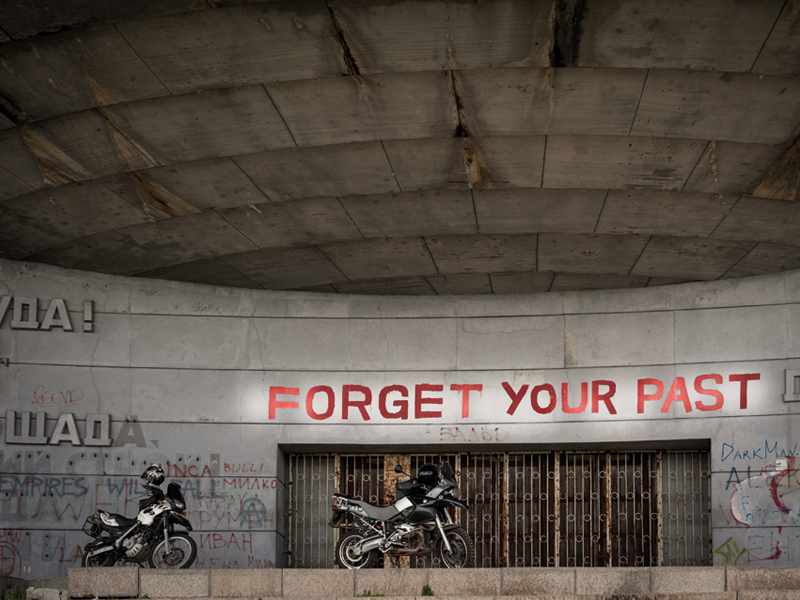 The Buzludzha complex is famous for its ghastly atmosphere

Ninety years later its scion, the BKP, or Bulgarian Communist Party, which had been ruling Bulgaria since 1944, felt confident that it would continue to do so forever. Even the Constitution of the time stipulated that the BKP and the state were an indelible entity.

The Communist Party, having control over the whole country and its population, needed to do something to display its power over the people in perpetuity, and at the end of the 1970s it was decided that a huge conference centre-cum-monument was to be built at Buzludzha. 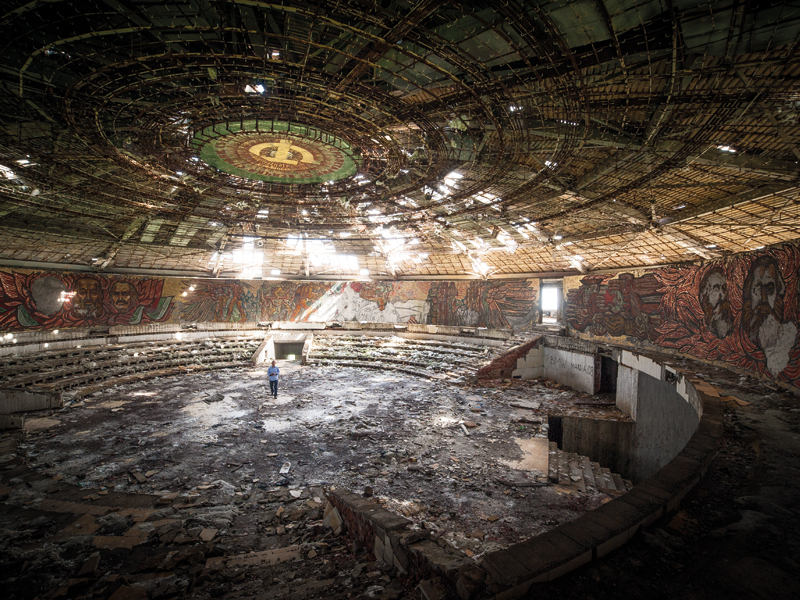 The congress hall, with a diameter of 42 m and a height of 14 m, is now off limits as the complex was closed for safety reasons

The cost spiralled up to over 14 million leva, an enormous amount of cash in those days. Most of the money, however, did not come from the BKP's coffers. Instead, ordinary Bulgarians "voluntarily" donated 50 stotinki from their monthly salaries. The labour was almost free, as young men from the so-called construction corps built the monument. Several of them died in accidents, but you needn't look for a commemorative plaque to them at the monument – there isn't one. The information about the fatalities was withheld, as the party did not want to demoralise. 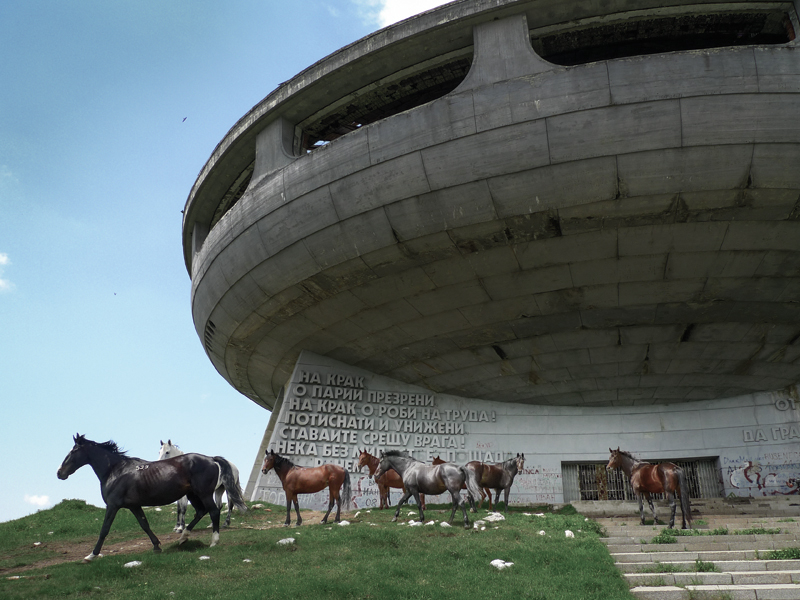 The building, by all accounts, was a show-stopper. Designed by architect Georgi Stoilov, the Buzludzha Monument embodied both absolute authority and Communist luxury, with its sumptuous chandeliers and 2001: A Space Odyssey interior. The walls were decorated with mosaics and two five-pointed stars, both 15 m high and made from artificial "rubies" imported from the USSR, shone from the pylon. The diameter of the conference hall was 42 m and it was more than 14 m high, all covered with 500 sq.m of mosaics, plus more in the corridors. It took over 60 artists more than 18 months to decorate. To put it in a nutshell, the Buzludzha Monument, when it was finished, epitomised both Bulgarian Communism's megalomania and its complete disregard for sensible architectural design. 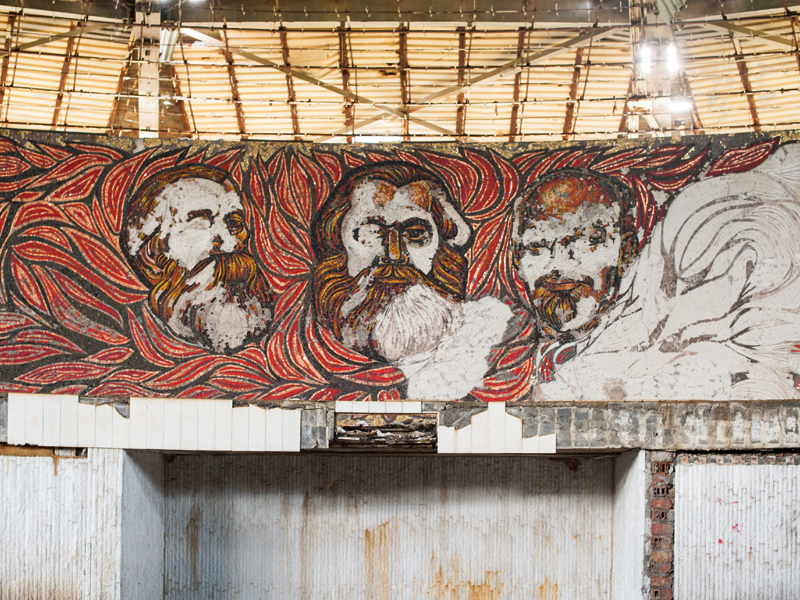 Mosaic portraits of Marx, Engels and Lenin from the conference hall

The conference centre, luckily, did not last long. When the wind of democratic changes swept through the East bloc, the Bulgarian Communists changed as well – at least in name. In 1990 the BKP renamed itself into BSP, or Bulgarian Socialist Party. In 1992 ownership of the monument passed to the state through the Act for Nationalisation of the Bulgarian Communist Party Property. Importantly, it had already ran into seed even when the BSP was in power as no one really cared any more. The BSP restored its property rights to the monument in 2011. 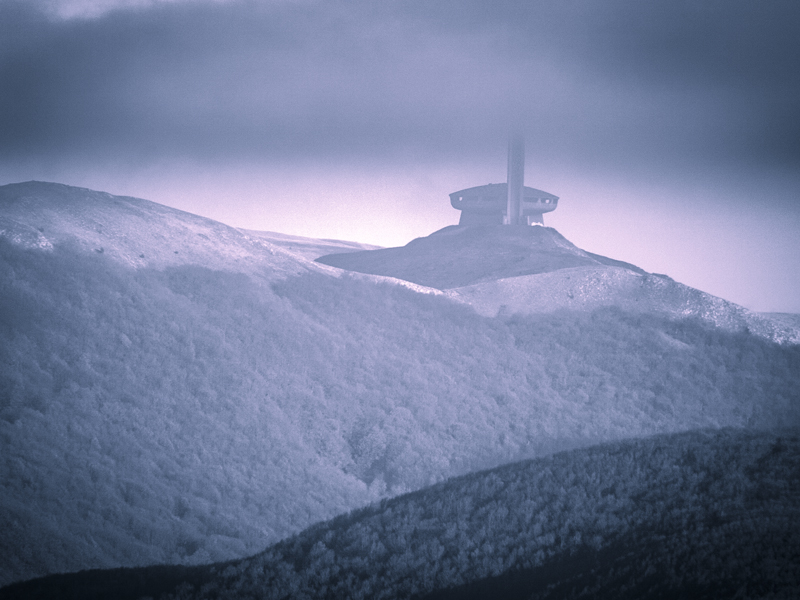 Mount Buzludzha is 1,441 m hight and since 1942 is officially named Hadzhi Dimitar, after the revolutionary who died there in 1868

Today, when you follow the official brown signs to Mount Buzludzha, you will see only traces of the Flying Saucer's former opulence. The building is as impressive in its dimensions as it has always been, but it is literally falling to pieces. The stars are a wreck: they were shot at to remove the rubies, only to reveal that those "precious stones" were worthless coloured beads. The windows have been smashed and all their aluminium frames taken away and sold for scrap years ago. The doors are blocked up, after too many people entered the dangerous building to experience the decadent interior of the huge conference hall and the remains of the shattered mosaics portraying Marx, Engels, Lenin, Georgi Dimitrov and a plethora of grim-faced Communist factory workers and their bosomy wives in the fields. 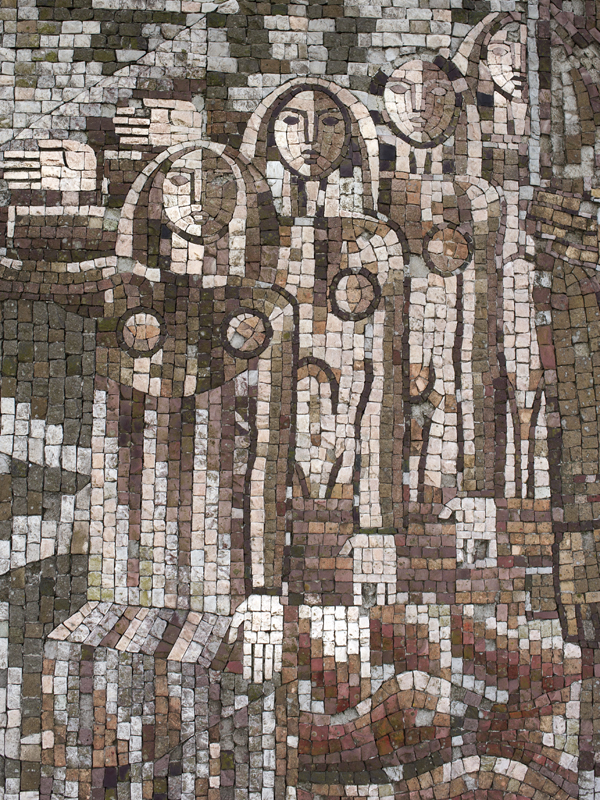 Some of the mosaic decorations are still untouched by time...

Yet, dereliction does not stop the BSP leaders from gathering thousands of their supporters every year at the so-called Historical Meadow at the beginning of August, when they mark the anniversary of the foundation of their party with bold speeches, music and the smell of kebapcheta. Red stars, flags and Soviet-era memorabilia are de rigueur. 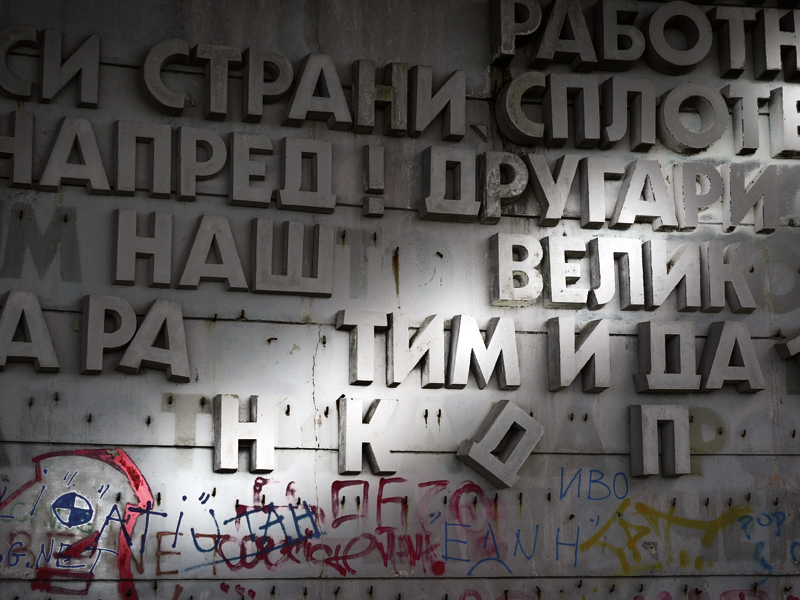 ...While propaganda slogans are falling apart

On other days, however, the Buzludzha Flying Saucer is a waypoint for alternative visitors ranging from captivated photographers to Austrian bikers and British mobile home drivers. In fact, as Buzludzha is gathering popularity as one of Europe's oddest sites the influx of visitors can become quite overwhelming, prompting local guards to tighten the no-entry ban.

If you visit, be warned. The building is dangerous and may collapse over your head if you enter. Stay at a safe distance and try to perceive it as a symbol of a system that ruled Bulgaria for 45 years and never really went away after that.

Read 21873 times Last modified on Wednesday, 29 June 2016 11:51
Published in High Beam
More in this category: « BULGARIA FROM THE WINDOW OF A TRAIN ST ANASTASIA ISLAND »