Vanga is described as a "prophetess" on a stamp issued by the Bulgarian Post Office for her centenary, in 2011

"A time will come, a war will rage, a nation will rise against nations. It will move armed in iron and it will defeat many others, but it will lose the war."
Germany and the Second World War

"Your kingdom is growing, you have spread far, but be ready to get in a nutshell. Remember the date 28 August."
King Boris III's death and the outcome of the Second World War for Bulgaria

"I see a green wall, it will stay for a time, but it will eventually be demolished."
The partition of Cyprus.

"Keep the bread for the people! Hunger is coming!"
The 1995 wheat shortages in Bulgaria. Referring to the 1996-1997 economic crisis in Bulgaria, Vanga mused: "Bulgaria will have a war without war! We will go barefoot and in rugs, we will be hungry."

"Yugoslavia will fall to pieces because the Serbs curse God."
The disintegration of Yugoslavia.

"He will come back, but not as a guest. He will not have kingdom here."
The return of exiled King Simeon II to Bulgaria as a prime minister, in 2001.

"Floods will be upon us in late spring, there will be a river full of corpses."
Specifically made for 2014. Deadly floods did occur in Varna and Dobrich in June. 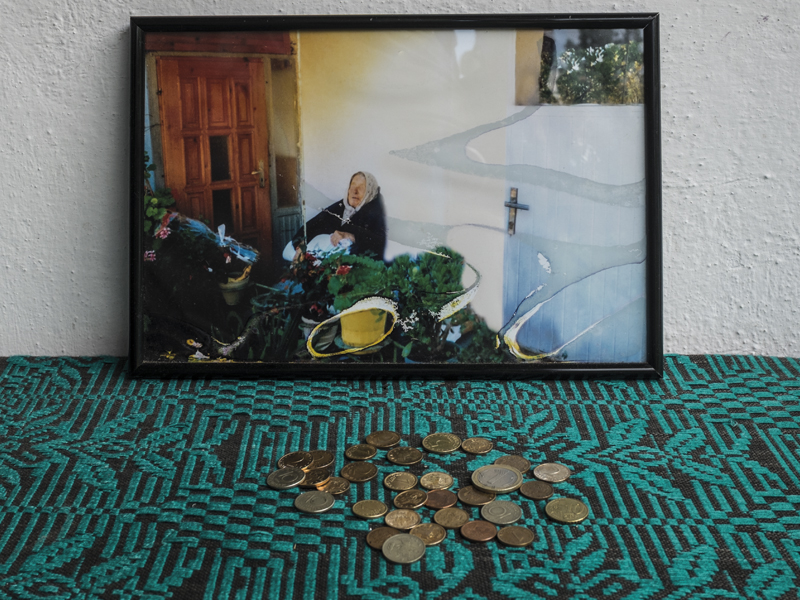 People left coins for "good luck" in front of a photograph of Vanga, in Rupite. In her lifetime, people were supposed to pay to speak with Vanga

"Before 1990, science will make great discoveries in the immaterial field. All hidden gold will resurface, but the water will become scarce."
The iPhone did appear, but in the 2000s. Before 1990 Vanga might have referred to the Mac OS.

"Many cities will be destroyed by earthquakes and floods, cataclysms will shake the world."
Nothing like this happened precisely in 1991.

"The earth will shine with new, good light. It will be settled by new souls and some of them will become visible."
Bulgaria never got that in 1992.

"1996 will be good for Bulgaria."
The country experienced massive street rallies, poverty, hyperinflation and a collapse of the banking system.

"The teachings of the White Brotherhood will emerge from Russia."
In 2000, thankfully, nothing like that happened.

"New information about the Universe and the past will be discovered in the old books."
Dan Brown?

"The city will go to bed and won't wake anymore, and those who wake up, will regret it."
A failure in a chemical factory in the Russian city of Bratsk, for 2007. None happened.

"Remember, we haven't hit rockbottom yet. Bulgaria will start to improve after 2005."
The 2000s were a period of an unprecedented economic upswing for Bulgaria. Things started falling apart with the beginning of the world economic crisis and the advent of GERB, in 2009.

"In May 2014, there will be a shift at the top. A new man, tall, from abroad, will come to Bulgaria and lead it toward a better life. A new disease, worse than AIDS, will hit us, targeting mainly men."
The 25 May EU elections in Bulgaria led to the emergence of Bulgaria Without Censorship. Its leader is tall, but still lives in Bulgaria. Some people in the office have a nasty flu.

"No one can break Russia. Russia will develop, will grow, will become stronger. All will melt, but one thing will remain unchanged, the glory of Vladimir."
Did Vanga mean Prince Vladimir, who brought Christianity to Russia, or did she have in mind the other one?

"Russia is great and will remain great. One day the former Soviet republics will come back to Russia."
With the obvious exception of Ukraine.

"India, China and Russia will get together."
Wait and see.

"Without Russia, there is no future for Bulgaria."
Particularly relevant in 2014.

"One day all will recognise the spiritual superiority of Russia, even America will."
No, thanks