Shopping in the centre of Tryavna, a traditional town in the central Stara Planina, is a peculiar experience. Here and there, in the narrow shops infused with the aroma of 200-year-old wood, you can find the usual souvenirs and touristy stuff you are familiar with from other traditional places in Bulgaria. However, in Tryavna the ubiquitous carved wood items, icons and old aprons mingle with more ordinary goods, as the old Revival Period shops in the city centre also sell groceries and washing powder, books, shoes and toys, and plenty of the locally manufactured underwear. 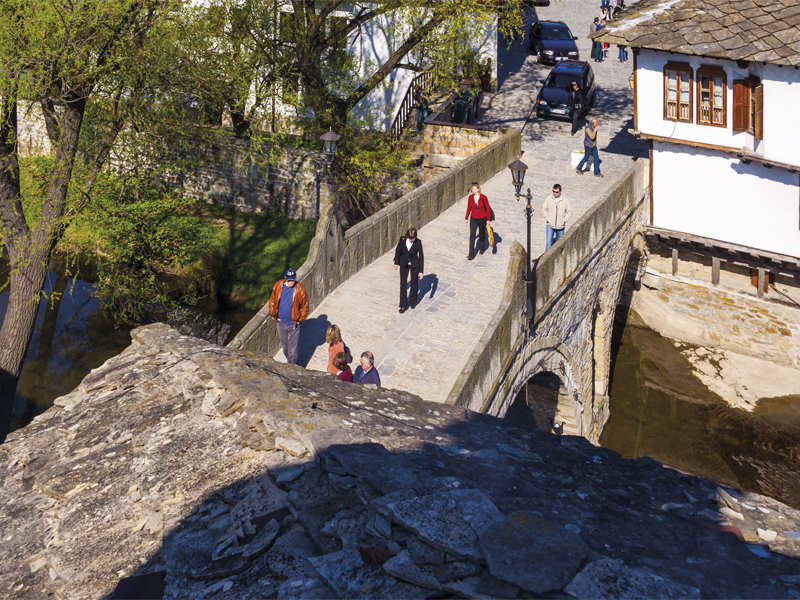 The stone Humpback Bridge, from the 1840s, was built after local people get fed up with the river destroying the old wooden bridge

Unlike other traditional villages and towns in Bulgaria stuck in their omnipresent museum-feel, Tryavna is alive. Ordinary people still live in the fine Revival Period houses and the cobbled streets are busy with townsfolk, hurrying about their business. One of the centre's top locations, in a traditional house between the city Clock Tower and the Revival Period school, which elsewhere would be an expensive restaurant, is still the café of the local pensioners' club, entrance and service only for members.

In a twist of fate, Tryavna is the only Bulgarian city with a completely preserved Revival Period centre, combining all the elements of 18-19th centuries cityscape: homes and shops, a school and a stone bridge, a church and a clock tower. There were many towns like Tryavna, but their faces were forever lost in the whirlwind of "modernisation" – for which read scrapping everything old and replacing it with uniform squares with tile pavements – which swept Bulgaria in the 1970s-1980s. 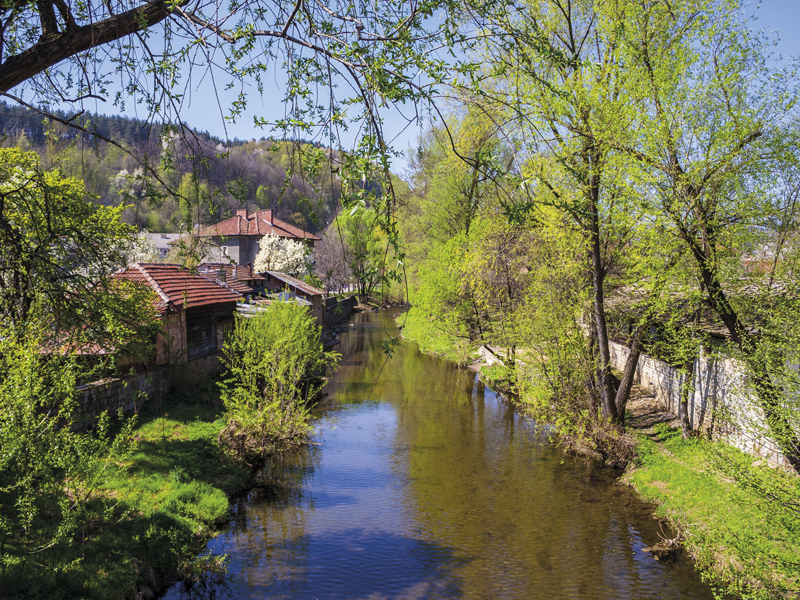 Huddled on the banks of the Trevnenska River, Tryavna appeared in 1565 as a village of derventdzhii – people in the Ottoman Empire whose task was to keep the mountain passes safe for travellers. In the following two centuries, trade and commerce flourished (agriculture scarcely earns a living in the mountains). In the 17th Century, a local icon painting school was formed, and today its disciples are still among the most revered icon-painters in Bulgaria. Woodcarving expanded too, forming another school of talented artisans. 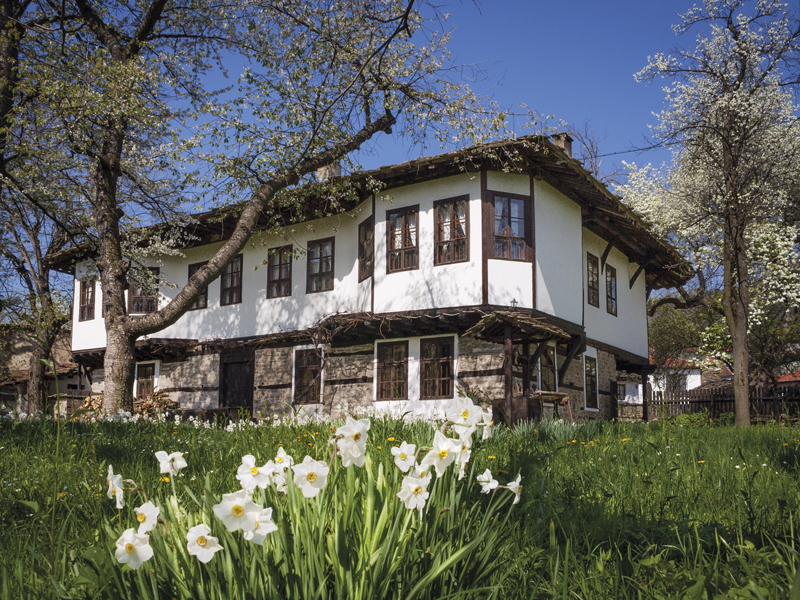 The centre of Tryavna today is a living exhibition to the skills and crafts of local masters. Every detail in the old buildings – from the carved wooden beams supporting projecting windows to the big iron nail heads in the wooden doors – shows the desire of old-time masters to create things of beauty and of endurance.

There are several places in Tryavna where the artistic skills of local craftsmen are at their best. The wooden ceilings of the Daskalova Kashta, or The Daskalov House, from 1804-1808, were carved during a competition between a master woodcarver and his ambitious apprentice. Both men carved suns and it is still hard to decide which one is better – the heavy summer sun made by the seasoned master or the young apprentice's sprightly spring sun.

There is more in the Sveti Archangel Mihail, or St Archangel Michael church, with its heavy, stone slab roof and peculiarly Oriental belfry. Built it the 17th Century, the church is the oldest in Tryavna, but what you see today is a reconstruction from the early 19th Century. Inside, the iconostasis is covered with the intricate woodcarvings of the best Tryavna masters, and the icons are on a par; superb examples of the art of the local icon-painting tradition.

If you want to see more icons, visit the Icon Museum at the so-called Tsarski Paraklis, or King's Chapel, built by Bulgarian Queen Ioanna in 1943-1944. 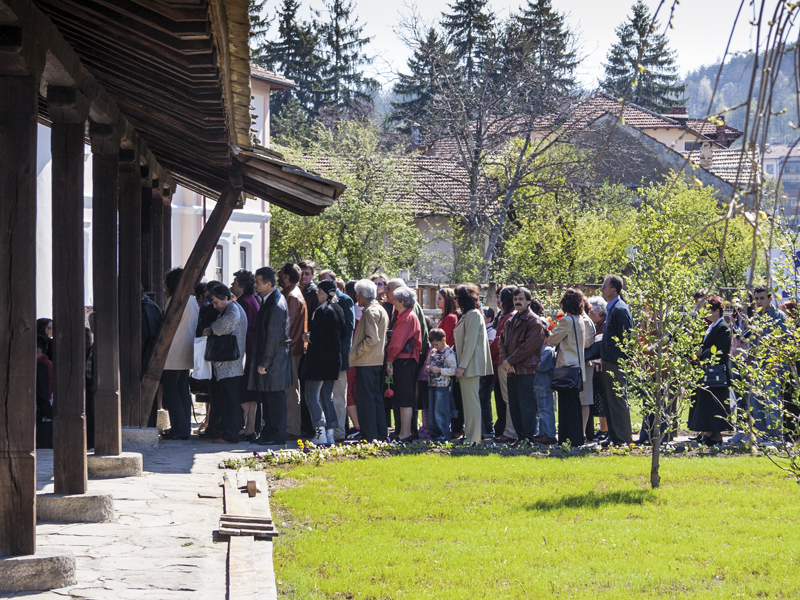 For many, walking Tryavna's cobblestones – not to mention drinking Turkish coffee or trying rakiya in the restaurants – is immersion enough in the old-time atmosphere. For a fuller experience, however, do visit some of the museum houses. Slaveykovata Kashta, or The Slaveykov House (1830), is unchanged from the mid-19th Century, when poet Petko Slaveykov and his family, including the son and future poet Pencho Slaveykov, lived there. The home of revolutionary Angel Kanchev is another fine example of local Revival Period architecture, and the house of the first Bulgarian professor of Chemistry, Penko Raykov, presents a Europeanised Bulgarian lifestyle from the second half of the 19th Century. 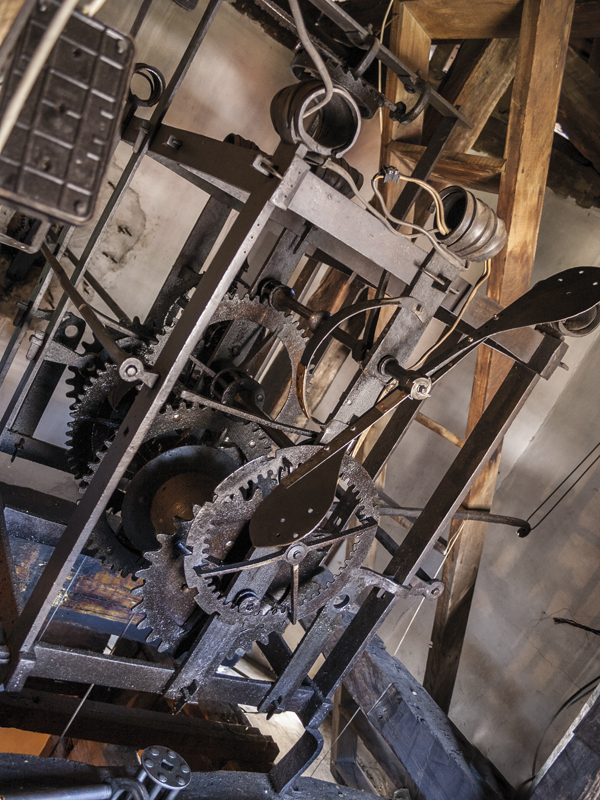 What makes Tryavna even more special is that it is not completely stuck in the Revival Period. In the former city public baths' building there is one of the most peculiar museums in Bulgaria, the Museum of Asian and African Art. Yes, that's correct. Right in the centre of traditional Tryavna there is a space filled with wooden masks and figurines from faraway places, donated by a Tryavna-born New Yorker, artist Zlatko Paunov. Paunov's fellow citizens are as proud of his collection as they are of their charming old city centre.

All Around the Clock Tower

Tryavna's main landmark is the 21-metre Clock Tower in the city centre beside the humpback stone bridge. The tower was built in 1814 and a year later two craftsmen from nearby Gabrovo installed a clockwork mechanism to regulate the working hours of the town's merchants and craftsmen.

The tower soon became the pride of the city. Pencho Slaveykov reported: "The citizens of Tryavna love dearly their city clock, which the people of Gabrovo lack, and believe it to be the highest building in the world. In 1889, I was talking to someone from Tryavna about the Paris World Fair and its jewel, the Eiffel Tower, about its dimensions and grandiosity. But the Tryavna patriot stopped me at the very beginning: 'Is it really higher than our clock-tower?' – and in spite of my assurances that the Eiffel Tower was indeed 20 times higher than the one in Tryavna, he insisted: 'Have you seen it?' And when I said 'No!,' he couldn't fathom how I, a 'learned man,' could have believed the downright lies of Westerners. 'There is nothing higher than our tower!' said he, the Tryavna man in baggy trousers."

Truth be told, there is a connection between the Tryavna clock tower and Paris. In 1996, on the initiative of a local physics teacher, a Foucault pendulum was installed inside the Tryavna tower, just like the one in the Panthéon. 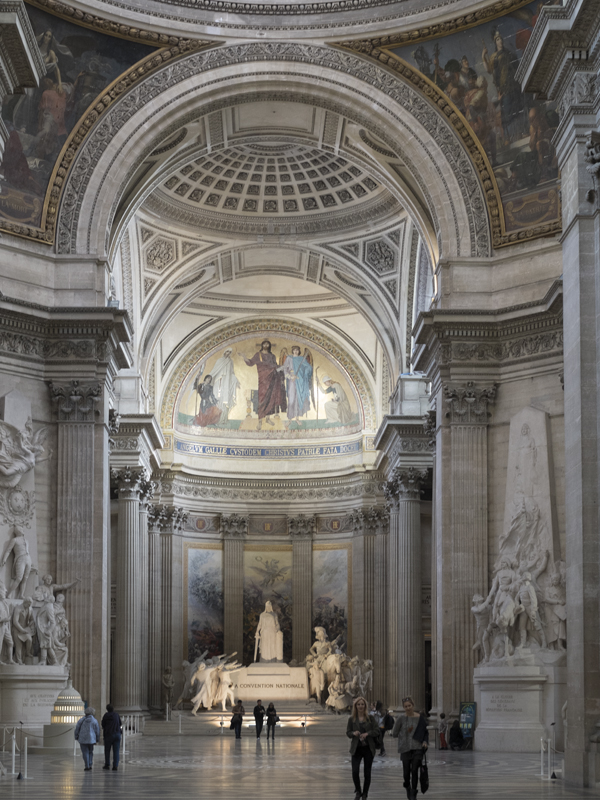 The Panthéon in Paris, home to the original Foucault's Pendulum

The only difference between the two pendulums is that the Parisian one takes six hours to complete its rotation while the Tryavna one swings for only 10 or 15 minutes. Both, however, prove that the Earth does spin.