Situated about 2 km from the nondescript village of Kamen Bryag, Yaylata is a rocky plateau which covers 74 acres and rises to up to 60 metres above the Black Sea. If you are not aware of Yaylata's existence, it is easy to overlook it while travelling in this part of Bulgaria. The eastern edge of the Dobrudzha is flat, as it is the furthest extent of the great Eurasian steppes. From the road, there are no visible traces of Yaylata. The humble ticket office set amid the plain is the only sign that you are approaching one of the most interesting nature and archaeological reserves in Bulgaria. 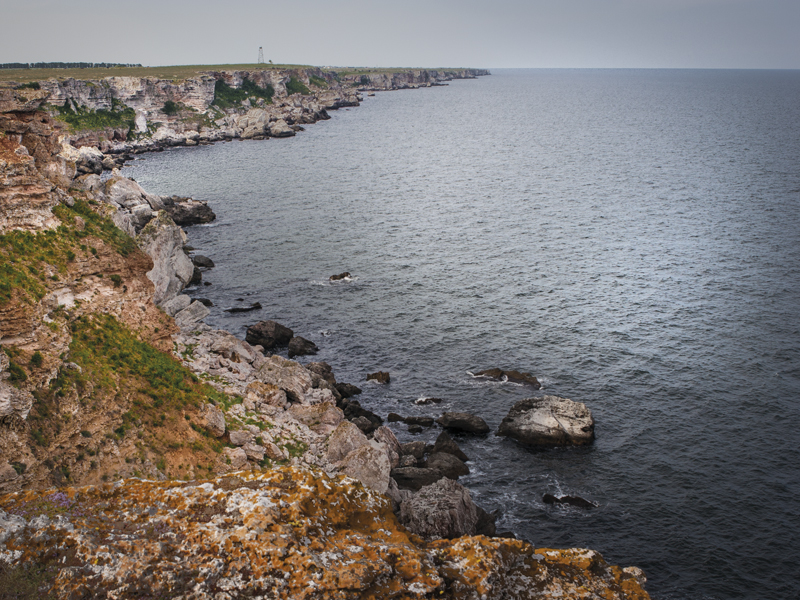 The plateau rises for up to 60 metres above sea level

What you see first on entering the reserve is more steppe, overgrown with tall grasses. To the east, the steppe ends abruptly and the sea fills the horizon.

With every step you take towards the sea, new and more charming details emerge. In late April and early May wild peonies, poppies and cotton thistle are in full bloom, filling the steppe with their vivid colours. In the sky above and among the grasses around fly and forage rare birds like the European Shag, and the Great and Little Bustard. Yaylata is on the Via Pontica, Europe's second busiest bird migratory route, and over 170 migrating bird species use it as a nesting ground.

Then, while you walk on towards the sea and the entrance of the plateau, culture suddenly replaces nature: under your feet, open graves gape. Carved into the white-and-orange rocks of Yaylata, they can be counted by the dozen and once held the remains of Sarmatians, an ancient people living along the north Black Sea between the 5th Century BC and the 4th Century AD. Just like migratory birds, Yaylata also attracted migrating humans.

When you finally reach the end of the terrace, the sea is 60 metres below, washing against the ragged cliffs and carving caves and crevices in them. Bulgarian rock climbers, photographers, movie makers and legend-lovers just adore this scenery. Several (not particularly good) movies have been shot here. According to a popular story, Lysimachus, one of Alexander the Great's generals, hid his treasure in the caves of Yaylata. Some people still look for the gold.

The Fire, a natural gas outlet burning near Yaylata, is a favourite spot for picnics

Until not that long ago, the water-level caves were inhabited by monk seals. In the 1950s-1970s, they were completely wiped out from the Bulgarian Black Sea coast by fishermen, who claimed that the seals were stealing their fish. The last monk seal was seen at Yaylata in 1980. In 1989, the plateau was declared a reserve.

The vast terrace, however, is only the entrance to Yaylata. The actual plateau was formed aeons ago when a severe earthquake tore a chunk of land from the plain.

To discover the beauties of the plateau, you have to follow a path that meanders between high rocks and lush greenery.

More traces of human habitation are scattered around. Here and there in the cliffs are 101 caves which in the 5-6th centuries housed monks from the rock monastery that existed then. Further into the plateau are the strong, white stone walls of a fortress. Built by the Byzantines in the 5-6th centuries, it guarded this important point of the coastline. The fortress, however, did not survive the arrival of the Slavs and proto-Bulgarians into the area. After three centuries of abandonment, a Bulgarian settlement appeared on its ruins, but it, too, was abandoned. Yaylata fell silent, left to the wildlife and the odd fisherman.

Sarmatian graves at the Yaylata

People preferred to live inland, where the wind was not so severe and the soil fertile, and there was no reason to risk your life in the treacherous sea. This tradition is still alive in the area and even today villages are kilometres inland from the sea.

Even the name Yaylata portrays a sense of abandonment and wilderness. It is of Turkic origin and means highland pasture.

Tourists started to venture into Yaylata in the 1970s-1980s, on the hunt for freedom, tranquility and the adrenaline rush of jumping into the sea and swimming in the whirlpools. In the 2000s, as overdevelopment started to destroy the pristine beaches along the Bulgarian Black Sea coast, the popularity of Yaylata grew.

Unwanted "modernisation" is creeping towards Yaylata, too. In 2011-2013, a company started building on the edge of the reserve. After protests, the authorities stopped construction, but the landscape is still compromised by the unfinished concrete monstrosity.

In 2013, Kavarna municipality advertised its EU-funded project for a total reconstruction of the ancient fortress walls "in their entirety," in spite of the fact that the law allows only restoration and not actual building in the reserve. According to the initial plans for the Yaylata fortress, the walls will be raised from their present height of 3 metres to up to 6 metres. To add aesthetic insult to archaeological injury, the defence towers will be topped with red tin roofs.

It does not sound especially alluring – so, hurry up and visit Yaylata in its still undisturbed wild beauty.

According to a local legend, evil avoids places where wild peony grows