Explore the art, ruins of a disappeared culture

For many, Thracian culture's most alluring side are the gold treasures. They are the star exhibits in the national museums and travel the world to enthusiastic reception. Every pair of gold earrings found in Thracian graves make headlines.
The culture of the Thracians was far richer, however. In the 2nd Millennia BC the Thracians, a strange people who inhabited what is now Bulgaria and who had no written language, built megalithic shrines and tombs. In the 4-3th centuries BC their independent states went through a golden age of prosperity, when kings minted their own coins, built spacious towns and residences, and fought with the successors of Alexander of Macedon.

Traces of this fascinating past still survive, scattered throughout Bulgaria.

Discovered in the 1970s, in the then strictly-guarded border zone with Turkey, the tomb at Mishkova Niva is a fine example of Thracian stone architecture and continuity of burial rites through the centuries. It began with a dolmen. Later, in the 6-4th centuries, a white marble tomb was built next to it, and both were covered with earth. A slab-covered road led to the mound and the nearby necropolis, which led historians to suggest that the tomb at Mishkova Niva was a place of continual homage to the memory of a deified local nobleman. The tomb's entrance was decorated with a pediment adorned with a pair of open-fingered palms, but you won't find it in situ. It is now in the lapidarium of Malko Tarnovo's history museum (Malko Tarnovo, 1A Konstantin Petkanov St). The museum is also the place to arrange a guided visit to Mishkova Niva. 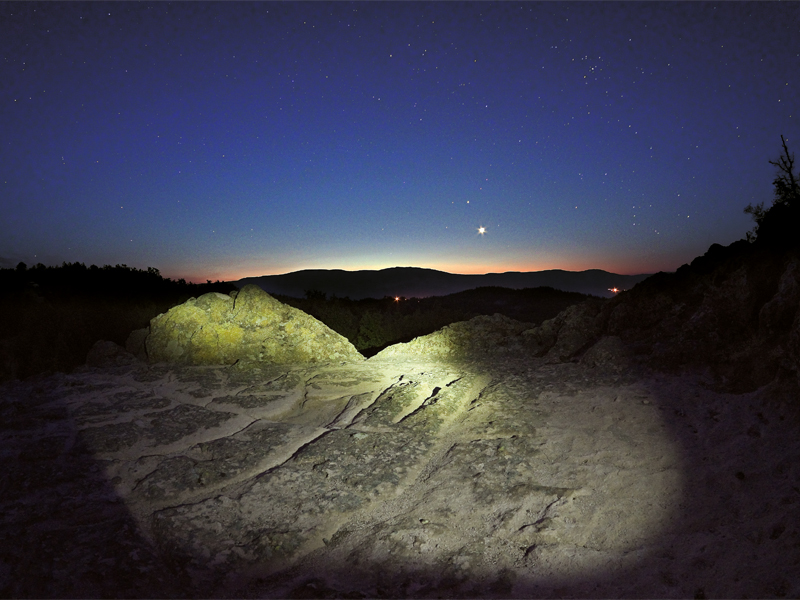 According to its first explorer, archaeologist Vasil Mikov, the rocky plateau near the Rhodope village of Bivolyane in the Momchilgrad region, was a Thracian city with a sanctuary, roads and houses. For the unprepared traveller, the Harman Kaya sanctuary is a mosaic of strangely-shaped rocks, a small cave, and round altars hewn into the rock – often at precipitous heights.

The most peculiar feature of the sanctuary are two round sites covered with what appears to be earth canals and circles. No one knows what exactly they were, but the hypothesis that they were used to measure time is quite popular. The circular sites have impressed even the locals, who consider them to be the thrashing floor of fairies: Harman Kaya in Turkish means the Rock of the Thrashing Floor.

Harman Kaya is at the end of an easy, clearly marked path starting from the road to the shrine of Muslim sage Elmalı Baba, in Bivolyane. 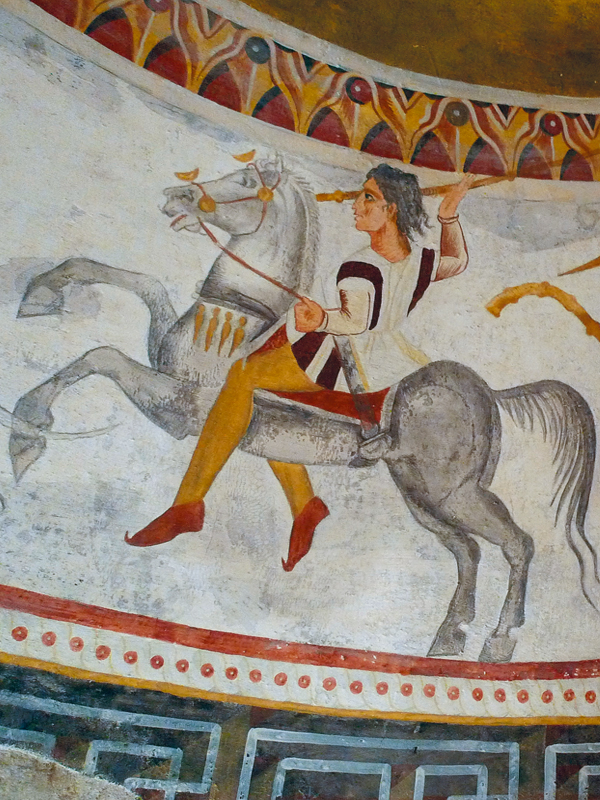 For the Thracians, big game hunting was sacred. An activity reserved for aristocrats, it was a symbol of royal power. Every year whoever was king would go on a sacred boar hunt to demonstrate that he is still strong enough to bear the crown. In the afterlife, Thracians believed, there would also be hunting.

So, hunting became a major theme in Thracian art, and the Aleksandrovo Tomb is one of its finest examples. Discovered in 2000 by Dr Georgi Kitov, its chamber is painted with men – on foot and horseback – chasing deer and boar. The antechamber is also decorated with mysterious depictions of battles or probably dances between riders and naked young men.

The vivid figures of Aleksandrovo Tomb murals are probably the work of a Thracian artist, and the painstakingly depicted details of weapons, harnesses and clothing are an important source not only about the beliefs of the ancient Thracians, but also about their everyday life.

The Aleksandrovo Tomb is closed because of conservation issues, but in 2009 a Japanese government-funded museum centre for Thracian art in the eastern Rhodope opened near it. It contains an exact replica of the original (Aleksandrovo, near Haskovo; open Tuesday to Sunday from 9 am to 5 pm). 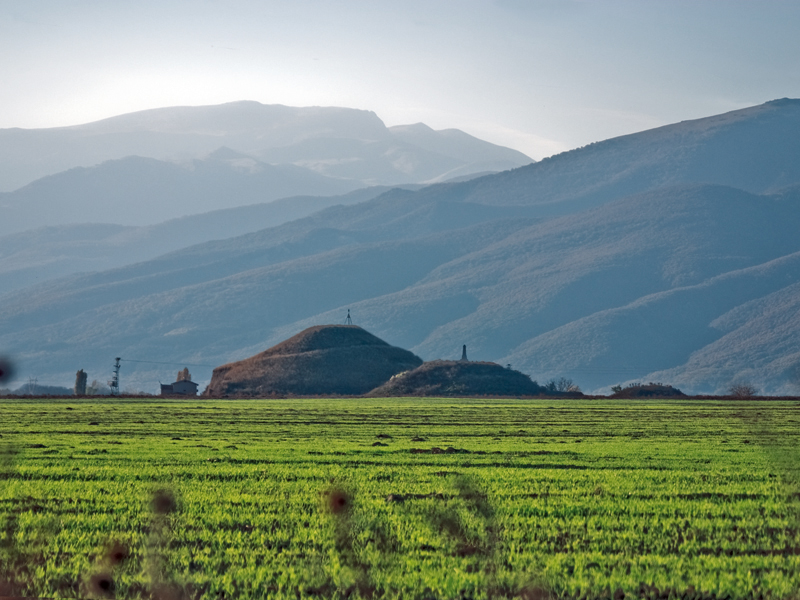 The Kazanlak area is dotted with dozens of Thracian burial mounds, prompting the media to dub it the Valley of Thracian Kings

The Thracian tomb at Kazanlak has captured the public imagination since its accidental discovery in 1944. Many historians have surveyed it ‒ including Lyudmila Zhivkova, the daughter of Communist dictator Todor Zhivkov, and UNESCO added it to its prestigious list of world heritage sites in 1979. Plundered in Antiquity, the tomb still preserves masterfully painted murals of a couple surrounded by their servants. The gentleness with which the man holds the lady's white hand is still touching, 2,400 years after the paint was applied. What the scene represents is still a mystery. Is it a farewell feast between him, the dead, and her, the living? Is it a depiction of the Thracian custom of killing the widow and burying her with her husband? Is it how the Thracians imagined the eternal bliss of the afterlife? Perhaps it is all about the sacred marriage between the deified deceased and the Great Goddess of the underworld.

The tomb at Kazanlak is opened for dignitaries only. Hoi polloi visit the nearby replica (Kazanlak, Tulbeto Park, daily from 9 am to 5.30 pm). 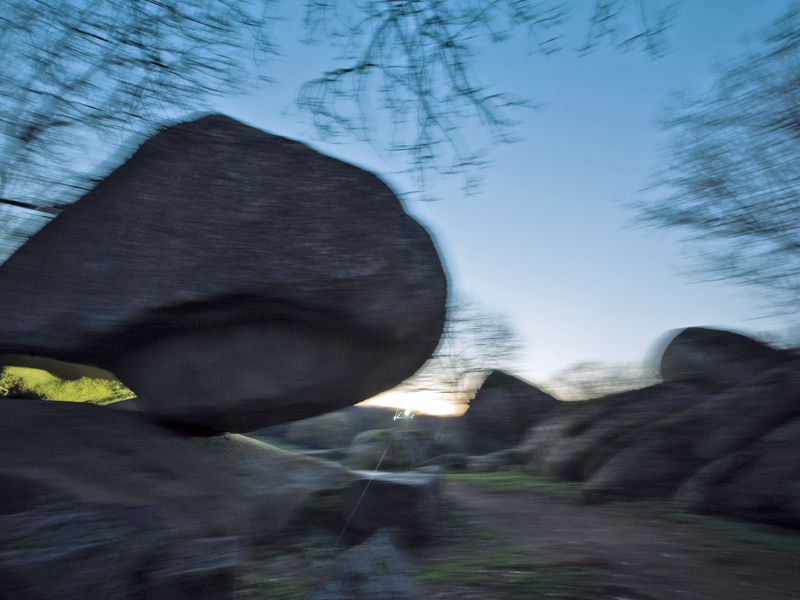 For generations who lived in the area of today's Primorsko, the boulders in a clearing in the dense oak forest of the Strandzha were only a convenient place to gather and pay the sheep tax to the Ottoman authorities, hence they called the place Begliktash, the Stone of the Sheep Tax. For the Communist functionaries, enjoying life in the well-protected Perla Residence, Begliktash was either a hunting ground for deer and boar, or a good source of cobble stones.

The volcanic boulders of Begliktash, however, have a deeper meaning. Between the 14th Century BC and the 5th Century AD they were a Thracian megalithic shrine. Begliktash became popular among history lovers in the 2000s, when access was eased and tourism in the south Bulgarian Black Sea boomed. Several structures have been excavated, including the residence of the priests. Tourists are more attracted to the so-called Sun Clock; the narrow crevice through which it is alleged the sinful cannot pass, and the huge heart-shaped boulder said to touch the ground at only two points. 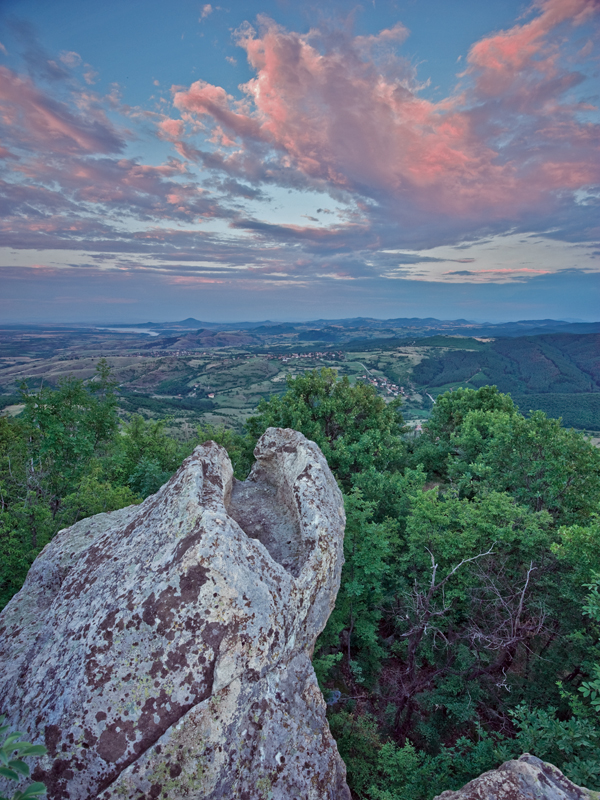 Some professional historians and many history buffs believe that the Thracians' culture has beens unduly overlooked. They claim it was much more advanced than it is officially presented. Long before the Greeks had their script, they say, the Thracians had been calculating time using elaborate rock-hewn observatories.

Asara, near Angel Voyvoda Village in the Haskovo region, is believed to be one such observatory.
Perched on a 600-metre high hill, the site includes several peculiarly shaped rocks. Some of them are covered with trapezoid niches. On top of the highest rock in Asara there are two graves.

For history enthusiasts of whom there are many in Bulgaria, the graves and the rock-hewn steps leading to them are the first stone calendar in the world, whatever that means. For more conservative archaeologists, they are the steps of an altar. According to another theory, Asara was a sanctuary and a fortress guarding the Thracian gold mines in the region.

There is no clearly signposted path leading to Asara. To find it, start from Angel Voyvoda's highest street and go up the hill for a trek of at least an hour. Good shoes and long trousers are essential, because of the snakes and thorns.

In 320 BC, Thracian King Seuthes III (330-300) celebrated his victory over the successors of Alexander of Macedon in a proper fashion. He built a city from scratch, he named it after himself, Seuthopolis, and promptly made it the capital of his realm.

Spreading on 12 acres, Seuthopolis was quite modern, with a grid of perpendicular streets and an agora. There was a palace for the king and spacious mansions for the aristocrats, all defended with a fortress wall.

Seuthes III built the city with the idea that it would last for centuries, but he was wrong. Seuthopolis was raided in 270 BC by invading Celts and then abandoned.

The city was discovered in 1948, when Communist Bulgaria decided to built a reservoir over it. The historical value of the well preserved Thracian city was downplayed and archaeologists were given only six year for excavations. In 1954, the Georgi Dimitrov Dam was filled with water and Seuthopolis disappeared for good.

The city is still underwater, and but the dam is now called Koprinka. Locals allege one can still see remnants of its walls while swimming in low water. In the mid-2000s, there was a project to build a wall around Seuthopolis, drain the water inside and turn the ruins into a tourist attraction. It hasn't materialised yet. 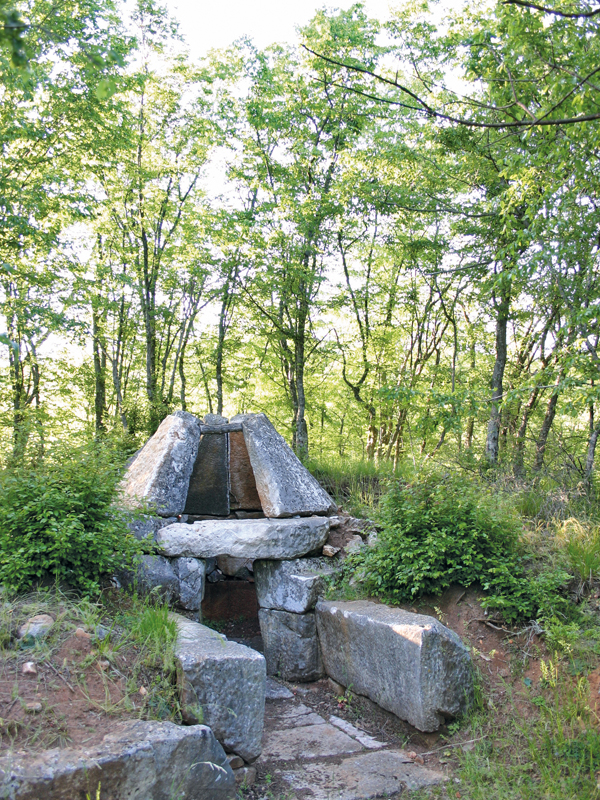 Major Thracian tombs are on the tourist map but if you want to walk around a Thracian necropolis undisturbed, go to the Strandzha mountain.

Hidden at the end of an unmarked road near Malko Tarnovo, the Propada necropolis is a place of about 40 low burial mounds built between the 5th Century BC and the 4th Century AD. There are two small tombs, one of stone and one of bricks, both in bad condition, but what makes a visit to Propada truly remarkable is the graves of ordinary Thracians. Humble and made of stone slabs, they are scattered on the ground in the shadow of the thick oak forest. Most of them are open, as if their inhabitants have left them long time ago. 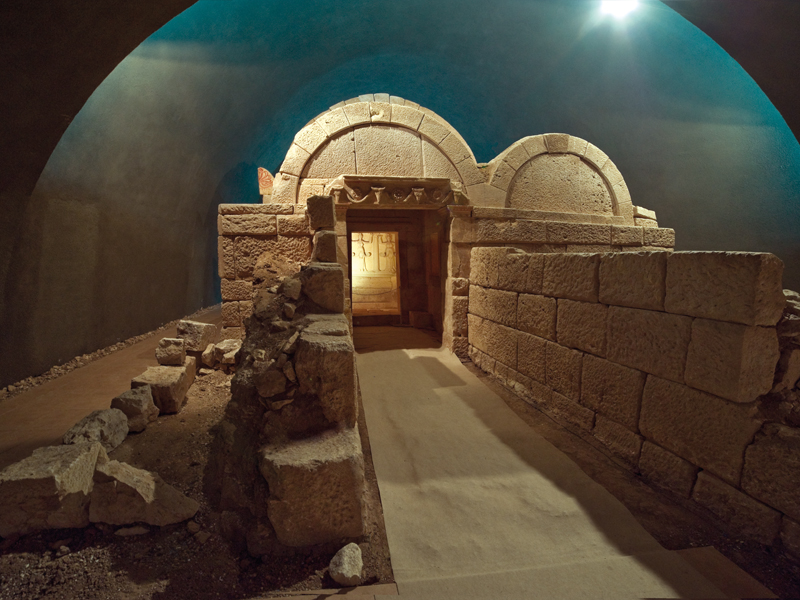 The Sboryanovo nature and history reserve near Isperih is one of the best places for Thracian tourism in Bulgaria. Here are the remains of Helis, a Thracian stronghold and trading centre from the 4-3th centuries, and several shrines and tumuli.

One of the burial mounds preserves an astounding monument of Thracian art, the first and so far only example of Thracian sculpture. The stone burial beds of the deceased Thracian aristocrat and his wife lie in the chamber, overlooked by a row of 10 caryatids with wide-open eyes and long arms. These rude figures were probably Thracian rather than Greek made. The mural above them, however, is a lot more intricate. The deceased, on horseback, is receiving the wreath of immortality by a tall regal woman, the Great Goddess of the Thracians.

Excavated in 1982, the Ginina Mogila mound is now on the UNESCO World Heritage List. It is is open from 1 March till 30 November, Wednesday to Sunday from 9 am to 5 pm. 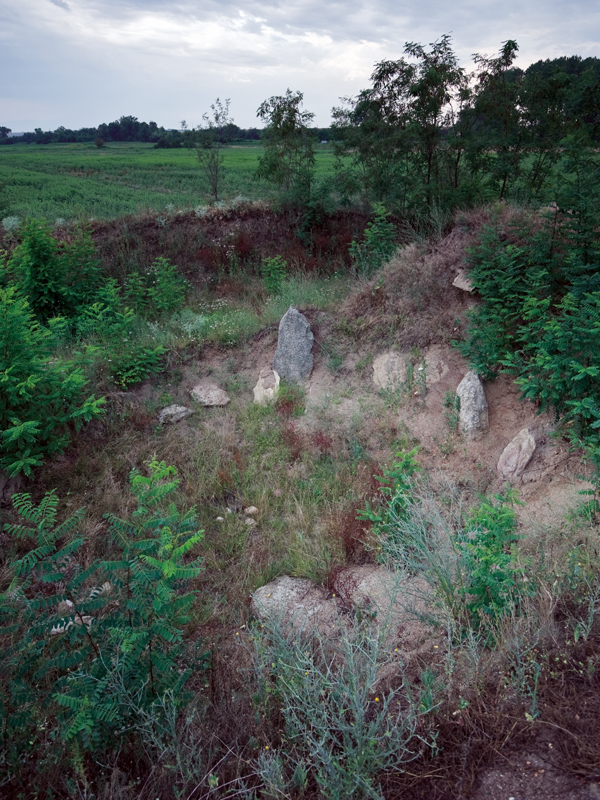 One of the strangest and saddest remains of the Thracians, the cromlech near the village of Staro Zhelezare near Hisarya, is hard to find – and hard to look at.

Until 2002, on there was only a Thracian mound here. Dr Kitov decided to give it a go but instead of the usual grave or tomb inside, he discovered a circle of 24 erect stones – and nothing more. A mystery.

Dr Kitov speculated that he had found an astronomical observatory. Another hypothesis suggested the cromlech was made in the 2nd Millennium BC, at a time when the Thracians were busy building megaliths. For some reason, it was covered with earth after the 7-6th centuries BC when mounds became fashionable. Why? No one knows.

Sadly, after its much published discovery the cromlech was abandoned. The soil left by Dr Kitov's team to keep the stones erect was washed away and the boulders fell to the ground. It took just a few years for a structure that had survived for millennia to fall apart.

The cromlech is less than a mile east of the Staro Zhelezare-Novo Zhelezare road.