Merry men distil their own booze in late summer

If you have at least one Bulgarian friend and they have still not treated you to home-made rakiya, there are two possible explanations. They are sick – too sick to drink. Else there must be something very wrong with your relationship.

Rakiya is one of the national beverages of Bulgaria and the home-made stuff is held in the highest esteem. In fact most Bulgarian only drink mass produced rakiya in restaurants or when their home-made variety runs out.

Even those who do not make their own liquor know a guy or two "just round the corner" who sell "excellent stuff," and are eager to share it with friends – especially when these friends are foreigners in need of a quick introduction to the Bulgarian way of life.

Sometimes, home-made rakiya is smooth with a strong aroma of apricots, quince, grapes or plums. It can also be shlyokovitsa – awful stuff that stinks of petrol – but people will still drink it.

If you want to see how home-made rakiya is distilled, late summer is your season. While driving in rural Bulgaria, you just need to ask in some village where the local kazan, or distillery, is. You will be guided to an obscure yard on the outskirts of the village, where the air is thick with the smell of rotten fruit, burning wood and fresh alcohol. A group of tipsy men will greet you with a mixture of bewilderment and pride, and take you to some tiny building where a copper pot still is slowly boiling over the fire. Then, they will pour you a small glass of the colourless liquid dripping from the protruding pipe.

This improvised rakiya tasting is crucial for production. The commercial distilleries have alcohol metres to measure the alcohol percentage, but traditionally people rely on their taste buds. Every batch of rakiya is tasted many times by everyone present. At the end of the day, the men on distillery duly find their way home, perhaps with some difficulty.

Making rakiya is an art form. Everyone knows a trick or two and is ready to argue with fellow rakiya makers. 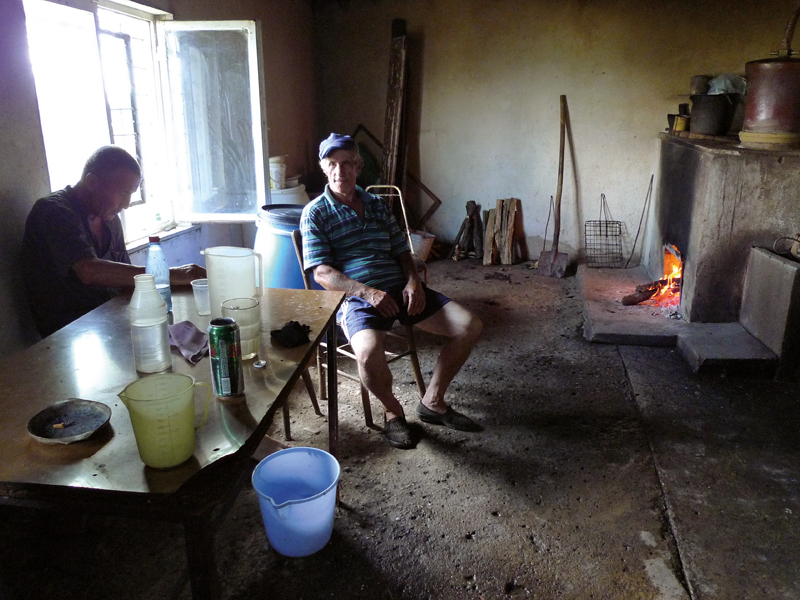 A proper rakyia distillation takes hours and many tastings

Rakiya is made from marc, which consists of fermented fruits which are boiled and distilled. Grape rakiya and wild plum rakiya are the most popular in Bulgaria, but some regions produce their own varieties. Troyan, in the Stara Planina, is famed for its plum rakiya, and in Silistra on the Danube you will be treated to apricot rakiya. Around the southern Black Sea figs are used, and until recently rakiya flavoured with rose was common in the towns in the Valley of Roses. Those who want things done really properly even take the trouble to de-stone the fruits before distillation.

Not all marc is that appealing, however. People frequently make rakiya using old fruit compotes which have gone off and should be thrown away.

An important element to take in before the actual distilling starts is the amount of marc needed. Grape is best, as 100 kg of marc give 16-18 litres of rakiya. The same amount of plum marc produces about 6-10 litres, and wild plums – about 4-6 litres.

The marc ferments for a time until it becomes sufficiently sugary. If it does not perform properly, sugar can be added, but you will risk ending up with hangover-boosting rakiya.

When the marc is ready, it is taken to the local kazan. Many people have their own pot at home, as these are sold at markets and beside the road by itinerant craftsmen. The real experience, however, is for the rakiya maker to go to the village distillery with some friends to "help" with the tasting.

Communal distilleries are also staffed by often experienced locals to ensure the risk of ending up with rakiya containing dangerous methyl alcohol is minimised. In the 1990s, illegal distilleries flooded the market with cheap rakiya and other liquors, which sent many to hospital – or to the grave. 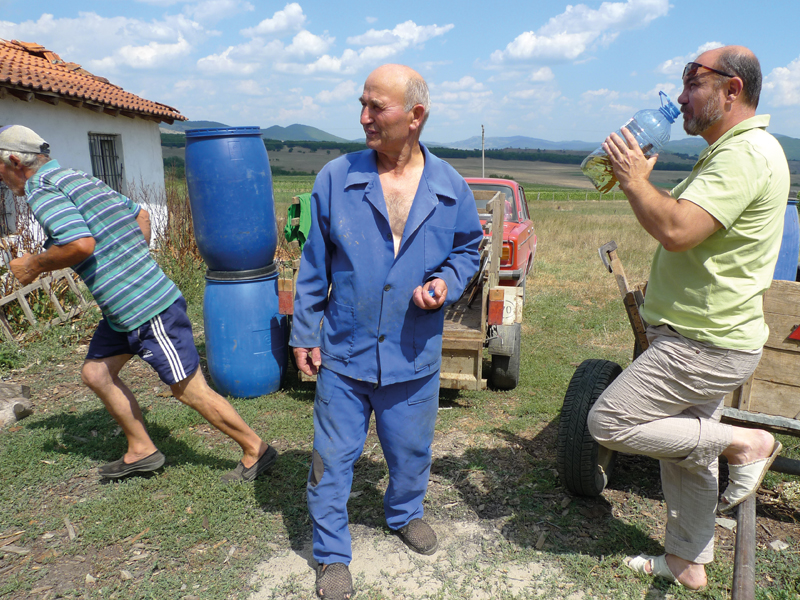 Even uninvited guests are treated with a gulp of fresh rakiya

Methyl alcohol concentration is higher in the first half litre that drips from the distilling pipe. Bulgarians called this liquor parvak, or the firsts, and often keep it believing it is very good for massaging backs and feet.

Then comes the true rakiya. It is colourless, with an alcohol content of about 50-60 percent. As the liquid drips down the pipe, the percentage decreases until the rakiya becomes the weak patok. When patok appears, distillation is over. A refill with a new batch of marc is needed.

To produce a stronger drink, some will distill their rakiya two or three times. This process is called prepichane, or burning. Rakiya which is dvoyno prepechena, or twice burnt, has been distilled three times, and the alcohol content can reach up to 90 percent. People offering such a drink are extremely proud of it, but as a general rule – and as a matter of common sense – such rakiya should be diluted with water. Some people say a proportion of one to two is ideal, but others consider this to be too liberal on the water.

Rakiya from aromatic fruit is never distilled a second time, as the process kills off the scent.

The average home-made rakiya is around 40-50 percent proof.

When distillation is over, the rakiya is poured into bottles. A sliver of mulberry may be added ad libitum, to change the colourless liquor into the golden rakiya everyone knows. Some experiment with adding coffee beans.

Then, the rakiya is stored in a basement. In some families it is a way of measuring how time passes. Every vintage is labeled, with a bottle or two left in "waiting." These are opened after ten or more years, on special occasions like weddings or anniversaries.

Rakiya has been a part of Bulgarian everyday life for centuries. It probably developed in the Balkans during the Ottoman rule, deriving from the Arab arak. In the Balkans, its closest relatives are the Serbian rakyia, the Greek tsipouro, the Romanian cuika and the Turkish rakı.

By the 19th Century it had already become a staple. In 1858, when the sultan appointed a Bulgarian as governor of the vassal region of Moldova, the Bulgarians living there immediately petitioned the new governor to end the state monopoly on rakiya distilling. 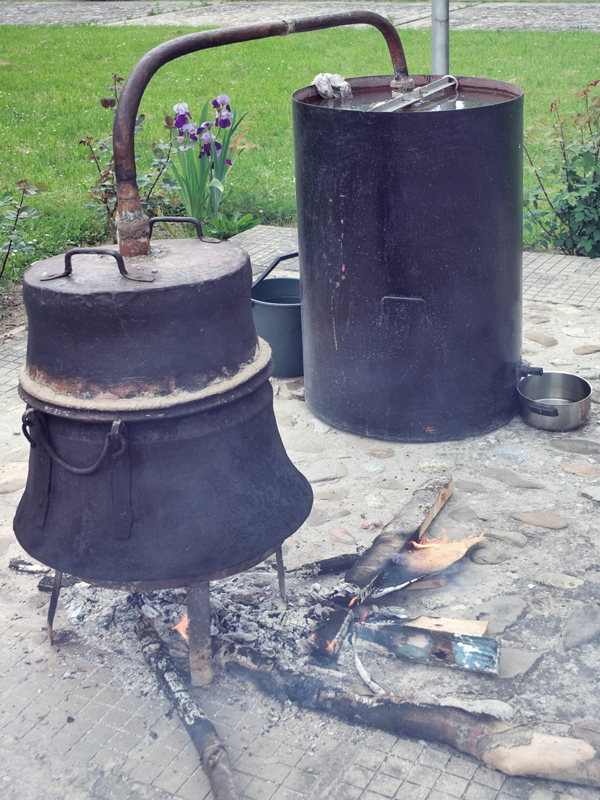 The A traditional rakiya pot still. Sold from roadside merchants

EU has threatened the Bulgarian rakiya tradition. When Bulgaria joined, a quota of 40 litres per person of taxfree home-made rakiya was introduced. Bulgarians reacted in true Bulgar fashion. First, they complained and held some demonstrations. Then they quietly navigated around the regulation.

Village distilleries simply continued producing taxfree rakiya with no one to watch. In 2011 the state urged them to register and to pay excise duties for overproduction. In 2012 the revenue was still suspiciously low.

Another outcome of the enhanced regulations has been a revival in the popularity of home distilling in shiny copper pot stills or in old, specially adapted washing machines. Whatever the EU or the national government does is bound to fail: depriving Bulgarians of their age-old right to make their own rakiya is like depriving the French of moldy cheese or the Danes of beer.