That should have been the capital of Bulgaria

To centralise or not to centralise was not the crucial question in all the 1,300 years of Bulgarian history. Born in the mighty shadow of glorious Constantinople, Medieval Bulgaria was always striving to create its own shining capital. The 700 years of Byzantine and Ottoman rule did little to ease this attitude, and when freedom was finally achieved in 1878, the matter of the new capital became the focus of attention.

In 1879, Sofia was chosen for a single reason. The independent Principality of Bulgaria only covered the Sofia Plain and the lands north of the Stara Planina. The young and ambitious nation, however, dreamt of soon being united with Bulgarian-populated territories still in the Ottoman Empire. If the dream were fulfilled, Sofia would be at the centre of a united Bulgaria.

These dreams never fully materialised, but Sofia quickly grew into a real capital, attracting people, investment and energy from all over Bulgaria. Today, it is the most populous Bulgarian city, the official home of 1.36 million of the 7.36 million people in the country.

Sofia, however, is not Bulgaria and the country has a number of other towns that could easily dethrone it as the capital. Here is our list of potential rivals. All of them have something many see as essential for a capital, which Sofia lacks – they are either on the sea shore, or on a river bank.

The city: Tourist-wise, Veliko Tarnovo is among the best internationally known places in Bulgaria. It boasts a picturesque old city, a multitude of restaurants, an university and a lively expat community. 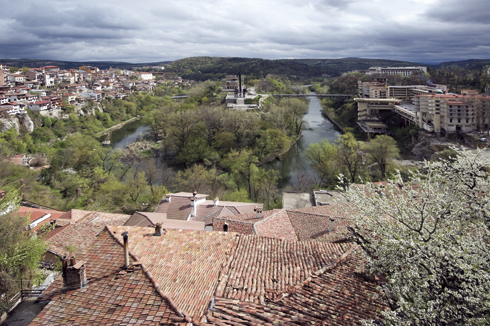 Pros: Tarnovo already has a long history as a capital. It was the central city of the Second Bulgarian Kingdom from 1185 to 1393 when the Ottomans invaded. It is of little wonder that after 1878, Tarnovo was essential in the building of the state. In 1879, the first Bulgarian Parliament met and adopted the first constitution there. In 1908, in Tarnovo, Prince Ferdinand proclaimed full Bulgarian independence from the Ottomans.

The city: Probably Bulgaria's fastest developing city is the home of a busy port, the internationally famed Spirit of Burgas music festival, and the LUKoil refinery, said to be the biggest employer in Bulgaria. Tourism is important too, with Sunny Beach Resort and a host of other places for sun, fun and a second home close by. Pros: Burgas's greatest merit is its entrepreneurial spirit. By the middle of the 19th Century, what is now Burgas was just a sleepy fishing village. The political and economic changes of the following decades, and migration from far and wide, turned Burgas into a bustling city, one of the riches and most cosmopolitan in Bulgaria. It remained so even under Communism, and today the city and the region are the most popular tourist destination in Bulgaria.

Cons: If Burgas does become a capital, the southern Bulgarian Black Sea coast would be even more crowded.

The city: Bulgaria's most European-looking city is a real gem. The centre is a pleasant collection of fin de siècle façades and avenues, and the bridge over the Danube forms one of Bulgaria's busiest borders, bustling with international trade. Pros: It's on the Danube, and it shows – in the middle of the 19th Century Ruse became the major point of European influence leaking into the Ottoman Empire. As a result, citizens of Ruse enjoyed theatre, classical music, railways and the wonders of modern agriculture while the rest of Bulgaria still had both feet firmly in its Oriental lifestyle. Europeanisation continued after 1878, and Ruse remained one of the best places for business, travel and culture in Bulgaria.

Cons: Since the fall of Communism, the local economy has been struggling, and many people have left for Sofia or abroad, or commute to Romania where wages are higher.

The city: Bulgaria's biggest maritime city is a place of old fame and old money. About 7,000 years ago, while the rest of humanity still fancied shell trinkets, the people of what would become Varna wore gold. The city itself was founded in the 6th Century BC by Greeks, and today is probably the only Bulgarian city besides Sofia with a developed gourmet culture. Pros: Varna is splendid and regal, easily outshining its proletarian rival Burgas. Its Maritime Garden is arguably the most pleasant park in Bulgaria, and the cultural life includes popular international film, jazz, theatre and ballet festivals. Varna claims to have among the lowest unemployment rates in Bulgaria, with trade, ship and machinery factories still working. Tourism, agriculture, golf and green energy around Varna are important, too.

Cons: Too close to Russia.

The city: Plovdiv claims to be one of Europe's oldest continuously inhabited cities. In it, ancient, medieval and modern culture blend in an inimitable combination, boosted by a cosmopolitan crowd, much international traffic and a functioning economy. Pros: Bulgaria's second city has an array of universities and an active artistic community. The descendants of generations of wealthy merchants and educated burghers, the citizens of Plovdiv still consider themselves a bit aristocratic. The city has also had some experience as a capital. In the Roman era it was the main city of the province of Thrace, in the 14-15th centuries it was the capital of an Ottoman province, and in 1879 became the main city of the autonomous province of Eastern Rumelia. In 1885, Plovdiv sacrificed its privileged status for the greater good – the unification with the Principality of Bulgaria. Plovdiv is only an hour-and-a-half's drive from Sofia, which would make moving the administration easy.

Cons: Even today, crossing the Stara Planina is an obstacle for people from northern Bulgaria.