Monument to Bulgaria's past gets transformed for future

There is hardly a visitor to Sofia who has not crossed the vast square in front of the National Palace of Culture, or NDK, and not gasped at the sight of this strange structure that looks as if coming straight out of an urban nightmare piece of sci-fi.  Rising 35 metres from the ground, the tall thing curls somehow at an angle in the air, ending up looking somewhat like a wing. Ghostly human-like figures crawl and pose on its granite surface, where holes gape, revealing the rusting skeleton of steel. Huge metal characters form slogans, their meaning unintelligible, as most of the letters are missing. The base is off-limits, protected by a metal fence covered with colourful graffiti left over from some national street art contest. Sometimes, huge advertisements for mobile phones hang from its top.

This is actually a monument, and its official name is "1,300 Years of Bulgaria." It appeared on the square in 1981 as a grandiose addition to the opening of the newly-built NDK. The original idea was allegedly imposed on the sculptor Valentin Starchev by Lyudmila Zhivkova, then minister of culture and daughter of the Communist dictator Todor Zhivkov. The monument, according to Zhivkova's Socialist New Age beliefs, should represent the "eternal spiral of creativity, spirit and development."

Following these instructions, the artist created an angular spiral with figures representing the crucial stages in the evolution of the Bulgarian "spirit." At the base, the image of King Simeon's Golden Age of the 9th Century symbolises the nation's great potential for creating culture. The so-called Pieta figure embodies the periods of stagnation and struggle for survival. The bright future, however, is always present in the huge worker's statue at the top of the monument. Starchev called it "The Creator."

The structure's symbolism was enhanced with slogans by Bulgaria's most famous 19th Century revolutionaries. There is Levski's "Time is within us and we are within time," and Botev's "He who falls fighting for freedom never dies." There is also "Walk on, revived people...", taken from a late 19th Century song dedicated to Cyril and Methodius, creators of the Bulgarian alphabet.

The project was ambitious and so were the deadlines.

Struggling with an impossible schedule, the sculptor and the construction workers spent 24 hours a day on the site. Despite all their efforts, the monument was still unfinished on its ribbon-cutting day, the top not yet clad in granite. The builders came up with a last-minute solution and covered it with plywood camouflaged to look like stone.  This was the first of many setbacks experienced by "1,300 Years of Bulgaria" in the 30 years of its existence. Within days more followed.

The public was not taken with its appearance – or with the expense involved – and within a fortnight had coined a handful of imaginative nicknames. Most of them are four-lettered words – a pity, indeed, we can't publish then as at least two of them manage to combine numbers, geometry and a particular part of the male anatomy. Probably the only one that we can put on the page is "The Fallen Messerschmitt," a reference to the exceptionally ugly Second World War German warplanes. The nicknames have stuck, and most people passing by the monument know it as the "Five-Angled Seven-****," or the "Five-Angled" for short, or the Messerschmitt, rather than as "1,300 Years of Bulgaria."

It was not only public opinion that was against the monument. Gravity was, too. The tight deadlines led to shortcuts in the original construction, and sloppy building practices. As a result, the "1,300 Years of Bulgaria" monument started to disintegrate less than a year after it was finished. No one bothered to patch up the structure.

By 1989 it had already deteriorated badly. Overwhelmed with economic difficulties, people stopped paying any attention to it. Its subterranean level, once mockingly nicknamed "The Catacombs of NDK," turned into a rubbish dump, the haunt of the homeless and a meeting point for drug addicts. The granite slabs continued falling off, and many of the metal parts were stolen and sold for scrap.

In the early 2000s the site was so dangerous that a fence was erected to stop people entering the Catacombs. This fence was soon turned into a graffiti canvas and the debate about what to do with the structure waxed and waned. Some proposed that it be torn down on the grounds that it was both ugly and dangerous. Others suggested a complete restoration or adapting the remains into a new structure, such as a water cascade or a climbing wall. Valentin Starchev defended his creation, giving rise to rumours that he still had copyright over it and that it could not be demolished without his consent. 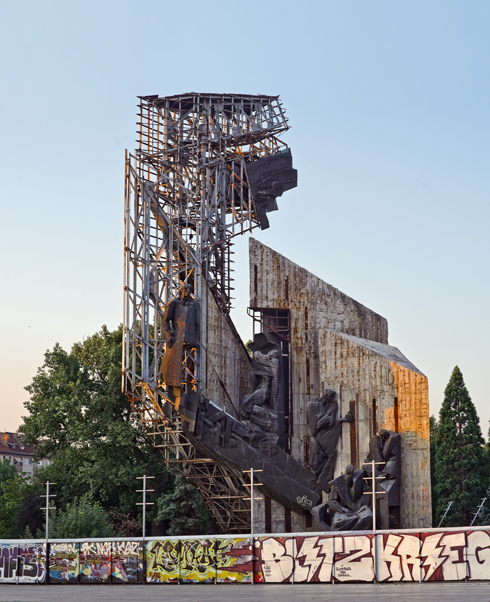 Meanwhile, the monument became the metaphorical playground for a variety of of eccentrics. One Feng Sui specialist, for example, blamed the bad karma of Bulgaria on the insensitively designed and located Messerschmitt. Scores of youngsters attempted to break through the fence (easy enough) and to climb up the monstrosity (difficult and dangerous). Some of these daredevils got stuck half-way up, necessitating the intervention of the fire brigade to get them down.

Others, including the three children who climbed the Messerschmitt this summer, succeeded. Their feat was filmed and broadcast on the Internet, causing an outcry. This expedition probably sealed the fate of the monument as, days after the successful ascent, Sofia City Council decided to remove the steel structure and granite slabs of the upper part of the monument by the end of the summer.

At the beginning of August the removal of the most dangerous parts of the monument started, resulting in about 1,000 tons of scrap metal. Architect Starchev admitted to the media that the "1,300 Years of Bulgaria" with its 1980s looks was not now "up to the times" and accepted the council's idea of re-imagining it once more. This coincided with the frantic work to finish the construction of a new underground station, just meters away from the Messerschmitt. Public discussions about the monument's future are planned to start anew.

However, there are objections. On the very day that the first bits of the monument were removed, the Bulgarian Artists Union issued a declaration. Its members objected to the dismantling because it "would be a crude breach of all the principles of any democratic society, where all important decisions should be taken by the competent authorities." The union also objected to any public input into the future fate of the monument, noting that "the decisions for the design of monuments are taken by qualified persons and conform to the highest moral and aesthetic principles, which are brought about by people of the highest erudition and the highest understanding of the culture of the visual arts." The union is also openly against any changes to the Fallen Messerschmitt monument, stating that it was ahead of its time and still bears its erstwhile "epic aura." The missing parts revealing the construction just give it a modernist twist.