Bulgarians are proud of their ruins. There is probably no expat in the country who has been spared the conversation with an overenthusiastic history lover boasting that Perperikon outshines the Acropolis in beauty and importance or that the new discoveries in Sofia's Roman centre make Rome itself look provincial in comparison.

Indeed, over their millennia of continuous habitation, the Bulgarian lands have acquired more than their fair share of prehistoric shrines, ancient cities and fortresses.

The country, however, is also full of another type of ruin. Most of those are less that 20 years old, and can be found everywhere – in suburban Sofia, along busy roads and near small villages. No one, however, is eager to boast about them. If you point to them and ask what they used to be before they became a ruin, be prepared for a lot of grumbling about that "damn democracy," when everything built under Communism – factories, schools and houses – was destroyed for no particular reason except to enable Bulgaria's new "businessmen" to rob the state of its properties.

The reality behind the appearance of Bulgaria's newest ruins, however, is somewhat more nuanced. You'll find it here, in our second article on the subject. If you missed the first one, which is dedicated to the deserted military bases and factories, the Belene Nuclear Power Plant and the empty villages, check this article out.

Under Communism people often suffered shortages for things as varied as electricity and toilet paper. The Party, however, was never short of money when it needed to boost its own image with the construction of grandiose monuments. The building craze peaked in the late 1970s and early 1980s, when the extravagant celebrations of the 1300 years of the founding of the Bulgarian state became the pretext for the realisation of several ambitious projects like Buzludzha. With Communism gone, most Party property was nationalised. In the years that followed, no one was able or willing to take care of this legacy, as the Bulgarian planned economy struggled on its way to the open market. The grandiose monuments, which were often shoddily built because of tight deadlines, quickly decayed into ghostly ruins. No one has the exact numbers, but it is estimated that there are at least 10,000 such monuments in Bulgaria of 2012. 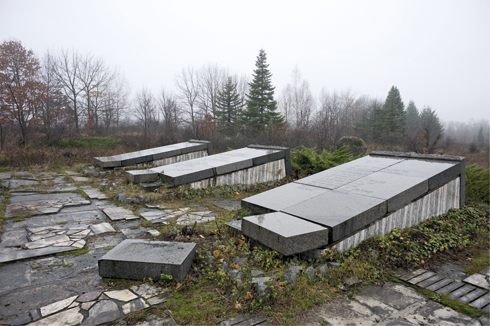 Remains of the overgrown and crumbling partisan movement monument at Balova Shuma area, near Montana. Locals mockingly call it Monument to the F***ed Up D**k

The closure of railway stations in Bulgaria started in 2002 and reflected the axing of dozens of lossmaking railway routes. The process continues. In 2009, for example, about 60 stations were closed down or lost their staff. In the latter case, the trains still stop, but passengers buy their tickets onboard. 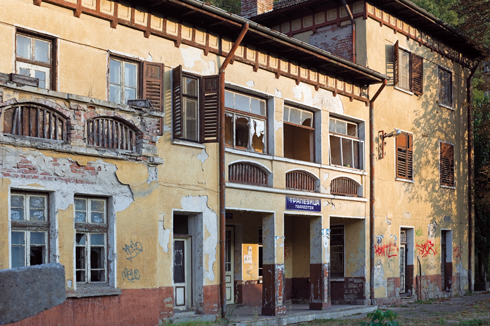 This policy is the result of the ceaseless – and seemingly fruitless – efforts of a series of Bulgarian governments to reduce the losses of the Bulgarian National Railway system. Meanwhile, the abandoned stations are left to the attentions of looters, who steal everything moveable – from scrap metal to bricks and rooftiles.

Half-built blocks of flats; holes full with water, frogs and reeds; rusting steel skeletons – many of the modern ruins in Bulgaria are simply the remains of miscalculated projects. Some are the legacy of Socialism and were abandoned half-built in the wake of the post-1989 crisis or the sudden discovery of some serious engineering error, such as groundwater where there should not be any.

Many, though, are the stillborn children of the young Bulgarian open market economy. In the 1990s, so-called building pharaohs persuaded ordinary people to invest their money in lavish housing estates. Then the pharaohs – a Bulgarian term for ponzi scheme operators – left Bulgaria, taking the shareholders' money and leaving some unpromising hole in the ground where the estate should have been. The building craze of the 2000s saw the next generation of fraudsters selling flats in unbuilt projects. The crisis complicated the problems as many developers went bankrupt and left their much-advertised housing and office projects half-finished. 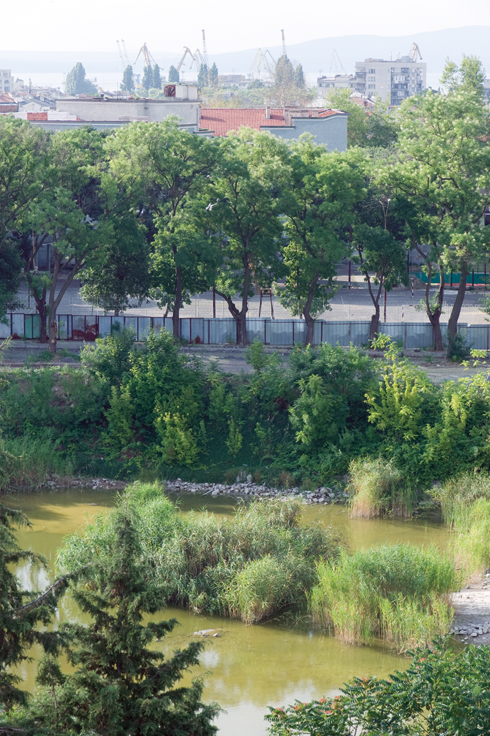 One of the symbols of Burgas is in fact one of the grandest failed projects of Communism. Following the demolition of several street blocks in the centre of Burgas in the 1980s, plans were drawn to erect a Communist-style supermarket. Construction started, but was abandoned after the collapse of Communism. Remains of the works could be seen well into the 2000s in the cordoned-off area. It is still fenced, and a natural mosquito-breeding pool has formed just steps from the central square of Burgas

Housing estates with crumbling walls, leaking roofs and broken windows are a common occurrence in Bulgaria. Some lie empty. Others are inhabited, as indicated by their façades decorated with satellite TV dishes and colourful arrays of washing.

The empty buildings are the remains of state housing projects built for employees of factories and the families of officers in military bases. When the factories and the bases shut down, the people left. Some of the blocks of flats remain empty to this day.

Others, however, attracted destitute and homeless families, usually Gypsies. Some of the derelict apartment blocks are, theoretically, municipal property rented to poor citizens. The majority were built for the Gypsies, who were forced to settle after the 1960s. Suffering from high unemployment rates after 1989, most of the inhabitants were unable to pay their utility bills and token rent. Most city councils ignored the problem for years. The results are ghettos where poverty, crime and ethnic tensions are the norm. 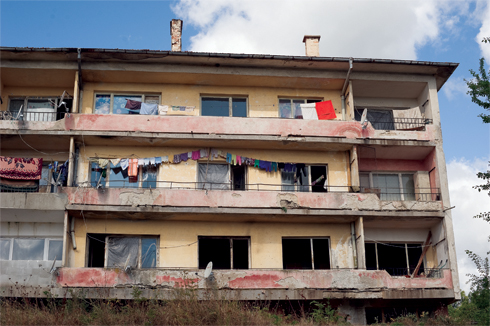 There is another type of decaying houses in modern Bulgaria, which you notice because of their elaborate turn-of-the-19th Century façade. Such buildings are usually monuments of culture, and their piteous condition is entirely intentional. As a matter of course, their owners want them demolished and replaced by some flashy new business centre, yet another shopping mall, or block of flats. The only way to achieve this is to leave the building exposed to the elements and hope it collapses. To rephrase Stalin: no monument of culture, no problem.

There is hardly a sadder sight than that of an abandoned school, and Bulgaria is full of them, mainly in rural areas. They are the result of decades of a falling birth rate, which began in the 1960s, combined with rapid urbanisation. The consequences were felt even under Communism, when classes in village schools were often merged. The mass emigration after 1989 of about a million Bulgarians, most of them young, further complicated the situation. The birth rate went down even further, leading to a significant drop in the number of students. Between 2000 and 2009, there was a 30 percent reduction in Bulgarians of school age, pre-schoolers reduced by 26 percent and the highschool population by 30 percent. The need to reform the school system became evident and the controversial decision to close down schools was taken. In 2007, 111 schools were closed and the process peaked in 2008, when 340 schools were closed. In 2009 another 44 schools went. 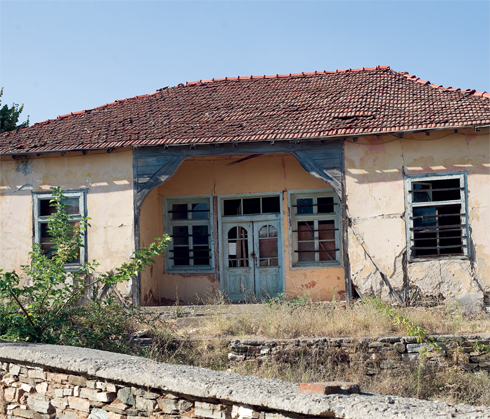 The unwanted school buildings and properties were left empty. Later, many were auctioned and sold – often for derisory sums – to entrepreneurs aiming to turn them, with varying degrees of success, into spa centres, rural hotels or sometimes old folks homes.

In almost every village lie abandoned farms with empty cowsheds, hen coops, pigsties and office buildings. Often, long-forgotten tractors and ploughs rust in the deserted yards. All of them belonged to Socialist-era TKZS, or collective farms. Collectivisation, in the Soviet kolkhoz fashion, was imposed on Bulgarian farmers soon after the Communists seized power in 1944. By the middle of the 1950s all landowners, large and small, had "joined" their lands and livestock to the TKZS. Whoever wanted to stay out would often be send to a labour camp. The newly-formed cooperatives, however, never inspired much enthusiasm among the workers and many of those who had land no more left for the cities in search of better paid jobs. The villages emptied.

After the collapse of Communism restitution of nationalised farming lands became a bulwark of what the first round of reforms. In 1992 the democratic government of Filip Dimitrov started to restore land and livestock to the original owners or their heirs. Two problems, however, arose. Too many people had left the villages, and their sons and daughters were not eager to return, having no knowledge of or interest in farming. Several decades of urbanisation were enough to kill a centuries-old agricultural tradition. In addition to that, after the death of the former owners, their lands were divided among children and grandchildren, leading to smaller and smaller plots unsuitable for commercial farming. Starting a business in the agriculture sector looked like a folly.

By 1996 the TKZS were no more. Some villages successfully turned them into working coops but many failed. The TKZS properties were liquidated, livestock were slaughtered and the rest was left to decay – which it is to this day.