Reconstruction of the head of Mostich, a 10th Century aristocrat thought to possess the last traits of Asian facial features in a Bulgarian © Anthony Georgieff

Faces from the past come to life north of Veliko Tarnovo

Seemingly, there is no reason why it should be any other way. The quiet little town looks just like any place you drive through on your way to some more interesting destination. However, if you decide to stop and ask for the old school building, you will come upon one of the most interesting museums in the country.

As soon as you enter the meticulously kept garden in front of the museum you realise that you are about to see exhibits far more interesting than the usual collection of ethnographic objects one expects to find in such places. Part of the exhibition does actually consist of such objects, but the quiet alleys outside are lined on all sides with the tombstones of noble Romans who lived in the region 17 centuries ago. You can still see the faces of some of the dead carved on the tombstones by unknown sculptors.

In the museum there are more faces of people who passed away a long time ago. As a matter of fact, the corridors are crowded with them. Behind the glass a young Thracian lady looks out at you – she was buried with her ornate gold jewellery in the 4th Century BC. You can also see the elderly Bulgarian aristocrat Mostich, who died in Preslav in the 10th Century AD, as well as Samuil, King of Bulgaria. All these portraits are scientific reconstruction based on anthropological analysis of the skulls of the deceased by professor Yordan Yordanov. He is the foremost specialist in this field and was born in Polski Trambesh.

The anthropological and the archaeological halls are situated in two of the former classrooms. They are full of the remains and the remnants of people who inhabited this region many years ago. Among the artefacts one can see pieces of pottery as well as bones. The explanatory notes accompanying them resemble extracts from crime fiction – each scratch on a bone is evidence of the diseases and traumas suffered by its owner. 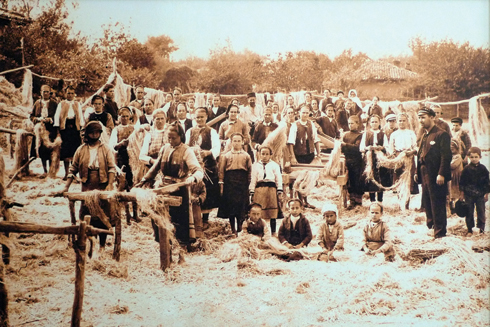 Most moving of all is the human skeleton curled in a foetal position which is displayed in the centre of one of the rooms. This is the position in which he was found during excavations near the village of Orlovets in 1993. The deceased enjoyed life and died 9000 years ago.