There is hardly a village in Bulgaria without a monument. Those to local victims of the two Balkan and the two World wars are the most common, followed by memorials to Communist partisans and monuments of workers and other "builders of Socialism." There are also the monuments to Revival Period figures, who were usually born or met their end in a particular village.

Gorna Kremena, near Mezdra in the north-west, is no exception. In the centre stand three monuments. One is to the fallen of the Balkans Wars of 1912-1913. The second sports the five-pointed star, one of the definitive symbols of Communism.

The third monument in Gorna Kremena, however, is one of a kind. The man with wavy hair was Ivan "Gorunya" Todorov. In 1965 he plotted to overthrow Bulgaria's Communist dictator Todor Zhivkov, and died trying. His was the only documented attempt ever by a Bulgarian to forcibly overthrow the Communist regime. But don't be misled into thinking Gorunya and his associates had been inspired by events in 1956 in Hungary or other anti-Communist movements elsewhere in the East bloc. What they disagreed with was Todor Zhivkov's politics mimicking Khrushchev's liberalisation. They wanted Bulgaria to keep running along Stalinist lines, just as did China, Albania and North Korea.

Born in 1916 in Gorna Kremena, Ivan Todorov was an early adherent of the leftist movement. In 1939 he was sent to prison for anti-government activity. He escaped in 1941 and became the first member of the Communist partisan movement from the Vratsa region. Later the same year, a group of partisans was already operational in the area, with Todorov responsible for its political activity. In 1943, known also by the nom de guerre Gorunya, he was sentenced to death.

Todorov, however, remained at large until the Communist takeover in 1944. At the beginning of the 1960s he was already a member of the Central Committee of the BKP, or the Bulgarian Communist Party, and a deputy minister of agriculture. In spite of his exemplary career, Todorov became increasingly unhappy with the rule of Todor Zhivkov, who had just managed to become head of both the BKP and the government.

To understand what was really happening, one needs to go further back several years.

The death of Stalin in 1953 led to a slow and partial liberalisation in the USSR, spearheaded by the new leader, Nikita Khrushchev. The Bulgarian Communists swiftly followed this shift in politics. In 1954 the Stalinist Valko Chervenkov was replaced as the head of the BKP by Todor Zhivkov, a minor personality for whom many predicted a short political life. Zhivkov, however, was to surprise everyone, unleashing cunning political skills which would help him to stay in power for the next 35 years.

In 1956, Zhivkov initiated the so-called April Plenum, reiterating the Soviet denunciation of the personality cult. During the plenum, Valko Chervenkov lost his other source of power – he was replaced as prime minister by the "reformist" Anton Yugov.

Party leader Zhivkov, however, was in pursuit of complete power. In the following years he installed trusted colleagues in key positions within the party and the government, and in 1961-1962 outmanoeuvred both Chervenkov and Yugov. They lost their Central Committee membership and Zhivkov assumed total control.

His position, however, was far from secure, as change was in the air.

In 1960 China broke with the USSR on the grounds of the latter's breach with Stalinism. Albania and North Korea followed Chairman Mao, and a new centre of power appeared.

Bulgaria remained on the side of Nikita Khrushchev, but many hard-core Communists in the country still nurtured a strong Stalinist sentiment. Gorunya was one of them.

When, in 1964, conservative Leonid Brezhnev ousted Khrushchev, Stalinists in Bulgaria decided that the political life of Zhivkov was about to come to an end. In this atmosphere, Gorunya started to put together a group of former partisans to form the core of a conspiracy, whose task was to organise a military coup against Zhivkov. By the beginning of 1965, the plotters had built a network which included a significant number of the top brass, including two army generals, the Sofia military commandant and a police general.

The ringleaders' past as partizani had taught them the rules of conspiracy, which they employed to conceal their plot from the omnipresent State Security. They used code names, speaking of the "Doctor" when they meant Ivan Todorov, and meeting only when they "coughed a little," meaning they were not being tailed. Afraid of being bugged, they met only in open spaces or talked under the distorting noise of running taps or the radio.

They were, however, unaware of two things.

Firstly, Zhivkov was doing everything he could to convince the new regime in Moscow that he had never been a follower of Khrushchev, and that he had simply gone along with current Soviet politics, and that he would do anything Brezhnev required. He succeeded.

Second, Zhivkov knew all about the plot and had set up the Duratsi, or Fools, Operation to counter it. Among other things, State Security agents had managed to install bugs in... the conspirators' peaked caps.

On 8 April 1965 the plotters were arrested. The secret operation resulted in a trial, where some were given up to 15 years in prison and others walked free.

Ivan "Gorunya" Todorov did not face the court. He was discovered on 8 April 1965 in his bed, a bullet hole in his head. The official cause of death was suicide, although his relatives and some researchers still suspect that he was murdered.

The Zhivkov regime did its best to keep news of the coup from the media. The sudden suicide of a government member, however, emerged as rumours that led to a wave of What-Really-Happened? speculation, including an article in Time magazine.

Zhivkov was eventually toppled from power as late as 1989. Soon afterwards, Ivan Todorov received a martyr's halo of a man who had fought against a dictator. His Stalinist beliefs were downplayed, and the monument in Gorna Kremena was erected with donations from local people. A portrait of Gorunya hangs on the wall of the village pub. People still believe that Ivan Todorov was a "true Communist," focused and idealistic, who tried to put an end to the corruption of the Socialist Zhivkov and his associates.

Gorunya's plot is the most famous and serious conspiracy against Zhivkov. Between 1960 and 1972, however, there were other attempts to overthrow Zhivkov or to change the politics of the BKP. 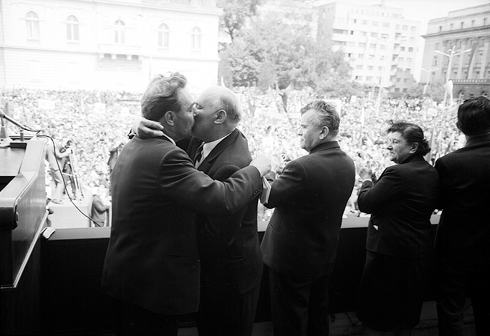 In 1962 Mitko Grigorov, Zhivkov's deputy in the BKP, plotted against his superior with assistance with some Moscow connections. Zhivkov, however, was better connected in Moscow and soon Grigorov was removed, becoming a footnote in history books.

In 1967-1968 some of Gorunya's associates, who had remained at large after the 1965 failure, reignited the conspiracy. They, however, also failed, ending up in prison and/or discharged from the army. Nevertheless, the northwestern part of Bulgaria became the centre of anti-Zhivkov sentiment. Zhivkov retaliated, turning the area into the most economically undeveloped in Bulgaria. It still is.

The last open rebellion against Zhivkov has elements of farce. The so-called Parvenetsko Shushukane, or the Whispering of Parvenets, was a 1972 meeting of Plovdiv apparatchiks in the nearby town of Parvenets. All of them were unhappy with Zhivkov and were presided over by Anton Yugov himself. Officially, the gathering was a birthday party, but when spirits rose, speeches critical to Zhivkov were given. The evening ended with the arrival of the State Security, who arrested everyone present.

The sad truth is that all of these attempts were organised by people who were either Stalinists, like Gorunya and his followers, or just power-hungry, like Grigorov and the "whispering" Plovdiv apparatchiks.

Probably the only senior BKP members who ever reacted against the totalitarianism of Zhivkov's rule and voiced the need for more democracy and transparency, were the seven from the so-called Kufardzhiev Group. On 1 June 1960, led by Nikola Kufardzhiev, they issued a letter to the Central Committee alerting them to the fact that Socialism in Bulgaria had transformed into a personal regime. The seven were denounced during an official meeting organised by Zhivkov, and were condemned as "traitors."