It is an old military plane, sometimes rusting, sometimes freshly-painted in silver or camouflage greens and browns. Sometimes there is even a commemorative plaque, but it rarely helps you to understand why the aircraft is there. The plaques are in Bulgarian and offer enigmatic information like: "Donation from 1949 recruitment." Asking the locals is no help, either. Most of them have no idea why they have a plane in their village.

These aircraft are actually monuments to Bulgarian military aviation. Some are dedicated to victims of this dog fight or that crash, others owe their existence to the nostalgia of retired pilots. Some mark a place of historical importance for the Bulgarian airforce – like that in Svilengrad, from where the first Bulgarian military crews flew during the Siege of Edirne in 1912. A great many of the grounded planes are there simply because some aircraft-lover managed to install them there. According to a list published on bgspotters.net, there are about 250 such planes in Bulgaria. The data, however, is unofficial and may be incomplete or incorrect. By 2012, 19 of the aircraft had been broken up and sold as scrap metal, a process carried out roughly between 1998 and 2007. Many of those still standing have suffered damage at the hands of local vandals and/or enthusiasts collecting parts as memorabilia.

The Ministry of Defence Airforce division keeps 63 of these aircraft. The location of 13 planes on the list is not specified, while the majority of the others are in public spaces in villages, towns and even the appropriately named Aviatsionen, or Aviation, Square in Sofia.

Most of them are MiGs and L-29s. These grounded planes bear witness to Bulgaria's former role in the Warsaw Pact. Before 1944, the Bulgarian airforce flew French Blériots and German Fokkers and Messerschmitts. In 1925 a Bulgarian aircraft workshop opened in Bozhuristhe, followed by a factory in Lovech in 1943. Before they shut down in 1955 and 1954, respectively, they had produced about 1,000 DARs, a Bulgarian-designed aircraft.

When Bulgaria entered the Warsaw Pact its airforce was transformed into Soviet MiGs, Ils, Tys and Yaks, plus East-German Lims and Czechoslovakian training L-29s. Up to 1989, the Bulgarian airforce had invested in about 500 Soviet fighter aircraft and about 70 helicopters.

When the Cold War ended, Bulgaria was forced to reduce its number of military aircraft to about 220, and in 1998-2003 10 airfields were closed down. At the moment, Bulgaria protects itself with Russian MiG-21 and MiG-27 jet fighters, the latter having been upgraded to meet NATO standards.

There are also regular proposals to buy Eurofighters, JASes and F-16s. Meanwhile, some of the old, decommissioned Socialist fighter aircraft await you in Bulgarian towns and villages.

On the square: MiG-17 fighter aircraft

The MiG in the square is a memorial to a Soviet crew who crashed in the area in 1944. It was restored in 2007. The L-29 is used as a playground by the children in the kindergarten, in spite of reports that its deteriorating condition makes it dangerous. 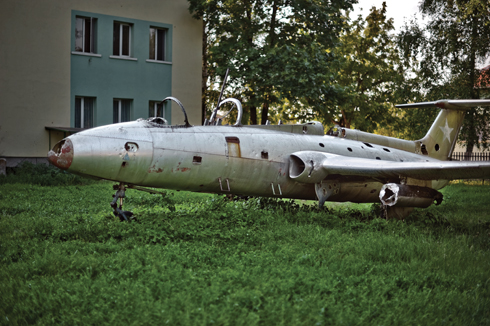 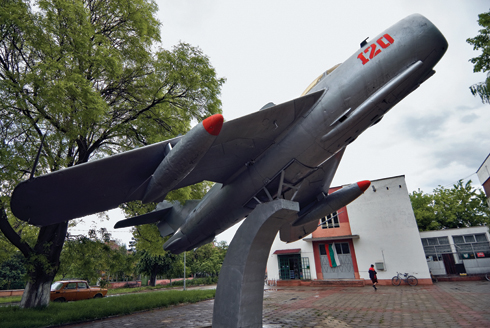 Made in the USSR

In the square by the church of the Assumption of the Virgin Mary: L-29 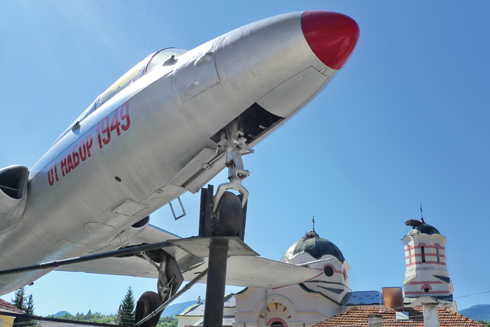 In Batak, there is a tradition. Every generation born in the city – Bulgarians still use the military term nabor, or levy, to describe such persons despite their gender – has to do something for Batak when they reach the age of 50. Some of them have built public water fountains and others playgrounds for the children. Those born in 1949 installed a plane in the centre, the idea of retired pilot Mitko Karlyukov, which was enthusiastically supported by his nabori. The L-29 was bought and placed in the square in 1999.

In the village centre: MiG-17 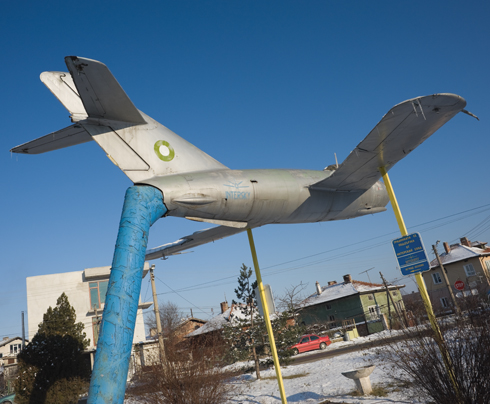 Nothing is known about this plane. Local people use the fighter as a meeting point.

In the centre of the village: MiG-17

Nothing is known of how, when or why the fighter ended up here. During the Cold War, Gramatikovo in the Strandzha was at the heart of Bulgaria's most heavily militarised zone, the border with Turkey.

On the road to the village of Sirishtnik: MiG-17

If there is something like a family of flying aces in Bulgaria, then it is that of Kovatchevtsi's own Karamfil Stamenkov, a reservist colonel. He and his three brothers were all fighter pilots. All told, they completed 161,627 flights and 57,448 flying hours. Karamfil Stamenkov is also the owner of the only private Museum of Aviation and Astronautics in Bulgaria (entrance free), in Kovachevtsi, which has a collection of model aircraft, family medals, part of the NATO missile that fell on Bulgarian land during the bombing of Yugoslavia, and specimens of astronaut food. 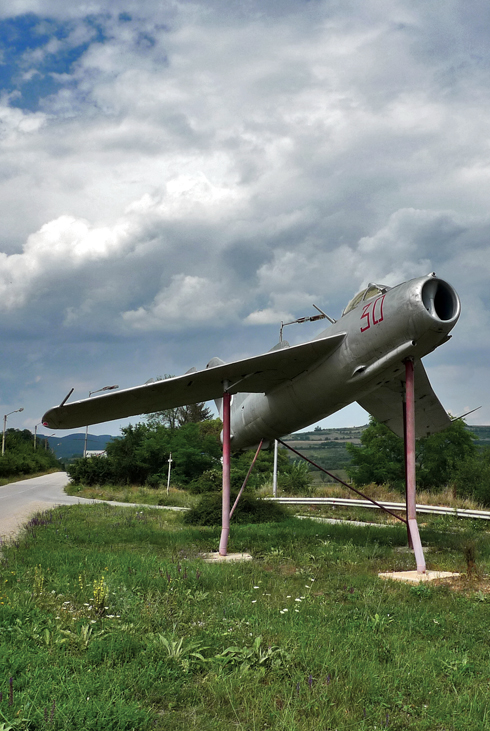 Colonel Stamenkov also has a plane, after a fashion. The MiG-17 fighter parked in front of the make-shift museum is the same machine which Stamenkov flew for 15 years. It was given to the municipality by former head of the General Staff General Miho Mihov, also a pilot and a student of Colonel Stamenkov. 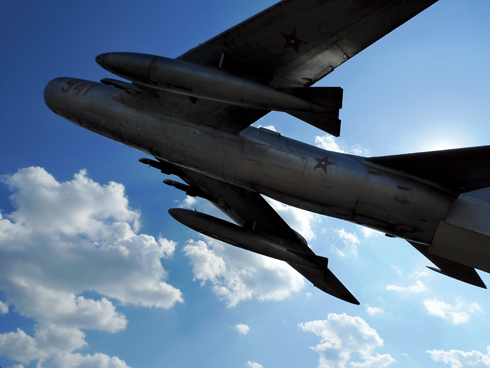 Welcome to the open-air Aviation and Spacecraft Museum, created in 2008. Why here? Indeed, few Bulgarians know that the nation's second astronaut, Aleksandar Aleksandrov, who spent nine days of July 1988 on the Soyuz TM-5 spacecraft, was born in Omurtag in 1951. The open-air museum brings together the three types of aircraft that Aleksandrov has flown. The MiG-19 was the first to be placed here, followed by other machines. The reason for the missile is somewhat unclear. It was an M-11 that downed an American U2 aircraft in 1960, leading to a new phase of confrontation between the great powers of the Cold War.

Made in the USSR and China

Number built: 2,172 (not including Chinese production)

Made in the USSR, also in India and Czechoslovakia

Retired: 1990s in Russia, still in use in a number of countries, including Bulgaria

Made in the USSR

Near the village centre: MiG-17

It is tempting to speculate that this fighter is a memorial to the village's greatest son, wrestler Dan Kolov (1892-1940), who made his name and fortune as an undefeated champion in the United States. His best-known position was called "a plane," and after his return to Bulgaria in 1935, Kolov donated money to the state for the purchase of either a military plane, or one to deliver post (sources differ). 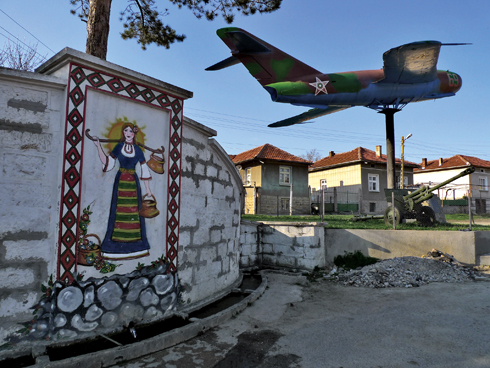 However, the reason for the MiG-17's presence in Sennik has nothing to do with Dan Kolov. Sennik is also the birthplace of former head of the General Staff, General Miho Mihov, the aircraft being the same machine he flew.

Sofia Military Museum: Several types of MiGs and a training L-29 in its open-air section

Unsurprisingly, Sofia is the military plain's buff heaven, as the Military Museum exhibits arguably the best public collection of aircrafts in the country. 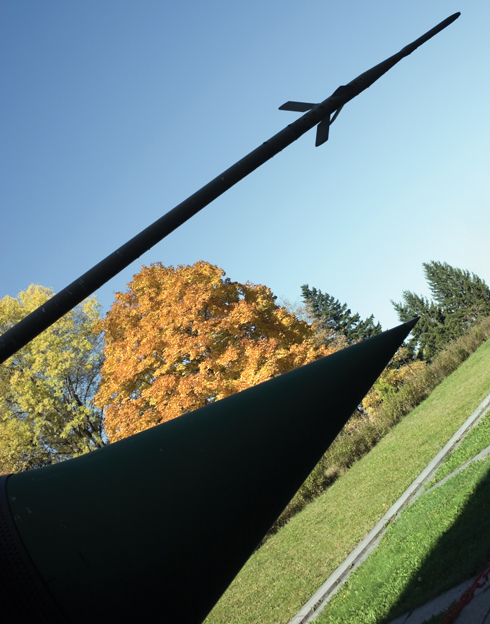 If you are looking for a true legend of Bulgarian aviation, however, go to Aviatsionen Square. On it, there is a replica of a Laz-7 bomber. It was designed for the Bulgarian airforce in late 1940's by a Bulgarian, German-educated engineer Tsvetan Lazarov, as part of the Swallow Project. The two-seater bomber was introduced in 1949 and was used for training and night flights and was assembled in the the State Airplane Factory in Lovech. Until its closure in 1954, 313 Lazs were produced in it. The actual Laz-7, however, cannot be seen, it is in the hanger of the Bulgarian Airforce in Sofia.