Adventure turns into one of greatest discoveries of recent years

The archaeologists who were finishing off the excavation of two small Thracian burial mounds on the spot where the future Trakiya Motorway would bypass the village of Aleksandrovo, near Haskovo, felt that day was different from the very beginning. 17 December 2000 was the last day of the excavations and brought the first bright sun after a long and depressing series of mists so thick that visibility was often less than 10 metres.

Dr Georgi Kitov (1943-2008), the head of the team, did not have much work to do on the site. The survey was over and the rest of the team were busy with the final clean up, so he got into his car and headed to nearby Dimitrovgrad. On his return to Aleksandrovo he glimpsed something unusual in the near distance.

About two kilometres from the road the mound of Roshava Chuka, or Bushy Rock Peak, stood out among the low hills. Kitov was familiar with it. Roshava Chuka was much bigger than the mounds he had just excavated, at 15 metres high and 70 metres in diameter. Partly overgrown with scrub and trees it was close to Aleksandrovo, but far from the future motorway (yet to be built in 2012). It was unexplored.

Despite the distance, in the clear winter air, Kitov spotted two gaping holes on the surface of the mound. Someone had been digging at Roshava Chuka, and he was obviously not an archaeologist.

An hour or so later, Kitov and three members of his team arrived at Roshava Chuka, to inspect what was visibly illegal excavations. The first one was short and ended in a stone wall. The second was longer and led to a four-metre shaft. The shaft led to a stone slab covering the corridor of the tomb which was obviously under the mound. The stone was broken. Inside, there was darkness.

Kitov hesitated. Bulgarian archaeologists can only excavate sites approved by a special commission at the Archaeological Institute. These permissions, called otkrit list, are issued every year and include descriptions of the excavation methods to be employed and the sites that will be surveyed. In this case, Kitov had otkrit list for the two little mounds only. On top of that, he had already violated the rules. That very year, while excavating the Starosel Tomb, one of his greatest discoveries, Kitov has dug into three mounds more than his permit allowed. As with Roshava Chuka, his reason for taking the risk was the fresh traces of treasure hunters.

At Aleksandrovo, after some consideration, Kitov did precisely the same. He climbed down the shaft and squeezed through the narrow hole into the passageway, which led him to an antechamber. The antechamber opened to a dark, round space, filled with rubble.

Bent double in the low entrance, Kitov stepped over the remains of the stone double doors and entered. It was only then that he realised that this 17 December was indeed a red- letter day.

Frescoes of a kind never seen before covered the walls. Men on foot and on horseback, chasing and killing deer and wild boar, appeared from the gloom. Kitov had just discovered the second frescoed Thracian tomb in Bulgaria, after that in Kazanlak.

Excavations in 2003 led to further discoveries. The tomb was built of stone blocks of regular shape, and its corridor was 15 metres long, one of the longest ever found in Bulgaria. The antechamber had also been painted, and its walls portrayed badly preserved but still enchanting figures of horsemen and dancers. The chamber, about three metres high and three in diameter, had a stone couch and a second frieze. Below the hunters there was a dining scene but, sadly, it was in very bad condition.

The tomb dated from the second half of the 4th Century BC, and had long since been plundered. The doors and the couch were smashed to pieces, and found in the corridor was a pick and a brass military decoration with a lion. The pick was from Antiquity, but the decoration was quite new. It turned out to be part of a Bulgarian army uniform from the 1930s-1940s. Its presence shed new light on local rumours, heard by Kitov, that some time before several people had entered a peculiar "room with drawings" near Aleksandrovo. 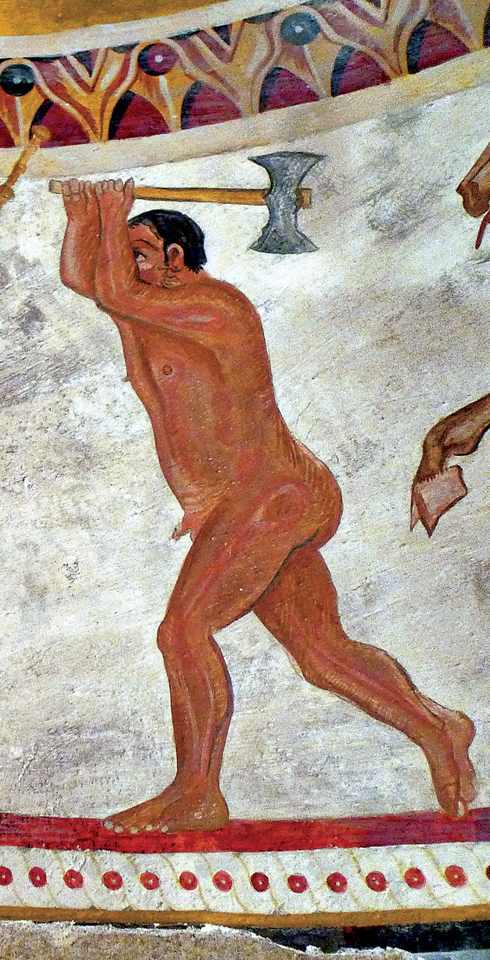 When the survey ended, the frescoes were restored and preserved. Their condition, however, was extremely vulnerable, so the tomb was sealed. The general public got the chance to experience, at least partially, the charm of the murals in 2009, when a Japanese government-sponsored informational centre opened at Roshava Chuka. Officially called the Museum Centre for Thracian Art (open between May and October from 9 am to 5 pm, except Mondays), it contains photographs of prehistoric shrines and Thracian monuments from the area, plus a life-size model of the Aleksandrovo Tomb and the frescoes.

In 2012, the Bulgarian government announced the start of a campaign for the inclusion of the Aleksandrovo Tomb on the UNESCO world heritage list.

The historic and artistic value of the tomb and its murals are beyond question. It is believed to have been built for a Thracian aristocrat or even a king; in any case a wealthy member of the ruling class of this ancient nation which is thought to have peopled the Balkans since at least the 2nd Millennium BC. The fashion for richly decorated tombs appeared among powerful Thracians about the 5th Century BC and lasted until Christianity prevailed in the 4th Century AD. The origin of the tombs are obscure, but experts believe that the Thracians started depicting people, animals and deities about the same time as the Greeks, under their influence.

This is why many Thracian treasures, statuettes, reliefs and murals depict scenes from Thracian culture, but were clearly made by dextrous Greek craftsmen. Two of the most prominent examples are from the Panagyurishte Treasure and the Kazanlak Tomb, both showing elegant, idealised mortals and deities.

There are, however, treasures that were obviously made by the Thracians themselves – the vessels from the Rogozen Treasure or the horse harnesses of Letnitsa are some of the most obvious examples.

he Aleksandrovo Tomb, though, is the first painted by a genuine Thracian, with none of the refined proportions and the idealisation typical of Hellenistic art. The people and animals of Aleksandrovo are solid and heavy, and the accuracy of the details depicted is stunning. The horse harnesses on the frescoes were used for the reconstruction of real harnesses found in Thracian graves. The artist did not even shy away from depicting the mythical ancestor of the deceased as a rather overweight and elderly gentleman.

We may even know the name and the face of the painter. In the chamber, above the dining scene, there is a small but clearly visible profile of a young man, scratched on the surface, together with the words ΚΟΞΙΜΑСΗС ΧΡΗСТОС. One of Bulgaria's leading epigraphists translated it as Kodzimases the Master, giving strong support to the hypothesis that it might be the first self-portrait in ancient art. 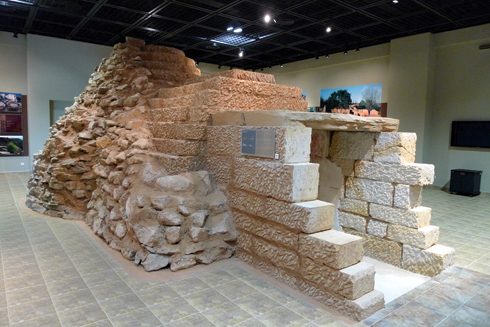 The most striking aspect of the murals, however, is their meaning. Why are the four riders chasing deer and boar? Why is the overweight, elderly gentleman running naked after a boar and waving a double axe above his head? What do the dancers and the diners represent? The answers are the result of guesswork. According to the most accepted explanation, the dining and hunting scenes show the bliss that awaits the deceased in the afterlife. Thracian aristocrats were followers of a peculiar doctrine, now called Thracian Orphism. It was a mystical religion that kept its secrets from outsiders, although it is known that its initiates believed that they became semi-gods after death.

Kitov's theory, in which he firmly believed, was that dead Thracian kings and aristocrats were deified and their tombs were turned into temples. Despite the claustrophobic dimensions of the tombs – or maybe precisely because of them – the living initiates would return and participate in rituals we may never be able to reconstruct.

Dr Kitov was positive that the Aleksandrovo Tomb was full of evidence to support his theory. The stone couch had cushions at the two sides, like the beds used for dining in Antiquity, and among the rubble in the antechamber there were fragments of something like a table. The stone doors could only be locked from the inside. All these details, Dr Kitov speculated, showed that feasts held exclusively for initiates took place in the tomb. However, it was harder to explain why the doors were broken from the inside and where and how the pick found in the corridor fits into the picture.

The tomb, as with everything connected to the Thracians, who did not bother to write down their deeds and left all that work to the "prejudiced" Greeks, is full of secrets and unexplained details. 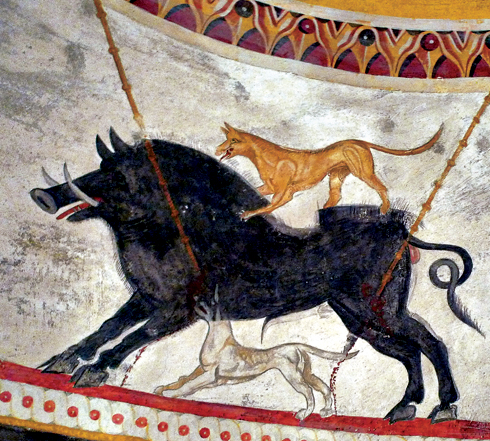 One of the most surprising mysteries of the Aleksandrovo Tomb, however, is the story of its discovery by Kitov.

When the dazed archaeologist left the tomb, he called the Archaeological Institute in Sofia, some colleagues and the media. The reporters seized the news, but the commission at the institute was far from happy. Kitov had overstepped his authority and the excavations did not look as if they had been recently made by treasure hunters. By entering the tomb and photographing the murals he had put the frescoes at risk and might had disturbed the layers of evidence inside.

The archaeologist was banned from fieldwork for one year and lost his copyright on any information concerning the Aleksandrovo Tomb. He returned and finished the research only in 2003. Then he spent the rest of his life in open warfare with his colleagues from the commission. He denounced them as petty bureaucrats who cared more for the rules than the actual heritage, and claimed that his "illegal" work had saved the murals from being stolen, cut to pieces and sold to collectors in Bulgaria and abroad. Kitov's opponents criticised his gung-ho approach to fragile artefacts, structures and cultural layers. Rumours appeared as well, according to which Kitov (or locals hired by him) had dug the trenches and made up the whole story of that peculiarly clear and sunny 17 December 2000 to back up his version of how the Aleksandrovo Tomb was discovered.

Who was right and who was wrong will probably never emerge. Dr Kitov, however, won in the long run. His spectacular discoveries turned him into one of the superstars of Bulgarian archaeology. The judgement is still out on the place of the Alexandrovo Tomb on UNESCO's world heritage list.