If you are looking for a place in Bulgaria that combines nature, architecture and spirituality, Demir Baba's tekke will be among your top choices.

The saint's stone tekke, or shrine, lies at the foot of the cliffs of Kamenen Rid. Dense woods rustle around Demir Baba's tomb, an object so exquisite that from afar it looks like a toy that you could hold in your hand.

Demir Baba's tekke is one of the 140 cultural heritage sites in the Sboryanovo Archaeological Reserve, near Isperih. The tomb stands out from all of them – including the Thracian necropolis featuring Caryatids (an UNESCO heritage site) for one reason: it is the only monument in the area that has been used for the same purpose continuously since it was built in the 16th Century. 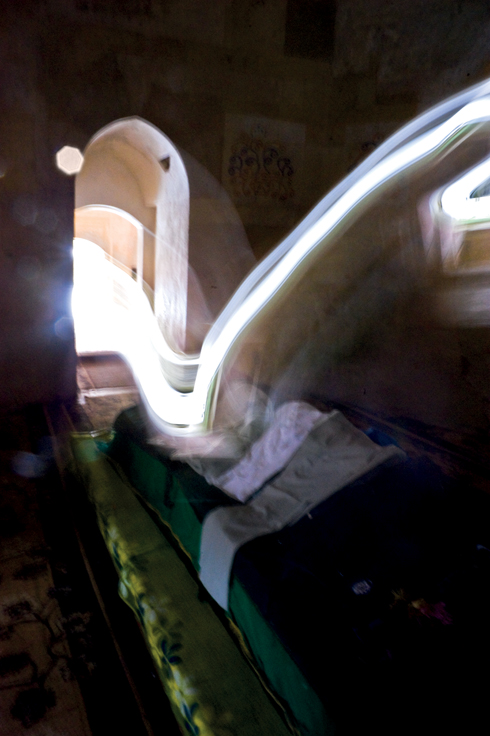 Demir Baba’s grave. The saint’s tombstone is nearly 4 metres long and is covered with gifts from grateful visitors

Demir Baba, or the "Iron Father," who is buried here, is the most honoured saint of a small and little known group of Muslims in Bulgaria – the Alevis.

Some 70,000 Alevis live in Bulgaria now in compact groups in villages in the Dobrudzha region, the Ludogorie and the eastern Rhodope. They are followers of an unorthodox and rather liberal version of Shiite Islam. Drinking alcohol is not forbidden and women do not cover their heads. They hold common rituals away from the eyes of the uninitiated. Alevis consider Imam Ali, the "True Heir of Mohammed," and believe in the 12 Imams, his infallible followers.

Alevism is esoteric and full of symbols incomprehensible to those unfamiliar with it. What is known is that the figure seven, the number "12" and the rose are sacred. That is why the tombs of Alive saints are heptagon-shaped and the turbans depicted on men's tombstones have seven wraps.

Orthodox Islam forbids the veneration of tombs and cemeteries. For Alevis, however, the tombs of saints are sacred places where people come to pray for health, for fertility or to seek divine help.

Alevis believe that all religions are equal and contain truth. This explains the many borrowings in their rites – for example, the lighting of candles. 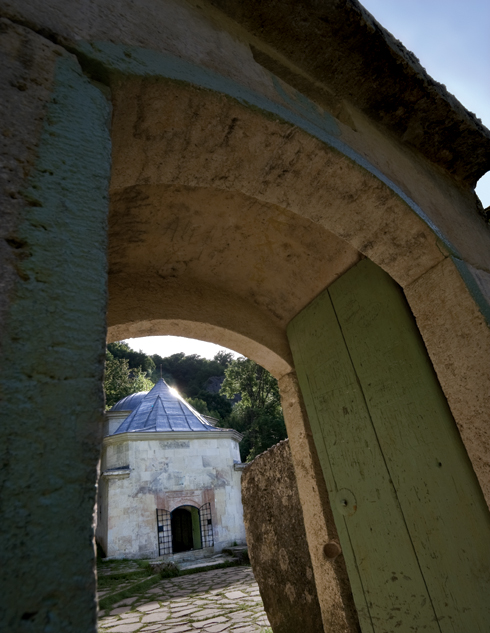 The türbe is 11 metres high. According to locals, until the 1920s there was an iron cross and a crescent on its top. A local official had the cross removed, as he considered its presence on a Muslim sanctuary an insult to Christianity

The story of the Alevis' arrival in the Balkans contains many blank spots, hypotheses and legends. According to the most popular version, Alevis used to live on the border between the Shiite Iran and the Sunni Ottoman Empire. The two states were in conflict, so the sultans Bayezid II (1481-1512), Selim I (1512-1520) and Suleyman I (1520-1566) forced Alevis to move to depopulated areas in the Balkans.

At times the Ottoman state persecuted Alevis. Alevi saints and sages, however, had a special status. Officially they belonged to the monastic order of the Bektashis, who – somewhat confusingly – were Sunnis. Thus, saints such as Demir Baba, Osman Baba and Ak Yazılı Baba, who are still venerated in Bulgaria, were honoured by Sunnis, their deeds being described in legendary biographies and their tekkes visited by pilgrims. 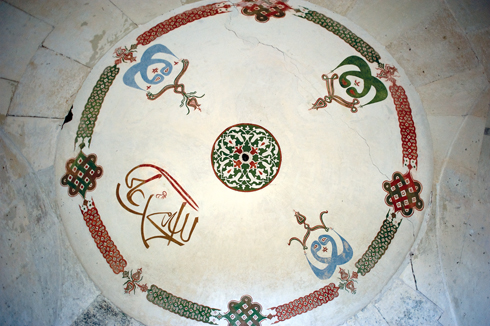 The decorations inside the türbe were restored in the 1990s

Demir Baba was no exception. The legend says that he was a contemporary of Süleyman I. His birth had been predicted by the saint Ak Yazılı Baba, whose tekke is in the village of Obrochishte, near Varna. Demir Baba was still young when he showed signs of the great saint he would become. Prior to founding a tekke he travelled around the world and distinguished himself as a brave warrior and a skilled horseman. Demir Baba killed two dragons that were terrorising the lands of the Tatars and the Muscovites, and helped the sultan seize control of Budapest.

He then returned to his native village, founded the tekke, gathered disciples and started to preach and help people. One of the eloquent testimonies to Demir Baba's powers is still in his tekke. This is the karst spring called Başparmak. According to the legend, during an unprecedented drought people prayed to the saint for help. He put his hand into the rock and water spurted out.

Başparmak has not been piped yet because the local people believe it is sacred. A ritual is still observed requiring those entering the tekke to take three sips from it and wash their faces.

Demir Baba's turbe, or tomb, and the old house at the entrance of the complex are the only surviving structures of the large religious complex that used to surround the tomb. Belief in the saint's powers, however, is still strong and attracts Alevis, Sunnis and Christians alike. The largest number of visitors gather on 6 May, the holiday celebrated as Hıdırellez by Muslims and St George's Day by Christians.

The tekke is full of pointers to the mix of religious traditions and even superstitions. The saint's grave is covered with dozens of towels, shirts and socks, left there as gifts for prayers that were answered. The trees in the surrounding area and even the window bars of the turbe are decorated with colourful shreds of cloth, tied there by people who believed this would bring them health.

The stones in one of the walls of the complex are decorated with mysterious carvings. Seven-pointed stars can be seen on some of them. Hexagrams, which are known in mystical teachings as the Seal of Solomon, are depicted on others. 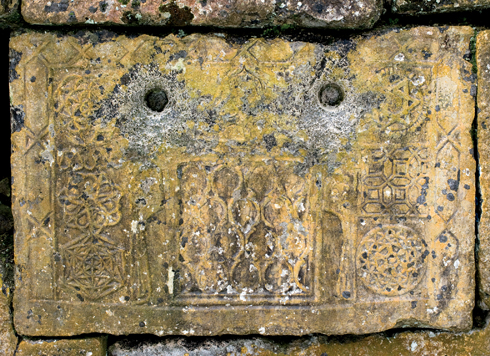 Several blocks bear domed buildings, one of which is certainly a mosque with a minaret. One of the stones in the wall attracts small groups of visitors who, with eyes shut and arms outstretched, try to find it and poke their fingers into two holes known the Witch's Eyes.

Demir Baba tekke had been a sacred site long before the arrival of the Alevis. Archaeological excavations have not been able to find proof to corroborate local legends of a Christian monastery dedicated to St George beneath the tekke. However, archaeologists have discovered that a Thracian sanctuary existed there between the 4th Century BC and the 2nd Century AD. The turbe was built literally on top of its remains and some of the stones of the pagan sanctuary have been incorporated into the walls of the Alevi shrine.

The most eloquent example is the huge stone block along one of the turbe walls. Two thousand years ago the Thracians offered sacrifices on it. Those who believe in Demir Baba's powers, however, lie on it in the hope that it will bring them health.