Past and present mingle enticingly in sunny mountain town

The town is small now, but it used to be a centre of the Bulgarian Revival period. It was called the "Bulgarian Bethlehem," as it boasted three churches at a time when most towns and villages had either one, or none. As you enter it through the winding roads of the Stara Planina, the trees and bushes all around are arrayed in spring green.

St Nikola church was built in the 16 Century and was destroyed in 1800 when a band of kardzhalii, or brigands, set Elena on fi re. It was restored in 1804

Elena is a town with many stories, and you would be hard-pressed to pick out the most interesting one. The legend concerning the founding of the settlement is one of the best known. It tells the story of two lovers, Elena and Samuil, who were to be wed in the mountain forests. The ceremony, however, was attacked by brigands, who tried to abduct Elena. She refused to go with them, and was slain and buried in what would later become a churchyard. Out of grief, her parents moved to live on this spot and gave the new town her name.

You can easily visualise the idyllic and peaceful surroundings of Elena as the perfect spot for a wedding ceremony. The town is only 38 km to the southeast of Veliko Tarnovo, but it is nestled in the folds of the Balkan Mountain, which lends a certain remoteness to the area. If you choose it as a getaway, there is plenty to occupy you. In its nearly 600 years of existence, Elena has accumulated many landmarks.

One of them is St Nikola's church, atop a low hill. For several centuries it was the only church in town, and it doubled as a book depository, housing a 16th Century tome of Psalms printed in Venice as well as many parchment manuscripts. A special priest handled the books, which were considered a treasure. So it was a tragedy when, after a brigand attack in 1800, the church was burned down, together with most of the books. For the Bulgarians of the time a church was not only a mark of faith, but also the key element of a community – and a way of expressing defiance against the Ottoman rule, which forbade the building of churches without permission from the sultan. 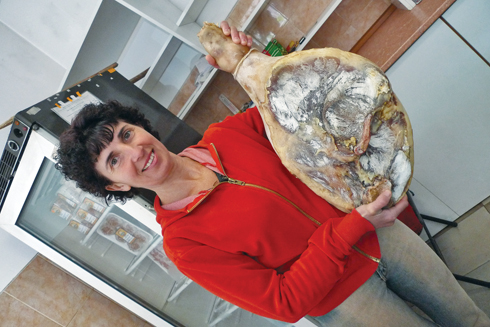 Tasting the famous Elena ham is a must

The citizens of Elena, who included well-to-do traders and artisans, started reconstructing the church in secret, building it into the ground to conceal its true size. This, however, was not enough to stave off a visit by the Ottoman governor of the Tarnovo region. In a desperate bid, the builders coated the walls of the church in lime mixed with coal dust to make it look old. Their leader met the Ottoman delegation politely and told them that the workers were simply repairing an old sheep shed. Th e 30 gold coins that he gave to each of the delegates and the invented story helped the church survive to the present day.

The stubborn and rebellious nature of the locals carried over into the part that Elena played in the Bulgarian Revival. As you stroll among the old-style houses in the centre, you inevitably come upon the Daskalolivnitsata – literally, the place for moulding daskali, or teachers. This was the site of the fi rst Bulgarian secular school, founded in 1843 by Odessa-educated Ivan Momchilov. Striving to create a school that copied the Russian model, he separated students by age and level of knowledge, and composed an ambitious curriculum that covered history, religion, geography, mathematics, physics, Greek, Russian and Old Slavonic. Pupils came from all over Bulgaria – and later on returned to their villages and towns, numbering more than 100, to teach in their turn.

Nowadays, the historical echoes of former glories underpin the spirit of the town, as Elena lies sleepy under the warm spring sun. Or so it seems – until the time comes for the festivities. On the 1 May, the traditional gathering on one of the biggest meadows with concerts, horo and curious visitors kicks off the season of celebrations. This continues with the town holiday on 21 May, the marking of the day of Slavic culture on 24 May and the July celebration of the Elena region. On days like these, it is diffi cult to recognise the previously drowsy provincial town. If you have had enough of the din and bustle, you can always escape to the gorgeous green forests that surround Elena. The beauty and peacefulness of the leafy canopy feels like balm to the soul. There, legends still abound – from the enormous boulder that was supposedly thrown here by Bulgarian folk hero Krali Marko, to the old tree called Slona, or Elephant, which is thought to be 1,300 years old. In Elena, there is simply no escaping the stories.