TWO FOR THE PRICE OF ONE

by Minka Vazkresenska; photography by BTA
Rate this item
(0 votes)

When the tide of expats flowed into Bulgaria about ten years ago, the newcomers discovered that they weren't the first foreigner to arrive, settle down and feel comfortable in the country following the collapse of Communism. At that time, Eastern Orthodox Bulgaria had already welcomed another vagabond; St Valentine, the Roman Catholic patron saint of romantic love. It was not a big deal, in fact, as all around the world, regardless of their religion, people celebrate their love with chocolates, red satin hearts and teddy bears.

What still surprises newcomers to Bulgaria, however, is that here 14 February has long been the day of another, much loved saint. St Trifon Zarezan, the patron saint of wine and vines, is famous for having offended the Virgin Mary and for his missing nose. Bulgarians, however, revere him greatly.

This is why Bulgaria displays a split personality on 14 February. Young Bulgarians eagerly indulge in the rituals of the Western St Valentine's Day, boosting sales of red roses and red lingerie all over the country. The older generation and patriots of all ages stick to St Trifon Zarezan. Many, however, choose to celebrate both saints, giving roses to their girlfriends and then taking them out for a binge with friends in a local pizzeria.

Some historians believe that celebrating both saints is an echo of older festivities for the coming of spring and the renewal of life. No matter what the truth is, St Valentine and St Trifon Zarezan are very different from each other.

He is the patron saint of wine, vines and winemakers, gardeners, falconers and bar keepers. His zone of influence is Bulgaria and his official feast day varies. According to the Julian calendar, which the Bulgarian Eastern Orthodox church confusingly calls the "new style," St Trifon's feast is on 1 February. However, most Bulgarians celebrate on 14 February, according to the Gregorian calendar.

The genuine martyr St Tryphon of Thyria (225-256) was only 17 when the news of his healing powers reached Rome and Emperor Gordian III (238-244) himself summoned him to cure the mental affliction of his daughter. St Tryphon succeeded and many members of the imperial court converted to Christianity, convinced by the power of the new religion. After Gordian's death the persecution of Christians started again and Tryphon become a martyr for his refusal to give up his faith. 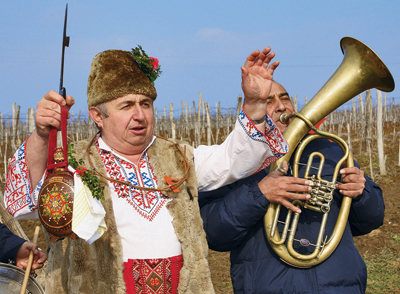 Bulgarians, however, tell a different story. Trifon, an ill-mannered and foul-mouthed man, was the brother of the Virgin Mary. One day, while he was pruning his vines, he saw his pregnant sister passing by and couldn't resist the opportunity to tease her about her miraculous conception. Enraged, the Virgin Mary rushed to his house and told his wife: "Hurry! Hurry to the vineyard as Trifon has cut his nose off!" The woman ran to the vineyard, only to find Trifon alive and well, pruning the vines. "Your sister told me that you had cut your nose off," said she, still disturbed. Trifon laughed at her: "Stupid woman! Don't you see that my nose is right here on my face?" He pointed to it with his pruning shears and unwittingly cut off his nose.

Since then, he has been known as Zarezan, the Cut One.

Historians believe that Trifon Zarezan is a slightly Christianised Thracian god. Like Greek Dionysus, he was responsible for wine, ritual madness and the underworld. Some, under a strong Freudian influence, have interpreted the nose cutting scene as reminiscent of ancient rituals of castration and/or human sacrifice.

In the old days men would go together to the vineyards and crown one of the company with vines as a king. They would ritually cut some of the vines and pour wine on their roots and then they would go to the home of the king, chasing any women they met on the way, and would get drunk. For the next two days women would not cut anything, believing that St Trifon would send wolves into their village if they broke the taboo.

Today Bulgarians of both sexes get drunk, not necessarily on wine.

When Bulgarians say da zarezhem, or let's do some cutting, they really mean let's get drunk.

"Trifon Zarezan" is one of the greatest hits of Veselin Marinov, the pop singer whose fan base consists mostly of elderly women and Interior Minister Tsvetan Tsvetanov.

St Valentine He is the patron saint of romantic love.

This is obscure. What is known for certain is that St Valentine was born on 14 April and was buried at Via Flaminia in Rome on 14 February, but it is not known in which years. His name is not included in the Chronography of 354, the illuminated calendar made for a wealthy Roman Christian whose name, ironically, was Valentinus.

The lack of proven facts did not prevent the Basilica of Santa Maria in Cosmedin, in Rome, from exhibiting the skull of St Valentine. Since the 1830s, with the approval of the Vatican, the Carmelite Church in Aungier Street, Dublin has claimed to have the saint's relics, found in the catacomb of St Hippolytus in Rome. 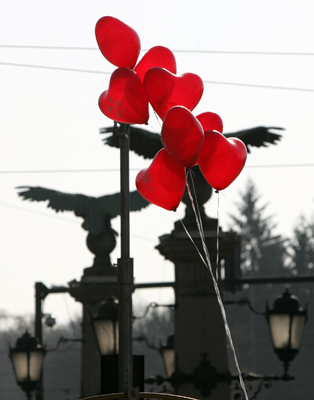 For Gelasius, St Valentine was one of those "...whose names are justly reverenced among men, but whose acts are known only to God." In the Middle Ages, however, the name of St Valentine became more widely known and in the 12th Century there were already two churches in Rome bearing this name. Confusingly, one was dedicated to a certain bishop of Termi and the other to a priest in Rome.

The details about St Valentine's deeds first appeared in literature centuries after his lifetime.

According to the compilation Legenda Aurea, which dates from the 1260s, the saint was executed around 280, but before his death he cured the blind and deaf daughter of his prison guard. More than 200 years later, in the Nuremberg Chronicle of 1493, the saint is described as a priest in Rome, who was clubbed, stoned and beheaded on the orders of Emperor Claudius II (268-270) for conducting marriage ceremonies for soldiers, a practice that was then strictly forbidden in the Roman army.

The story that the saint received a Valentine card from his guard's daughter while in prison is clearly an invention of the Internet era.

A strong suspicion exists that St Valentine is not a single person, but an amalgam of several early Christian martyrs with the same name. This theory is plausible, given that the names Valentine and Valentina were very popular at the time.

How St Valentine became the patron saint of lovers is still a mystery. None of the canonical texts ever mentions this, and the first mention of St Valentine's Day as a celebration of romantic relationships appears at the end of the 14th Century, in Chaucer's poem "Parlement of Foules."

The first Valentine as we know it appeared several years later. It was sent to his wife by Charles d'Orléans, who was imprisoned in the Tower of London after the Battle of Agincourt in 1415. Over the following centuries the practice spread. In 1797, a helpful compilation of love verses The Young Man's Valentine Write was printed in Britain, and by the middle of the 19th Century both Britain and the United States were mass producing printed Valentines that flooded the markets and the hearts of millions of people.

The exchange of real or virtual Valentine cards, decorations and balloons in the shape of red hearts, and romantic dinners are de rigueur. Recently, an ironical answer to St Valentine's Day hysteria appeared. The SAD, or Singles Awareness Day, is dedicated to those not in a relationship. It is marked on 13, 14 or 15 February and the main colour is green as opposed to St Valentine's reds and pinks.

You name it – from Hamlet to Al Capone's Valentine's night massacre in Chicago in 1929 to the jazz classic "My Funny Valentine."