Shivering in the biting cold of the Boyana Church, you look at the 13th Century portrait of Desislava and you wonder if this image, painted 100 years before Giotto revolutionised medieval art, is truly the earliest Renaissance portrait in the world, or has Desislava (and the tourists around you) fallen victim of hype?

The churches from the 19th, 13th and 10th centuries (from left to right) are glued together and form one entity known as the Boyana Church. The staircase leads to a chapel built by Sebastocrator Kaloyan. The cross marks the grave of Queen Eleonore

It's difficult to know, especially when your only source of information is the elderly gentleman who's been in charge of the Boyana Church for many years and without whom entering it is prohibited. He is there not only to prevent you from taking pictures inside this UNESCO World Heritage monument, but he persistently and with great aplomb tries to convince you that the European Renaissance started here, near Sofia, in the 13th Century, when an unknown master painted these amazingly realistic portraits of Desislava, her husband Sebastocrator Kaloyan, a charming young Jesus and so on and so fourth.

However, there is hardly a state in the Balkans that doesn't claim to possess medieval murals with astonishingly non-medieval features, predating the Italian Renaissance by at least a century. The so-called White Angel from the church of Mileševa Monastery in Serbia is one of the most famous examples. Others are the striking mosaics in the Chora Museum in Istanbul.

All of them, actually, are the product of the so-called Palaiologos Renaissance. This art movement appeared and flourished in the 13 and 14th centuries in Byzantium, and neighbouring states such as Bulgaria and Serbia, and even Russia. The artists of the period really did break free of some of the restraints of established medieval art, and when looking at murals or mosaics from that period you often stumble upon images of church patrons, saints and even Christ that look incredibly realistic.

The movement, however, never produced anything on par with the art of the Italian Renaissance. Whatever the truth, the Palaiologos Renaissance ended during the turbulent internecine wars between the Balkan states that paved the way for the Ottoman conquest of the peninsula in the 14 and 15th centuries. What is beyond any doubt, however, is that the 13th Century murals in Boyana Church are a striking example of Palaiologos Renaissance art, the best preserved in Bulgaria. They appeared during the second phase of the long and somewhat complicated history of the church.

The first church on this site was built at the end of the 10th or the beginning of the 11th Century: a humble domed structure of brick and mortar that still exists today. It is at the far end of your tour inside Boyana Church, and after restoration some of its murals can still be seen. In the 13th Century Sebastocrator Kaloyan, a member of the Bulgarian royal family and lord of Sredets, present-day Sofia, enlarged and repainted the church. Kaloyan lived with his family in a palace in the city and, like some of the present day nouveau riches, had a summer residence in the village of Boyana, at the foot of Vitosha mountain.

Why Kaloyan decided not only to enlarge the little church, but also to turn it into a family tomb is a mystery. A new brick and stone structure with two storeys was added to the older edifice. The upper floor served as a church, dedicated to St Panteleymon, and the ground floor was used as a sepulchre. According to a building inscription, the work ended in 1259. Ironically, very few of the murals on the upper storey have survived. The murals on the ground level, however, are almost intact. There are the famous depictions of Kaloyan and Desislava, and the portraits of the incumbent royal couple, King Konstantin Asen (1257-1277) and Queen Irina. Centuries came and went and Kaloyan was largely forgotten, although even during the 500 years of Ottoman rule the place where his Sofia residence stood was still known as the Kaloyan mahala, or neighbourhood. Today's Kaloyan Street still runs there. 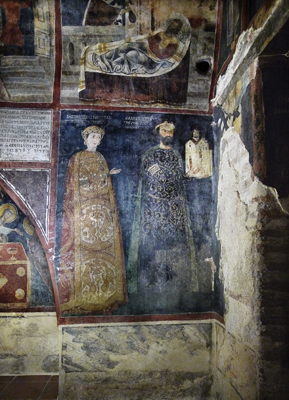 Portraits of Kaloyan and Desislava

In the 17th Century the murals in Boyana Church were painted over, and two centuries later the building was enlarged again, creating what is now used as the entrance.

In 1854 a stranger entered the church. He was Viktor Grigorovich (1815- 1876), a Russian philologist on the hunt for antiquities. Grigorovich left Bulgaria with about 60 valuable manuscripts from the 11 to the 18th centuries, and he didn't leave the Boyana Church empty-handed as he found there two important medieval documents. It seems that his interest in the building didn't impress the local people much. Cramped and claustrophobic, blackened by the flames of innumerable candles, the church at the beginning of the 20th Century was deemed too uncomfortable for the congregation, so the villagers decided to tear it down and build a new one in its place. 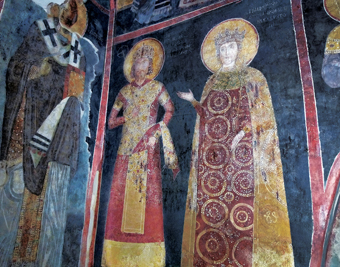 Luckily, this never happened due to the influence of a one woman, Queen Eleonore (1860- 1917), second wife of King Ferdinand I (1887-1918). Eleonore von Reuss-Köstritz married the widowed Bulgarian king in 1908 and immediately initiated largescale charitable activities, which included building children's hospitals and working as a nurse for the Red Cross on the frontlines during the Balkan wars and the Great War. When the queen learned of the danger to the church in Boyana, she persuaded her husband to give the villagers another plot of land for their new church. This happened in 1912, and the old building was saved. In the same year the first restoration of its precious murals began. The conditions inside the church, however, were so bad that the frescoes had to be restored again in 1934 and in 1944, and in 1977 the building was closed to visitors. It joined the prestigious UNESCO list in 1979, but restoration lasted well into the 2000s.

Today you can visit it in small groups for a limited time, and under the supervision of the eagle-eyed guide.

Interestingly, neither he nor the official web site of the church are eager to tell you how Queen Eleonore saved the church, and they do not mention that she is still there, buried in the churchyard.

The number of people inside the church and their stay are limited due to conservation issues. Two layers of medieval frescoes are preserved – from the 10th and the 13th centuries

The queen died at the royal residence of Evksinograd, near Varna, in 1917. Her last wish, however, was to be buried by the south façade of Boyana Church and Ferdinand duly obliged. The king also ordered a grove of exotic trees, including sequoias, to be planted around the church, and most of them are still there, creaking and whispering in the mountain wind.

In the first decades after Eleonore's death her grave became the object of a kind of pilgrimage. Nurses trained by her and soldiers healed by her used to gather there to pay their respects. The tradition died out when Communism came in 1944, but in the 1960s worse was to come. The queen's grave was opened, her coffin and her body were taken away and plain stone slabs were placed where the elaborate tombstone had once stood. The remains of Eleonore were reburied at Boyana Church after 1989 but although restored, her grave is unkempt.

WHO WAS THE BOYANA MASTER?

The identity of the so-called Boyana Master is still a mystery, but this is not so strange. In the Middle Ages, every piece of art was attributed to divine inspiration; architects and painters were regarded as simple instruments of the divine will. Consequently, they rarely inscribed their names on the walls of the churches they had built and painted.

Not surprisingly, the identity of the Boyana Master has fascinated many over the years and there are several works of art dedicated to him. The most seminal are The Boyana Master, an opera by Konstantin Iliev from 1962, and the film of the same name from 1981.

Historians are also eager to discover at least the name of the artist. According to the most popular theory, he was called Vasiliy the Painter. This name cropped up in a long medieval list of Bulgarian kings, queens and clerics who should be blessed during mass in Boyana Church. This list was in one of the documents that Grigorovich found and took to Russia.

In 2008 a team of restoration workers uncovered a hidden sketch of a male face and the remains of an inscription that read "I, V....an". Bozhidar Dimitrov, head of the National History Museum, interpreted the discovery as the self-portrait and signature of Vasiliy the Painter.

Many other historians, however, vehemently disagree.

There is another detail that makes identifying the painter problematic. It is very likely that the church was painted by a team of artists, and one of the few established facts about them is that they came from Tarnovo, the capital of medieval Bulgaria.