The city is beautiful at any time of the year, but it surpases itself in the autumn

The gentle sun caresses the skin, its beams turning the foliage on the trees into explosions of red, yellow and orange, and the multicoloured Revival Period houses in the city's old quarter look so cheerful that you forget about the cobblestones that are so difficult to walk on. Plovdiv is beautiful 365 days a year, but in autumn it becomes a true pleasure that you would be silly to deny yourself. The mellow autumn weather and the relatively few tourist are only a fraction of the reasons for thinking about an autumn trip to Bulgaria's second-largest city. Situated on one of the oldest routes through the Balkans, Plovdiv is the successor of a string of settlements, large and small. The first appeared about 8,000 years ago, and since then people have lived continuously on and between the seven hills beside the Maritsa river. The only thing that changed was the name. In antiquity it was called Philippopolis, and for the Bulgarians in the Middle Ages it was Paldin, while the Ottomans called it Filibe. A motley collection of Bulgarians, Greeks, Turks, Armenians and Jews have always made up the population, which makes Plovdiv perhaps Bulgaria's most cosmopolitan city. The accumulation of thousands of years of history has produced, in one place, a collection of antique ruins, picturesque Revival Period houses, mosques and churches which today attract thousands of visitors.

The city has one of the best collections of antique ruins in Bulgaria. The 2nd Century Roman stadium, which held 30,000 spectators, is currently inaccessible due to restoration works, but the ancient theatre is yours to explore. Nestled between two of the hills that make up the core of Old Plovdiv, the theatre offers spectacular views across the city to the Rhodope mountains in the distance. Near the main pedestrian street part of the former city centre is visible. For mosaics, head to the so-called Eirene Building. Discovered in the 1980s this 3rd Century building has been restored and can now be seen in an art gallery, in the Archaeological Underpass. The revamped Archaeological Museum is another place worth a visit, if you are interested in Plovdiv's ancient past. However, the exhibit that inevitably steals the show is the marvellous 4th Century Thracian Panagyurishte Treasure, on loan from the National History Museum in Sofia.

Several kilometres away from the centre, on Komatevsko Shausse Street, rise the immense pillars of the Roman aqueduct. Most of the structure is a later reconstruction, but the sight is still impressive.

Sadly, there is little left of medieval Plovdiv save from Hisar Kapiya, one of the gates of the fortress. Finding it in the maze of streets and alleys in Old Plovdiv is a rewarding experience in itself. The medieval structure is literally built into a 19th Century house, which is one of the most important monuments of Revival Period Plovdiv. Built in 1847 for the wealthy merchant Argir Kuyumdzhioglu, it now houses the Ethnographic Museum.

Others places of interest from this era are scattered all over the Trihalmie, or the Three Hills, the oldest continuously inhabited part of Plovdiv. Be sure to take in the Yellow School, the House of Georgi Mavridi, where French revolutionary poet Alphonse de Lamartine spent several days, and the quaint but still impressive interiors of the Balabanova House and the house of the Armenian merchant Stepan Hindliyan. 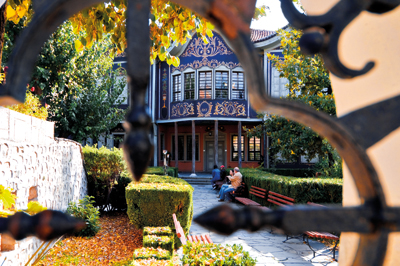 The Trihalmie is rich with places that will excite your curiosity, such as the home of Sotir Antoniadi, MD, who opened the first pharmacy in Plovdiv in 1870s. The pharmacy is preserved as a museum.

Some parts of the past are less visible. Between the 1360s and 1885, Filibe was a major Ottoman town, but few buildings remain from that period in modern-day Plovdiv. The Cuma Mosque in Dzumaya Square is the most famous, and every tourist is bound to pass by it as it is situated at the foot of Trihalmie, but there is more.

Near the Maritsa River stands the exquisite 15th Century Imaret Mosque. On top of Sahat Tepe hill one of the oldest clock towers in the Balkans still keeps time. The impressive Çifte Hamam is now a contemporary art gallery and the former 19th Century mevlevihane, or dervish complex welcomes visitors as one of the poshest restaurants in the city. 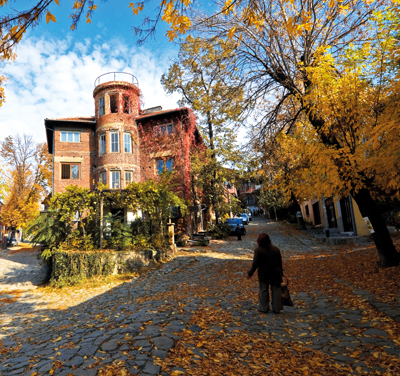 Cosmopolitan Plovdiv has more to offer, however. There is the Armenian church on Trihalmie, the Catholic St Ludwig Cathedral, the largest Protestant church in Bulgaria and the restored synagogue. Sadly, the oldest synagogue in Bulgaria, a 3rd Century building, cannot be visited, as soon after its discovery in the 1980s a block of flats was erected over its remains.

Plovdiv's extensive past has given rise not only to architectural treasures, but also to a long-standing urban culture that somehow grows more pleasant in the autumn. It is a mixture of the busy cultural life of the Autumn Salon of Arts, a genuine interest in good food, and the light, typically autumnal nostalgia for times long gone. Plovdiv has perhaps the best culinary scene in Bulgaria. This is not so much in the obvious variety, but rather in the responsible attitude towards food as such. Wherever you sit – in a highclass restaurant with starched tablecloths, in a traditional mehana in the city's tourist area or in an unpretentious diner in the outskirts – you can be sure that the salad will be fresh, the meat tasty and from a reputable supplier, and the bill won't be too much of a shock. Simply taking a stroll remains one of Plovdiv's greatest pleasures in the autumn.

Even when it's cold and raining, the city's old quarter is still charming – melancholic and quiet, a place you can amble around for hours before stopping at a cosy, bustling café for a cup of excellent espresso and a slice of freshly baked cake.