The longest day of the year is nearing its close. The sun is descending towards the horizon and, in accordance with the Law of Romantic Sunsets, the sky and the panorama of mountain peaks and plains are flushed with a couple of hundred shades of red and blue.

The expectant crowd gathered on the mountain peak in Sredna Gora circle around, talking among themselves.

The sun continues its descent and is suddenly hidden behind a large cliff. The people sense the change and grow quiet, their eyes riveted on the cliff.

This cliff, in fact, is worthy of a second look, even without the sunset. It stands on two other cliffs – erect and imposing. The three blocks of stone form an aperture through which the sky, the mountain and the plain can be seen. At this moment – sundown on 21 June – all eyes are directed towards it.

The people here have gathered to witness the sun doing what it does on no other day of the year: it passes directly behind the aperture.

A few dozen pairs of eyes squint in expectation. A minute later, the first rays of the sun shine through the opening. A sigh passes round the crowd. It seems that everyone who has come specially to witness the sunset through the Gate of the Goddess, a megalith above the village of Buzovgrad, doubted its reality to the last.

But the "miracle" is a fact, and the Gate of the Goddess confirms its dual glory of an ancient astronomical observatory and a shrine.

The mass of large stones above Buzovgrad resembles a natural cliff formation. Some believe, though, that it is a megalith that was erected in the early Bronze Age, probably between 1800 and 1600 BC. Like other cliff shrines from this period it was also in use throughout antiquity until the establishment of Christianity in the 4th Century AD.

According to the most widespread opinion, the Gate of the Goddess was built by the Thracians. In antiquity this ancient people used to live in the current-day Bulgarian lands and left behind many tombs and gold treasures, mainly from the 4th to 1st centuries BC. But when and how the Thracians arrived in the Balkans and why they disappeared in late antiquity, during the inroads of the so-called Barbarians, remains a matter for debate. The Thracians left no written history of their time, and most of the knowledge that historians have about them was gained from excavations of necropoli, settlements and shrines, as well as from the accounts of such tendentious witnesses as the Ancient Greeks. 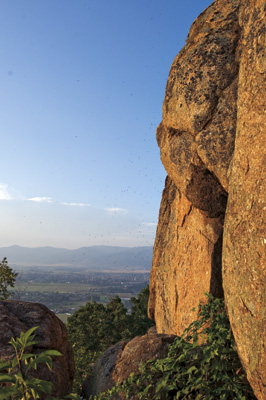 A further question remains about why the Thracians should have wanted to peek through the opening in a megalith above Buzovgrad precisely at the time of the sunset of the 21th day of June, and what they did when this scared moment arrived. Perhaps worshippers from far and wide convened to watch the event in god-fearing silence? Perhaps they used to sing sacred hymns? Maybe they offered sacrifices with wine and animal blood? It may also be that only a handful of initiated priests were allowed to see the sight.

The megalith of Buzovgrad is one of the most recent additions to the list of rock shrines in Bulgaria. This vogue set in and has grown to be a sort of mania in the last ten years or so. It has attracted a wide variety of people – from professional archaeologists and historians through to history aficionados and fans of esoteric knowledge, to ordinary tourists short on ideas about where to spend the weekend.

Perperikon and Tatul are among the most popular sites of "shrine" tourism in Bulgaria, and most Thracian sites are in the Rhodope, Sakar and the Strandzha. Most sites that have been declared Thracian rock shrines were indeed used for religious activities. The traces of ducts and libation basins can be seen on the rock surfaces, and when excavations begin the archaeologists usually discover pieces of ceramics, animal bones and other traces of ritual activities.

Typically, the ancient Thracians set up their shrines on rocky outcrops of unusual shape. It is this choice that makes the identification of the shrines difficult today. It is enough to simply succumb to the imagination and you start seeing shrines on every peak and close by every curious-looking rock. A string of extravagant theories have been born and gained popularity. Some of them claim that the Thracians carved enormous faces in the rocks. Others contend that the round holes that the Thracians drilled into the rocks to fasten down the rickety walls of the dwellings of the priests and the shrines had a much higher function – they were maps of the stars.

Was the Buzovgrad megalith a shrine? At the moment it is difficult to be sure, though the supposed megalith is in a region with a high concentration of remnants of Thracian heritage.

Nearby, in Kazanlak, is the renowned tomb that is a Unesco-protected monument. From the Gate of the Goddess you can see the Koprinka Reservoir, on the bottom of which lie the remains of the ancient Thracian town of Seutopolis. For some years now the valley, which was once called the Valley of Roses, has been better known as the Valley of the Thracian Kings, because of the great number of Thracian burial grounds that have been discovered there. In 2000 the late archaeologist Dr Georgi Kitov unearthed several of them, finding once opulent tombs. Many had been robbed, but others still offered traces of ancient burials. 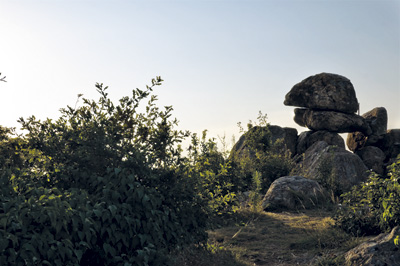 A gate for goddesses?

Why is it called the Gate of the Goddess? The Thracians believed that the universe was created by a single deity, the Great Goddess, whom the rock exemplified. The goddess self-conceived and gave birth to a son – the Sun. The two then had an incestuous relationship, from which a boy was born. He became the first king, and every Thracian king who followed claimed divine origin.

This story explains the symbolism that the ancient Thracians seem to have attributed to the sunset on 21 June – the rays of the sun "impregnate" the rock, signalling the start of the next round in the eternal cycle of the year.

The so-called Bashtin Kamak, or Father's Stone, which is nearby, perhaps adds weight this theory, as it resembles a huge penis.

So far it is anybody's guess whether the Gate of the Goddess and the Father's Stone are the result of the effort of hundreds of believers who built a rock shrine some 4,000 years ago, or are of natural provenance.

One of the stones at the Gate of the Goddess, however, bears witness to the faith of a man who believed that the area was infused with mystic power. This is a memorial plaque to the Thracologist Professor Alexander Fol, who set up the Institute of Thracology with the Bulgarian Academy of Sciences. He died in 2006 and his wish was that a portion of his ashes be scattered at the Gate of the Goddess.

The Thracians used to build their shrines near curiously shaped rocks on high peaks. They did additional work on the rocks for the purposes of the cult activities – they built structures and carved ducts and altars in which they made libations with blood or wine. The worshippers left their gifts for the deity in rock crevices, anything from broken ceramic vessels to votive tablets. 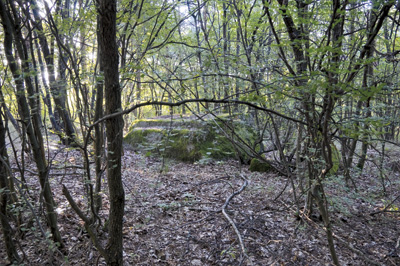 The longest-lasting shrines were in use from the Bronze Age until the end of antiquity. During the period of Christianisation some of them were destroyed, but others remained sacred places and were turned into Christian shrines. Such was the Indipasha (pronounced Indipas-ha) shrine in the Strandzha.

It is not widely known that the people from the plains made their sacrifices in holes in the ground. This led to enormous cult complexes known as the "hole shrines." One of the largest of these was discovered near Lyubimets, close to the Trakia motorway. Unfortunately, in 2006, a large portion of it was bulldozed by construction workers, probably on purpose.