IN THE DEVIL'S FOOTSTEPS

Parts of Bulgaria may be as beautiful as Heaven, but Satan is always lurking around the corner

Travel agencies often use the word "paradise" to describe Bulgaria’s natural landscape and holiday hideaways. If you consult any Bulgarian about somewhere in the countryside you are thinking of visiting, you will probably hear the phrase "a piece of heaven" at least once. Even in the national anthem Bulgarian land is referred to as "Heaven on Earth". However, as you become more familiar with the country's geography and history, you'll come across fewer signs of heaven and many more of hell. The Devil and his kingdom appear in the names of rivers, caves and natural phenomena. You can go fishing along the Devil’s River, take a walk on Hell Hill in Plovdiv, or go 300 metres underground into the depths of the Devil's Throat, a cave near Trigrad. The diabolic is to be found not only in toponyms, but also in churches. Some monasteries are famous for their murals depicting dreadful scenes of Satan luring people into sin. You might have heard of the church of Sveta Petka in Rupite as a place of worship, so it may surprise you to learn that some Eastern Orthodox priests consider that its founder, Vanga, was a witch and "a limb of Satan". 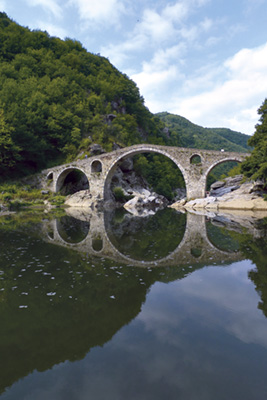 Dyavolski most, or the Devil's Bridge, spans the river Arda, 10 kilometres north-east of the town of Ardino. Built in the 16th Century at the time of Sultan Selim I, it was part of the road that connected the Upper Thracian valley with Western Thrace and the Aegean Sea. A local legend has it that the name of the bridge derives from the times when Bulgaria was under Ottoman rule. A local lord fell in love with a Bulgarian girl and decided to force her to join his harem. The girl tried to escape into the mountains and ran along the river, with the Ottomans following her on horseback. On reaching the bridge, she decided to jump into the river and drown herself. At that moment her followers suddenly stopped in the middle of the bridge. Looking down at the river they saw the reflection of the Devil – a horned head. They fled in terror, the girl was saved and the bridge was associated thereafter with the evil spirit. Another legend says that the shadow of a girl was built into the bridge, thus causing the girl's death. Some locals claim to have seen a footstep of the Devil imprinted on one of the rocks by the bridge, while others are convinced that the roar of the Arda river is actually the laughter of Satan. 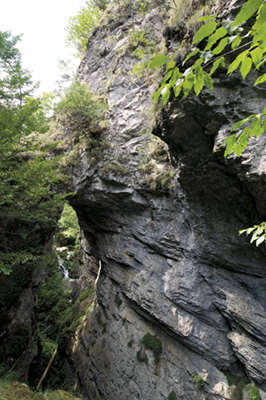 In the area of Haidushki Dol in the western Rhodope you can come across a rock formation connecting two cliffs over a turbulent river. It is a natural bridge around 10 metres long and 2 to 3 metres wide. It was known as the Devil's Bridge because only he would dare to cross it, but interestingly a local legend has nothing to do with Satan. According to it, the bridge between the cliffs marks the reconciliation of two brothers who were fighting over their father's property. This Devil's Bridge is part of the 19 kilometre western Rhodope eco-path, which traverses three rivers and the villages of Yagodina, Borino and Chala. Not far from the bridge you will come across the waterfall of Haidushki Dol, where you can enjoy the beautiful natural setting and have a picnic in the wooden gazebo. The rare plant Silivryak, or Haberlea Rhodopensis, is found in this area. It can revive and regrow, even after it has been totally dried out.

It seems that the Rhodope is one of Satan's favourite haunts. Less than two kilometres north of the village of Trigrad there is a deep cave, formed as a result of surface collapse and the activity of an underground river. 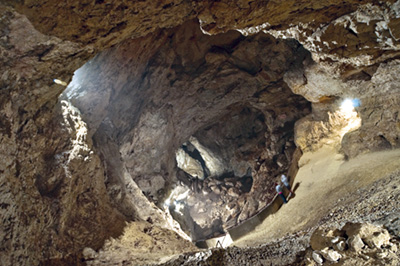 The original cave entrance resembles a devil's head, hence the name Devil's Throat, though some say the name has something to do with the fact that objects carried by the river into the cave though this hole never come out.

Some locals are convinced that Orpheus started his journey to Hades in search of his beloved Eurydice from this very point. However, this is probably more of a device to attract tourists than a real belief.

Visitors enter the cave through another, manmade entrance. An artificial gallery leads you to an enormous cavern filled with the deafening sound of a stunning underground waterfall, the highest in the Balkans. To get out you have to climb 301 steep, narrow, wet stairs leading to the Devil's "mouth".

The cave is friendlier to animals – the largest colony of Common Bentwing bats in the Balkans lives here. 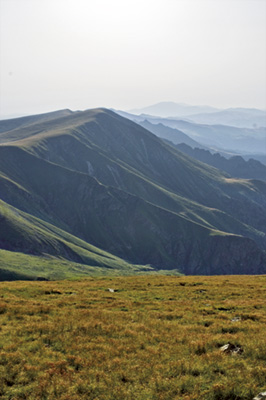 What do you think would be the most appropriate name for one of the largest and most difficult- to-access nature reserves in Bulgaria? Dzhendema, or Hell, of course. It is situated on the southern slopes of Mount Botev (2,376 m), the highest peak in the Stara Planina range and is a part of the Central Balkan National Park. Dzhendema is known for its rich forests, deep and narrow canyons, jagged cliffs and breathtaking waterfalls. Many wild species inhabit it – wolves, bears, deer, wild goats and eagles. The main attraction of the Hell area is a 124.5 metre waterfall, the highest in Bulgaria. Ironically, it is called Rayskoto Praskalo, or Paradise Sprinkler. The nearby hut is called Ray, or Paradise. The Dzhendema area attracts thousands of visitors each year and is a popular site for climbing, paragliding and eco-tourism. 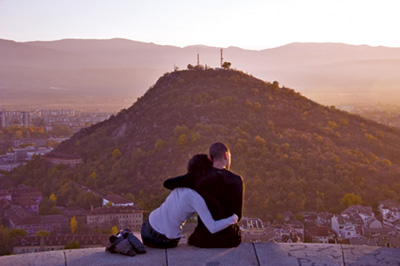 Dzhendem Tepe is the highest of the six hills of Plovdiv and still keeps its Turkish name, which means Hell Hill. In Antiquity, however, the place had a different name and was known as the Hill of the Dryads. An enormous statue of Apollo rose from its top. The early Christians demolished the statue and built a basilica in its place. Later on, the Ottomans called the site first the Hill of Ghosts and afterwards Hell Hill. It remains a mystery why they did it. Under Communism, the ruling party tried to impose a new name and the site was officially called the Hill of Youth. This didn't last long and since 1990 the Turkish name has been used again. 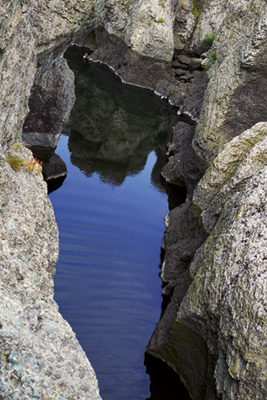 Sheytan Dere, or the Devil's Gorge, is another site on the river Arda with striking natural beauty and a scary name. It is situated near the Studen Kladenets dam, south-east of the town of Kardzhali. Over thousands of years the fast-flowing Arda has eroded the surrounding cliffs to form a narrow canyon adorned with odd stone shapes. Semi-precious stones such as agate, jasper, opal and amethyst can be found nearby. You can hire a boat and check out for yourself the rumour that a gigantic catfish lives in the gorge. Local legend has it that some fishermen once saw an islet in the water and landed on it to cook their fish. Suddenly the islet began moving – it was, in fact, an enormous catfish. The fishermen managed to escape but the legend of the river monster still haunts the gorge. Sheytan Dere is certainly a place worth seeing but once there take care, as some visitors have been carried away by the fast current and drowned.

At the northern end of Bulgaria's Black Sea coastline, a picturesque landscape dotted with small, sparsely inhabited villages leads to the border with Romania. However, at Kamen Bryag, or Rocky Coast, you won't find a welcoming beach. High jagged cliffs jut out into the waves. Each year on 1 July Kamen Bryag becomes a place of celebration, as New Agers from all over the country gather on the cliffs to see the sunrise. This place, however, has a darker side, as the dangerous cliffs have taken many lives throughout the years and you can see the memorial stones of the young people who have died here, falling or jumping from the cliffs. 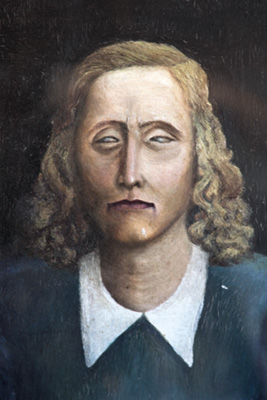 Vangelia Gushterova (1911-1996), known simply as Vanga, was a blind clairvoyant from Petrich, who has always been a subject of contradictory opinions. Thousands of people whom she healed or helped to resolve critical issues in their lives regard her as a prophet or a saint. Others claim she was a charlatan and the Holy Synod of the Eastern Orthodox Church was convinced that she was possessed by demons. Long after her death the attitude of the Bulgarian Orthodox Church towards her continues to be an ongoing issue. All her life Vanga dreamt of building a church. In 1994 the St Petka of Bulgaria chapel was erected near her house in the Rupite area near Petrich. The Bulgarian Orthodox Church refused to consecrate it because some architectural details and murals were in breach of the canon law. Later on, however, it did consecrate the building, on learning that the Macedonian clerical authorities were ready to do it themselves. Seventeen years later it appears that the case of Vanga continues to generate controversy. A monk from Mount Athos recently published a book which stated that Vanga was a witch who communicated with dark powers. Still, she is the founder of an officially consecrated church. 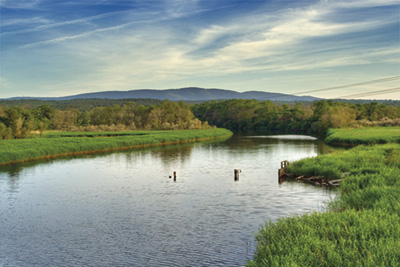 Dyavolska Reka, or Devil's River, rises in the Strandzha and flows into the Black Sea through the town of Primorsko. In its middle section the river forms a swamp which is below sea level and people say this is why it got its devilish name. There is another explanation, however, as during the summer Dice snakes crawl out of the river and scare the tourists. The Devil's River is not suitable for swimming but is a popular fishing location.

The large bay where it hits the Black Sea is, accordingly, called Devil's Bay. 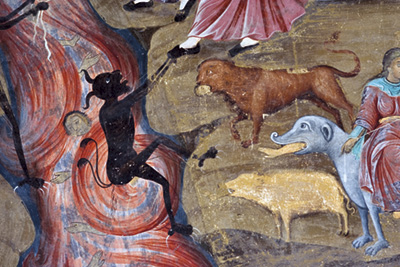 If you pick at random any Bulgarian monastery to visit, you have a good chance of coming across the Devil again, instead of God and His angels – on Revival Period murals. Rila monastery, the biggest and the most visited in the country, boasts vivid scenes of Doomsday. Similar depictions can be found in the Holy Mother of Christ church in Dragalevski Monastery. The Preobrazhenski Monastery even has an icon known as Doomsday With Black Devils. Another extensive review of Satan’s deeds is to be found in the Churilovski Monastery near Petrich. People often call this "the monastery with the devils" and with good reason. Dozens of wall-paintings show the Devil torturing the guilty or luring the innocent into sin.

Priests say that the scary paintings were made in order to educate people and prevent them from sinning, a mediaeval concept that Western European art rejected after the 15th Century, but which lived on in Bulgarian lands well into the 19th Century.