The gold mask also used as a drinking vessel was buried 2,300 years ago with its owner - presumably the Thracian king Teres II (351–342 BC). It was discovered in 2004 in Svetitsata tumulus near Shipka. The mask weights 670 grams © Anthony Georgieff

In Antiquity, Bulgaria's mysterious tribes had no written culture but were excellent goldsmiths

The stories all begin differently. A villager goes out to plough the fields that his father and grandfather had ploughed before him for years, never getting anything besides grain in return. With a backhoe, a construction worker digs a trench for a canal. An archaeologist sinks a shovel into a burial mound. Or an imanyar, or illegal treasure hunter, scouts around with his metal detector and digs where the device squeals the loudest.

In every case, the ending is the same – the villager, construction worker, archaeologist or imanyar finds a gold treasure. And except in the case of the imanyar, also the world learns about it.

One of the most famous cases of such a discovery in Bulgaria was in 1925. Two brothers from the village of Valchitran near Pleven were hoeing their vineyard with the help of 15 workers when barely 30 cm, or one foot, below the surface they came across a few large "brass soup bowls" and "lids." The brothers decided that the vessels were a sure sign that there was a real treasure somewhere nearby, so they tossed them aside and began digging frantically around the area. They found nothing. Disappointed, the brothers gathered up the dishes and since they were quite large, they began using them to feed their pigs. The authorities eventually heard about the discovery and confiscated the "brass bowls." Today the Valchitran Treasure remains the largest gold cache ever found in Bulgaria. The vessels weigh 12.5 kg, or 27.5 lbs.

Of course Bulgarians had been discovering treasures long before that. Dozens of local fairytales begin with a poor villager who finds a jar full of gold coins.

Imanyarstvo, or illegal treasure hunting, has developed a folklore of its own. Imanyari believe spells and magic charms protect hidden treasures and that the treasure itself gives away its hiding place, appearing as a dream vision or a fire during the night on major religious holidays, usually St George's Day. Anyone besides the rightful owner who discovers a treasure and tries to take it has to battle the talasam, or goblin, that guards it – all without uttering a single word. Even if everything goes smoothly, the treasure remains dangerous. According to one legend, a treasure brings happiness and luck only if an orphan finds it. 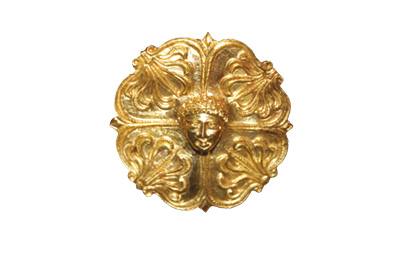 We can only guess at the number of treasures imanyari have dug up. Every archaeologist in Bulgaria knows of at least one case in which valuable artefacts have found their way into illegal private collections or have been sold abroad.

However, the treasures that have ended up in Bulgarian museums have become some of the most internationally recognisable aspects of Bulgaria's cultural heritage. The late archaeologist Georgi Kitov attracted the attention of National Geographic, Discovery Channel and Time magazine – as much for his practice of digging up burial mounds with a backhoe as for the sensational finds he has made. His "golden streak" began in 2004, when he discovered a 600 g, or 1.3 lb, gold mask from the 5th Century BC in the Svetitsa mound near Kazanlak.

But the popularisation of Bulgarian treasures outside the country has a much longer history. In the 1970s Lyudmila Zhivkova, daughter of Communist dictator Todor Zhivkov, chaired the Committee for Culture. A historian by training, she initiated a series of archaeological exhibits. One of them, "Thracian Art in Bulgarian Lands," visited 25 international capitals and so impressed Bulgarians themselves that they began referring to all the various treasures as one – the "Thracian Treasure." This tradition has stayed on to this day. According to the former Culture Minister, Stefan Danailov, between 1994 and 2006 Bulgaria's Thracian treasures were included in 17 international exhibits, including France, Switzerland and Japan. 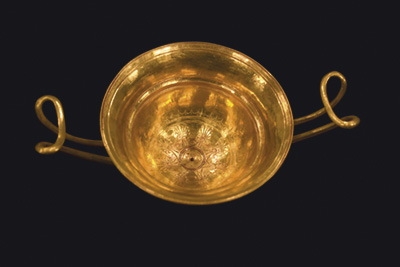 These travelling exhibits are the main reason that when you go to a Bulgarian archaeological museum, you're likely to see replicas of the treasures instead of the real thing. Some conspiracy theorists claim that even the "originals" are not original. Rumour has it that in the 1970s high-ranking Communist officials – Zhivkova herself was said to be mixed up – secretly sold the originals to private collectors in the West, leaving Bulgarian museums with exact copies. 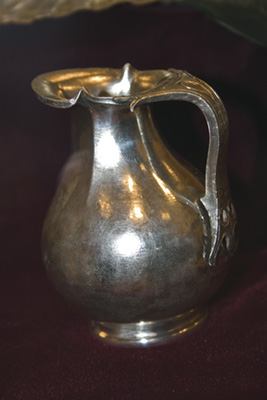 Most of the deceased were sent into the afterworld with modest collections of everyday items. In a dozen or so of the graves, however, archaeologists led by Ivan Ivanov discovered gold. This is a sure sign that the community near Varna practised social stratification. Most of the "golden" graves were empty – the golden decorations were arranged on top of crude clay masks that represented human faces. The person at the top of the pyramid, however, was there – in grave number 43. This king/high priest was put to rest with all the symbols of his worldly power – a stone axe with a golden handle; a gold diadem, bracelets, earrings and trimming on his clothes; and an empty gold cylinder that some interpret as a phallus, while others say is the handle of a whip.

The culture that created the Varna necropolis disappeared, most likely overwhelmed by the waves of settlers from the East who flooded the Balkans at the end of the Copper Age and the beginning of the Bronze Age. The newcomers were also fond of gold – several of their treasures have been discovered recently. In 2004 Martin Ivanov's excavation of graves at the necropolis in the village of Dabene near Karlovo revealed miniature beads, a gold dagger and hundreds of golden rings that were buried with their owners during the 3rd millennium BC.

The Valchitran Treasure is not the only hoard from the end of the Bronze Age between the 16th and 12th Centuries BC, a period that more or less coincides with the Trojan War. However, the treasure's 13 objects, whose functions have still not been clarified, are without a doubt some of the most impressive archaeological finds ever made in Bulgaria.The heyday of gold treasures in Bulgaria – at least for the ones we know about – came considerably later. In the middle of the 1st millennium BC Thracian kings emerged from historical anonymity and began to appear in the annals of the neighbouring Greeks. The Thracians never developed their own writing system or showed much of an interest in writing in general, judging from the scarce inscriptions that have remained – most of which are found on vessels from various treasures. 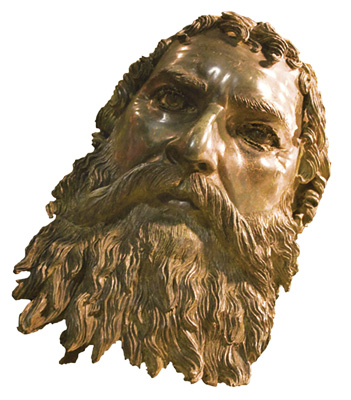 2004 was a golden year for archaeologist Dr Georgi Kitov. After discovering the stunning gold mask in Svetitsata tumulus, he found another treasure in the neighbouring Golyamata Kosmatka tumulus. However, no body was prepared for the discovery of a bronze bearded head on the site. Kitov speculated that the head belonged to a life-size statue of the Thracian king Seuthes III (331–300 BC) and was ritually severed from it

Thracian rulers displayed their wealth and political might in a far more conspicuous way – with huge gold treasures. The golden mask from Svetitsa, which according to Kitov belonged to King Teres, is only the tip of a gigantic iceberg of silver and gold. The 165 pitchers and rhytons from the Rogozen Treasure were crafted between the 6th and the 4th Centuries BC. They are silver, but the images carved on them in relief are gilded with gold-leaf. The scenes offer rare evidence of the ancient Thracians' pantheon and beliefs. During the 4th Century BC Thracian craftsmen produced the exquisite rhytons, amphorae and phials from the Panagyurishte Treasure, discovered by three brothers digging up clay for bricks. During the same century was created also the precious horse bridle that was buried in a bronze container, only to be discovered in 1963 in the town of Letnitsa during the building of a barn. Some archaeologists interpret the golden figures on the bridle – which show a horseman killing wild beasts and having sex – as an illustrative history of the life of Thracian kings. During the 4th Century BC a man and a woman were buried in the Mogilanska mound near Vratsa, together with a magnificent golden diadem and a silver kneepad with a strange image of a woman whose face is half covered with horizontal lines.

Why did the Thracians bury their priceless riches? Some of the treasures probably found their way into the ground to be hidden during wartime – and their owners never returned to retrieve them. However, it was for other reasons that the Thracians placed precious artefacts in graves and tombs.

The Thracians believed that after death a person began a new life – according to descriptions by Greek historians, the Thracians considered the afterworld such a pleasant place that they laughed when someone died. However, in their new lives the deceased – especially kings and aristocrats – needed everything that they had enjoyed while still in this world. For that reason they killed horses yoked into expensive chariots near their graves, left richly ornamented serving sets and weapons near their couches, and – if what evidence suggests is true – specially sacrificed the dead man's favourite wife. Gold luxury items were an integral part of life, which the Thracian kings wanted to take with them in death.

Gold also served another purpose. The Thracians believed that gold possessed a mystical power that connected the world of the living with that of the dead. Bulgarian folktales still contain traces of this belief.

When the heroes find themselves in an enchanted kingdom, usually referred to as dolnata zemya, or the underworld, the objects there are usually made of gold or – in the worstcase scenario – silver.

The most interesting graves from the Varna necropolis are on display with their entire inventories at the Varna Archaeological Museum. Don't miss the exhibit at 41 Maria Luiza Blvd, open from 10 am to 5 pm every day except on Mondays and national holidays.

You can find the Valchitran Treasure and the golden mask from Svetitsata tumulus at the National Archaeological Museum in Sofia at 2 Saborna St, which is open every day from 10 am to 6 pm.

You can also see some 20 of the pitchers at the National Museum of History in Sofia at 16 Vitoshko Lale St, open from 9:30 am to 6:30 pm. The museum is closed on national holidays, but entrance is free every last Monday of the month. The collection also includes the treasures from Panagyurishte, Letnitsa, Borovo, Dabovo, Harmanli and some of the items from the Mogilanska mound.