FALLING IN LOVE WITH THE CARS OF COMMUNISM

Rusting away in back yards and broken up for spare parts, what once was the pride of the East bloc generates qualified nostalgiaFalling

At the time, those were either the butt of jokes, or valuable possessions: objects of envy to be lavished with care. The cars of Communism provoked wildly diverging feelings while they were still being manufactured. To start off with, the planned economy of the Soviet bloc never succeeded in hitting the right production benchmarks, which means that citizens were unable to just walk into a shop and buy a car. Provided they had saved the money, they had to put their name on a waiting list, sometimes spanning over 10 years. Then, if they were lucky, a car would be offered to them (don't mention the colour!) That car was basically bought for life, necessitating frequent maintenance, mostly in backyards and makeshift garages. But these cars did look sturdy: designed, manufactured and dispersed by centralised economies, they felt almost like members of the family, as they transported people and goods along the broken roads of Eastern and Central Europe. Brands, models and capacity may vary, but the common denominator today is nostalgia in anyone over 30. This is the reason why people flock to popular retro car parades to marvel at the newly-painted Trabants, well-preserved Volgas or the compact Zaporozhets. The feeling is common among the older generation of car owners: now you can change your vehicle every few years, but in the good old days a car really lasted. 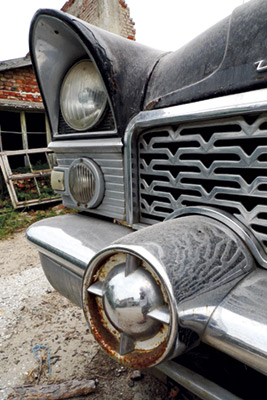 During its 22-year production, the Chaika was a status symbol. A near-clone of the Packard Patrician and Mercury, it was allotted to party officials and VIPs and not made available to the general public. In all its 1950s chrome glory, the GAZ M13 model was evidence that Western ideas did filter behind the Iron Curtain – albeit slowly. The Soviet Union produced two basic Chaika models from 1959 to 1981: the M13 with its 195 horsepowers and top speed of 99 mph and the 1977 version, the M14, with its 220 horsepowers and top speed of 109 mph. The Chaika was also the Bulgarian elite car of choice and the National Security Service had 60 of them. In 2008 the last 20 Chaikas, left over from driving around Party leaders and officials, were sold at an auction, with the best preserved fetching 32,000 leva. 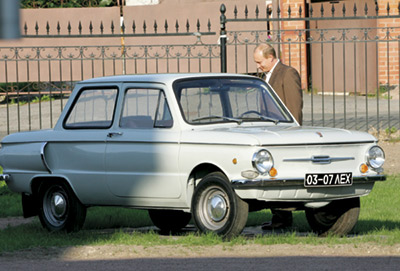 Throughout its life this chubby car earned itself many fans. Produced at the ZAZ factory in Ukraine from 1960, it was cheap, suitable for bad roads, and even had a modification for people with disabilities. The no-frills construction of the ZAZ-965, which mirrored the Fiat 600, had an air-cooled engine with 23 horsepowers, and its 4-speed gearbox delivered a maximum speed of only 80 km/h. Production of the first model only numbered just over 300,000 cars, and in Bulgaria the waiting time for a ZAZ was between four and seven years. In 1994 the ZAZ factory ceased assembling the cars, but the Zaporozhets is fondly remembered – and in some cases driven still – with nicknames such as Hunchback, Big Ears and Khrushchev's Revenge. 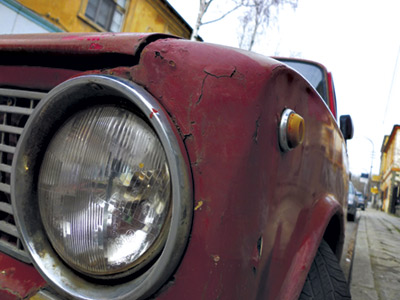 This symbol of Soviet entrepreneurship, based on Fiat, could be found everywhere. Produced by manufacturer AvtoVAZ, the "economy car" based on easy functionality that you could fix yourself was exported in the millions by the Soviet Union: over 60 percent of close to 19 million cars were sold throughout the world and can still be seen today from Prague to Havana. The Ladas with police colours you see speeding around – so to speak – in Bulgaria are the 1982 generation: the classic 2107 model with 72 horsepowers, maximum speed of 150 km/h and acceleration from 0 to 100 km/h in 17 seconds. You might laugh at them, but Ladas were adapted as police cars because of their strength and reliability in adverse conditions – they are the only car brand to set tyre on all the continents, including Antarctica. 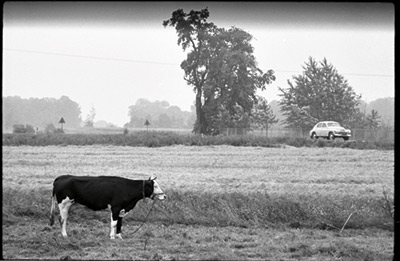 In 1951 the Warszawa started out as the first Polish car with a new design after the Second World War, manufactured by the Fabryka Samochodów Osobowych in Warsaw. The design, however, wasn't Polish – it was built under licence from the Soviet Pobeda, which accounted for the solid appearance and the high fuel consumption. Precisely because of the latter, the Warszawa never made it past the 300,000 production mark and was discontinued in 1973 – proving that even in Communist countries the market was sensitive to consumers' demands. However, it still retained its popularity as a taxi because of its sturdiness. 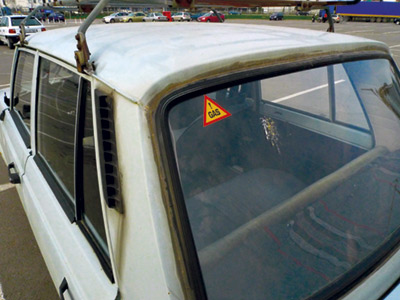 Wartburg has a long history of automobile construction – the name dates back to 1898, when Automobilwerk Eisenach produced the Wartburgwagen. But the brand's time in the spotlight dawned in 1966 with the release of the Wartburg 353 model, also called the Wartburg Knight. This vehicle boasted 45 horsepowers, 0 to 100 km/h in 20 seconds, and a maximum speed of 130 km/h, and by 1986 production of the 535 model reached more than 1.2 million cars. Together with the Trabant and the Zaporozhets, the Wartburg was one of the regular sights on Bulgarian roads some 20 years back. 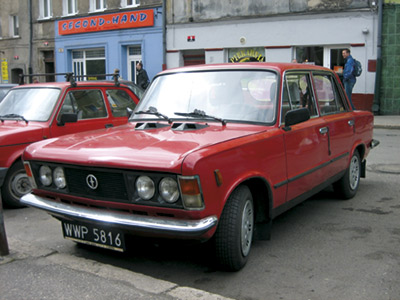 Italy's Fiat and the Polish automobile industry started fraternising as early as 1932, when the joint Polish-Italian company Polski Fiat SA was created. The German occupation of Poland put an end to production, but the brand was revived in the 1960s and the Fabryka Samochodów Osobowych started assembling the Polski Fiat 125p in 1967. Together with the 126 model, production ran for 33 years and resulted in more than six million cars, manufactured both in Poland and abroad. The cute and tiny Polski Fiat 126 was a hit in Bulgaria as well. It served as a family car, despite being designed as a small city model – it was a common (and quite comic) sight to see a car stuffed full of children, suitcases tied onto the roof rack, as the family set off on holiday. In 1992 Fiat bought Polski Fiat, and now real Fiats are being manufactured in Poland. 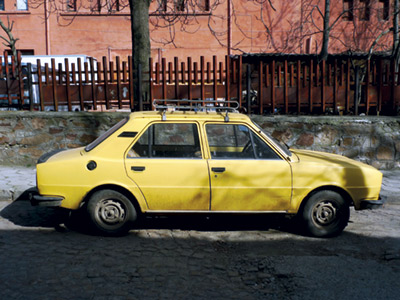 From weapons manufacturing through bicycles and tanks to one of the most popular car brands throughout Europe, Škoda has had a long and successful history. Despite essentially keeping the same model from the 1960s to the 1980s – with 130 horsepowers and rear engine – Škoda was a favourite not only in Communist countries, but also in England and Western Europe, with the models Estelle, Octavia, Rapid and Favorit. The most popular models on Bulgarian roads were from the ubiquitous rear-engined 105/120/125 range. After the end of their 14-year production run in1990, these models accounted for almost two million cars. It is now owned by Volkswagen. 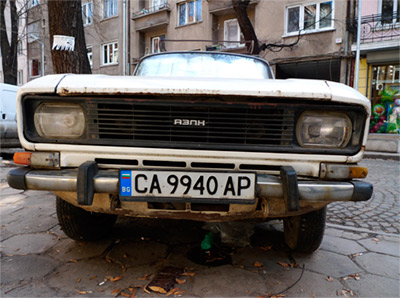 The Moskvich is history in every conceivable sense – it marked a whole era in Soviet automobile production. Designed to be affordable and able to cope with the bumpy Soviet roads, the Moskvich was highly desirable ever since the first cars jumped off the conveyor belts in 1929. During its heyday in the 1960s and the 1970s the cars were exported to many countries. Bulgarians fancied the 2138, with its 50 horsepowers and maximum speed of 120 km/h, and the 2140, which came in two versions of 68 or 75 horsepowers, with a top speed of 140 km/h. In 1965, Bulgaria and the Soviet Union struck a deal for the assembly of the Moskvich on Bulgarian soil – in the Balkan factory at Lovech. Complete ready-to-assemble kits were imported and by 1990 the total production of four models came up to an impressive 304,297. The change of regime put an end to budding negotiations with ZAZ for the production of Tavria cars and in effect terminated the Bulgarian automobile industry. Moskvich was an original Soviet design, but some models were copycats of Opel Kadett, Simca and Audi. 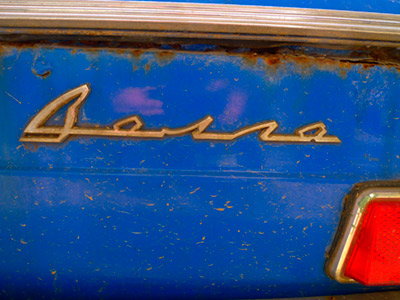 The Volga was synonymous with prestige and status in the Soviet Union. It began as a replacement for the GAZ-M20 Pobeda after the Second World War. The result of careful research and planning by the Soviet engineers, the first cars produced made a promotional run across the Soviet Union totalling 29,000 km. The first modification of the Volga was produced in three series from 1956 to 1970, starting with a 65-horsepower engine, and was popular as a taxi and police car. In Bulgaria, however, the black Volga never went on the market: it was used as a high-class Party car only. After 1989, several such cars found their way into private collections. 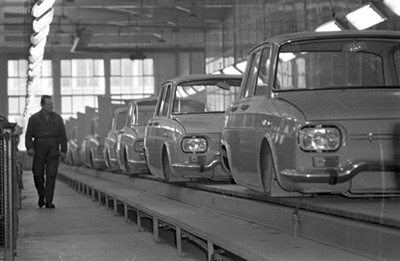 Bulgaria had its own place on the map of car production in the East Bloc. The Communist ideology obviously gave way to pragmatism in several countries, which started assembling cars from Western manufacturers to boost their economies. To take advantage of the cheaper labour and factories in the East, companies such as Alfa Romeo, Fiat, and Simca made overtures to Bulgaria. The state deliberated on the subject until 1966, when it deemed the partnership with Renault to be the most profitable. Bulgarrenault made its public appearance on 20 September 1966 in Plovdiv with 10 vehicles allegedly assembled in Kazanlak's weapons factories. 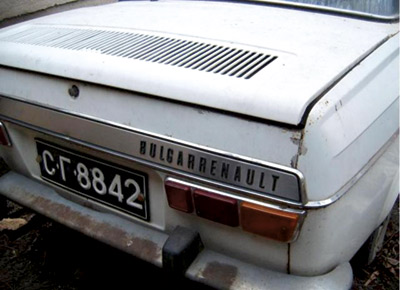 Close on the heels of the agreement between Bulgaria and Renault came another project. The founder of the French automobile company Alpine Jean Redele demonstrated his Alpine A110 in 1966 in Bulgaria, where it was test-driven by Bulgarian motor racer Iliya Chubrikov. The car impressed with its top speed of 219 km/h and 98 horsepowers, and the Bulgarian manufacturers wanted to produce this popular model to enhance their reputation. A deal was struck and Bulgaria bought the French licence, technology and tools for the price of 8 million francs. The Alpine engineers came to train local specialists, while Iliya Chubrikov became a production manager.

The Bulgaralpine, which differed slightly in design from the Alpine A110, was assembled between 1967 and 1969. The exact number of cars produced is unclear and estimates vary between 60 and 120, all for the internal market. The sports car, which cost 8,200 leva, was aimed at racing teams and clubs, but some of the Bulgarian elite bought it for personal use. The Bulgaralpine cars took part in races such as the Monte Carlo Rally as early as 1968, but after 1978 they were retired.

For 30 years and with over 3 million cars the Trabbi, as it is affectionately called, ruled the East Bloc car scene. Produced in Zwickau, East Germany, from 1952 to 1991, the last model had 26 horsepowers and took 21 seconds from 0 to 100 km/h. 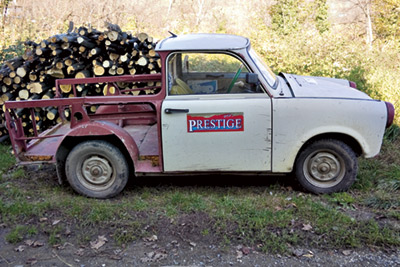 The top speed of the Trabbi was 112 km/h at best – yet it has left an indelible impression on contemporary folklore in the post-Soviet world. A wealth of jokes features rivalry between a Trabant and a Mercedes, in which the Western car always comes off second best. The Trabant is incredibly eco-friendly when not in use: its body is made of recycled materials converted to Duroplast, which is biodegradable and... edible. Old Trabbies end up either as food for the pigs (allegedly) or in a safari car park for tourists in Bulgaria. Some were creatively modified by their owners to serve as trucks and even limos.

The man looked into the mirror and said to his wife: "I don't like this! A pedestrian has been following us for more than half an hour!"