People in Georgi Dimitrov's native village are proud of him, although no one's really sure why

Timeout is declared in the heated football match that is being played on the village square in Kovachevtsi. The children of the two teams sit on the steps of a monument of a man with unruly hair and a stilted pose, and start deliberating when the ice-cream is to be eaten – now or after the final whistle. Do they know who the man on the monument is? "Georgi Dimitrov," the smallest of the boys answers. His team mates nod their heads in confirmation. 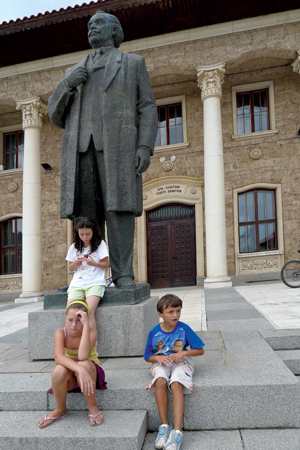 Children in Kovachevtsi aren't sure who exactly Georgi Dimitrov was

Their acquaintance with this personality, however, goes no further; no one knows exactly what Georgi Dimitrov did, besides having "ruled Bulgaria."

Georgi Dimitrov, Bulgaria's first Communist dictator, was born in Kovachevtsi on 30 June 1882. He governed the country from 1946 until his death in 1949, strictly to the orders of Stalin. Dimitrov was the man who introduced and cemented a Stalinist-style personality cult in Bulgaria and orchestrated the demise of the Bulgarian opposition. He launched the policies of land collectivisation, which rendered the Bulgarians landless, and of nationalisation, which deprived them overnight of their factories. During Dimitrov's regime State Security, the political police, became the sinister companion of anyone of independent thought. Political organisations for underage children were set up and membership was mandatory. Worst of all, Georgi Dimitrov started the system of the Bulgarian gulag, in which proportionately more people would die than in the much bigger Soviet Union. 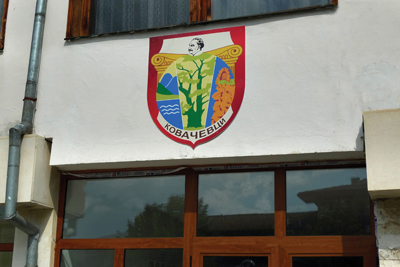 But Dimitrov's native village is proud of him. The face of the "leader and teacher of the Bulgarian people" – a formula that remained in use until 1989 – is pictured on the village's coat of arms. Dimitrov's birthplace has been preserved, and the Georgi Dimitrov memorial house takes up a sizeable space in the centre of the village. The brutalist monstrosity has fretwork-ornamented doors and doubles as a museum to Dimitrov and a chitalishte, or cultural and education centre. It was actually built exactly where the previous chitalishte used to be. It had been built by the Kovachevtsi people in 1928, and was called Svetlina, or Light. After the death of the dictator the name was changed to Georgi Dimitrov, and a public competition was announced in the same year for the design of a building in memory of Dimitrov. The current building was erected between 1953 and 1957.

Subsequently the paved square and the Dimitrov monument appeared. Recently they were all renovated... with EU money.

The memorial house is open for visitors, and a young woman, at once tour guide, curator and librarian, is more than happy to welcome you. Unfortunately, the museum collection reveals little about the man it is dedicated to except the standard pre-1989 official propaganda. The walls are covered with depictions of the most significant episodes in the life of Dimitrov, mainly from 1933, when he was among those accused of setting the German Reichstag on fire. 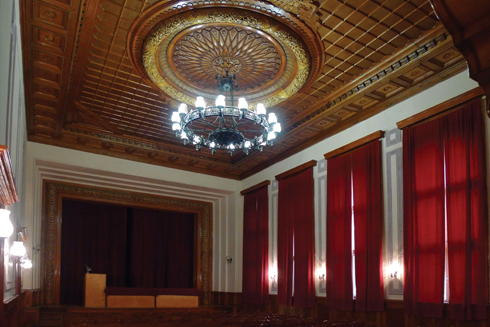 The exhibits – rather mundane household items – are of two types. The first are vases and other ornamental objects that bear the image of the dictator, which were either given to Dimitrov or to the museum as presents by various professional or party organisations from across the country and the Socialist camp. The second type are a few personal bits and pieces, such as a writing table and a set of decorative writing instruments. Most of these arrived in Kovachevtsi after the closing of the Revolutionary Movement Museum in Sofia in 1994. (For details about the exhibits at this institution, see Eccentric Sofia) 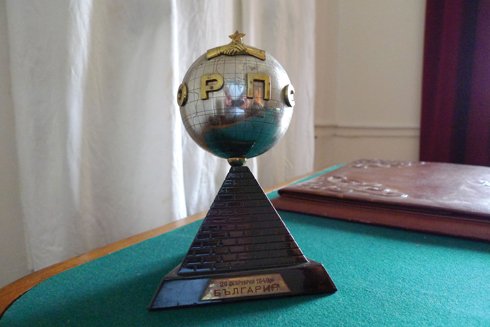 USSR rules: Communist memorabilia from the tiny collection in the memorial building

Nowadays those who visit the memorial are, of course, far fewer than before 1989, the curator says. Once the interest in Kovachevtsi used to be so great that it was necessary to build a hotel near the square, and also the construction began of another building whose function has remained obscure but which was to house a... swimming pool. Now the hotel is run-down, but on the first floor the dusty plush armchairs and advertisements for alcohol testify that for some time after 1990 the place was a disco club. Today the local entertainment industry is centred in a hotel complex at the nearby Pchelina dam. "They have a swimming pool and a restaurant there, and each weekend chalga stars give live performances," the curator says.

As far as the building with the swimming pool is concerned, it remained unfinished. Weeds grow in it now, and the spot where the locals and the guests of Kovachevtsi were to take a swim now reminds you of the set of a third-rate zombie movie. The curator sighs as she thinks of the village's former prosperity, when the lush fretwork-embellished hall of the memorial house hosted congresses of the elite of the Bulgarian Communist Party, or BKP. She then proceeds to Dimitrov's native house.

Because of the similarity between the names, one could easily mistake the Georgi Dimitrov memorial house for his birthplace and the other way round, but they are very different things.

The house in which the dictator-to-be was born is some 200 metres away from the square. Curiously enough, the modest two-bedroom house, tucked away in a green garden, has as little to do with Georgi Dimitrov as the memorial house. 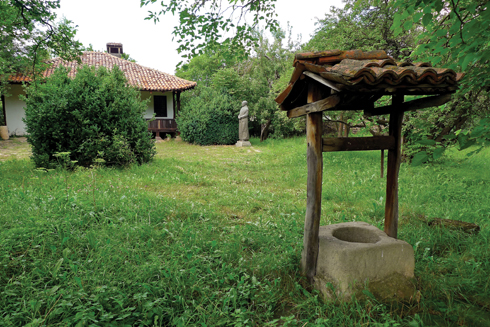 Statue of Dimitrov's mother greets visitors to dictator's birthplace. No one in Kovatchevtsi will admit that she was a devoted Protestant

In 1972 Dimitrov's birthplace was "restored." All the furniture and household utensils that are now in it – earthenware pot, rugs, wooden spoons and so on – never belonged to Dimitrov's family. The collection was set up by borrowing items from the Kovachevtsi villagers and from people living in the vicinity. The rest of the village is a motley array of deserted old houses and, here and there, renovated dwellings which people from Pernik and Sofia, whose parents came from the village, use as holiday homes. Most of the children who play around the Dimitrov monument do not live permanently in the village either, but come there to spend their summer holidays with their grandparents. 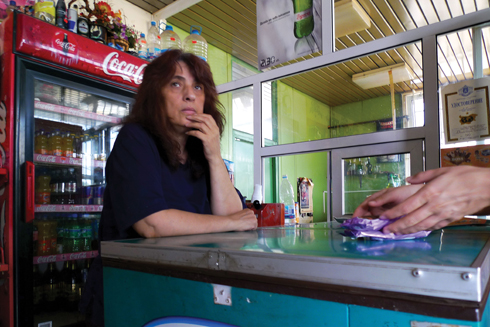 About 400 people live in Kovatchevtsi now

As is the case elsewhere in Bulgaria, the depopulation of Kovachevtsi was the result of nationalisation and forcible urbanisation – policies which were started by Dimitrov himself. This, however, hasn't affected the dictator's glorious image one bit: the villagers still commemorate him, and official celebrations take place every 30 June.

WHO WAS GEORGI DIMITROV? 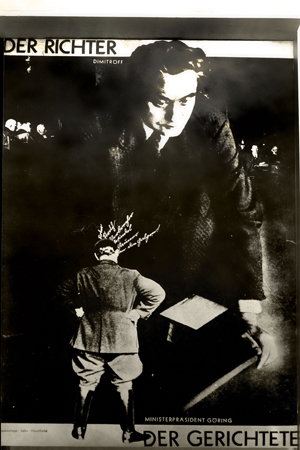 The parents of Georgi Dimitrov Mihaylov (1882–1949) were poor immigrants from Macedonia. His mother, a devout Protestant, baptised him in her faith, which was carefully concealed by generations of Communists who were overtly atheist. The Dimitrovs sought security and a new life in Kovachevtsi and then in Sofia, but with little success. When he was 12, Dimitrov left school and started work at a printing house and at 20 he joined the Social Democratic Party. Politics changed his life forever.

In 1913 he became the youngest MP in Bulgaria, and in 1918 he was given a prison sentence for spreading antiwar propaganda among the Bulgarian troops at the front lines. In 1923, still an MP, he was among the instigators of the so-called September Uprising, the first attempt to introduce Soviet-style revolution in Bulgaria. Dimitrov did not wait around for the bloody suppression of this attempt and fled to Vienna.

Until 1933 he was a clandestine Communist International activist in Germany and Switzerland. His situation changed for the worse in 1933, when the National Socialists came to power in Germany. In the so-called Leipzig Trial, Dimitrov was accused of setting fire to the German Reichstag. He cleverly used to his advantage the wave of indignation in the liberal press around the world. He became a media star, and rallies and campaigns were organised in his support. Eventually Dimitrov received a sentence only for having stayed illegally in Germany. He spent a few months in prison and was then extradited to the Soviet Union.

In 1935 he was elected chairman of the Comintern, and in the period 1937–1945, having been granted Soviet citizenship by Stalin, he was an MP in the Soviet Parliament. He returned to Bulgaria in 1946, when the country was already firmly established in the Soviet sphere of influence. After his death in 1949 Georgi Dimitrov became the sole object of Bulgaria's personality cult. His body was embalmed and for more than 40 years lay in state in a specially built mausoleum in the centre of Sofia. It was buried in 1990. In 1999 the mausoleum was demolished and is now a part of the park in front of the National Art Gallery.

Read 25166 times Last modified on Monday, 14 March 2016 13:41
Published in High Beam
More in this category: « BULGARIA'S SUNKEN CHURCHES FALLING IN LOVE WITH THE CARS OF COMMUNISM »