For at least four months of the year the Black Sea coast is riddled with tourists, beach-goers and campers. Many people have been put off visiting the coastline – some because of the drastic overcrowding, others because of the newly-built concrete hotels of mammoth proportions that spring up all along the shore.

But there is another side to the coast, one of steep cliffs and sea spray, underwater caves and windswept plateaux. That is the unspoilt scenery of the coastline north of Balchik, up to the Romanian border. There are few sandy beaches to attract tourists, but they still come with tents and backpacks, seduced by the atmosphere. The inhabitants of the small villages scattered along the shore seem to be living half a century in the past. Balchik, Kavarna and Shabla are the bigger settlements here, but they too have a quaint air of timelessness that invariably affects the visitor. 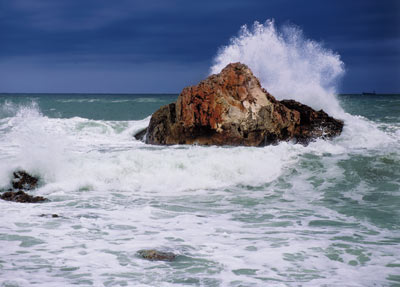 The man-made landmarks only enhance that impression. One of the most famous, the palace at Balchik, was built when Romania settled in the region after the Second Balkan War in 1913. Queen Marie of Romania hired two Italian architects to design the palace, called the Quiet Nest, while a landscaper from Switzerland laid out the park. Fortunately, the elegant complex was preserved intact when Southern Dobrudzha was reincorporated in 1940. The only change was that the park became a botanical garden, which blends seamlessly with both the sea and the buildings of the palace.

Further north is Cape Kaliakra, whose name comes from Greek, meaning "a beautiful cape". A local legend says that St Nikola, protector of seamen, was being pursued by the Ottomans and God created more earth under his feet, so that he could escape. It is a poetic way to explain the 2 km of jagged rock jutting out into the sea. In the end, however, the saint was captured and killed but he is not forgotten. A small chapel, built at the end of the cape in 1993, symbolises his grave. The other monument here relates to the legend of the 40 Bulgarian virgins who tied their hair together and threw themselves into the sea – again to escape the Ottomans. 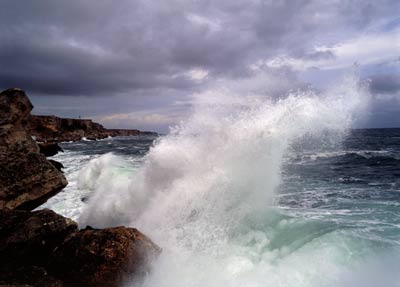 The cape is both a Nature and an Architectural Reserve – you can see remnants of both early Christian graveyards and an ancient necropolis and, if you're lucky, you might glimpse some dolphins in the sea. These are not the only exceptional sights, but the underwater caves that few know about are accessible only to divers. 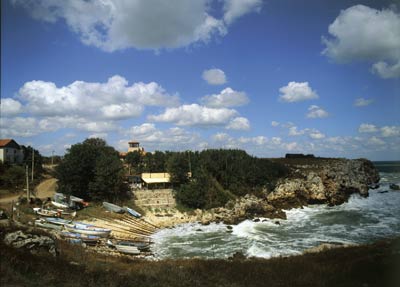 The rocks may be picturesque, but they are also unforgiving. The only place on the north coast where fishermen can launch their boats is the village of Tyulenovo, so called because of the seals which used to live in the Black Sea. The underwater reef along the coast between Tyulenovo and Shabla is the reason for the 150 year old lighthouse in the town. Its light can be seen 17 miles out to sea and when they glimpse it, sailors know that they are halfway between the Danube delta and the Bosporus.

This stretch of land has attracted people for millennia. The oldest discovered settlement in the area dates back to the 5th millennium BC and is now the National Archaeological Reserve of Yaylata. 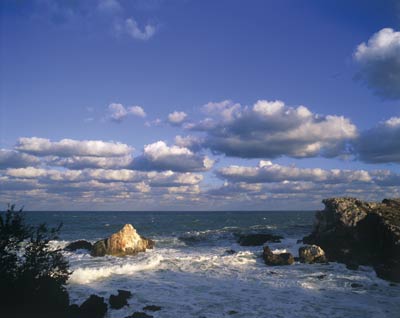 These amazing sights were virtually unknown outside Bulgaria, at least until photographer Juri Tscharyiski, born in nearby Dobrich, decided to do something about it. Having moved to Vienna in 1977, he comes back from time to time to capture the sights of his childhood. His photos are the work of n opportune moment and an immense appreciation of the beauty of the sea and the land. They have been brought together in the album Bulgaria: North Coast, published in English, German, French and Bulgarian.

What instigated this project?

I live in a big European capital where every country advertises its beauty to attract tourists. When you haven't seen anything about your own country for 30 years, you start getting annoyed and you wonder if Bulgaria has no people to think of advertising it. In the biggest bookshop in Vienna there are coffee table books for almost every African oasis, but only two travel guides about Bulgaria, both published by foreigners. And they are travel guides, not works where you can soak up the atmosphere of the place and really feel it. This is what provoked me to start on the project.

The book itself is something I did completely on my own. I did all the graphic design and the photos were taken over 2 to 3 years with both regular film and digital cameras. The realisation of the pictures has great intensity and impact – people wonder if they were taken or drawn. I'm quite proud of the text – for me it is much easier to take a photo than to write about something. You should look through the book picture by picture and read the text, so you can soak up the atmosphere. The most difficult part was financing the project. Half of the necessary funds were eventually granted by the former Minister of Culture Stefan Danailov. 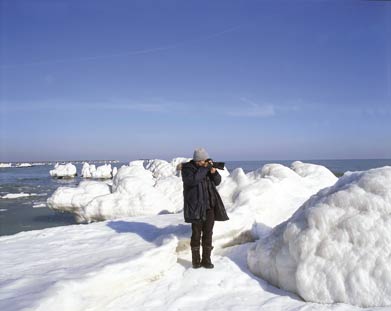 How did the Austrian and Bulgarian public react to the appearance of this photographic record?

People in Austria were very surprised that Bulgaria has landscape like this. They are used to seeing the packed beaches of the resorts in the tourist brochures. Every second person came up to me and asked if this is really Bulgaria. These places are totally unknown to foreigners, which makes the book more attractive. But Bulgarians like it as well, more than half of the total print run has sold in Bulgaria. It is almost out of print now and there are few copies left.

Bulgaria has so many things to show to the world, but we don't understand that we need to have a Western mindset. As far as I'm concerned, advertising the country should be left to foreigners or people like me who have lived abroad for a long time, who know what the demand is and how to present the place.

How did you leave for Austria?

During the Communist times contact with Western citizens was almost illegal, and marriage was near impossible. I met my wife in Albena and we decided we had to be together. It took a year to get permission. The Austrian ambassador advised my wife against marrying a Bulgarian, because it was dangerous. Not only the Bulgarians, but also the Austrians required numerous documents, solely in an attempt to dissuade us. After we married, I did a bit of subterfuge: I pretended to transfer to a university in Sofia, but my wife took the documents, translated them in Austria and I became a student in Vienna. When I went to submit my documents for leaving Bulgaria, they sent me to a comrade who said to me: "What have you done?! Do you know who studies there? Only the boys we send!" They told me there were plenty of dangerous people in Austria and it would be good to meet and talk when I came back to Bulgaria. But I didn't come back until after I had an Austrian passport.

I graduated from the University of Applied Arts in Vienna and I specialised in animation and photography. I started working in advertising, then I became a freelance designer and photographer. For a long time I was a photographer for the Vienna State Opera. I did the exhibition Nudo, based on the ballet of the same name. It was shown at a couple of places in Austria to great acclaim, and also in the National Art Gallery in Bulgaria.

What other projects are you are working on?

Since I love these places on the north coast so much, I have created Eko Nord, an organisation for preserving the coast. We want to stop the concrete from advancing and preserve the region in the state it is now. Bulgaria has no maritime reserve, it's high time some territory was allocated for one and fishing banned. There are dolphins and rare species in our sea – they should be allowed to develop in peace there. We in Eko Nord are ready to provide support and organisation for such an enterprise. I have started many other projects. I go from one village to another in the area and take pictures of people in folk costumes, I also collect stories and songs. I want to do the same for the Bulgarian part of the Danube. I have been taking pictures of the underwater caves on the northern Black Sea coast; this project is quite advanced. My idea is to do a series of photo albums on Bulgaria, but unfortunately there is no funding for such projects.