One of the golden rules of good writing says you must never start a story with description of a landscape.

In the case of Batak, however, the desire to do so is overwhelming. You are tempted to begin with the narrow road that meanders into the Rhodope all the way from Pazardzhik and Peshtera, and the fresh highland air. You search for the best adjectives to describe the water of the nearby Batak Reservoir (crystal? tranquil?). You remember that the Tsigov Chark resort has long been regarded as a pleasant and inexpensive place for a mountain holiday.

The first foreigner to write about this settlement, unknown outside Bulgaria, also fell victim to the trap of scenic description. The Irish- American reporter Januarius MacGahan, a war correspondent of the London Daily News, entered Batak on 22 August 1876, together with Eugene Schuyler, the American consul general in Constantinople. The first part of his report described the steep, narrow road chosen by their Ottoman guides, the Slavic features of the Bulgarians accompanying the group and the bucolic beauty of Batak in its high glen, protected from the mountain storms.

Nobody should be blamed for being reluctant to speak or write directly about what made this small town, with its population of less than 4,000, infamous. 134 years ago, Batak was the scene of one of the worst massacres in the Balkans. 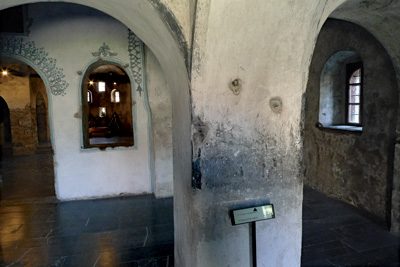 The worst slaughter took place on the night of 2 May, in the St Nedelya Church. The building is still pockmarked by bullets

The killing had been prompted by the failed 1876 April Uprising against the Ottoman Empire. Batak, a prosperous village of about 9,000 inhabitants engaged in the timber trade, had a secret revolutionary committee. It took up arms on 21 April, immediately after learning that the insurgents in Koprivshtitsa had risen up the previous day. The rebels of Batak blocked all the roads and stood in wait. An armed group of Pomaks (Muslim Bulgarians) from the neighbouring villages appeared on 24 April. The two groups met and came to an agreement not to harm the peaceful population.

By 30 April "Batak's citizens had come to believe that it was all over and Turkey had perished once and for all," wrote revolutionary leader Zahary Stoyanov in his Memoirs of the Bulgarian Uprisings. However, that night a bashibazouk army led by Ahmet Aga Barun arrived in the village.

The bashibazouks were irregular soldiers who did not receive any remuneration, not even uniforms, from the High Porte. They lived off loot. This made them ruthless and uncontrollable. They were notorious throughout the empire – very different from the romantic portraits of bashibazouks painted in the 1880s by Jean-Léon Gérôme. 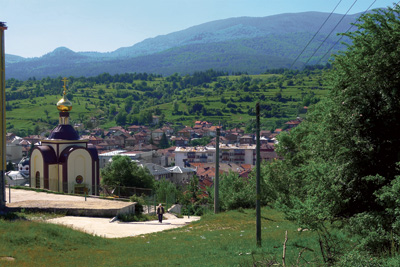 A Russian church, overlooking the town from one of the nearby hills, was built in honour of the Russian forces that entered on 20 January 1878

The bashibazouks who came to Batak in 1876 had been mustered from the nearby Pomak decomposition lay scattered everywhere, in the river, in the meadows and in the streets. The houses had been burned down. A wailing sound could be heard – those who had survived the slaughter were mourning their dead relatives and destroyed homes. Some villagers returned to Batak with Schuyler and his company, counting on their protection. The commission established that about 1,200 people had survived the massacre.

MacGahan also visited Perushtitsa, Panagyurishte, Klisura and Plovdiv and his reports were translated into many European languages. They caused a wave of outrage and would be used as a moral justification for the 1877-1878 Russo-Ottoman War. One of its products would be the birth of modern Bulgaria.

Five generations later, Batak, now with a population of about 3,700, keeps the memory of the massacre alive. Three 1970s monuments, designed in the so-called Socialist Realist style, stand on the hills. Close to them there is a more recent memorial – a cross of the type that became fashionable after the fall of Communism. The displays in the local history museum focus mainly on the massacre. The macabre exhibits include charred, shapeless pieces of wood labelled as decapitation stumps. The interior of the old Sveta Nedelya Church has been converted into a mausoleum. An ossuary stands on the site of the altar. The bullet marks on the walls are clearly highlighted and so is the well which the trapped women dug with their bare hands hoping – in vain – to find water for their children. All descriptions unanimously proclaim that the massacre was committed by the Turks. Since 2008, the town centre has been adorned with a stone Armenian cross, an acknowledgement by the Armenian community in Bulgaria that it had also been a victim of a Turkish "genocide." 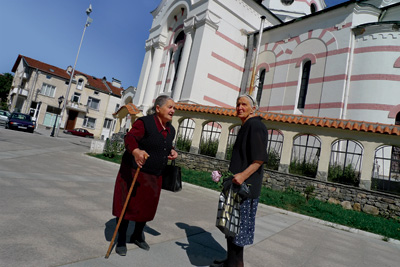 The sight of elderly women talking about cherry jam in front of Sveto Uspenie Bogorodichno, or the Church of the Assumption, may take your mind off the memories of the slaughter and help you to see the Batak of today. At first sight, the town does not seem remarkable, apart from the memory of that historical event. Its old houses were burned down in 1876 and the buildings that have appeared in their stead are not much different to any other small town. The Communist-era slab-covered pedestrian zone in place of the village square is par for the course.

But Batak has its own distinctive character. Some of this can be seen in the abundance of well-maintained plaques commemorating local Communists. In the Second World War, Batak was in the thick of activity of guerrillas from the First Rhodope Brigade.

A curious feature are the donations made to the town by local nabori, or men born in the same year who would be drafted in the army simultaneously. Some of the more impressive gifts include the renovated public drinking fountain, the town clock and an old Soviet MiG. 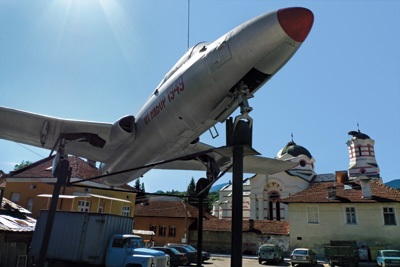 While the spring sun spreads its warmth on your back and you mull over why the fruit in the local market is so much cheaper than in Sofia, you may come to the conclusion that, however tragic, the Batak massacre is a thing of the past. Time heals all wounds – or does it?

So it seemed until 2007, when a conference was organised by German historian Dr Ulf Brunnbauer and Bulgarian art historian Martina Baleva. It had a long and fortuitous title, but it came down to an attempt to separate fact and myth in the Batak massacre. What an overwhelming majority of Bulgarians and the media immediately picked on was the word "myth." 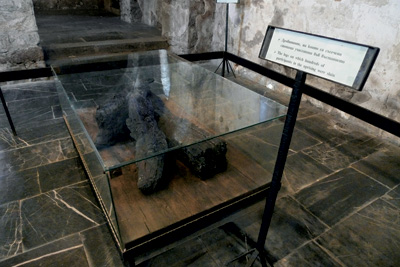 In just a few days, the Bulgarian public collectively came to the conclusion that, in an effort to discredit Bulgaria, an unknown Western power had paid Baleva to deny the existence of the massacre as a historical fact. The art historian was declared a "traitor" and SKAT TV, then the mouthpiece of the Ataka nationalist party, put up a reward for her... address and picture; just stopping short of putting up a reward for her head as well. President Georgi Parvanov, a historian by education, defined the case as "a terrible provocation against our national history." Batak's citizens held a rally where they insisted that the conference be cancelled. The Bulgarian Academy of Sciences refused to provide a room for the event.

As a result, the conference never took place. 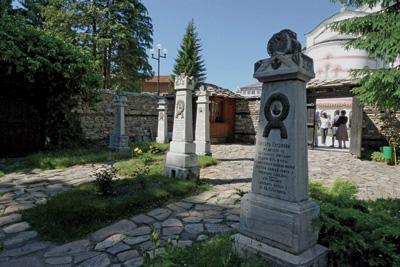 Some of the victims were buried in the St Nedelya churchyard

Baleva's hypothesis was that the photos of the devastation in Batak, which are believed to have been taken between 1876 and 1878, were made much later. In her view, the dramatic photographs of grief-stricken people standing among the bones of those murdered in the church were recreations of the events staged in 1886-1889 at the request of Polish artist Antoni Piotrowski. On the basis of these photographs and MacGahan's accounts, he painted his picture The Batak Massacre as late as 1892. The canvas was displayed at the First National Exposition in Plovdiv in the same year and attracted enormous interest. Baleva believes that it was this very picture that helped the Bulgarians turn Batak into one of the cornerstones of their national consciousness.

Whether Baleva is right is another thing. For example, Ivan Vazov's deeply moving poem "Recollections of Batak" was published as early as 1881. But again, can a poem based on hearsay and the reports of an American journalist with a problem with Bulgarian proper names – who was also known for exaggeration – be used as major pieces of historical evidence? 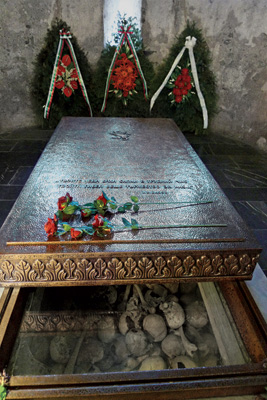 The public and state reaction against any attempt to talk about the massacre in any way different from what has been taught in schools for many decades is quite telling of a nation that has notoriously been unable to come to terms with its own past. Consequently, at the beginning of the 21st Century, the topic of the Batak massacre remains a taboo.

For the time being, to indulge in the charm of Batak's landscape is safer than to question or even explore what took place there 130 years ago.