THE GARDEN OF THE PAST AND FUTURE

It is a small park, with old trees and a playground. The monument in its centre looks simple, with chipped stones and solid geometrical forms. Only when you get closer and really look at it can you see that there are names on the stones – hundreds of names.

The Doctors' Monument is dedicated to the Russian medical workers who died in the 1877-1878 Russo-Turkish war, which liberated Bulgaria from Ottoman rule. As early as 1878 the fund-raising campaign started, and the monument itself was designed by the architects Antoniy Tomishko and Luigi Farabosco and built in 1882-1884.

The four-sided plinth bears the names of 531 doctors and nurses. The four sides of the sarcophagus on top of it list the four largest battles of the war – Pleven, Plovdiv, Shipka and Mechka. 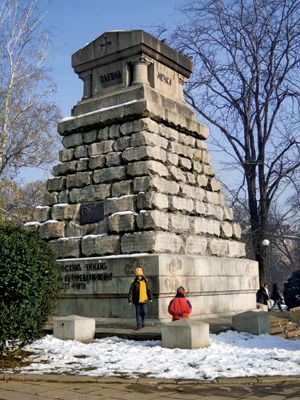 The design for the garden in 1889 was produced by the then Regional Gardener Daniel Neff, a Swiss. He attempted to lay out a park in the spirit of English and Chinese landscaping. It was divided into small symmetrical areas, whose alleys converged on the monument. This plan has not changed significantly since then, maybe because the Doctors' Garden was listed a Monument of Garden and Park Art, the only one of its kind in Sofia.

In 1900-1936 the Higher Education School, as Sofia University was known as at the time, maintained the Doctors' Garden as a botanical garden. During these years Hristo Mihov, the first Bulgarian to gain a degree in landscaping from the University of Paris, tended the garden. It was returned to the city council in 1936 and the botanical garden moved to 49 Moskovska St, but some rare trees and plants remained. In 1945 there was another addition to the west side of the garden, with the building of the National Library. 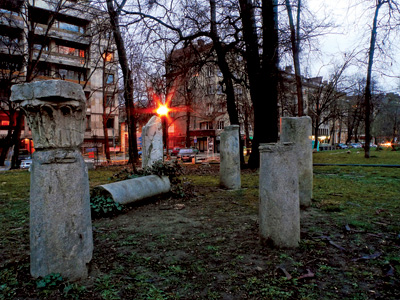 The residential area around the park has always been a prime location in Sofia, with some of the Communist top cadres occupying huge flats

The history lesson in the Doctors' Garden does not end with the monument. In the northeast corner there is a lapidarium with fragments of sculptures and buildings, some of them from Serdica, the Roman predecessor of modern-day Sofia. Others are mediaeval and some are Ottoman. The busts, carved bits of columns and stone tombs look as though the Archaeological Museum has mislaid a few valuable pieces. But here they are a part of the landscape; an extension of the playground for the many children who come here all year round and even toboggan down the small hill when it snows.

Ancient tombstones and columns, and Ottoman inscriptions: The lapidarium in the park is a short history of Sofia

Some of the oldest and finest city architecture in Sofia can be found on Oborishte and Shipka and their side streets. Many houses here were built by rich Sofianites in what was a prestigious area because of its proximity to the royal palace at the beginning of the 20th century. Later, the Communists nationalised the houses and handed them over to state and party figures. After 1989 they changed hands again. The new owners are foreign embassies such as Brazil, the Netherlands, France, the United States and so on. One example, the Palaveev house, built in 1921 by architects Sava Ovcharov and Yordan Yordanov, is now home to the British Council. The area still has prestige and an international feel.

The little boy in the garden sometimes gets vandalised, usually by having pink knickers painted over him

The Doctors' Garden may be small, but the locals love it. You can see this at the south entrance where there is a sign erected by the "Friends of Doctors' Garden" committee, founded in 2004. They were the main force behind the restoration of the garden and the monument in 2003-2004. The committee included ordinary citizens, companies, cultural institutions and diplomatic missions. Thanks to their efforts the garden now boasts a Wi-Fi zone, Halloween and Christmas parties and open air classical music concerts.