Stuck in the past, Montenegro's Cetinje, the former "smallest capital in Europe," is on the hunt for tourists

You never know what you will come across in Cetinje, Montenegro's one-time capital city.

In 1679, Prince Georgiy Dolgorukov arrived from St Petersburg to denounce Prince-Bishop Šćepan Mali, or Stephen the Little, as an impostor. Šćepan had become ruler by claiming to be the Russian Emperor Peter III, who had been killed several years earlier. The diplomatic mission did not turn out as expected. The Russians were stunned by the amounts of rakiya they were treated to and Stephen the Little saved both his skin and his power. He is now known as the first unifier of the Montenegrin clans. 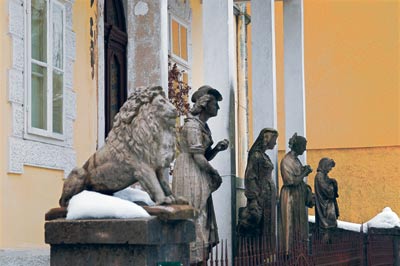 In 1844, traveller Sir Gardner Wilkinson saw decapitated and impaled Turks' heads near Cetinje Monastery. This "decoration" had been put there on the orders of Prince-Bishop Peter II. Handsome and charismatic, he wrote poems with titles such as "The Ray of the Microcosm" and knew, as Wilkinson established personally some time later, that the Ottoman pasha in Mostar did the same with Montenegrin heads. 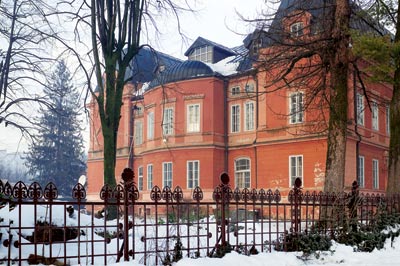 When Dame Rebecca West arrived in Cetinje in 1937, the city was no longer a capital. In 1918, Montenegro had joined Serbia to form a state that would later be known as the Kingdom of Yugoslavia. The Montenegrins so hated the only king they had had, Nikola I, that they never plundered his palace: they did not want to own anything that had belonged to him. Instead, they turned it into a museum. The curator was one of the few Muslims in the city.

When you set off for Cetinje today, preferably along the dramatic, steep, meandering road across the mountain from Kotor, you will not come across anything very shocking. Montenegro's one-time capital is now trying to attract some of the tourist attention that has so far focused on the Adriatic coast, and the area around Kotor and Budva in particular. 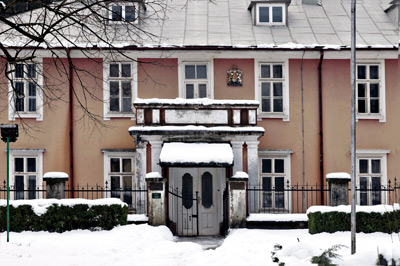 Naturally, in winter this is a much harder job. A thin pall of smoke from the stoves of the 15,000 inhabitants wafts over the town, situated on the high plateau under Mount Lovćen. The pavements, squares and pedestrian areas in the centre are covered with ice that has not been cleaned for weeks and is now as hard as iron.

The only lively, colourful spot is the scarlet caftans of the guards at the entrance to the Presidential Palace.

Prince Ivan I Crnojević (1465-1490) made Cetinje the capital of his Principality of Montenegro for purely practical reasons. This remarkable man was given a Venetian title because of his battles with the Ottomans. In 1482, however, he had to sign a tough peace treaty with Constantinople and send one of his sons there as a hostage (the boy later converted to Islam). In the same year, Ivan I moved his capital far from the enemy's borders, to a place protected by the austere mountains that gave Montenegro its name. 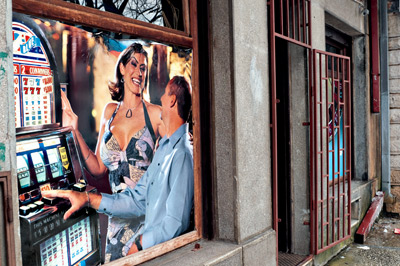 Prince-Bishop Peter II brought the first billiards table into town, but present-day Cetinje is notorious for its casinos and gambling

Ivan I built Cetinje Monastery in 1485 and died five years later. His heir, Đurađ IV, published the first printed book in the Balkans in 1494, but was banished by the Ottomans two years later.

De jure, Montenegro became part of the Ottoman Empire. De facto, it was nearly independent and in 1516 established a form of self-government that has had no parallel in the Balkans. Montenegro became a theocratic state. Power was in the hands of a prince-bishop who resided in the monastery and appointed his successor from among his most talented subordinates.

The Great Turkish War of 1669-1699 came as a double blessing to Montenegro. Nobody would admit it officially, but the country in practice became independent, and in 1697 the bishop's throne was seized by a member of the Petrović-Njegoš family. From then until it joined Serbia in 1918, the country was ruled only by this dynasty. The bishops chose their nephews as their successors and, in 1852, Prince Danilo II did away with the theocratic part once and for all. He got married and declared Montenegro a hereditary principality. 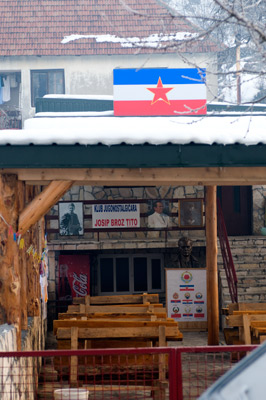 Then followed years of political manoeuvring – and remarkably good luck – under the reign of Prince, later King, Nikola I. His reign, which lasted from 1860 until 1918, is the stuff of movies. His war with the sultan in 1875 incited the Bulgarians to revolt in the following year and this, in turn, provoked the Russo-Turkish War of 1877-1878. The subsequent Treaty of Berlin officially recognised Montenegro as an independent state and gave it the Adriatic coast around Bar.

At times, the actions of Nikola I seemed histrionic, but there were sound political reasons behind them. For example, he demonstrated his support for Russia (a long- standing friend of Montenegro) in its war with Japan of 1904-1905 by declaring war on Tokyo. In 1912 Nikola also declared war on the sultan in Constantinople, which proved to be the formal motive for the beginning of the Balkan Wars, which nearly expelled the empire from the Balkan Peninsula. 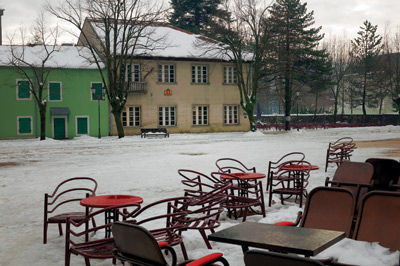 The modest building of the former Royal Bulgarian Embassy is very near the palace of Prince Nicola I. It is now a restaurant

During his long rule Montenegro expanded, and so did his self-esteem. So it was hardly surprising that in 1918 King Nikola sincerely believed that he should be the one to ascend the united throne of Serbia and Montenegro. His son-in-law, Serbian King Alexander I, did not share his opinion. Nikola was exiled from his homeland and lived in Antibes until his death in 1921.

Yet Cetinje owes its faded traces of small-scale grandeur to Nikola. Under his reign, "Europe's smallest capital" acquired its grid of broad streets, its austere palaces and its strange embassies. Each embassy was built in the architectural style typical of the country it represented. The British one is Victorian, the French Moorish, the Russian looks as if it was imported from St Petersburg, and the Bulgarian is, well, modest. Today most of them house different arts faculties. The Bulgarian one is a restaurant. 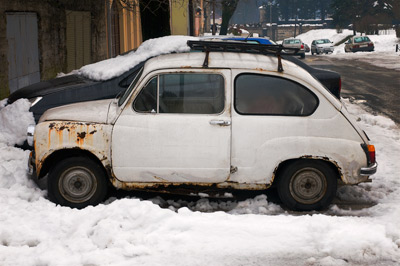 Cetinje's past is not only period buildings. The streets are also rammed with Yugo cars, many of which have been rusting for years

Cetinje started on its long, slow road of decline with Nikola, although it suffered its final blow much later. On 13 July 1946, the Yugoslav Socialist Republic of Montenegro chose for its capital Titograd (present-day Podgorica).

Ironically, Yugo-nostalgia lurks in the winter air of Cetinje. The slogans glorifying Comrade Tito on the walls of the typical Stalinist communal buildings may be faded, but the memorial plaques on the walls of the houses where the local Communist party was born and spent its first years are perfectly preserved. Located in a modified family garage, the Club of the Yugoslav nostalgists announces its existence with brightly coloured portraits of Tito and a prominently displayed flag of the former federation.

Most Montenegrins consider themselves Serbs, and their country was Serbia's most loyal ally after the disintegration of Yugoslavia in the early 1990s. But things are changing, despite the nostalgia. The centre of Cetinje is dominated by the glittering offices of the Opportunity Bank, cafés with names such as Le Cap D'Antib (sic) and billboards advertising the luxury life you can enjoy after you visit this or that casino.

The 2006 referendum severed the frail political connection that Montenegro had with Serbia and the country unilaterally adopted the euro as its national currency. 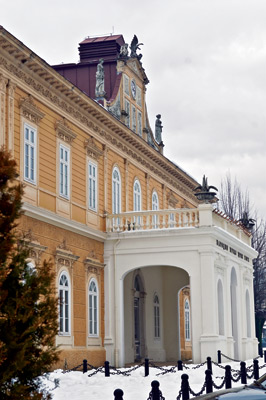 Cetinje remains a city of surprises, however. The posthumous fate of Prince-Bishop Peter II is quite telling. Shortly before dying of tuberculosis in 1851, the author of the most nationalistic Serbian poem, "The Mountain Wreath," wished he might be buried in the chapel on the very top of Mount Lovćen – so he could see all the Serbian lands from there. His wish came true only in 1855, because the Montenegrins were afraid that his grave would be desecrated by the Ottomans. Their fears were not entirely unfounded but only became a reality later, in the First World War. During the Austro-Hungarian occupation, the chapel was destroyed and the remains of Peter II were moved to Cetinje. Later, the church was restored and his body reburied in it, in 1924. 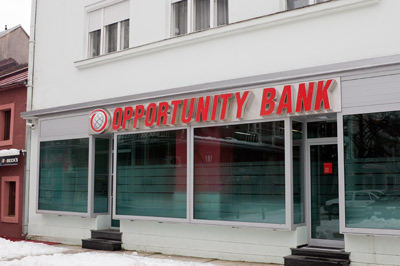 In 2006 Montenegro unilaterally adopted the euro as its national currency

He did not rest in peace for very long. The Yugoslav authorities demolished the chapel because they found it too religious. In 1969, they built a secular, rather nationalistic mausoleum on its site. Peter II lies within, guarded by a couple of mighty statues of warriors.

He would hardly be happy with this turn of events. It is true that he brought the first billiards table to Montenegro (his palace is still known as Biljarda) and never hesitated to chop off an Ottoman head, but he was a bishop after all.