© Anthony Georgieff
Visit the oil-wrestling festival in Kırkpınar, near Edirne, and you'll find out why Dave Freeman has included it in his "100 Things To Do Before You Die"

It is always embarrassing to see a grown man cry. But at the oil-wrestling tournament in Kırkpınar, a suburb of Edirne – just a few miles from the Bulgarian border, you will have to endure it. You will see hundreds of men of all shapes and sizes, from hefty fellows to beardless boys and sturdy youths alike, weeping on the oilsoaked grass of the stadium.

Their tears mingle with the olive oil that oozes from their hair, covers their foreheads, soaks their eyebrows and drips into their eyes. The pehlivans, as the wrestlers are called, try to dry their tears – and the oil too – with the bits of cloth the referee begins to hand out the moment he announces the winner of the wrestling match. But neither the tears of the loser nor the happiness of the winner, who has taken another step towards the title of baş pehlivan, or champion, can be concealed. 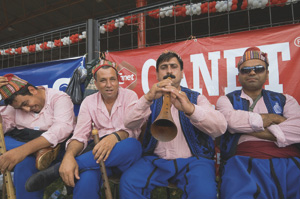 Yağlı güreş, or oil wrestling, is one of the oldest sports in the world. It is believed to have appeared in the 10th or 11th Century, a blend of elements from classical Greek wrestling and the long-standing traditions of Persian and Turkic wrestling. But the wrestling tournament in Kırkpınar is a grandiose spectacle and the largest such event in Turkey. Finalists usually parade before the president of the republic and attract huge media coverage. People arrive from all over Turkey and the neighbouring countries to see which one of the 1,000 or so contestants will become baş pehlivan that year. 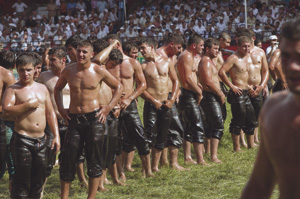 The quiet Saray Içi islet in the Kırkpınar suburb comes alive with the stalls of halva, cheese pie, T-shirt and towel sellers, and cafés. The monument to the soldiers who died in the 1912–1913 Balkan Wars and the ruins of the sultan's summer hunting residence, which are just across the Tundzha River from the stadium, are crowded with curious visitors. Queues form in front of the open-air prayer site. The nearby meadows are dotted with parked cars. Hotel rooms are at a premium. And on the grass, especially on the day of the finals, the reporters outnumber the contestants.

They have all come for the oldest uninterrupted sports event in the world.

It is true that the Hellenic Olympiad goes further back in antiquity. But from 393, when it was banned by the devoutly Christian Emperor Theodosius the Great, until 1896, when it was revived by Baron Pierre de Coubertin, it was simply a popular history book curiosity.

The oil-wrestling tournament in Edirne has been held since 1362 with only occasional breaks, mainly because of wars such as the siege of Edirne by the Bulgarian army in the First Balkan War.

Ironically, the yağlı güreş tradition began during a war.

In the mid-14th Century, the Ottomans put down permanent roots on European soil. However, the Bulgarians, Serbs and Byzantines paid no special attention to them. They were too busy with the age-old feud among themselves and remained unaware that a common enemy was on their doorstep.

In 1362, that enemy knocked on their doors. Sultan Orhan's army besieged Adrianople in Thrace. Since the time of the Romans, who actually built it, the city had been a major stronghold on the Trans-Balkan route known as the Via Diagonalis. It stood only 200 km, or 125 miles, from Constantinople and provided a key avenue of approach to the Balkan peninsula and Central Europe. Three years later Adrianople fell. The Ottomans renamed it Edirne and made it their capital until 1453, when they settled in Constantinople.

Something else happened while the siege lasted. The true facts are not very clear, being the stuff of several different legends but here, more or less, is what took place: 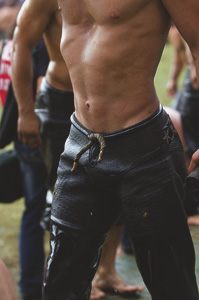 During a respite between the battles, the sultan and his brother decided to enjoy themselves with oil wrestling. Only two of the initial 40 warriors made it to the final round. They were either brothers or very close friends. What matters is that neither could defeat the other. The sultan stopped the match and ordered it to be continued during the forthcoming spring holiday. The winner would achieve fame and a brand new kispet, or wrestler's trousers, made from the hide of a water buffalo.

The holiday arrived, the crowds gathered but the wrestlers again found themselves locked in a position where neither could win. There they stood, head to head, leaning against each other, their feet firmly planted on the ground and their hands gripping their opponent's shoulders. Perfectly balanced, neither could find the strength to topple the other. There they stood in the blistering sun and there they still were when the first stars appeared. As night fell, they both breathed their last.

Their friends buried them on the same site where they had wrestled, under an old fig tree. Then they continued their battle for Adrianople. When they took the city, they returned to the grave and saw that 40 fountains had sprung from the ground. They called the place Kırkpınar, or the 40 springs, and began meeting there every year to hold oil wrestling championships in memory of those heroes.

Today's pehlivans have a different motivation to smear their bodies with oil and become part of this eccentric competition. The baş pehlivan wins not only glory, but a prize of about $100,000. It is also the pursuit of fame that inspires wealthy Turks to bid in an auction for the title of aga. The highest bidder gets the right to pay all the expenses for running the tournament – from the prizes to the dinners and festivities. In return, the aga sits in the grandstand, next to the president of the republic and Edirne's mayor, and has the right to stop a match and disqualify wrestlers, if necessary. 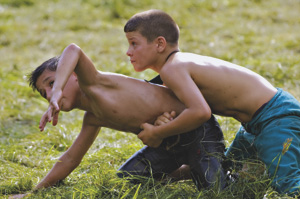 Oil wrestling follows rules that do not exist anywhere else in the world. Contestants are drenched with olive oil from head to toe and are naked – apart from the 13 kg kispet. The rules are complex. There are about ten ways to win, and one of them, the most spectacular, would certainly lead to the disqualification of a Greco-Roman style wrestler.

In this trick, one of the contestants manages to get hold of his rival's trousers at the waist and put his arm inside up to the elbow. Thus he can get a good grip and throw his slippery opponent.

Sometimes it becomes even more interesting. Strong as the trousers are, they occasionally get torn. The wrestler has the right to exchange his kispet for a new pair, but only if he does not take longer than 10 minutes.

If, however, his opponent has managed to tear his kispet above the crotch, he loses the match.

Oil wrestling in Kırkpınar owes at least half of its spectacular effect to olive oil. According to the ancient Greek ritual, it forms a thin film all over the body and trousers of the contestant and turns every attempt to 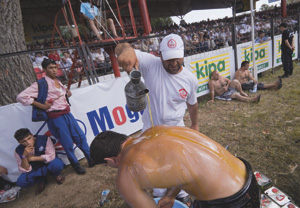 grab him into a greasy nightmare.

For this reason, oil is literally all over the field. Special employees dressed in imitation Ottoman uniforms pour it from five-litre cans into pitchers. These they empty over the heads and bodies of the contestants who are about to begin their match. The grass is drenched with olive oil and the soil becomes a greasy, gooey mass. Mud is everywhere and the olive oil fills the air with its sweet scent, successfully masking the smell of leather and sweat coming from the men, who wrestle in temperatures of over 40°C, or 104°F.

Kırkpınar's yağlı güreş is, however, an experience for all the senses. "Pehlivan, pehlivan! Baş pehlivan," the commentator shouts into the microphone and his voice reverberates all over the surrounding area. Its decibels compete with the music of the band at one end of the stadium, the shouts of the wrestlers greeting the spectators and the cheers of the spectators when they spot their favourites.

Like any other ancient sports event, the oilwrestling tournament in Kırkpınar also has its own well-established ritual. All the participants, from referees to musicians alike, wear Ottoman style clothes. There is also the sometimes energetic, sometimes lugubrious music of the band, which does not stop playing as long as there are pehlivans on the field. The beat of the davul drums and the shrieks of the zurna flutes mingle rhythmically with the moves, feints and tricks of the contestants.

Before the matches start, the pehlivans have to greet one another. The opponents line up at the two opposite ends of the stadium. Oily and still fresh, they stride across the grass, slapping their thighs with open hands. They limber up ostentatiously and then go to meet their opponent. Before they grab each other's greasy bodies, they again perform a courtesy ritual – they pat their rival's head.

Before 1975, there was no time limit to wrestling matches in Kırkpınar. Sometimes the pehlivans would wrestle for up to two days, but this is not the case today. Contenders for the baş pehlivan title have 40 minutes to defeat their opponent. If there is no winner, they are given some extra time. If the victor is still unclear, the judge raises the arm of the wrestler who has scored more points. 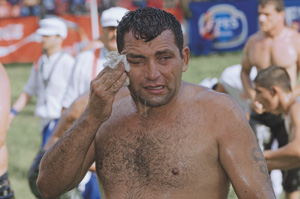 This is when the tears well up.

The defeated men literally collapse on the ground and need help – usually the outstretched hand of their rival – to stand up and muster enough strength to pick up a piece of cloth and wipe the oil from their eyes.

While the winners await their next opponents, the losers take to the fountains at one end of the field. There, under the compassionate gaze of the elderly men in the audience and the awe-struck boys sitting on the fence, they splash water all over their bodies. They duck their heads under the spout, then untie their kispet and rinse their trousers under the stream.

Once cooled off, the losers do not leave but, sprawling exhausted at the end of the field, continue watching the tournament.

Each of them has already undergone a demanding period of apprenticeship with the local baş pehlivan and taken part in strenuous qualification matches in his native place before he can be declared worthy of going to Kırkpınar. Now he has lost much.

Pehlivans may be emotional, but they are not the kind of people who are discouraged by failure. Most of them will be back next year to have another go at pursuing the glorious title of baş pehlivan.

The tournament winner also returns to Kırkpınar. But he has another dream. The wrestler who becomes a baş pehlivan for three consecutive years gets a 1.5 kg belt of leather and gold.

Only someone who has experienced this whole drama, even as a spectator, can realise why Dave Freeman has included the oil-wrestling tournament in Kırkpınar in his legendary "100 Things To Do Before You Die" list.