ALL YE WHO ENTER HERE

Ironically, the tour of Hades ends at St John Prodromos, an Orthodox chapel named after the saint who had predicted the demise of paganism © Anthony Georgieff

Leave two euros behind. This is the entrance fee for the Nekromanteion of Ephyra, the best known gateway to the underworld and оracle of the dead in antiquity

The entrance is a bit of a disappointment. When you are heading for the famous shrine of Hades, where people from throughout the ancient world flocked to talk to their dead, you expect something more dramatic. At any rate, Odysseus, Orpheus, Heracles and Theseus, who all entered the Kingdom of the Dead, did not pass through a common steel-barred door. The modest notice "The Nekromanteion of Hades" does not befit the dark glory of the site either. The composition of the text should have been entrusted to someone who has read Dante and taken note of the warning that hangs on the gates of Hell, according to his Inferno: "Abandon hope, all ye who enter here.

The best account of the oracle is also the oldest indication of its existence. Homer may have been blind, but he put a topographically accurate description of the locality in the mouth of the enchantress Circe in the Odyssey: "But once your ship crosses flowing Oceanus, drag it ashore at Persephone's groves, on the level beach, where tall poplars grow, willows shed their fruit, right beside deep swirling Oceanus," Circe told Odysseus. "Then you must go to Hades' murky home. There Periphlegethon and Cocytus, a stream which branches off the river Styx, flow into Acheron. There's a boulder where these two foaming rivers meet. Go there, heroic man, and follow my instructions. There many spirits will emerge – they're the shadows of the dead." 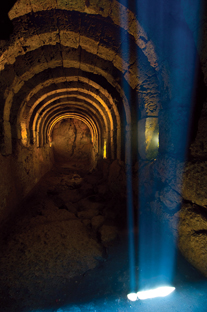 Visitors could meet the dead in an underground hall

Apart from the manifest absence of a host of ghosts, the Nekromanteion and its environs still match Homer's description. The hill of the oracle rises beside the village of Mesopotamos on the Epirus plain. It is visible even from the road between Igoumenitsa and Preveza. The Acheron River still flows from the nearby slopes of Mount Pindus, though now it is called the Acherondas. It still winds through dramatic gorges and disappears underground, only to emerge again. Thousands of years ago, this feature made people believe that the river was a gateway to the underworld. When it enters the plain – true to Homer's description – the Acherondas flows into the Acherousian Lake, together with the Cocytus and the Periphlegethon. There, according to the ancients, Charon, the boatman, transported the shades of the dead to the Kingdom of Hades – for the sum of one obolus.

The lake is now dry and resembles a swamp and the keeper of the Nekromanteion has little in common with Charon. He is one of those elderly men who would be happy sitting on a bench in a village square in Pindus in the early afternoon, playing with his worry beads, drinking coffee, tsipouro and retsina and chatting with his companions till late in the evening. Just like Charon, however, this keeper will sell you an entrance ticket – for the sum of two euros.

"Nekromanteion" means an "oracle of the dead." It may be all in the mind, but with each step beyond the keeper's booth the site begins to look more and more like its name and fame. The atmosphere is spooky, even when there is not a single cloud in the sky and the temperature is around 38ºС. The eclectic ruins enhance the atmosphere of unreality. Sticking up above the mighty wall made of large, irregular shaped stones that protected the sanctuary is a bell tower.

The Monastery of Aghios Ioannis Prodromus, or St John the Baptist, appeared in the 18th Century. The tendency of people to change their religious beliefs but not the places they regard as holy is nothing new. There are thousands of examples. In Athens, the Parthenon on the Acropolis was converted into a Christian church dedicated to the Virgin Mary, and some village churches in the Strandzha have altars that were formerly pagan sacrificial stones. 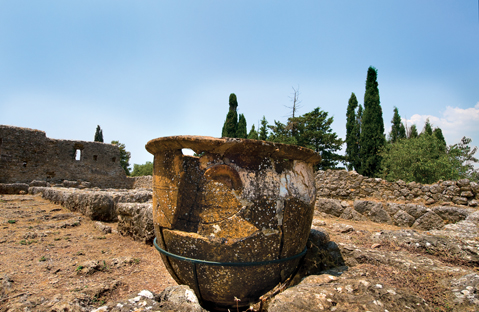 But the Nekromanteion is a special case. The monastery was not built on the site of the oracle to help the local people exchange Hades for Christ more quickly. Unlike other famous divination sites, such as those at Delphi or the nearby Dodona, the Nekromanteion was not destroyed at the end of the 4th Century. It stopped welcoming visitors as early as 167 BC, because of the Romans. When they conquered Epirus, they wreaked such destruction that all the inhabitants fled. For centuries, nobody felt like contacting the dead. There was death all around, anyway.

And when did it all begin? The three Mycenaean children's graves reveal that the hill was connected to a cult for the dead as early as 1600–1100 BC. In those days, there was also a sanctuary to the Mother Goddess, who, by definition, was responsible for the afterlife. The Odyssey shows that the hill already had an oracle to the dead in the 8th Century BC.

The ruins you enter when you pass through the gate in the stone wall are much newer. Archaeologists think they date from the 4th Century BC.

Back then, the oracle was flourishing. The ancient world was obsessed with the idea of the nether world and views on what happened after life were changing. In Homer's time, the Hellenes believed that every dead man turned into an incorporeal shadow with no memories, who lived an unhappy life in the Kingdom of Hades. For this reason, Odysseus, who wanted to bring back the memory of the dead soothsayer Teiresias, had to perform a terrifying ritual. He dug a hole in the ground with his sword. Into it he poured libations, first milk and honey, then sweet wine and water. He then shook in some barley and then sacrificed a black ewe. The blood of the animal trickled down the hole and the shadows of the dead rushed to it, because only if they drank from it could they remember who they were. But Odysseus chased them away with his sword because he needed to keep the blood for Teiresias. After their conversation, Odysseus gave some of the blood to his dead friends and relatives too. One of them was Achilles. The dead hero, who had chosen a glorious early death to a long and boring life, said: "I'd rather live working as a wage-labourer for hire by some other man, one who had no land and not much in the way of livelihood, than lord it over all the wasted dead."

Around the 4th Century BC, ideas about the netherworld underwent a change. The Elysian fields, where, according to Homer and Hesiod, Zeus's mortal children lived in bliss, became overpopulated. People started to believe that they were also the final abode of those who had lived a godly life, or who had been initiated into the mystery religions such as those of the Great Gods in Samothrace and Demeter and Persephone in Eleusis. 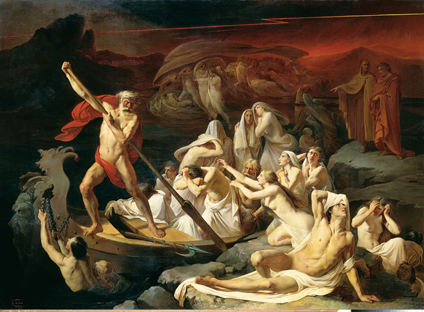 As a consequence, there was increased interest in the Nekromanteion, and the priests took full advantage of this. They compelled the supplicants to sleep in the oracle for several nights before they could address Hades. During this time, they were subjected to special diets and psychological tricks to prepare them for the experience. On the big day, the supplicant went blindfolded down a maze of corridors, the same ones you walk along nowadays. The air was permeated with narcotic substances, sulphur and chanting. Several times, the supplicant came to closed doors. To open them, he was asked mystical questions to which he gave mystical answers. At the end of the corridor, the floor under his feet disappeared – and he ended up in an underground cave. There, in the passageway to Hades, the dead stood waiting for him…

The disoriented visitor did not realise that he had entered a shrewdly constructed underground chamber that made use of one of the technological wonders of the time: a platform operated by a system of pulleys. Similar ones were used in theatres to produce a god on stage and achieve the stunning and unexpected turn of fate that could resolve even the most intricate plot: a dramatic technique called deus ex machina.

The chamber of Hades and Persephone is still there but all that remains of the platform are a few serrated wheels. You now descend using a mundane, shaky metal staircase. However, you will still get the creeps. It is deadly cold, the air damp and the lighting mysterious.

The Nekromanteion boasts an impressive list of eminent visitors. Here Orpheus started his descent into Hades to beseech the god for the soul of his young wife Eurydice. Heracles braved it for his final, twelfth labour – the capture of Cerberus, the dog who guarded the underworld. Theseus and his friend Pirithos also passed through it in their attempt to kidnap Persephone.

Ordinary mortals only visited to seek advice. The best-known client of the sanctuary was Periander, the tyrant of Corinth (c. 628–588 BC). Considered one of the Seven Wise Men of Greece and the author of nearly 2,000 philosophical verses, he came to ask the oracle's advice on a rather impertinent matter. Periander wanted the spirit of his dead wife Melissa to tell him where a friend of theirs had hidden his treasure.

Melissa refused to talk to his delegation. She had good reason. Periander had loved her too passionately and, after believing rumours questioning her fidelity, he killed her while she was pregnant with their third child. He then raped her.

Melissa got her own back on him. "I can't talk. I am cold and naked. My husband put all his loaves into a cold oven," she told the envoys. Periander understood what that was supposed to mean. Melissa was hinting that his indecent behaviour had invalidated her burial rite. She had no clothes to wear in the world of the dead.

According to Herodotus, Periander came up with a spectacular solution. He invited all the women of Corinth to a festival and assembled them all in the local temple of Hera. There he made them strip off their clothes and burnt them as an extravagant posthumous gift to Melissa.

Herodotus does not say whether Periander's dead wife revealed where the treasure was. After all, what is an oracle without secrets?