Rising out of the waves of the Aegean just two hours by ferry from Alexandroupoli, Samothrace is the answer to the most puzzling Greek paradox: where can you find an island with an idyllic landscape, dramatic mountains, a classical past, friendly locals and excellent beaches - and no tourists?

Actually, there are a few tourists there, especially during the high season. Yet even during the peak of the summer holidays you won't find a trace of the frenzied packs of foreigners who invade Santorini and Crete. Visit during spring or autumn and you'll discover you are only sharing the island with its 2,723 inhabitants - and an unspecified number of goats, who graze on its mountainous slopes.

Unlike modern-day mortals, the ancient gods did not ignore Samothrace. Homer tells us that Poseidon watched the Battles of Troy from Mt Fengari's 1,611 m, or 5,285 ft, peak. He picked a good vantage point - it is the highest mountain in the Aegean Sea and lies a mere 80 km, or 50 miles, from Troy. 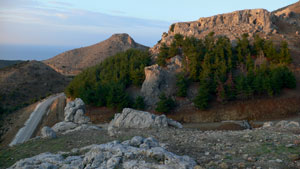 Over the centuries, the name Samothrace was also connected with other deities - the Cabeiri. They were the gods of fertility and the underworld in the pre-Hellenic epoch before Greek colonists from Samos ousted the locals - who were either Thracians, Pelasgians or Carians, depending on which theory you subscribe to. The Sanctuary of the Great Samothracian Gods Axieros, Axiokersos, Axiokersa and Kadmylos, however, was famous throughout the ancient world precisely because of the Greeks. And that's more or less all the historians know about it. The Cult of the Great Gods required initiates to guard its rituals and their meaning with the utmost secrecy, thus everything you hear about them now is more or less speculation. 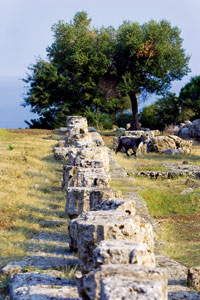 At the end of the 4th Century, worshippers abandoned the Sanctuary of the Great Gods

The ruins of the sanctuary on Samothrace's northern shore, however, are very real - even if they look like something out of an idyllic landscape by Poussin. The half-collapsedstone walls, the reliefs of dancing girls worn away by time and the columns that stubbornly refuse to give in to gravity would look even more romantic if the Winged Victory were still there.

When the statue of the Winged Victory appeared on a pedestal in the sanctuary 2,200 years ago resembling the figurehead of a ship, it celebrated an important naval victory. The name of the general in whose honour the statue was raised has long been forgotten. According to the museum located near the ruins, the hero in question was Demetrius I Poliorcetes, one of Alexander the Great's descendents.

In the following centuries the Samothrace Sanctuary was gradually abandoned. Christianity arrived, followed by the Genoans, the Venetians and the Ottomans, who left the Parian marble statue in relative peace and quiet - it only lost its head. In 1863, however, one of those events occurred, thanks to which priceless parts of Greece's cultural heritage such as the reliefs from the Parthenon can now be found in foreign museums. French consul and amateur archaeologist Charles Champoiseau “discovered” the Winged Victory and in the very same year sent it back to his homeland. Since 1884 Nike has graced the halls of the Louvre and has become - along with the Mona Lisa and the Venus de Milo - one of the three must see exhibits for every first-time visitor to the gallery.

You'll hardly feel the statue's absence in Samothrace, however. It has been multiplied in hundreds of plaster statuettes of various sizes and functions, ranging from souvenirs to house decorations to the main attraction on the coast road in Kamariotissa, the island's only harbour. Dramatic Mount Fengari, whose peak is usually hidden in the clouds, as well as the columns of the sanctuary and the mediaeval towers at its foot are the first things that catch your eye as you approach Samothrace by ferry. Kamariotissa, however, is the first place that gives you a taste of island life.

Life on Samothrace is extremely pleasant - this is what any visitor realises as soon as he has taken a couple steps down the gangplank and into Kamariotissa. The waterfront and several nearby streets are lined with hotels, taverns, stores and bakeries. The streets are especially lively when the ferry boat arrives, after Sunday Mass or around 9 pm any day of the week, when locals and tourists alike head out for dinner.

Certain hedonists claim that even if Samothrace was deserted, flat, ugly and devoid of ambience, it would still be worth taking the ferry from Alexandroupoli there just for the food. Samothrace's pubs offer the invariable - and invariably delicious - Greek salad, yellowish bread with a dark brown crust, roe spread, tart olives, aubergine drenched in olive oil, sliced goat and sheep cheese, octopus, calamari, every kind of fish in the sea, and retsina in half-litre tankards. The local taverns, however, serve something you won't find anywhere else in Greece: Katsiki, or kid-goat, roasted whole on a skewer until it is crispy on the outside and tender on the inside. The usual garnish is rice with offal. 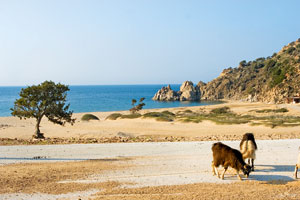 The island's two major beaches are Pahia Amos and Kipos

Fortunately, Samothrace is not deserted, flat, ugly or devoid of ambience. Despite being barely 178 sq km, or 69 sq miles, the island has a rolling rocky terrain covered in olive groves, isolated hamlets and winding roads, which make travel by car recommended - if not necessary. At the very least a vehicle will save you time and energy, which you can then spend exploring the sanctuary or heading upriver along the Fonias. Its waterfalls and refreshing pools are a treat reserved only for those in good shape - and risktakers who don't mind clambering up steep heights.

A car - if on the larger side - however, may turn out to be a problem if you visit Chora. Samothrace's administrative centre is perched on Fengari's slopes and its picturesque jumble of houses creates a labyrinth of steep and narrow streets, whose sharp turns outnumber the seagulls in the sky. If you don't want to get stuck on one of the hairpin bends, better to park lower down.

You also won't need a car to explore the beaches tucked into the dozens of rocky coves that the Aegean Sea has carved into Fengari's vertical cliffs. You will need a boat, though, since there are no roads leading there. If you don't want to risk the open sea, never fear, all is not lost. Two of the island's most beautiful beaches - the sandy Pahia Amos on the southern coast and Kipos, a stretch on the southeast shoreline covered with white pebbles - can be reached by a normal road.

Of course, “normal” in this case is a relative term. Especially if you're going to Kipos. As you follow the road around the northern coast of the island near the sanctuary, the mediaeval ruins of Paleopolis and the mineral springs at Therma, you won't run into any trouble. Gradually, however, the road
rises and when you turn south, you'll be treated to a stunning view of Fengari, which drops sharply into the sea. If you're not careful, you could, too - which would be a shame, since you'd miss Kipos, which lies right at the foot of the mountain.

Enjoy the crystal-clear water and check out the fish swimming around you. Listen for the sound of bells from the sheep and goat herds on the nearby slope. When you get back from this idyllic holiday, feel free to write us an angry letter complaining that we spilled the beans about this quiet island, which was until now reserved for a few lucky mortals and a few forgotten gods.


HOW TO GET THERE

The easiest way to reach Alexandroupoli, located on the Aegean Sea, is to follow the coast road or to head south from the Bulgarian border checkpoint at Svilengrad- Dikea. From Alexandropouli, take the ferry to the island. The schedule changes, so be sure to check it in advance at: www. samothraki.com/htm/indexf_e.htm. The most important thing to remember is not to arrive on a Monday - the ferry doesn't run that day.


10 Must Do's in Samothrace
Try not to miss the ferryboat from Alexandroupoli - the schedules are whimsical and the eating/drinking scene around the ferry terminal lively.

While you're on deck, keep your eyes peeled. Sometimes dolphins play in the boat's wake.

Discover the differences between the Met in New York and the Samothrace Archaeological Museum, which was modelled after it.

Count the Venetian and Genoan towers still standing on the island's western and northern coasts.

Feel the wind on the island's westernmost point - the Akrotiri Peninsula. The sensation is all the more pleasant thanks to the view of Kamariotissa and Fengari.

Think you're in shape? Put on your hiking boots and hit the trails that crisscross the mountain.

Cross your fingers that the clouds will clear and you'll see Fengari's peak.

Indulge in an impromptu spa procedure at the 40°C, or 104°F, mineral springs at Therma.

Feed the cats. In Kamariotissa there is a lively feline colony that is exceptionally talented at begging food from tavern patrons. As hungry as you may be, it'll be hard to savour your supper if you don't share your calamari and kid with the local kitties.

We had to say this: Try to miss the ferryboat from Kamariotissa and spend another day on Samothrace.