© Anthony Georgieff
What do agent 007, Umberto Eco, the Belgrade Forest and a couple hundred carp have in common? The Basilica Cistern in Istanbul
The forces of Ottoman Sultan Mehmed II – whose victory over the Byzantines earned him the epithet “The Conqueror” – ﬁnally broke through Constantinople's fortress walls on 29 May 1453 and ﬂooded through the streets of the defeated city. Swarming into the square in front of the Hagia Sophia Church, they battered down its doors, driving out the Byzantines who had sought refuge inside like a herd of terriﬁed sheep. Only a few metres away and beneath the surface where these dramatic events were taking place, all was quiet.
The only sounds breaking the silence of the enormous 80,000 litre underground cistern were the anxious whispers of the handful of Byzantines lucky enough to know about its secret entrance. They emerged from their hiding place only when they were absolutely sure that Mehmed II's pledge not to harm the city's inhabitants was more than just an empty promise. It wasn't long before the city's new rulers discovered the cistern near Hagia Sophia.
When they ﬁrst stumbled upon this underground wonder, they were ill prepared for the sight of one of the most impressive reservoirs in the history of engineering. Their torches feebly illuminated only a fraction of the dark expanse, revealing a dense and seemingly endless forest of green marble columns that trailed off into the blackness. Only the occasional ﬂash of a blind carp's silvery back rippled the reﬂection of these slimy “trees” on the water's inky surface. The Ottomans came up with a name worthy of this amazing reservoir: Yerebatan Sarayı, or the Sunken Palace – then promptly forgot about its existence.

Today it is known as the Basilica Cistern due to its many rows of columns. Despite its infectious proximity to Sultan Ahmet Square and must-see tourist attractions such as Hagia Sophia, the Blue Mosque, and the Hippodrome with its obelisk of Tuthmosis III and the famous Serpent Column, the reservoir is nevertheless a relatively peaceful place. And peace and quiet – but of a rather different sort – were exactly what the emperors Constantine the Great and Justinian I had in mind when they ordered its construction. When Constantine moved his capital city from Rome to Constantinople on the Bosporus in 330 AD, he was very aware of the dangers facing the city that bore his name.
“Barbarians” from the north, east and south continually tried to snatch territory away from the failing empire, while the most brazen among them dreamed of capturing the capital city itself and its vast treasures. Situated on a peninsula, Constantinople was easy to defend. Its Achilles' heel, however, was its lack of a natural water supply; during an extended siege, the city's most deadly enemy was thirst.
For this reason, the emperor's engineers advised him to order the construction of a huge underground cistern to store water from springs in the Belgrade Forest, which was transported to the city via a 19 km, or 10.5 mile, aqueduct. The Basilica Cistern, which is entered through a scarcely noticeable door, is not the cistern built by Constantine, however. Two centuries later the city's population swelled to 500,000 and the emperor's reservoir could no longer slake their thirst. In 532, following the Nika riots that destroyed much of Constantinople, the emperor Justinian I took the problem to heart, placing the construction of an underground cistern at the top of his to-do list (well, perhaps second on the list after the construction of Hagia Sophia). 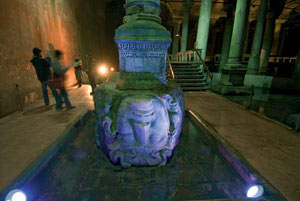 Constantine's cistern was expanded to 138 m by 64 m, or 453 ft by 210 ft, and reached a depth of 25 m, or 82 ft. Each wall was insulated with a 4 m, or 13 ft, layer of brick. The groin vaults of the brick ceiling were supported by 336 marble columns with Doric, Ionic, and Corinthian capitals, arranged in 12 rows of 28 columns apiece. Most stand approximately 9 m, or 30 ft, high (the builders made up for differences in height by using bases of different sizes).

Every one of the columns was taken from the ruins of buildings remaining from the years before Byzantium became Constantinople. Ironically, the carefree pragmatism of Justinian's builders, who saved themselves the trouble of building new columns, inadvertently preserved the only traces of these early Byzantine structures, which have long since fallen into ruins. The cistern near Hagia Sophia was by no means Constantinople's only reservoir. The famous Binbirdirek Cistern, or the Cistern of a Thousand and One Columns, also dates from the time of Justinian. With a capacity of 50,000 cubic metres and 224 columns, it is second in size only to the Basilica Cistern, but unfortunately is not open to the public.

After 1453 the cisterns gradually sank into oblivion, and houses were built over them. Legend has it that for some time they were used to water the Sultan's garden at the Topkapı Palace. When in 1563 Sultan Suleiman the Magniﬁ cent unveiled the Uzun, or Long Aqueduct, designed by the famous architect Mimar Sinan, the Basilica Cistern had long since outlived its usefulness. In 1545 the Frenchman Petrus Gyllius, also known as Pierre Gilles, became the ﬁrst Westerner to see the cistern.

At that point, it was only used by the people living directly above it, who had drilled holes in its ceiling to use as wells. The more adventurous ones among them even went down into the cistern itself where they used small boats to catch the unsuspecting carp swimming in its murky waters. 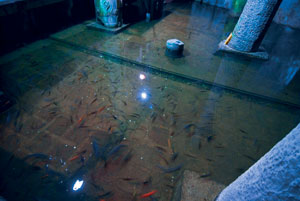 The cistern remained closed to the public until 1989. During the two-year restoration process, 50,000 tonnes of mud and debris were hauled out of its depths and seven of the columns were bricked up in order to reinforce the construction. The reservoir's ﬁrst visitors explored its passageways in boats; now, however, wooden walkways guide tourists past the Sunken Palace's main attractions. The Peacock-eyed Column certainly ranks among the cistern's highlights, but when it comes to the bizarre, two columns at the end of the walkway beat it hands down. Slender and more exquisitely carved than the others, this pair is also signiﬁcantly shorter.

The lack of length didn't faze the Byzantine builders, however, who simply propped them up on two gigantic stone heads of Medusa, one lying on its right side, and the other completely upside down. This makes for a creepy – and rather depressing – sight. Way back when the city was still known as Byzantion, these heads adorned enormous civic or religious buildings. The ancient Greeks, who introduced this architectural trend, believed that these Medusa heads with their terrifying protruding tongues and snaky hair protected the building and the people in it from evil. When Christianity became the sole ofﬁcial religion, however, the people decided they no longer needed such watchdogs. The Medusas that once adorned the heights of ancient temples now found themselves – literally – hitting rock bottom.
Adding insult to injury, nobody even thought to set these erstwhile guardians the right way up. Two visitors who threaded their way through the Basilica Cistern, however, were not there to admire the fallen Medusas or the Peacock-eyed Column. Nor were they interested in expanding their minds with foreign culture, nor even in having a good time. To them the reservoir was simply a safe and direct way across the city. 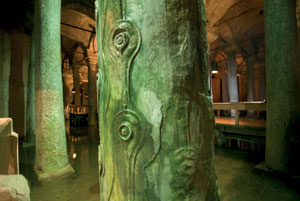 In 1204, while the knights from the Fourth Crusade pillaged Constantinople, Baudolino passed unharmed underground. Umberto Eco's hero and his companion, the court historian Niketas Choniates, crossed the cistern on foot to escape the carnage. The water only reached their knees, since most had been drained to ﬁght the ﬁres raging on the city's surface. Entering the reservoir through a secret entrance in Hagia Sophia's Sweating Column, the pair reached the safety of the harbour district Neorion.

Seven hundred and ﬁfty years later, James Bond also made a trip through the cistern, whose water during the Cold War and in From Russia with Love was plenty deep and teeming with sewer rats. Not in the mood for a swim, Agent 007 and his Turkish sidekick took a boat from a secret door in the Kapali Charshi, or Grand Bazaar, to the periscope that, as luck would have it, gave him a peek into the inner sanctum of the Soviet Consulate in Istanbul. Not surprisingly, Bond's route is just as fanciful as Baudolino's.

The Soviet Consulate, now the Russian Consulate, is in fact located on the opposite shore of the Golden Horn in Beyoglu. The cistern's secret entrances are also a ﬁgment of creative imaginations. So forget the rats and hidden passages; all you really have to do to reach the Sunken Palace is pay 10 Turkish lira at the door.
Read 29270 times Last modified on Tuesday, 15 March 2016 13:20
Published in Foreign Travel
More in this category: « HIDDEN ISLAND ZAGREB »