© Anthony Georgieff
Escape the tourist hordes and enjoy waterfalls, canals and calm in this northern Greek town
Try recalling every stereotype you've known about mass tourism in Greece and then imagine what could be the opposite. Now open your eyes. What you see is Edessa.

Edessa resists any "hidden treasure" cliché. This town of 20,000, in the region of Macedonia, is among the last places untainted by mass tourism, a fact appreciated by travellers who look for authentic Greek landscape, atmosphere and calm.

Perched on a steep plateau, Edessa soars 70 m, or 230 ft, above the surrounding plains. Its name dates back to Antiquity, when the town was one of the capitals of the Macedonian kingdom. During the Middle Ages, however, people called it by its Slavic name, Voden, which endured until 1912 when the Greeks wrested the town from the Ottomans. At that time a significant portion of the local population was neither Greek nor Ottoman – the Serbs claim it was Serbian, the Macedonians Macedonian and the Bulgarians Bulgarian. Today the majority of Greeks in Edessa descend from Asia Minor emigrants.

Both Edessa and Voden mean "City of Water" and indeed hardly a more appropriate name can be found for a town surrounded by dozens of rivers producing spectacular waterfalls. 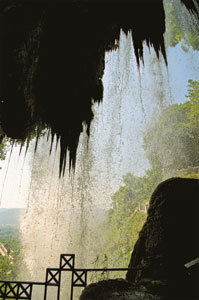 If you had visited Edessa before the 15th Century, you would have seen no waterfalls, but only a lake at the plateau's peak. But then it overflowed, giving birth to rivers and waterfalls. For the locals these were more than just a picturesque backdrop that brought cool relief in the summer and life-giving moisture. They used the water to power mills and factories, and this eventually transformed Edessa into an industrial centre, and it remained such until the German occupation in 1940.

The Karonos Waterfall is the chief attraction for visitors to Edessa, and to make the experience comfortable and safe the town council has built stairs, paths, amphitheatre benches and creative lighting.

For the best views, visit early in the morning and stand on the path between the water and the cliff. In the late morning the sunshine glimmers behind the wall of water, turning every drop into a prism through which a myriad of rainbows glow. 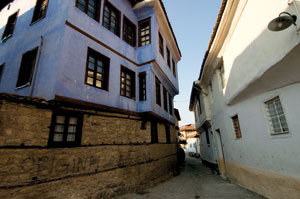 Edessa is a couple of thousand years old, but Varosi is the only functioning historical quarter, and it is from the Ottoman period. In 1944 the Germans attacked it in an attempt to flush out Greek guerrillas who used Varosi as a base. Take the time to get lost in its winding streets and labyrinth of houses. 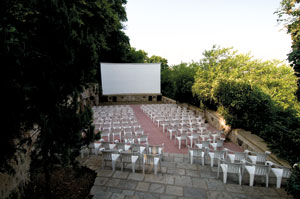 An outdoor cinema lives on in the city park. It is part of the town council's plan to transform Edessa into a popular tourist destination under the Museum of Water brand. Some of the water mills have been restored, and you can also find water mirrors as well as a freshwater aquarium whose working hours, unfortunately, are hard to figure out. 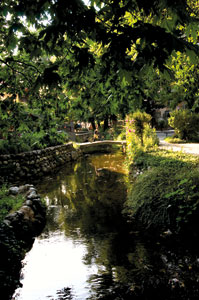 The streams that crisscross the town make Edessa a pleasant version of Amsterdam – a town of pedestrians and bike riders, of little houses with gardens on the riverbanks and of romantic bridges. Unlike Amsterdam, however, Edessa's canals don't reek, the few tourists are well behaved and residents in the riverfront houses live quietly. Perhaps this peaceful picture will make you run to the nearest real estate agency to become part of the idyll. 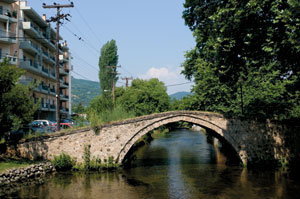 In the Bulgarian part of the Rhodope, the locals still call the arched Ottoman bridges Roman. In Edessa the Byzantines are credited for the Ottoman bridge over one of the rivers. The bridge is one of the few remaining traces of Ottoman presence in the town. Another is the Geni Tzami Mosque, which now houses a collection of architectural finds excavated from ancient Edessa. 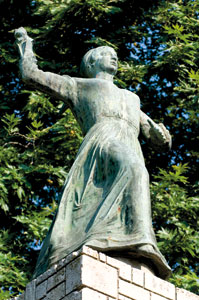 As you're wandering through the residential areas in the centre, you'll come across a small square housing the local Statue of Liberty. Four bronze reliefs of hoplites, or ancient Greek warriors, Byzantine soldiers, anti-Ottoman rebels and anti-Nazi guerrillas synthesise Edessa's military history. The Romans battled the Greeks from 168 to 130 BC for control of the town. In the 11th Century the Byzantines fought with the Bulgarian King Samuil and his successors, and later also with the Serbians, who seized Edessa at the end of the 14th Century. Under Ottoman rule, local rebels, known as andarti, joined the struggle for independence in 1821. From 1904 to 1908 they simultaneously fought with the Ottomans and Bulgarian guerrillas. In 1940 the Germans occupied Greece, and Edessa was among the regions in which Greek guerrillas put up the strongest resistance. 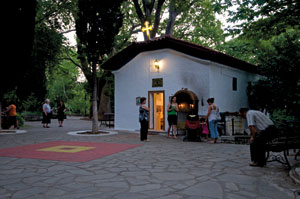 Edessa's churches are famous for the people who come to them rather than for their architecture, frescoes or mosaics. Every night, in keeping with Greek tradition, the locals finish their day with a stroll followed by a late dinner at a tavern. But they have preserved the custom of indulging in earthly entertainment after having said a short prayer at the chapel in the city garden. 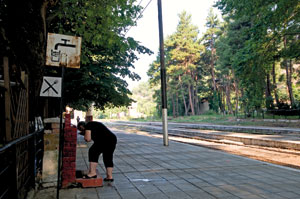 There's no need to buy a ticket to enjoy the charms of Edessa's train station. In the shade of old plane trees you'll find one of the city's best taverns. Don't be turned off by its unimaginative and unappetising name – Statmos, or Train Station. When you get tired of gobbling up juicy lamb chops and gazing out over the tracks, take a stroll along the platform and mingle with the passengers. Make sure to get a sip of water from the station's fountain. 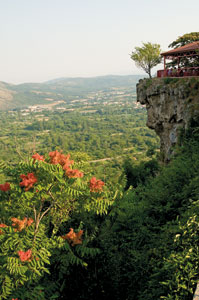 At every step you'll find signs more fitting for Amsterdam than for a conservative Greek town. They show the way to the Hemp Factory, but don't be misled – this isn't a Dutch-style coffee shop, but a former rope factory transformed into a nightclub. The name stems from the fact that the building lies at the foot of the plateau and there are only two ways to reach it. To use the glass elevator with transparent walls and floor, or to take the exhausting trip down the stairs – which becomes truly nightmarish when you imagine going back up.

It is located at the crest of the plateau, but the food is nothing to write home about – Greek salad and puréed eggplant lazily prepared. The service, however, makes up for this with a vengeance: it is the epitome of Greek tradition. Instead of forcing you to buy overpriced bottles of mineral water, waiters bring you glass pitchers filled with tasty tap water. Retsina, or the famous resinated white wine, is served in the classic tin jugs you won't find in overhyped tourist locations. The waiters also give a quick bow every time you order more ice for your retsina or more olives.