Haphazard tastes of the Farthest Land of the Setting Sun

For centuries Morocco has attracted poets, writers, travellers and adventurers in search of the exotic and the outlandish. It is an inimitable blend of North Africa, Islam and the developing world. However, in contrast to most other Arab states, during much of the second half of the 20th century Morocco sided with the West and the United States rather with the East bloc. Recently, Morocco stood out as the only Arab country not to experience any kind of "spring," meaning local politics and the local way of doing things have been preserved much as they used to be. With King Mohammed VI firmly in control, it is likely to remain that way for years to come.

It is also the only country in Africa that has access to both the Mediterranean and the Atlantic Ocean. Coupled with the fact that it is just a few of hours away from the major European cities, Morocco often provides the first taste of the Maghreb, or the Al-Maghreb al-Aqsa – the Farthest Land of the Setting Sun, as the ancient Arabs called it. And what a taste it is!

As my plane descends over Casablanca, the huge and largely modern metropolis sprawling out in all directions at the side of the North Atlantic, I keep looking down through my window. The huge minaret of the Hassan II mosque, the second largest in the world, stands out. Situated just by the water, on a promontory looking out west, it is a masterpiece of modern engineering. As it is within walking distance from Central Casablanca, a stroll down one of the several broad avenues leading to it is highly recommended.

In 20th century history, Casablanca has gone down as the location for the famous 1943 meeting between FDR, Winston Churchill, General De Gaulle and others, at which the Allies planned the next stage of the Second World War. Stalin declined to attend as the battle of Stalingrad was ongoing. German intelligence failed to obtain information about the exact location of the meeting, a failure that would cost Hitler the outcome of the war. There is an urban legend about that the German spies knew of the upcoming conference, but they didn't speak Spanish properly and consequently got the location wrong. They had thought the meeting would take place at The White House...

Casablanca is enshrouded in other myths as well, especially the omni-penetrating and everlasting myth of the 1942 eponymous movie. None of the actors participating in what is perhaps one of the coolest cult pictures ever set foot in Casablanca – or Morocco for that matter as it was shot entirely in Hollywood, but then there is hardly a movie goer anywhere in the world who wouldn't associate Rick's Café with Casablanca. Interestingly, no Rick's Café existed in town... until a few years ago when an American, Kathy Kriger, developed one. Now owned by – you would never guess – the Usual Suspects Company, it has become a landmark of its own. Set in an old courtyard-style mansion adjacent to the medina, it is equipped with an authentic 1930s Pleyel piano and As Time Goes By is a frequent request to the in-house pianist, called... Sam. 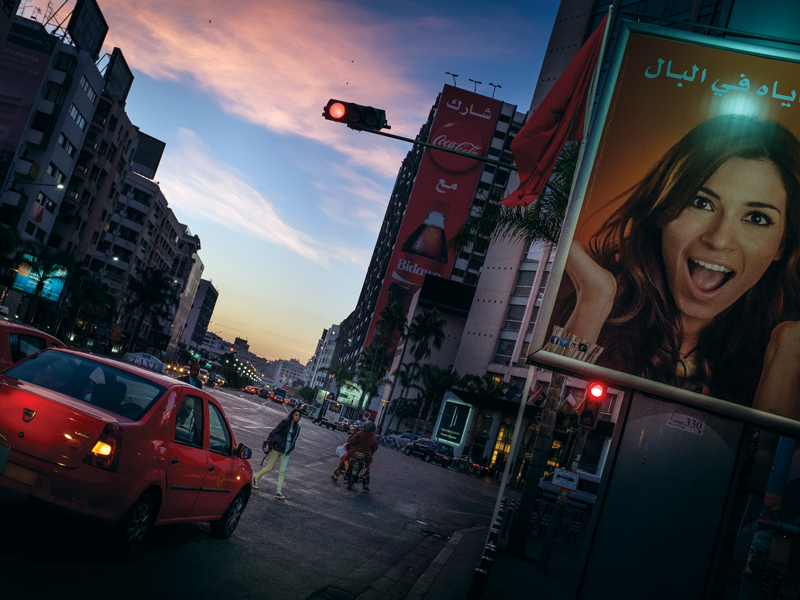 Casablanca is grand and extremely interesting, but don't linger on for too long as you may miss the "real" Morocco. Once you reach Marrakech, the "Pink City" in the High Atlas, you will know why. Get lost in the huge maze of souks and tiny lanes in the ancient Medina, visit the Saadian Tombs, spend half a day at the Majorelle Gardens, a cool oasis in the urban madness owned, since 1980, by Yves Saint-Laurent and his lover, Pierre Bergé. Part a botanical park and part an artist's retreat, Jardin Majorelle is a gem not to be missed.

For a completely different experience, head to the tanneries at the east end of Avenue Bab El-Dabbagh. Perhaps not as picturesque as the ones in Fez, the Marrakech tanneries are still a major introduction to the behind-the-scenes Arab world. Here you will see about an acre of dilapidated tubs full of cow's urine which is used to tan sometimes extremely smelly leather. Dozens of locals work the tanneries under the scorching sun every day, but you will probably need a gas mask in order to survive for more than a quarter of an hour. A cheaper alternative would be to employ a local guide to show you around. The guide will provide you with a "complimentary" bouquet of fresh mint sprigs which you are supposed to keep to your nose the moment you enter the tanneries. Don't take them away until you leave.

Marrakech's chief attraction, however, is the huge Djemaa El-Fna, one of the greatest squares in the world. In cultural terms it may be compared to Times Square in New York, Trafalgar Square in London, and Piazza San Marco in Venice. But of course this is Morocco. The plaza is packed with street-food vendors, musicians, dancers, clowns and storytellers who fill it with a cacophony of drum beats and excited shouts. Snake charmers, monkey trainers and women offering to do a henna tattoo will soon descend upon you. The highlight comes at sunset, when the imam of the nearby Koutoubia mosque calls to prayer. The whole square goes into an eerie calm, lasting just a couple of minutes. Then it again explodes into its usual din.

You cannot take in the whole of Morocco in one go and unless you try to, in which case you should consider Fez, Tangiers and the Sahara Desert, head to Essaouira, the perfect example of an 18th century fortified town by the waters of the Atlantic Ocean. The walled-in medina is not as large as Marrakech's, but equally or more interesting. Cannons line up the turreted walls and the tower by the port's entrance is telltale: Orson Welles shot his Othello, the Moor of Venice here. The great actor is honoured with a statue of himself, which miraculously gets vandalised every night by spraying paint on it. Curiously, each morning the local authorities have to clean it of a different colour of paint.
More recently, Essaouira was featured in The Game of Thrones, standing in for the fictional city Astapor. 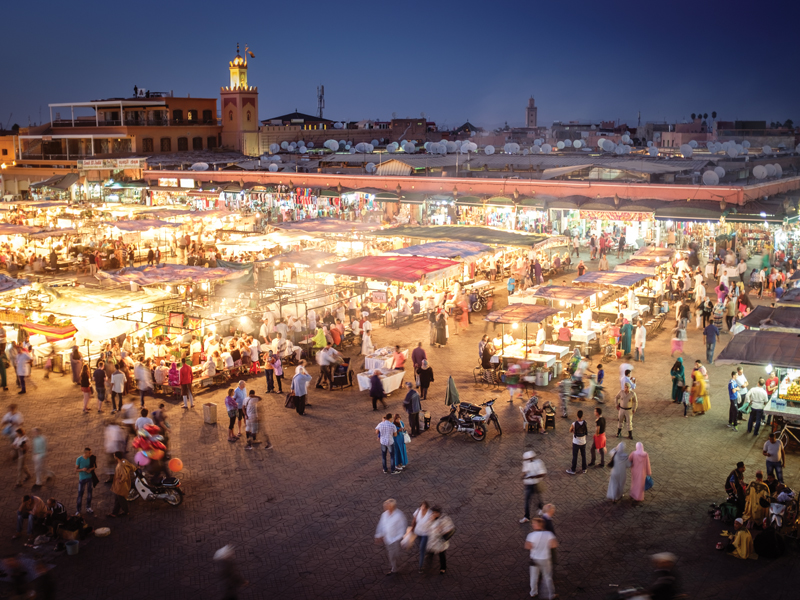 Djemaa El-Fna, Marrakech's central square ranks amongst the most atmospheric in the world

Nearby is Diabat, the home of an annual world music festival. Jimi Hendrix spent some time there. Consequently, the town's chief attractions are the Hendrix Castle in the sand and the Hendrix Café.

Essaouira amalgamates in itself Morocco's rich cultural and ethnic heritage. Spaniards, Portuguese and Frenchmen mingled with the local Arabs and Berbers, and the town was also a major Jewish settlement. Its modern-day craftsmen are renowned for their woodwork, lacquerware and jewellery. And around Essaouira there are the famous argan trees from which argan oil is handmade. Used in cosmetics and exported to Europe at ten times its local price, argan oil can also be used in cuisine. Dip your bread in it at breakfast or sprinkle over couscous or pasta at dinner.

Back to Casablanca and one last dinner at Rick's Café. As the fez-wearing waiters pour the champagne, I note an an old-fashioned TV set in the corner, loop-playing the actual film. By some inexplainable twist of fame, when I see Humphrey Bogart telling Ingrid Bergman to... go back to Bulgaria. 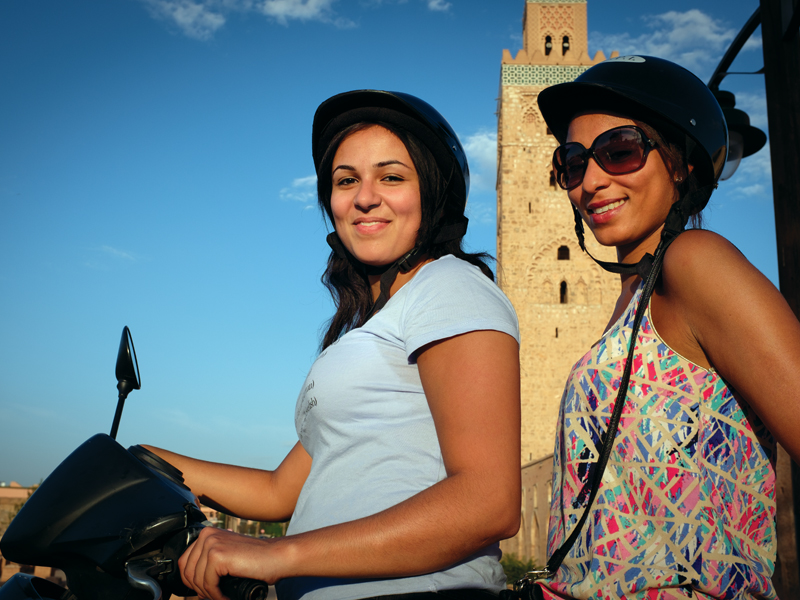 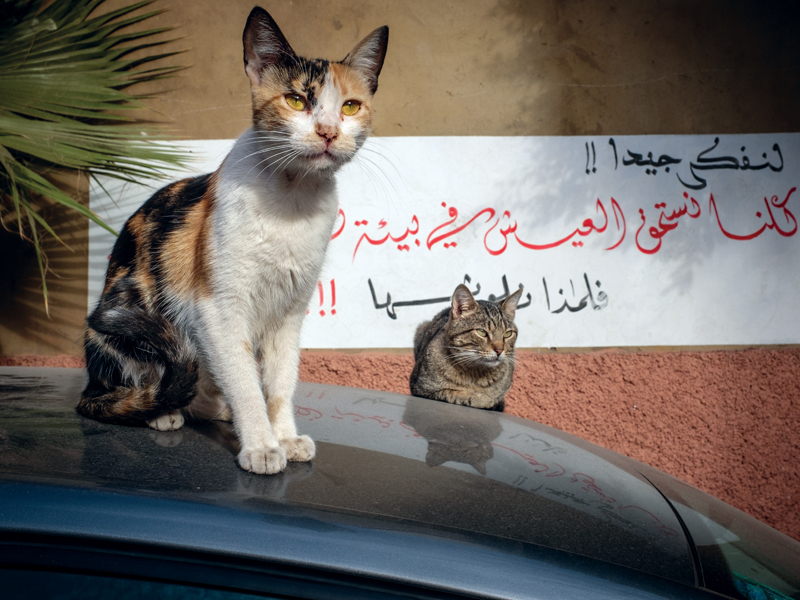 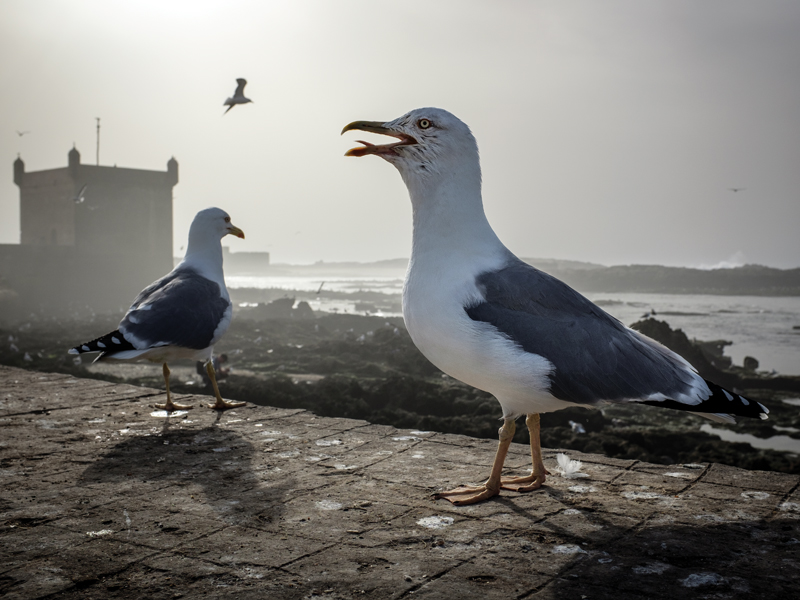 Essaouira's seafront fort is part Portuguese, part Spanish, part Arab. It was used for location shots of the 1952 movie Othello, The Moor of Venice 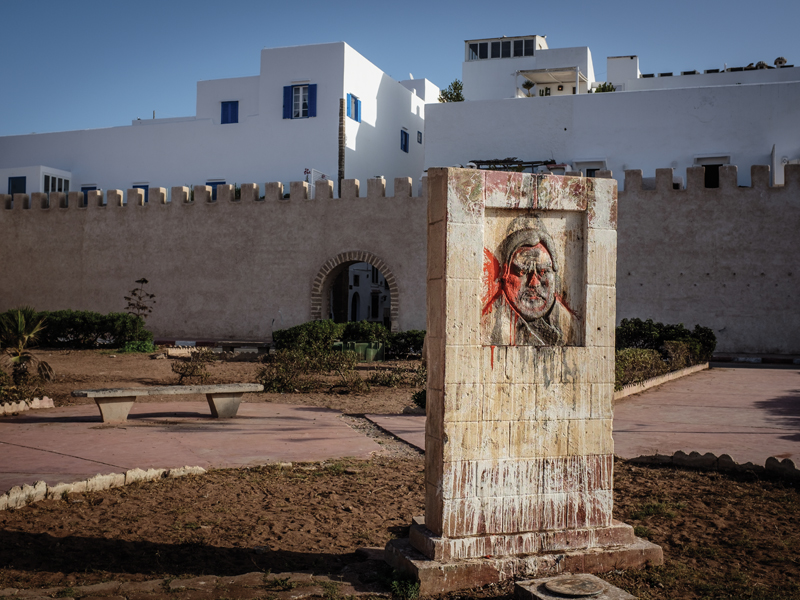 Orson Welles's statue gets defaced every night, always with a different colour of paint 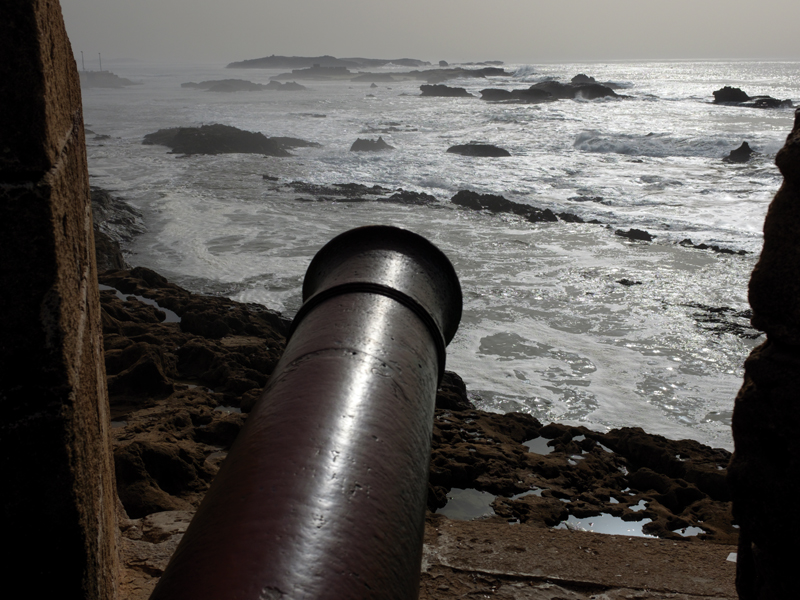 Cannons look out to sea at Essaouira's port 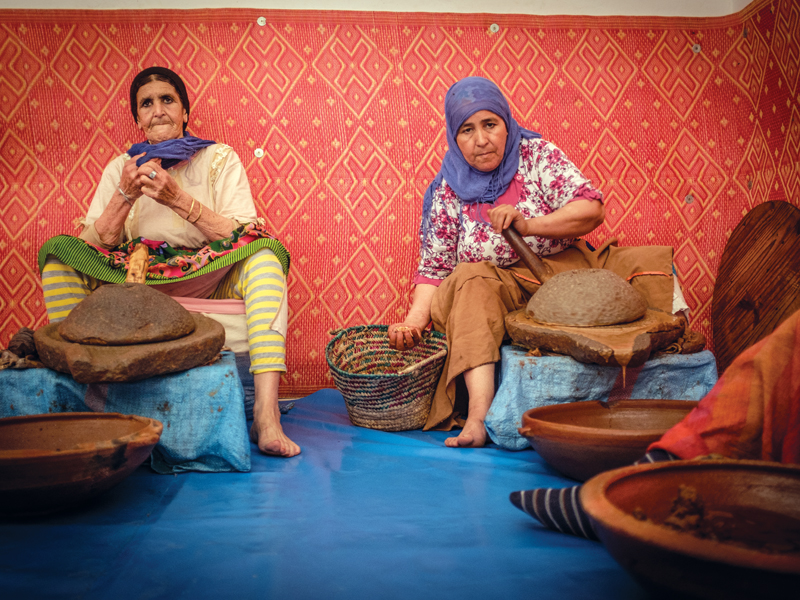 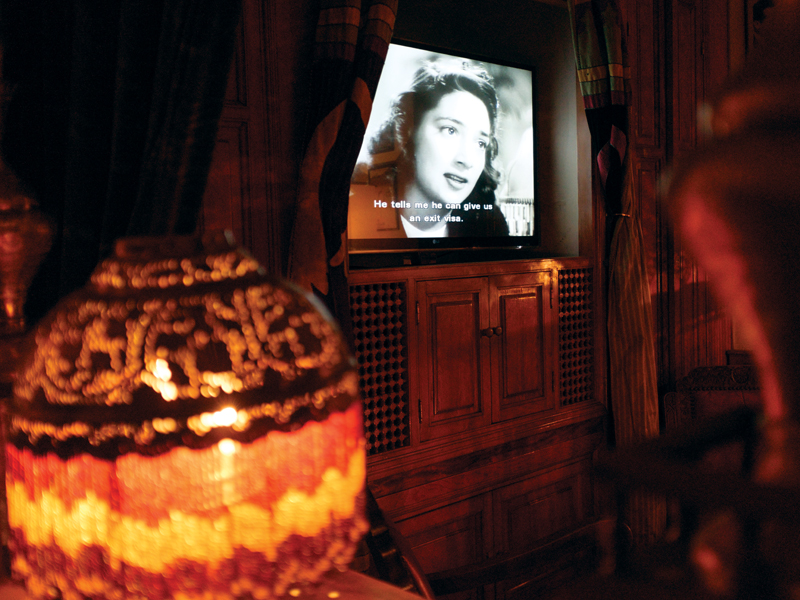 At Rick's Café in Casablanca