by Dimana Trankova; photography by Anthony Georgieff
Rate this item
(17 votes)
Piraeus, the Propylaea and Pompoms
If you've been to Athens at the height of the tourist season, you'll probably be hard-pressed to come up with even a single reason to visit the "cradle of democracy and Western civilisation." The rocky hills only intensify the August heat, the hordes of tourists make the narrow streets even more claustrophobic, and the bill you get at the overcrowded tavern is as big as your chances of slipping on the steps of the Propylaea, which have been shined smooth by centuries of visitors.

During the winter, however, there are far more than 10 reasons to visit Athens. The tourist population is reduced to a manageable size, the weather is mild, the taverns don't try to fleece you and you have more breathing space to discover the Greek capital's ancient and modern sides. One danger remains, however – stumbling at the Acropolis. This is an eternal problem that even a change of season can't solve. 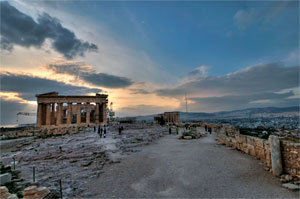 Every ancient Greek city had an acropolis – a hilltop fortified with strong fortress walls to protect the temple of the patron deity and the city treasury. Only Athens' Acropolis is written with a capital letter, however. The reasons for this go back 2,500 years. Athens won the Greco-Persian Wars, but the final siege of the city had left its acropolis – then still written with a small a – in ruins. In 460 BC the Athenian ruler Pericles, a renowned military commander, visionary statesmen and art connoisseur, began massive construction on the acropolis. His goal was to turn the hill into a grandiose – but not overbearing – demonstration of triumphant Athenian democracy. The construction coincided with the peak of a then-new trend in art, which we now call Classical Antiquity. Pericles commissioned the artistic crème de la crème of his day – the architects Ictinus and Callicrates, and the sculptor Phidias. The extravagant sums spent on the Propylaea, the Temple of Athena Nike, the Erechtheum and the Parthenon, as well as the two colossal statues of Athena, caused the first known corruption scandal in history. Yet the result was an unprecedented combination of stunning landscape, harmonious architecture, and striking sculptures and reliefs. The Acropolis continues to impress visitors, despite the Venetians' blowing up of the Parthenon in 1687, Lord Elgin's making off with most of the remaining reliefs in 1801 and the restorers' erecting their scaffolding around it 20 years ago. 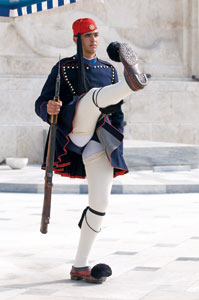 With their pleated skirts white stockings and pompom shoes, the Evzones guarding the Tomb of the Unknown Soldier in Syntagma Square are a favourite attraction for tourists, who snap photos of these elite soldiers and try to get them to crack a smile. Only 120 members of the Greek army – every one of them taller than 1.86 m, or six feet one – have the honour of donning the three-kilogram, or 6.6-pound, clogs and the splendid uniforms modelled on clothes worn by the klephts, rebels who fought in the War of Liberation against the Ottoman Empire. Each Evzone irons his own skirt, whose 400 pleats symbolise 400 years under Ottoman rule. In addition to this impressive domestic skill, the Evzones are also famous as highly trained warriors inculcated with the unit's legendary valiance. For example, in 1941 a German officer ordered the Evzone guarding the flag on the Acropolis to lower it and raise in its place the Third Reich's flag. Konstantinos Koukidis lowered the Greek flag, wrapped himself up in it and jumped off the Acropolis. During demonstrations in 2001 someoneset fire to one of the Evzone's sentry boxes. However, the guards did not budge until the officer on watch ordered them to move. The best time to catch the Evzones is on Sunday at 11:00, when they perform an entire show dressed in their most dazzling white uniforms.

Greece's third-largest city is so close to Athens that they in fact form a single metropolis linked by underground and the Leoforos Syngrou Avenue. Piraeus, located on a peninsula with three harbours, has always been more a part of Athens than an independent city. This mutual interdependence began in 478 BC, when Themistocles built the Long Walls connecting Athens and the ports. During the Middle Ages the only inhabited building in Piraeus was a monastery. However, people began returning to the port city in 1834 when Athens became the capital of newly liberated Greece. What is there to see in Piraeus? Definitely don't miss the harbour, which houses one of the largest merchant navies in the Mediterranean. 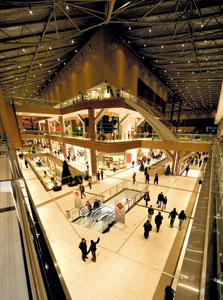 Five minutes amidst the enthusiastic, wildly gesticulating and shouting crowds at the antique market will convince you that Athenians love shopping. However, their shopping mania goes far beyond haggling over fresh ground beef and artichokes. The locals are slaves to fashion and hit the boutiques in the Kolonaki neighbourhood or brand-name stores on Ermu Street with a true passion. Malls have only recently appeared on the Athenian shopping scene, but they've already carved out their niche within it, and are expanding. Mall Athens, the first of its kind, and Attica Department Store, which is more like an extremely huge shopping centre, are already filled to overflowing. It's worth mingling with the shopping Athenians – for both the atmosphere and the bargains. After all, Christmas is just around the corner. 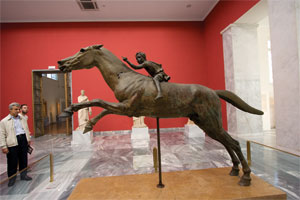 It is small enough to let you tour its collection in three hours, yet rich enough to contain some of the world's most striking cultural artefacts. The collections of the National Archaeological Museum include the golden Mask of Agamemnon from Mycenae; fragments of Minoan frescoes; marble Cycladic figurines; gravestones of long-dead Athenians; a life-size bronze statue of Poseidon that was fished out of the Mediterranean; the Antikythera mechanism, most likely used to calculate the dates of religious holidays; and a variety of other treasures. A trip to the building at 28 October St will make you feel like you've stumbled into a Discovery Channel film.

The 2004 Summer Olympics in Athens have long since passed and Beijing's Swallow's Nest has architecturally outshined the renovated Olympic stadium in the Maroussi neighbourhood. However, the Greek stadium has not become yet another dusty relic of the city's bygone glory. It continues to host clashes between the three titans of local football – Oplympiakos, Panathinaikos and AEK Athens – and provides a venue for mega-stars like Tina Turner, the Rolling Stones and Madonna.

Greece is the only country on the Balkan Peninsula where people get up early on Sunday morning, put on their best clothes and collectively go to church. The tolling of the bells and the festive groups of churchgoers on the streets – which are quieter than usual due to the laid-back Sunday traffic – give the megalopolis the look of a provincial town, at least for a few hours. Join them for the quintessential Greek Orthodox rite.

8. The Temple of Olympian Zeus 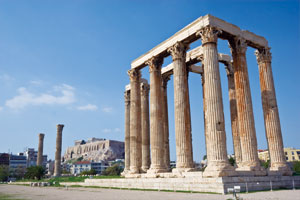 After the Tower of Babylon, the Temple of Olympian Zeus is one of the most striking monuments to human vanity in the world. In 520 BC the tyrants Hippias and Hipparchos began its construction with the goal of building the largest temple in the world. They both soon fell from power and Athens became a democracy, which shoved the megalomaniacal building project onto the back burner. Five-hundred years later, the Seleucid Emperor Antiochus IV, who believed himself to be a reincarnation of Zeus, restarted construction – but he, too, died before the temple was completed. Things changed after the Roman Emperor Hadrian paid a visit to Athens in 124–125 AD. A notorious admirer of Greek culture, the emperor finished the temple and installed colossal statues of both Zeus and himself there. He also added an arch that combined Greek and Roman architectural elements in a rather self-important way, bearing the inscription: "This is the city of Hadrian, and not of Theseus." The Temple of Olympian Zeus survived little more than a century. At the end of the 3rd Century the Herulians destroyed it, while later earthquakes and the Athenians' habit of using it as a convenient stone quarry quickly turned it into a picturesque ruin. Only 15 of its 104 gigantic marble columns are still standing – along with the arch. 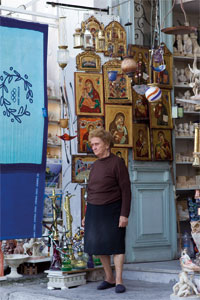 The Monastiraki neighbourhood lies along one of the most popular routes to the Acropolis – and it shows. Souvenir stands, little shops and immigrants take up every free bit of space. From them you can buy everything from leather sandals to fake silk shawls, grapes, rubbery tomatoes that you can bounce along the sidewalk, pirated CDs, "I Love Athens" tops, prayer beads,icons, paintings of Greek tavern scenes and tin retsina serving sets. For a more pleasant and less crowded Monastiraki shopping experience, go to the small Avsynnias Square. You'll find a flea market there, and if you like old spoons, embroidery, furniture and ouzo glasses, you can easily kill an hour or two there hunting amidst the junk: a truly Greek version of Portobello Road minus the gentrification. 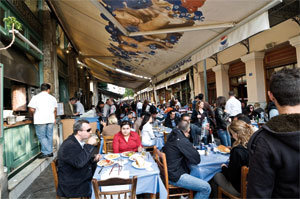 Spend some of your finest hours in Athens in an authentic tavern that hasn't changed its furnishing or its silverware since the 1950s – not to mention the menu. Diporto, located in the basement of an old warehouse near the farmers' market, is the best of the bunch. The 150-year-old tavern is saturated with the scent of fried fish, barrels of retsina, or resinated white wine, cigarette smoke, and the shouts of boisterous intellectuals, students and workers from the market. The owner, Dimitris Mitsas, usually serves up chickpea and bean stews, his own version of horiatiki salad with hot peppers plus the exceptionally good feta cheese, and – when he's in the mood – olives. Diporto closes at 6 pm, so it's best to catch dinner at Bayraktaris. This tavern seems too good to be true – despite its location in the heart of the touristy Monastiraki area, its relatively cheap but very generous gyros, kebabs and steaks have earned it a place in the hearts of both ordinary and eminent Athenians, whose photos line the walls.