The Middle Ages refuse to retreat in Greece's Mount Athos

Many means of reliving the past – historical reenactments, books or movies – rely on the strength of your imagination, but there is a place where an almost complete immersion in the Middle Ages is still possible.

This place is the monastic republic of Agion Oros, or Holy Mountain, in Greece. The lifestyle has hardly changed in the past 10 centuries, when the entry of women and female animals onto its territory was forbidden. Situated on the easternmost tip of the Chalkidiki peninsula, the monastic community is an easy one-day trip from Bulgaria.

Visiting is possible – if you are an adult male, have a visa and fit into the daily visitor quota – 100 Orthodox and 10 non-Orthodox Christians a day. To enjoy the experience properly you have to be the sort of person who does not mind going without a bath for three days, waking up while it is still dark for morning prayers, and having your lunch and dinner in the refectory an the appointed times, which are 10 am and 4 pm. The monks of Mount Athos measure their time in the Byzantine manner (the day ends at sunset, not midnight) and calculate their feasts using the Julian calendar, which has a 13 day difference to the one we use today. Food is vegetarian, with fish occasionally. Wine, however, is allowed.

Considering the privations a pilgrim should be able to withstand, a trip to restrictive Mount Athos holds the promise of many rewards.

Stretching 50 km into the blue waters of the Aegean, the narrow peninsula is a patchwork of precipitous heights and steep ravines, of picturesque coves, green forests and olive groves, topped with the majestic peak of Mount Athos (2,033 m). The landscape is awe-inspiring, even by Greek standards, but the greatest attraction of the peninsula is its monasteries.

These fortress-like buildings preserve one of the finest collections of Orthodox architecture, art and manuscripts in the world. Even non-religious visitors admit that the place had a palpable aura of sanctity, which haunts the old wooden porches of the living quarters and the dark churches. The ringing of the bells here is an experience which remains for life.

The rugged terrain of the peninsula was never good for making a living, save for migratory herdsmen, but in the first centuries of Christianity settlers had arrived. These were hermits seeking solitude. Slowly but steadily, their numbers grew.

After some time, a legend was born explaining the lure of Mount Athos as a place for quiet prayer. The Virgin Mary was on her way to Cyprus, the story goes, when strong winds blew her ashore the "pagan" peninsula. When she stepped onto firm ground and looked at the gorgeous scenery, she was smitten and asked her son if she could have Mount Athos as her personal garden. Mount Athos is still referred to as the Garden of the Mother of God. 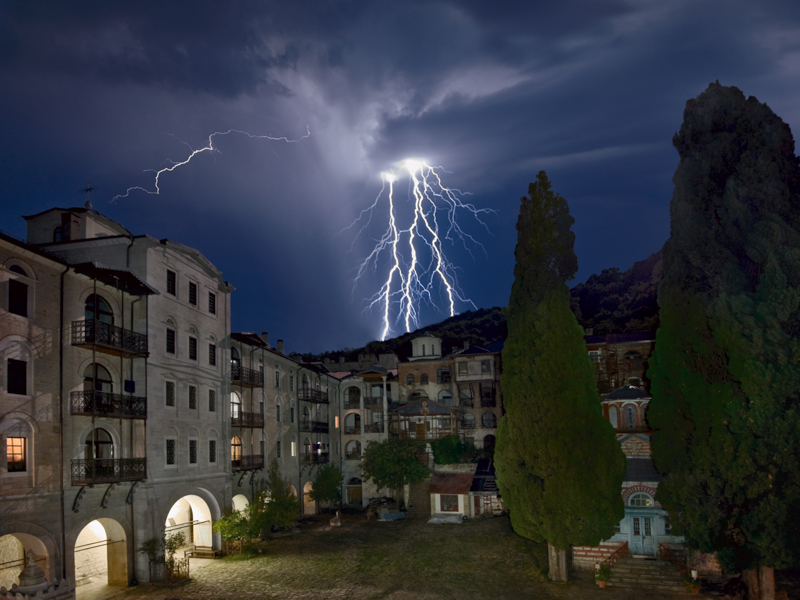 By the 9th Century, there were already monasteries on the peninsula and the government in Constantinople took action to regulate the community. In 885 Emperor Basil I issued a decree that only monks could live on Mount Athos.

Today there are about 20 monasteries on the Holy Mountain (the number is limited), and they all have a vote in the republic's governing body, the Iera Kinotitia. This self-styled parliament resides in the republic's only town, Karies. The city is inland and is connected with the outside world through the small port of Daphne.

To visit Agion Oros, you have to apply for a visa in the republic's office in Thessaloniki and, after several days, you have to collect your permit from another office, in Ouranoupoli, the last secular town before the republic. From here, you take the ferry to Daphne, and from Daphne you can travel inland (usually) on foot, or take another ferry which sails to the tip of the peninsula.
There are no hotels on Mount Athos, but every monastery will provide you with free bed and board. Spaces are limited, so you have to inquire well in advance.

Mount Athos is predominantly Greek-speaking, with 17 of its monasteries inhabited mainly by Greeks. In the Middle Ages, however, maintaining a national monastery in such a holy place was a matter of prestige for a number of Bulgarian, Serbian, Georgian and Russian kings and this is how the other three, non-Greek, monasteries came into being. 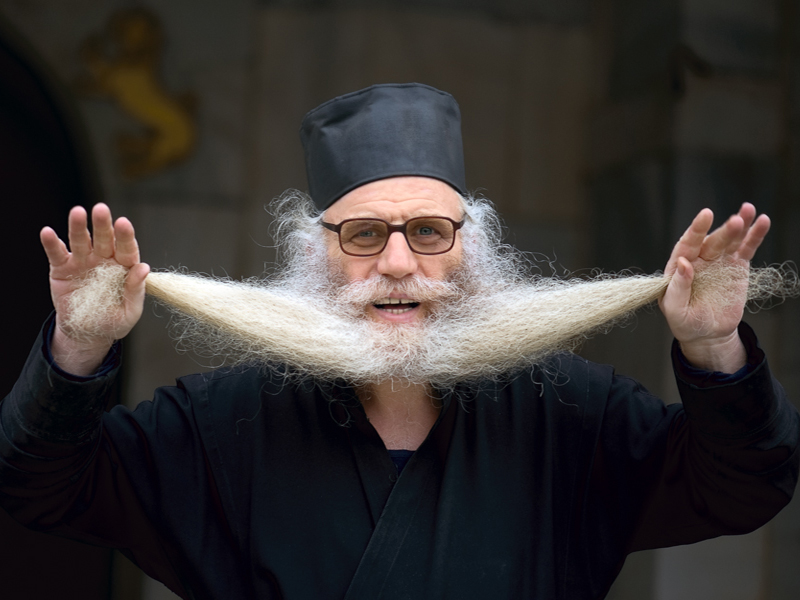 Bulgarian Zograph Monastery was established at the end of the 9th or the beginning of the 10th Century. The monastery's greatest treasure is a humble hand-written book; the original of Paisiy Hilendarski's Bulgarian history which, at the end of the 18th Century, fuelled the Bulgarian national revival. The book was written in another monastery on Mount Athos, Chelendar. In Paisiy's times it was Bulgarian, but it now belongs to the Serbian monks. Another non-Greek monastery is St Panteleimon, which is run by Russians.

Inspite of all traditionalism, modernity is creeping into this bastion of medieval lifestyle. Most of the monasteries now have computers and many have been turned into construction sites. Some of the new buildings look quite out of place. The most blatant example is the hostel of St Pantheleimon, which has the exterior of a resort somewhere on the Bulgarian South Black Sea coast (resort architecture in Chalkidiki is more subtle) and has nothing to do with the spirituality of Mount Athos, the Garden of the Mother of God.

A photography exhibition about Mount Athos will be displayed at the Sredets Gallery on Stamboliyski Boulevard in Central Sofia, 1 through 11 April. The exhibition, entitled Holy Mountain, is a part of the cultural programme of the Greek Embassy to mark Greece's EU presidency.