THE CALL OF THE SIRENS

Aliki beach, probably the best on the island © Anthony Georgieff

Once Thassos was inhabited by terrifying birds with women's heads whose songs lured sailors to sea rocks. But their magic has disappeared: now few Western tourists are familiar with one of the least-known Greek islands

The owner of one of the two taverns on the Aliki beach puts a second pitcher of retsina and a plate of yoghurt topped with Thassos honey on the table. Figs taken from the jam jar stick out from the yoghurt. "It's on the house!" he says and hurries off to clean the table that another jolly company has just left.

The paper table covers of the restaurant are of the recently trendy type – with a map of the island printed on them. From such a perspective Thassos looks small, traversable and familiar. Especially when you live in Bulgaria.

The Greek island that is closest to Bulgaria has several main advantages. If you start from Sofia, it will take the same time to get to it as it will take to reach Sozopol. It is cheap and quiet for a holiday. The crowds from Britain and the United States that have turned Rhodes, Crete and Mykonos into binge drinking destinations have not even heard its name. It is mainly Greek and Balkan tourists that come to enjoy its clean beaches. 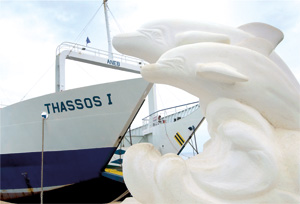 If you start from Kavala, the ferry will take you to the port of Skala Prinou. The island's other port is in its capital, Limenas

The Bulgarians make up a large part of them not only for practical but also for sentimental reasons. There is some evidence that the island was inhabited by the Thracians before they were ousted by the Greeks in the 7th Century BC. In the Second World War, the island was among the "new lands" administrated by Bulgaria; and Dimitar Dimov, one of the most widely read Bulgarian writers, described it enthusiastically in 1942: "Nowhere else have I seen more fabulously blue scenery, more peace, more quiet! Everything here is brimming with light and sultry azure, everything is bright and dazzling, albeit almost melancholically quiet," he wrote in Impressions From a Journey to Thassos.

You can go and look around Thassos within a day – by car on the road that passes all along the coast. The ancient ruins, the castle and the harbour of its capital Limenas take two hours to visit. Thus the beaches become the main place where to spend the long summer days. 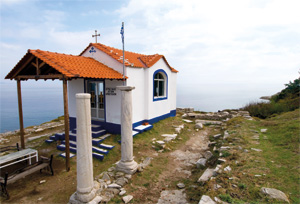 With such scenery, it is really astonishing how the ancient Greeks got the idea that Thassos was the island of the sirens. According to the Odyssey, the predatory birds with women's faces and breasts and seductive voices lured sailors to their destruction on the rocks they inhabited. Then they ate their bodies. Odysseus was the only man who heard their pernicious song and survived to tell about it. The hero made his crew put wax in their ears and keep rowing while he stood tied to the mast listening to their fatal song till he dropped from exhaustion.

Thassos is an unusual island. Thick forests untypical of the Aegean cover the slopes of the Ypsarion Mountain and have given rise to the hackneyed tag "the Emerald Island". But Thassos has more peculiarities to offer than just its forest.

Unlike their compatriots living on the hundreds of other Greek islands, the inhabitants of Thassos do not need the revenue from tourism to pay their water and electricity bills. For millennia, they have been trading with olive oil, thick aromatic honey and wine. The latter was so famous in antiquity that archaeologists have discovered hundreds of amphorae of it in the Mediterranean and along the coast of the Balkans.

However, the greatest treasure of Thassos lies underground, in the form of gold and silver ore. 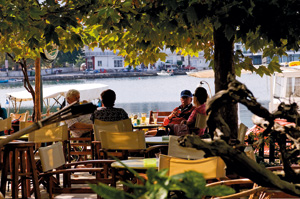 When you sit in a tavern in Thassos, look around carefully. You will probably find somebody from Bulgaria sitting at the next table

According to a rather radical theory, the first bullions on Thassos were produced 15,000 years ago. Most historians believe that the palm actually belonged to the Cretans. They came to the island 4,000 years ago and killed two birds with one stone. They mined gold and silver, on the one hand, and used Thassos as their base for a trade invasion of inland Thrace, going through the mouth of the Mesta River on the opposite shore, on the other.

The Phoenicians arrived 1,000 years later – again for the gold. They left only in the 7th Century BC, when they were displaced by Greek settlers from Paros. It is small wonder that the people coming from this Cycladic island known for its perfect marble discovered a hitherto unknown treasure of Thassos. It had wonderful marble.

Its production continues to this day, with some rather funny results. While travelling along the coast, you will come across a large exhibition area full of bold, though not particularly successful attempts at modern marble sculpture. If you happen to like something, you can buy the work of art on the spot. You can search the Internet too. The web abounds in sites that offer all sorts of things made from Thassos marble – from floor tiles to decorative reliefs. 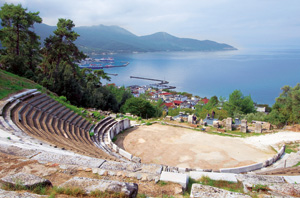 The ancient theatre of Limenas. Access to it is forbidden but there is a spot where you can easily jump over the wire fence. Everybody does it

The ancient Greeks remembered the complex economic history of Thassos by encoding it in a legend. Herodotus heard it and related it in his History.

Once, there was a Phoenician king. He had a fabulously beautiful daughter named Europa. Zeus saw the girl, liked her and, assuming the guise of a bull, abducted her to the Island of Crete. Grief-stricken, her father ordered his sons and his grandson Thassos to look for her high and low and not to return until they found Europa. Fate took Thassos to an island near the shores of Thrace. Exhausted from his fruitless quest, the young man decided to settle on this green, peaceful piece of land, which was later named after him.

The mines were the reason for the prosperity of Thassos – and for its fall too. An argument over the control of the gold mines on the opposite shore of the mainland made Thassos leave the Delian League of the Greek states. Theoretically, the confederacy was meant to protect them from Persia. Practically, Athens, which dominated the League, turned it into an instrument for political pressure and even moved its treasury from the Island of Delos to the Acropolis. 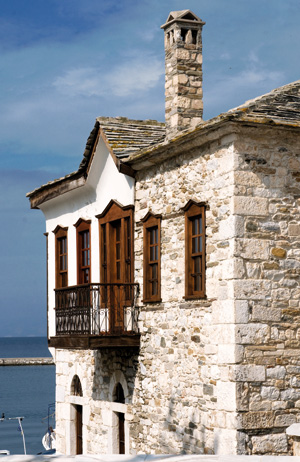 Traces of old architecture in Limenas. If you go in for original experiences, however, you should visit the hamlets inland. Their streets are the same as they were 200 years ago

Thassos was punished. After a two-year siege, the Athenians made its citizens demolish their fortification walls, destroy their fleet, turn over the contested mines to them and pay an excessive fine. Over the next centuries Thassos experienced a succession of ups and downs until, in the Middle Ages, it lapsed into a place where nothing interesting happened. It attracted attention only in 1813, when the Ottoman sultan gave it as a reward to the viceroy of Egypt Mehmet Ali for his help in the Greek War of Independence. The island was Egyptian until 1908, when the Young Turks regained control of it, and became part of Greece after the Balkan Wars of 1912–1913. 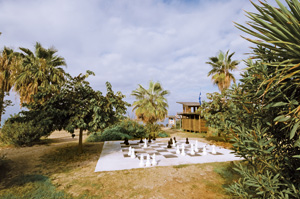 The natural resources and the punishment imposed by Athens account to an extent for one of Thassos' peculiarities. The island is known for its skilful boat builders, beaches and psarotaverna, or fish taverns. But most old villages are located deep inland. Occupying the slopes of the Ypsarion Mountain, with stone houses with slate roofs, they don't even face the sea. In their taverns you won't find fish or seafood but mountain specialities, such as roast lamb. Even the capital of Thassos was not Limenas, where its main harbour is, but the mountain village of Theologos. Legend has it that it was established in 1453 by refugees from Constantinople when it was taken by the Ottomans.

The only exception from the rule is Sotiras. This mountainous village affords a magnificent view of the sea.

Naturally, the sea is one thing and the island is another. The inhabitants of Thassos have never completely disregarded this rule, as can be seen from the Aliki beach. On the west end of the double bay the waves almost reach the ruins of two ancient temples. The east one has a small beach and two taverns which can hardly take all the people willing to try the sea, sand and sun of one of the least-known Greek islands. 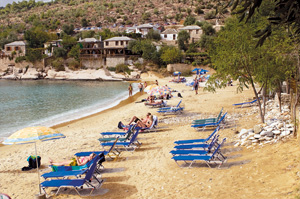 Aliki is probably the best-known beach on Thassos. But it is not the only one. You shouldn't miss Skala Potamias and its sand dunes on the east coast while its northern end is deservedly called Hrisi Amoudia, or the Golden Sand. Nearby are the only official camping site in the eastern part of the island and the bar of Mr Papafilippou. He is Greek to the marrow of his bones, but attracts customers showing off his resemblance to Eric Cantona. Loutrou and Makryamos Kiniron near Kinira are magnificent beaches for those who don't mind dirt roads, because they are the only ones leading to them. Astris occupies the southernmost tip of Thassos and the nearby Psili Amos attracts a lot of holidaymakers who want to ride Jet Ski. The beach of Potos is nearly a kilometre long and almost merges with Pefkari, which is surrounded by a pine grove. Tripiti is another excellent opportunity to get a suntan. The best beach on the west coast is Pachis.